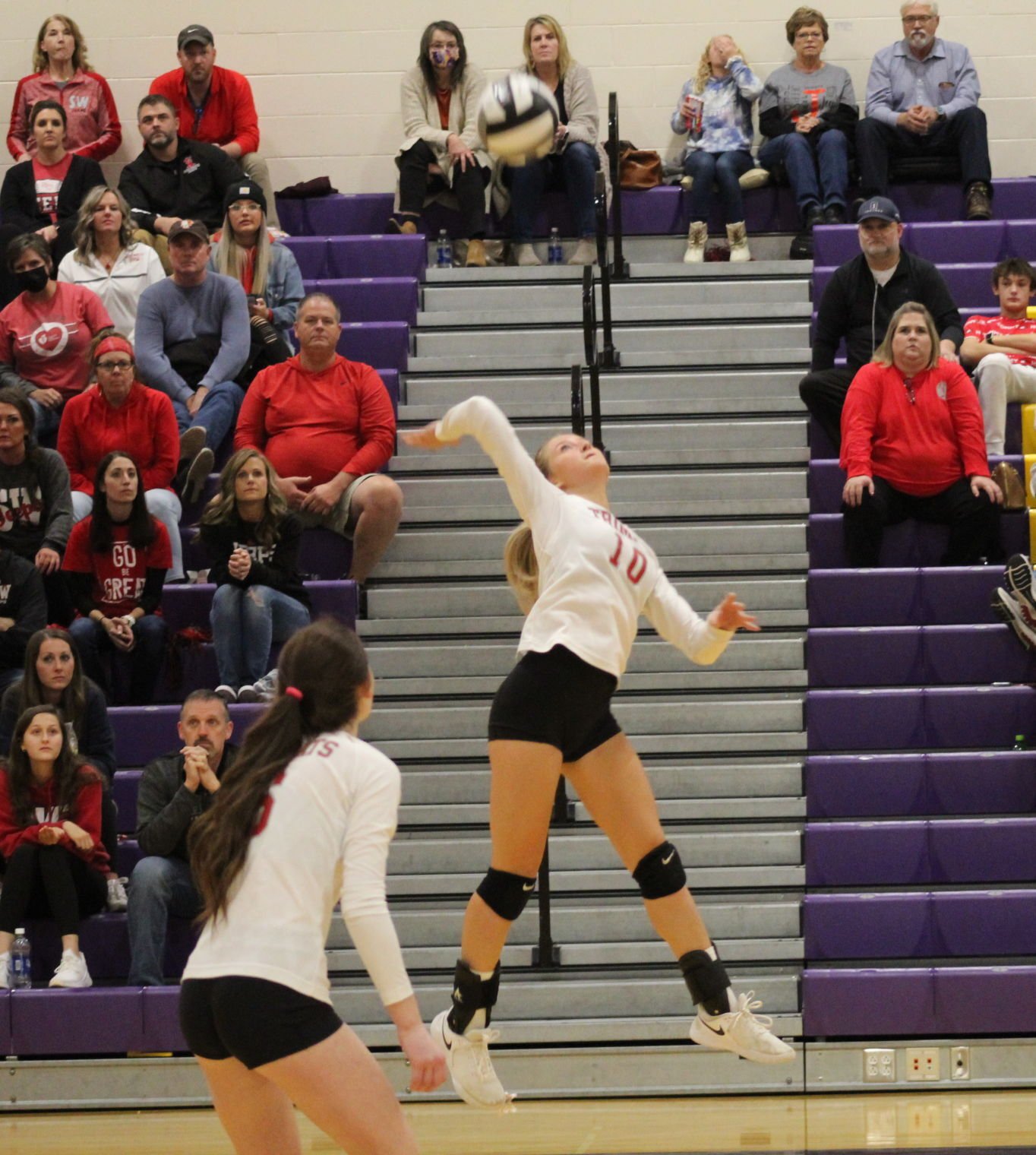 Trimble’s Laikyn Imler goes up for a kill in front of Faith Handley during Thursday’s regional semifinal at Bloom-Carroll Middle School. Imler had 20 kills, but Trimble fell to South Webster in four sets. 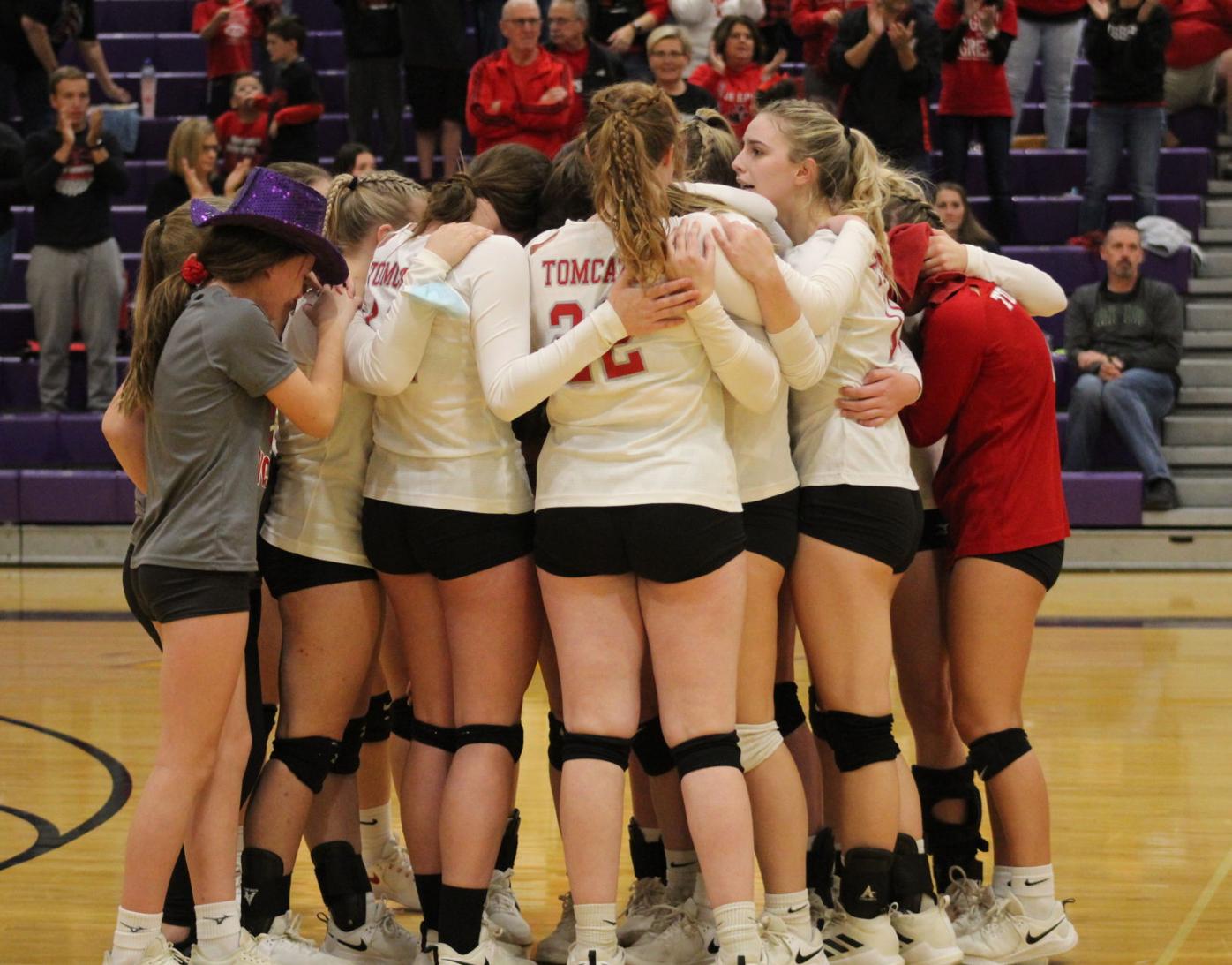 The Trimble Tomcats gather on the court after losing to South Webster on Thursday in the Division IV, Region 15 semifinals. The Tomcats finished the season with a 23-3 record. 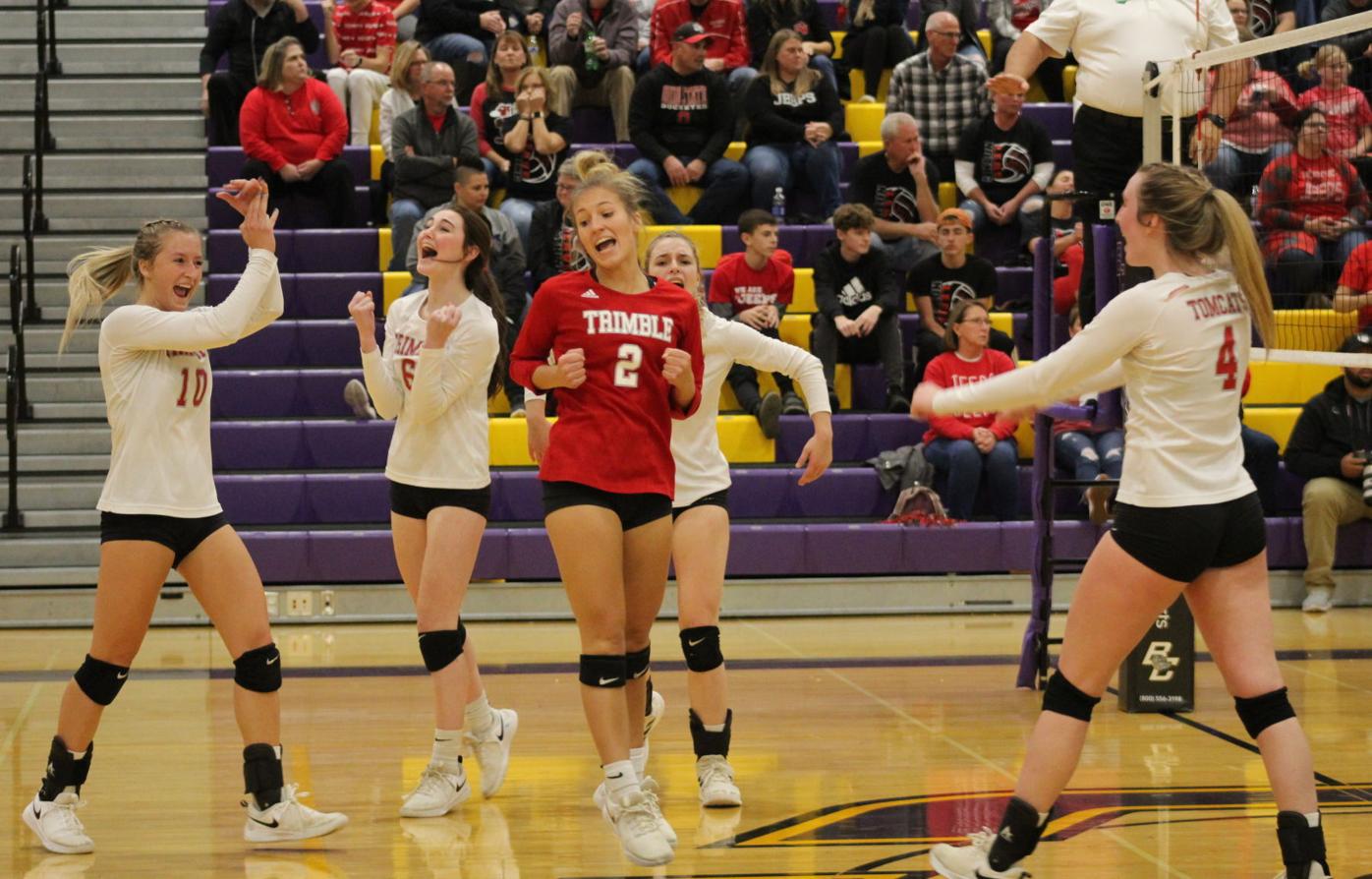 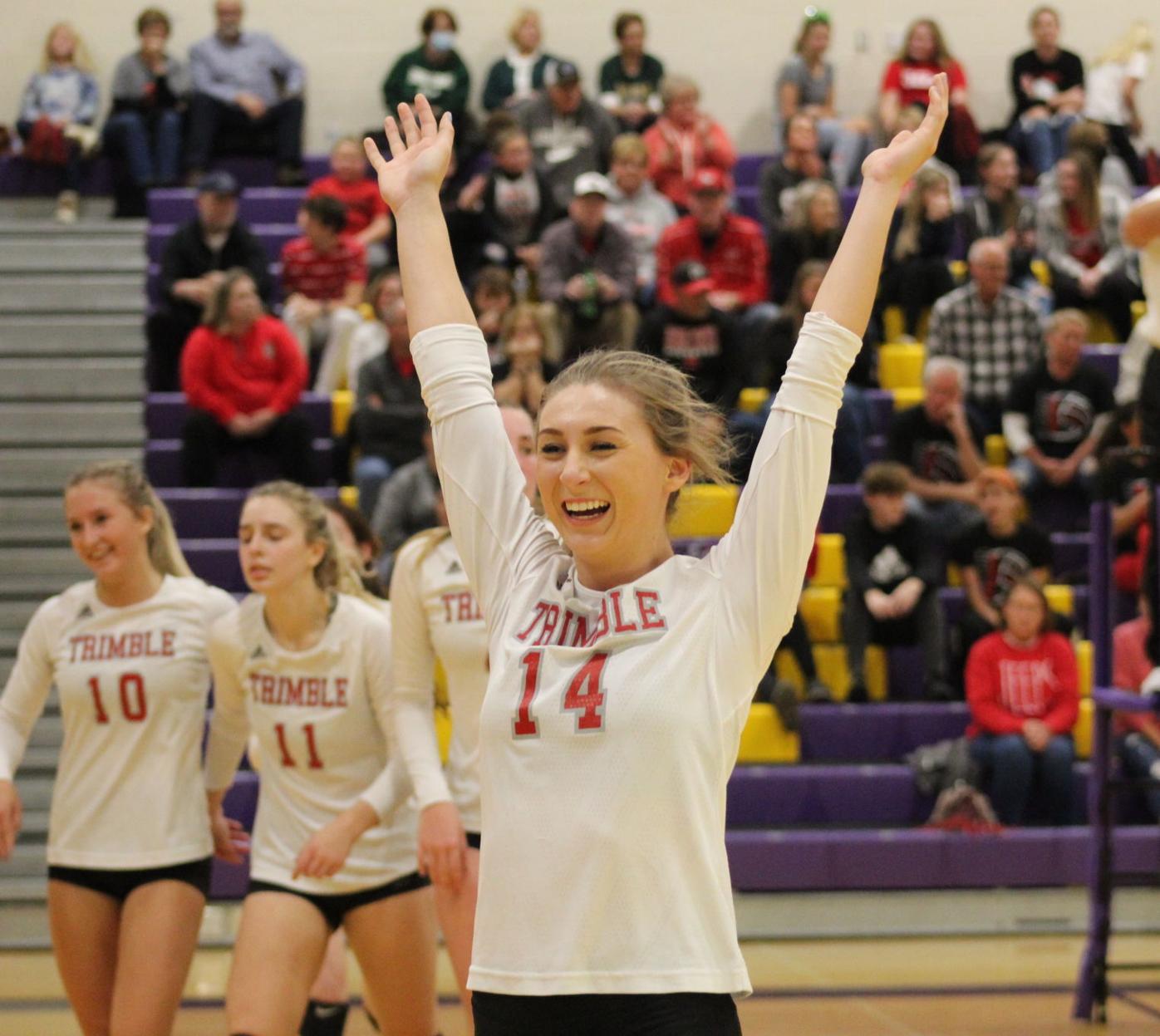 Trimble’s Laikyn Imler goes up for a kill in front of Faith Handley during Thursday’s regional semifinal at Bloom-Carroll Middle School. Imler had 20 kills, but Trimble fell to South Webster in four sets.

The Trimble Tomcats gather on the court after losing to South Webster on Thursday in the Division IV, Region 15 semifinals. The Tomcats finished the season with a 23-3 record.

CARROLL — After countless celebrations on the court after big points and decisive victories, the Trimble Tomcats gathered together one final time at Tom Petty Gymnasium at Bloom-Carroll Middle School.

Although this time, the Tomcats were picking each other up after their season suddenly came to an end.

Even in defeat, the Tomcats (23-3) were still sticking together in the immediate aftermath of a difficult loss to the Jeeps.

South Webster (24-1) won a five-set thriller in Glouster in the regular reason, and had enough to hold off the Tomcats in the rematch.

“It was incredibly hard,” South Webster coach Darcee Claxon said. “Trimble did not quit. They just would not go away and credit to them. Those girls have heart, they have grit. Coach (Shelly) Lackey has done a phenomenal job with them.”

The Tomcats certainly battled to the end, as eight seniors concluded their decorated volleyball careers.

The Tomcats tried to stage one final comeback against the Jeeps. Trimble lost the first two sets by scores of 25-19, and had their season on the line going to the third set.

Trimble was slowly able to gain some momentum back, going ahead 14-10 after Briana Orsborne’s kill, and 17-14 after Imler’s kill.

The Jeeps got to within two points at 24-22, but Campbell’s final kill gave the Tomcats the win, extending the match into a fourth set.

The two volleyball powerhouses went toe to toe in the fourth set, the crowd at Bloom-Carroll hanging on each volley.

It was the seventh time in the set the score had been tied, but Trimble never led.

That changed on Imler’s ace. South Webster called a timeout, the Tomcats leading 21-20 and closing in on a fifth set.

South Webster rallied back though, tying the score on a Trimble net violation, then going ahead 22-21 on Briana Claxon’s kill.

The Tomcats called for their final timeout, and would come back to tie the score 22-22 on a South Webster error.

Trimble was guilty on a service error, then a block at the net allowed South Webster to lead 24-22.

The Tomcats battled back to within 24-23 after a Jeeps’ attack error.

The match ended on the next volley. South Webster setter Isabella Claxon tried to dump a kill across the net. The Tomcats were caught out of position defensively, and the Jeeps got the final point to advance to the regional finals.

“They threw it to the left,” Trimble coach Shelly Lackey said. “We were out of position for that. It was a weird play.”

The Jeeps celebrated their victory on one side of the net, while the Tomcats gathered on the other.

Lackey and Claxon greeted each other immediately afterwards, and Trimble’s coaches all went to congratulate South Webster’s players at the net.

South Webster advances to Saturday’s regional final, back at Bloom-Carroll against Newark Catholic.

The Jeeps were led by Briana Claxon and Faith Maloney. Claxon had 21 kills, Maloney 19 kills.

In the team’s first meeting, Maloney was held to 11 kills. The 5-foot-11 senior found more openings offensively in the rematch.

Lackey said the Tomcats didn’t do a good enough job overall blocking at the net against the Jeeps’ offensive weapons.

“We got a little bit busy trying to do other people’s jobs,” she said. “So when the ball is on the other side of the floor, the biggest thing you have to do with blocking is get a seal. I think we had five blocking errors in a row at one point.”

Imler led the Tomcats one final time in kills, registering 20 while adding three aces. She had 12 of those kills in the final two sets to help give Trimble a chance at the comeback.

The Tomcats came out on fire to start the match, scoring the first five points. They had leads of 11-5, 12-6 and 14-9 before the Jeeps came back.

Trimble led 18-15 before South Webster scored five points in a row to take the lead.

The Tomcats couldn’t slow down the momentum, dropping the first set 25-19 as the Jeeps closed on a 10-1 run.

South Webster carried that momentum over into the second set, leading 9-1 and never looking back in taking the 2-0 lead in the match.

The Tomcats were able to regroup from there, the deficit ultimately proving to be too much.

The season came to an end too soon for the Tomcats, who had aspirations of breaking through in the regional semifinal round.

“This team, they are fun to coach,” Lackey said. “They are fun to have at practice. Everything about them, these eight seniors are the most special group of seniors.”