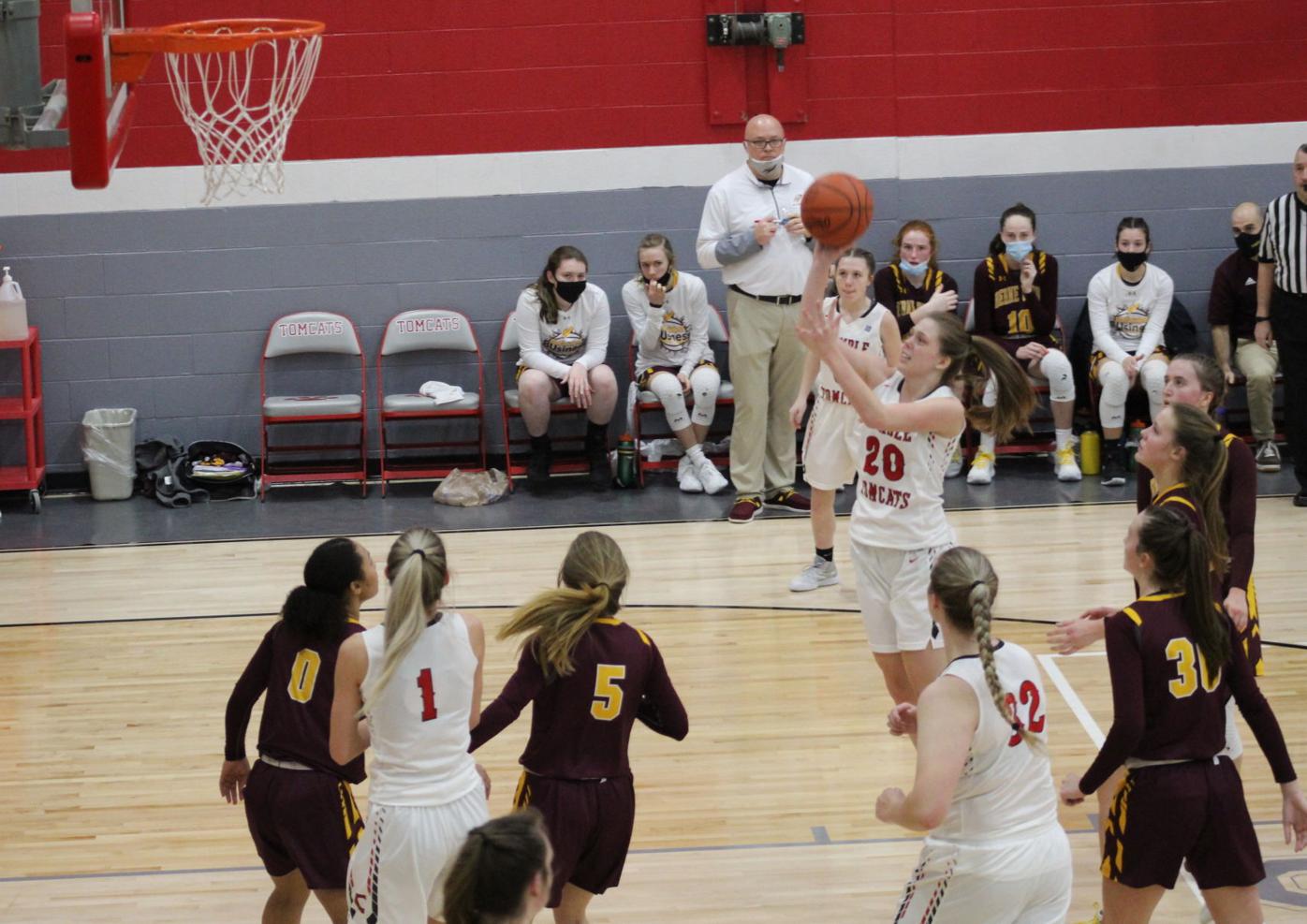 Trimble’s Emily Young (20) puts up a shot in the lane on Wednesday against Berne Union. Young had 16 points, but Berne Union took the 51-50 victory. 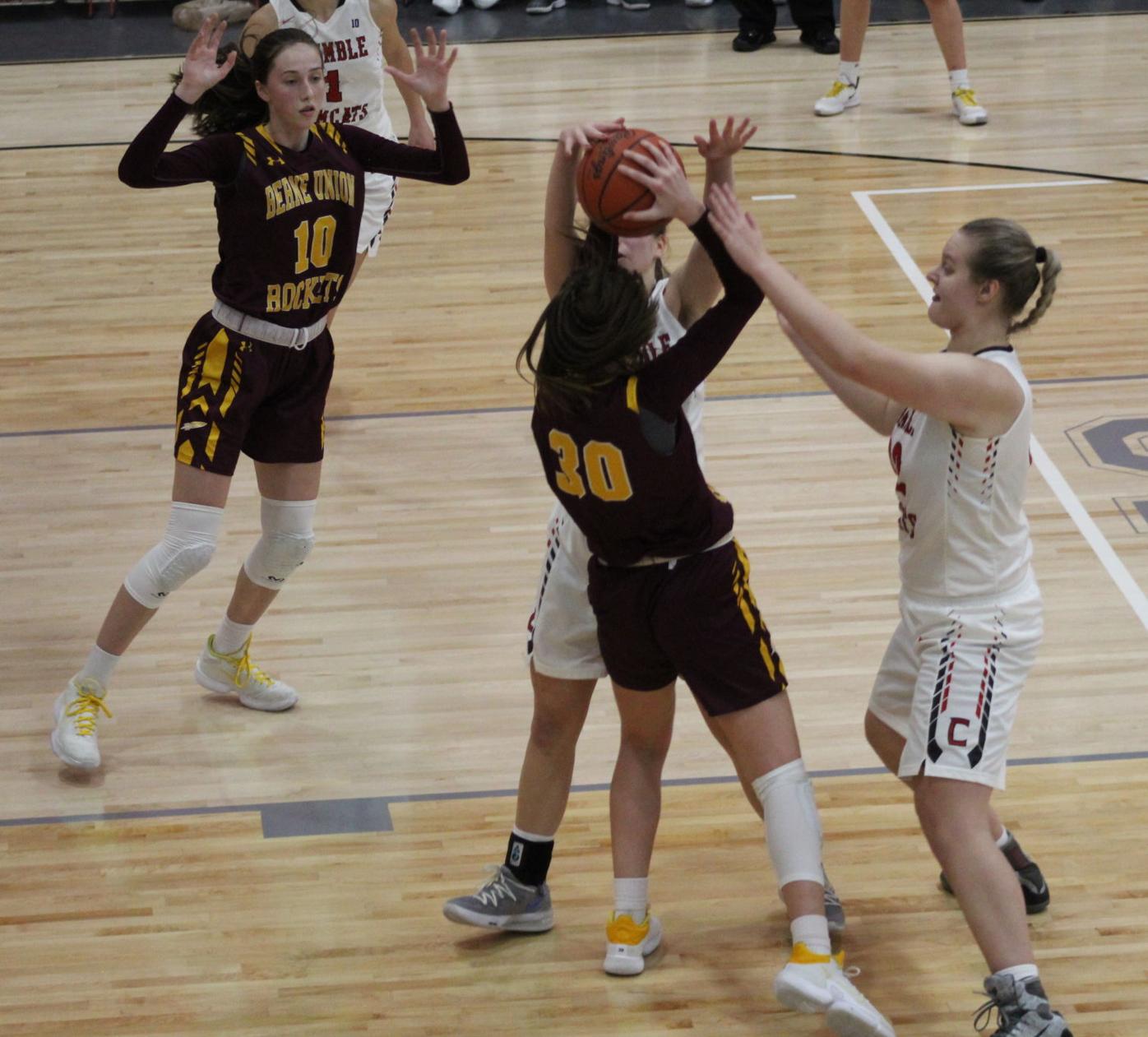 Trimble’s Emily Young (20) puts up a shot in the lane on Wednesday against Berne Union. Young had 16 points, but Berne Union took the 51-50 victory.

GLOUSTER — Trimble coach Joe Richards said there was nothing left to do but pray.

Bella Kline made sure those prayers went unanswered.

Kline, Berne Union’s standout senior, hit a breathtaking buzzer beater on Wednesday, as the Rockets stole a 51-50 victory away from Trimble inside White Gymnasium.

The game was billed as a clash between state-ranked teams in Division IV, and it lived up to the hype.

The back-and-forth battle ended with the ball in Kline’s hands. With the Tomcats leading 50-48, the Rockets inbounded the basketball in front of their bench with 5.5 seconds on the clock.

The ball was inbounded immediately to Kline, but Riley Campbell was in position to initially gum up the Rockets’ play.

“We were trying to get maybe some confusion on their part, which they didn’t really go for,” Berne Union coach Matt Little said. “But we wanted to get it to Bella. If we’re going to win or lose with somebody taking a shot, we want to get it to Bella.”

Kline passed the ball back to Emily Blevins, who initially had the inbound pass.

When Blevins tried to make a move on the right wing, a trio of Tomcats were waiting for her.

“It looked like whatever they drew up, we stopped,” Richards said. “We stopped the original motion.”

When Blevins attempted her drive, Kline retreated deep behind the 3-point line.

Blevins turned and passed the ball back to Kline. She put up a shot in front of the Rockets’ bench, at least 30 feet from the rim.

“I looked up at the clock real quick and I knew she’d be able to get it off,” Richards said. “I tried to say the fastest prayer of all time. We had a perfect vantage point and it looked like it was dead on.”

The ball splashed through the net at the exact moment the buzzer went off.

Kline pumped her fist and stomped on the court, her teammates eventually knocking her to the ground in celebration.

“We didn’t want it as deep as it was, but she can make that,” Little said. “I wasn’t shocked when it went in. You give her credit. She made the play. She made the shot. I can’t take credit for that one.”

Kline was a first-team all-Ohio selection in Division IV a year ago, and is a career thousand-point scorer.

The Tomcats and Campbell held Kline to 13 points on 4 of 10 shooting, but at the end of the night could only tip their cap to the Rockets’ leader.

“It’s just a hard one to swallow,” Richards said. “She’s a good player. We knew that coming in, and I thought we did a very good job on her with Riley for the most part.”

It was Trimble that controlled the game most of the way. The Tomcats never trailed through the first three quarters, and led 41-31 after Briana Orsborne opened the fourth quarter with a corner 3-pointer.

The Rockets responded with a 17-4 run, taking their first lead at 46-45 with 3:17 to play when Bella Kline found her younger sister Sophia Kline in the paint for a layup.

“We couldn’t get a stop for the longest time. Sophia Kline I thought stepped up in the fourth quarter a little bit offensively. We got a few stops,” Little said of the comeback.

The two Division IV titans went back and fourth over the final few minutes. Sophia Kline put the Rockets ahead 48-45 when she scored after a rebound and assist from Bella.

The Tomcats had their backs against the wall, but fought back to force a 48-48 tie when Jayne Six made two free throws with 1:18 remaining.

Trimble’s defense gave it a chance to take the lead. Campbell stood in and took a charge — a play that denied what was going to be an open 3 for Bella Kline — giving the Tomcats the ball back with 31.1 seconds to play.

Trimble was playing for the last shot of regulation, but Six hit Orsborne with a perfect pass when she flashed to the rim.

Orsborne made the shot, giving Trimble the 50-48 lead.

“All of a sudden, you see a fireball just fly through the lane,” Richards said. “Jayne makes a great pass. Briana’s girl fell asleep and she finishes.”

The Rockets brought the ball past mid-court and called timeout with 5.5 seconds left, eventually setting up Bella Kline’s game-winning bomb.

The Tomcats won at Berne Union 50-49 a year ago. They were in search of another signature non-league win against the Rockets, and were a single long 3-pointer away from accomplishing just that.

“You have to tip your cap,” Richards said. “Our defense was pretty good. Obviously, we don’t want to lose 30 (Kline), but I think 11 (Campbell) got tangled up a little bit on that. But it’s hard to complain about defense when she hits a 30-footer.”

The Tomcats won the rebounding battle in a big way, 40-22, but were guilty of 22 turnovers. The Rockets struggled at the free throw line, making 7 of 19, but only had 12 turnovers.

“To be honest, I thought we got outplayed most of the night,” Little said. “I feel fortunate to get out of here with the win. They’re really good, and they kind of controlled the whole night. I’m a little bit in shock, because I thought we played poorly for 80 percent of the game, but proud that we were able to fight and find a way to win.”

After hosting Southern on Thursday, the Tomcats will have another big challenge on Saturday. Trimble is scheduled to travel to Fairland, where it will face Portsmouth Notre Dame at 10 a.m. in the Tri-State Throwdown.

Notre Dame is an annual contender for district titles in Division IV, but also lost to Berne Union earlier in the season.

It will be another measuring stick game for the Tomcats against one of the top teams in the area.

“We talked to the girls about it, this is why we schedule these games,” Richards said. “To get ready for February and March. Who knows? We may see them (Berne Union) down the road (in the regional tournament).”