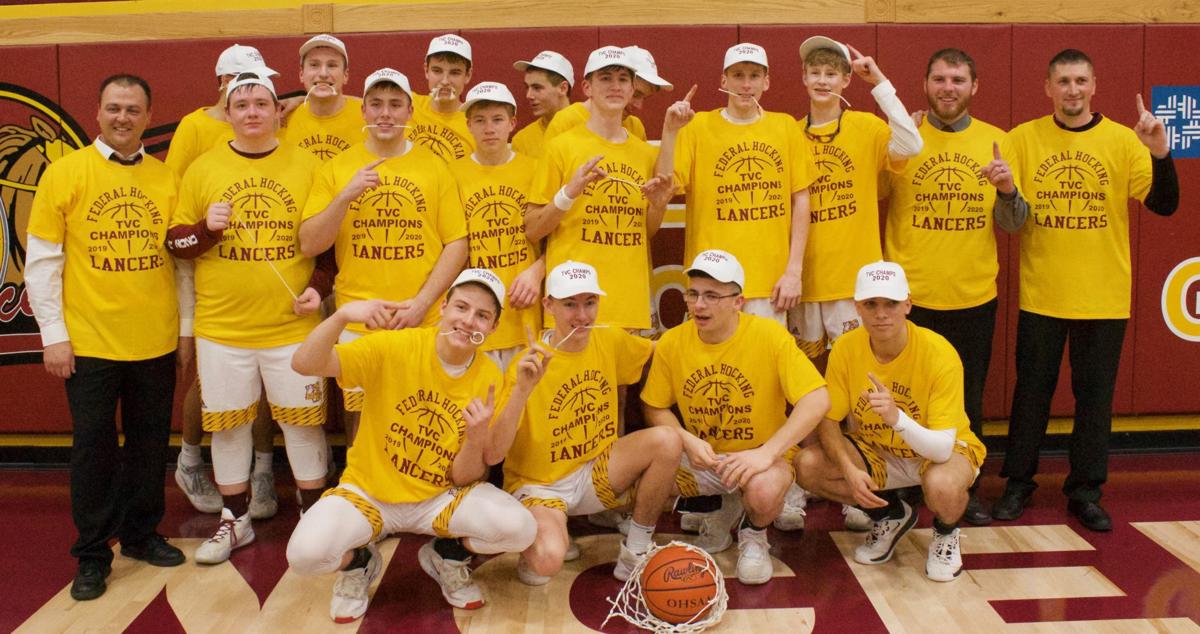 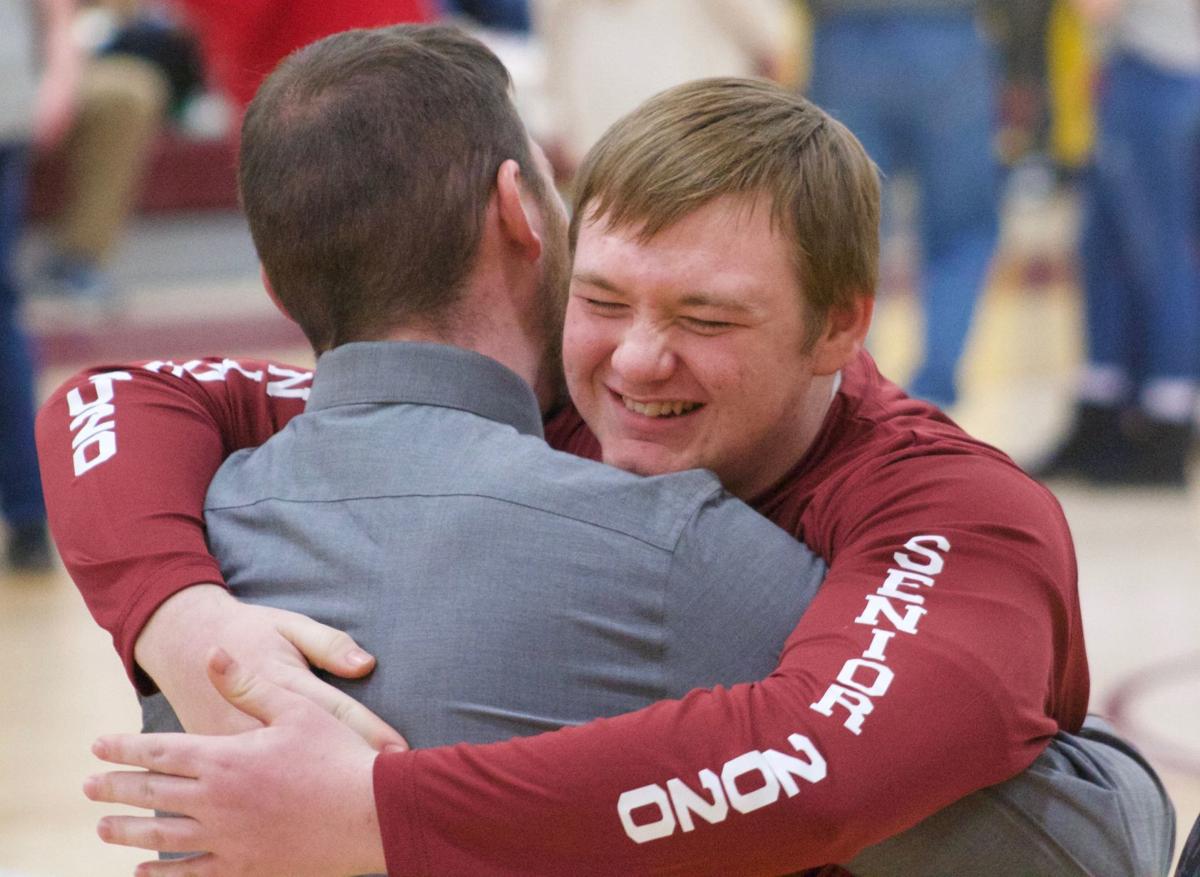 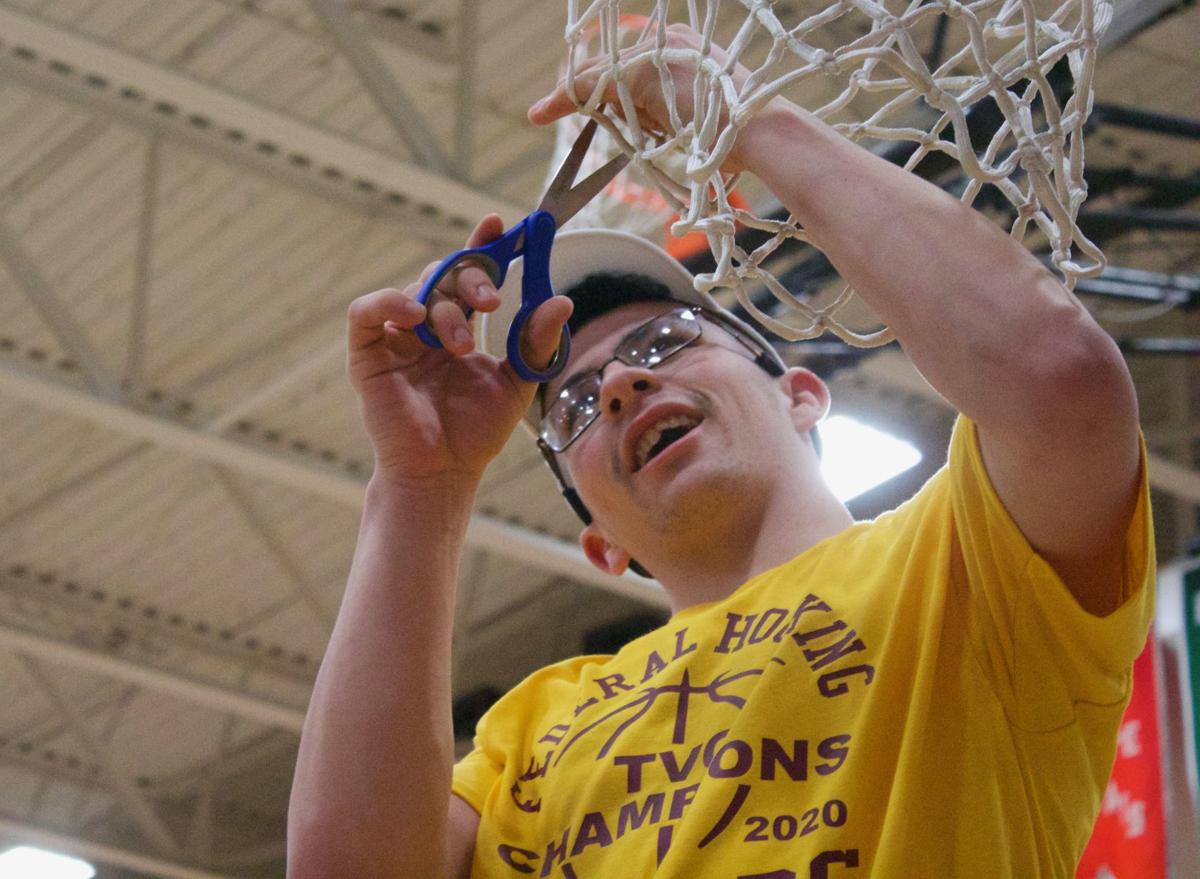 Federal Hocking senior Quinton Basim cuts his piece of the net after the Lancers claimed the outright TVC-Hocking championship on Friday, Feb. 14, 2020 in Stewart.

Federal Hocking senior Quinton Basim cuts his piece of the net after the Lancers claimed the outright TVC-Hocking championship on Friday, Feb. 14, 2020 in Stewart.

STEWART — Quinton Basim has heard all the jokes, all the naysayers.

So now, on this night, when the Lancers had come full circle, you’re damned right he was going to be the first one up that ladder.

Federal Hocking capped the 2019-20 regular season in style on Friday night inside (again fully packed) McInturf Gymnasium with a 77-53 runaway win over South Gallia. The Lancers, 0-23 just three seasons ago, have been reborn as Tri-Valley Conference Hocking Division champions.

“It’s just hard to believe,” said Basim, the first Lancer up the ladder to cut down a strand of the net. “ My freshman year we were 0-23.

“To be cutting down the nets with the same boys that had that 0-23 season, it’s just a hard picture to even think about.”

There’s no thinking about it any more. The Lancers (18-4, 15-1 TVC-Hocking) claimed their 13th solo TVC title in program history on another game-night that turned into a celebration.

Federal Hocking has won three in a row overall, but won their final 10 league games to claim the championship over two-time defending champion Trimble.

‘We are the Champions!’ — the staple for these occasions from rock band Queen — blared to decibels unsafe for normal consumption. The Lancers bounced and bobbed, like 5-year olds on a sugar rush, waiting for their turn to cut down a keepsake from the rim. Every one of them wore t-shirts and ball caps commemorating the title, the turnaround, and a season few expected.

The Lancers won 0 games three years ago. But Federal Hocking won just eight games, combined, over the last two seasons. And now they’re the Hocking champs with a record few teams in program history ever reached.

“This was a goal we wanted to try to accomplish this year and they got it done.”

The Lancers got it done, together. With seven seniors on the roster, Thompson started five of them on this night, but that meant three regular starters were left on the bench.

Basim led that initial charge. As part of the starting lineup, he opened the game with a steal and a layup. He had eight points and two assists in the game’s first three minutes. Starting alongside fellow seniors Brandon Bond, Terrell Mayle, Ian Miller and Dylan Schwarzel, Basim wasn’t going to let anything spoil the Lancers’ night.

“Having a chance to do it with a group of seniors that I was able to do it with…I took it upon myself to lead them in cutting down these nets,” Basim said.

The Runnin’ Rebels, led by Brayden Hammond (17 points, four steals, four blocks), hung around for a while, and pulled to within 26-23 in the second quarter. But the Lancers erupted for a 14-0 run and blasted into halftime with a 50-28 lead.

The Lancers’ sense of togetherness had never been stronger.

“We talked and talked about having each others back, building a brotherhood, playing as a team on the floor and they truly have come together,” Thompson said.

The Lancers played with energy, enthusiasm and effort. And even though the crowd was having a great time, seeing a championship come back to Stewart after years of losing records and dismissal, no one was having as much fun as the players on the floor.

From winless to champions. From the no one showing up for games, to no empty seats in McInturf. The Lancers started out, four seasons ago, as low as you can possibly be. And now, no one is enjoying Friday nights more than they are.

“We sure don’t want this thing to end,” Thompson said. “We’re having a ball.”

“It’s nothing but love for our brothers.”