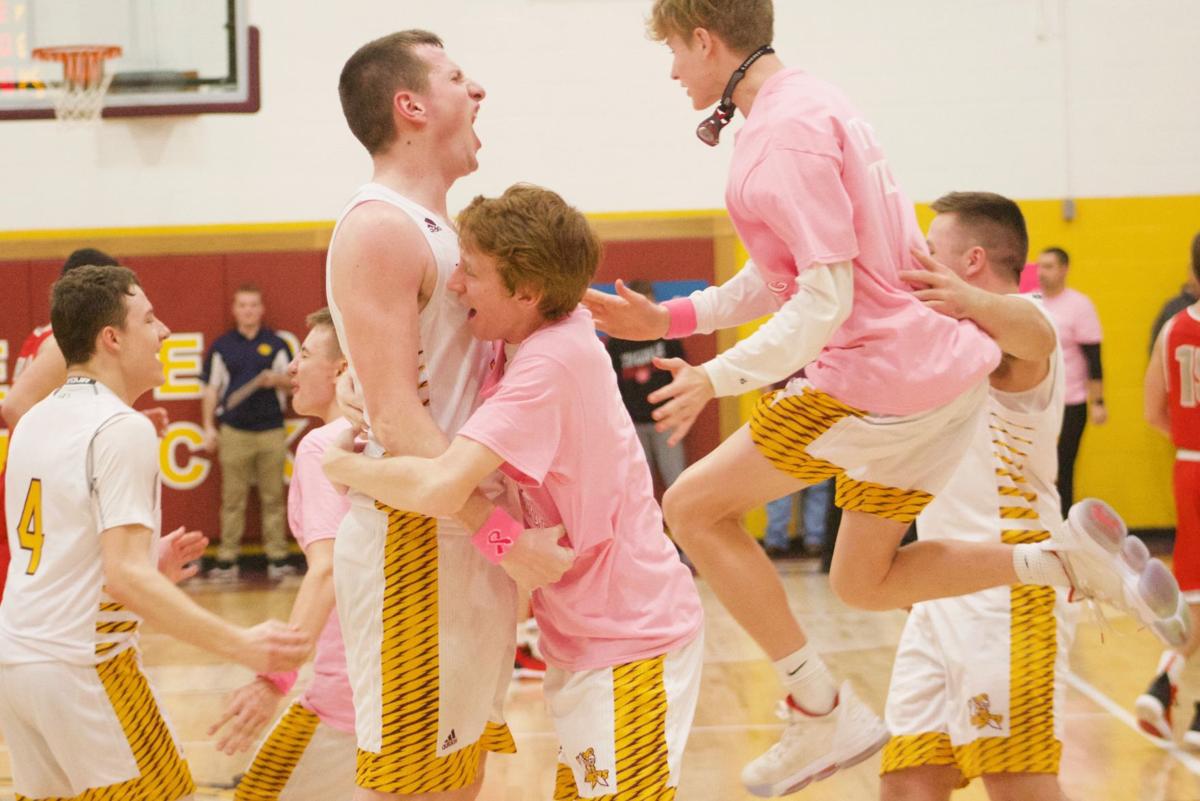 Federal Hocking’s Brad Russell lets out a yell of celebration after the Lancers defeated the Trimble Tomcats, 69-67 on Friday inside McInturf Gymnasium. 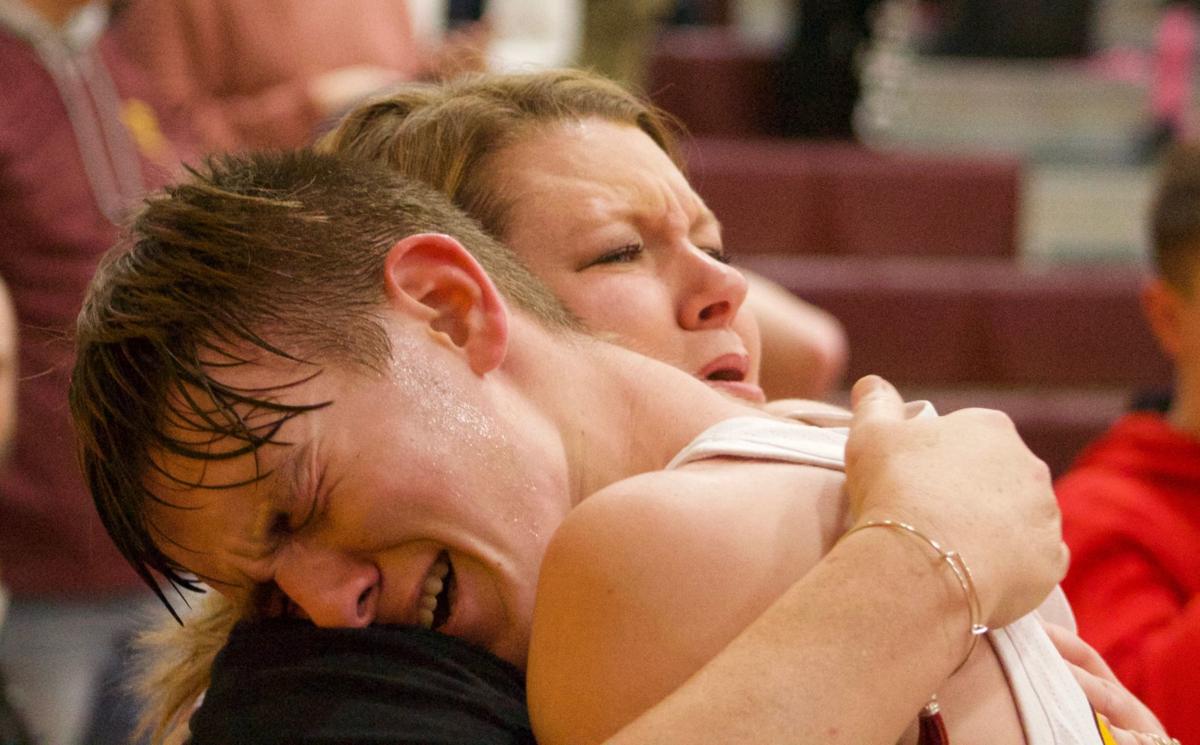 Federal Hocking’s Collin Jarvis hugs his mother, Ticia Jarvis after the Lancers were 69-67 winners over the Trimble Tomcats on Friday. 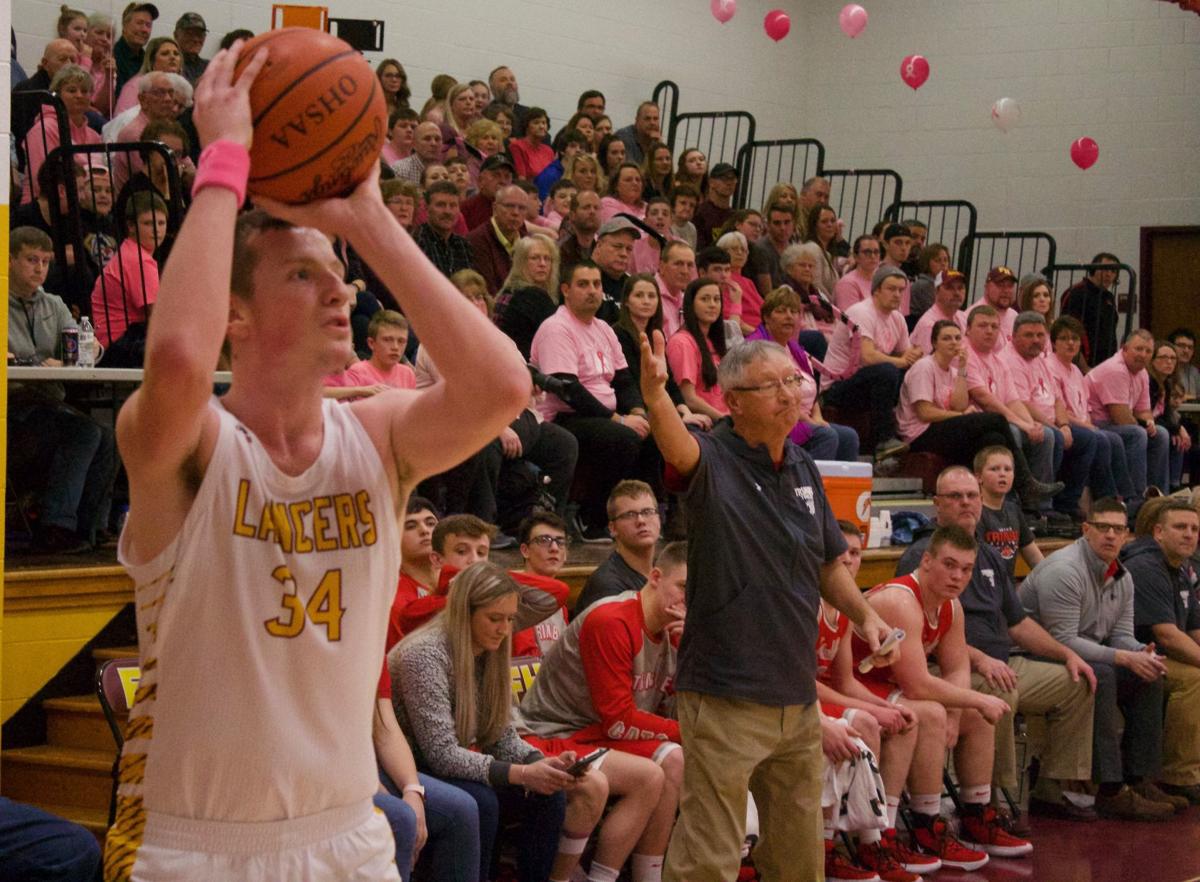 Federal Hocking’s Brad Russell lets out a yell of celebration after the Lancers defeated the Trimble Tomcats, 69-67 on Friday inside McInturf Gymnasium.

Federal Hocking’s Collin Jarvis hugs his mother, Ticia Jarvis after the Lancers were 69-67 winners over the Trimble Tomcats on Friday.

STEWART — Federal Hocking senior Brad Russell couldn’t stop smiling as he looked around McInturf Gymnasium, with Lancer fans celebrating all around him.

“I love it,” he said. “We are so happy about this. We’ve been working for this for years.”

Federal Hocking enjoyed a night that was years in the making on Friday, one that will certainly be remembered for years to come in Stewart.

The Lancers were finally able to beat their arch-nemesis from Trimble, winning a 69-67 showdown in front of a loud, and packed gymnasium.

The long-awaited rematch went the Lancers’ way, and they are in control of the Tri-Valley Conference Hocking Division for the first time in seven years.

“This is huge,” Federal Hocking coach Jonathan Thompson said. “That kind of win against a team the caliber of Trimble is awesome. I’m lost for words right at the moment, coming in and getting to play in front of a crowd like this.”

Russell was a huge reason why the Lancers came out on top, scoring a game-high 26 points on 12 of 17 shooting. He added 12 rebounds, five assists, two steals and a blocked shot.

“It’s my senior year,” Russell said. “I knew I had to step up for this big game. I was feeling really good coming into the game. I got nice and loose before the game. I felt really good tonight. I’m just happy we won. It didn’t matter how many I scored.”

Federal Hocking rode a wave of emotion and momentum to start the game. The Lancers recognized Ticia Jarvis before the game, as she is currently battling cancer. Her son, Collin, joined the rest of the Lancers as they greeted her one-by-one on the court.

The Lancers then went out and jumped on the Tomcats, going ahead 9-2 and never trailing.

“Emotions were high,” Thompson said. “Everyone in our community is just super wonderful. They step up in every occasion when people are down, pick them up. Being close to the young man’s family, it was a very emotional moment.”

Federal Hocking pushed the tempo whenever possible, eventually leading 22-6 after Wes Carpenter scored on a basket interference call against Trimble.

The Tomcats would battle back and eventually cut the deficit to two points, but they never fully overcame the first-quarter start.

The Tomcats were stymied at times by Federal Hocking’s defensive approach, as the Lancers spent most of the game face-guarding Brayden Weber and Blake Guffey in a triangle-and-two defense.

“We knew we had to limit their touches,” Thompson said. “Limit their points. Then the boys rose to the occasion and did that. In my opinion that was the difference in the ball game.”

Guffey and Weber combined for 37 points in Trimble’s 59-52 win over the Lancers on Jan. 3, but were limited to 24 points combined in the rematch. The Tomcats also were forced into more outside shots, going 8 of 29 from 3-point range.

Trimble only took seven 3-pointers in the first meeting.

“We felt if we could take them (Guffey and Weber) out of the game, that we would be able to execute and that’s exactly what happened,” Russell said.

The Lancers were also able to stare down adversity and still find a way to win.

Federal Hocking led 41-25 at halftime, but withstood and answered every Trimble run.

The Tomcats initially had the deficit down to 46-37 after Weber’s third-quarter field goal, but Russell had consecutive baskets to slow the momentum.

Quinton Basim’s 3-pointer put Federal Hocking ahead 57-43 with 6:03 remaining, but Trimble made its final push.

A 12-2 run allowed Trimble to trail just 59-55 after a Guffey 3-pointer, still with three minutes left.

Hunter Smith calmly made a jumper on the other end, followed by Russell’s put-back for a 63-57 lead.

Federal Hocking showed no fear, as Smith lined up an NBA-range 3-pointer from the right wing with just more than a minute left.

It went in as the Lancers’ crowd roared, pushing the lead to 67-60.

“It was clutch,” Thompson said. “It was one of those deals where the shot goes in the air and you say ‘No!’ Then you’re like ‘Good shot!’”

Trimble still pulled to within 67-65 when Austin Wisor swished a 3-pointer with 27.7 seconds on the clock.

The Tomcats scored 27 fourth-quarter points, nearly pulling off what would have been an incredible comeback.

“We played Trimble Basketball,” Caldwell said of the comeback. “We didn’t play Trimble Basketball the whole time. They woke up, they realized that we have nothing to lose. Lets just go out and play, and they played.”

Trimble never had the basketball with a chance to tie or take the lead. Wes Carpenter made two huge free throws with 10.8 seconds remaining for a 69-65 lead.

Wisor would score on the other end for Trimble, but only 2.5 seconds remained.

Russell would miss the front end of a one-and-one with 1.9 seconds on the clock, but Kittle’s three-quarter court heave missed at the buzzer, and the Lancers were able to celebrate.

The victory ended the Lancers’ 13-game losing streak in the series against Trimble. Federal Hocking’s last win over Trimble game on Feb. 15, 2013, when Caldwell led the Lancers to their last TVC-Hocking crown.

“Fed Hock played well,” Caldwell said. “They just beat us. That’s all I can say.”

Trimble hosts Alexander on Saturday before hosting Waterford on Tuesday.

The Tomcats have won the last two TVC-Hocking titles outright, and have also won four of the last five overall, but will have to hope for a Lancers’ loss to keep that streak going.

“It was disappointing in the fact that we just weren’t ready to play, and that’s my fault,” Caldwell said.

The Lancers’ turnaround is nearly complete. Federal Hocking was just 8-62 the previous three seasons, but now are a win away from a title.

Federal Hocking travels to Eastern on Tuesday and hosts South Gallia on Friday. A win in either game clinches at least a share of the TVC-Hocking title, while two victories will win it outright.

Russell said it’s been hard work that has led the Lancers’ turnaround.

“We’ve been working in the summer, everything,” he said. “We go 100 percent all the time. We just want to get better and better. We wanted to be at the top and right now we’re in a position to take it.”