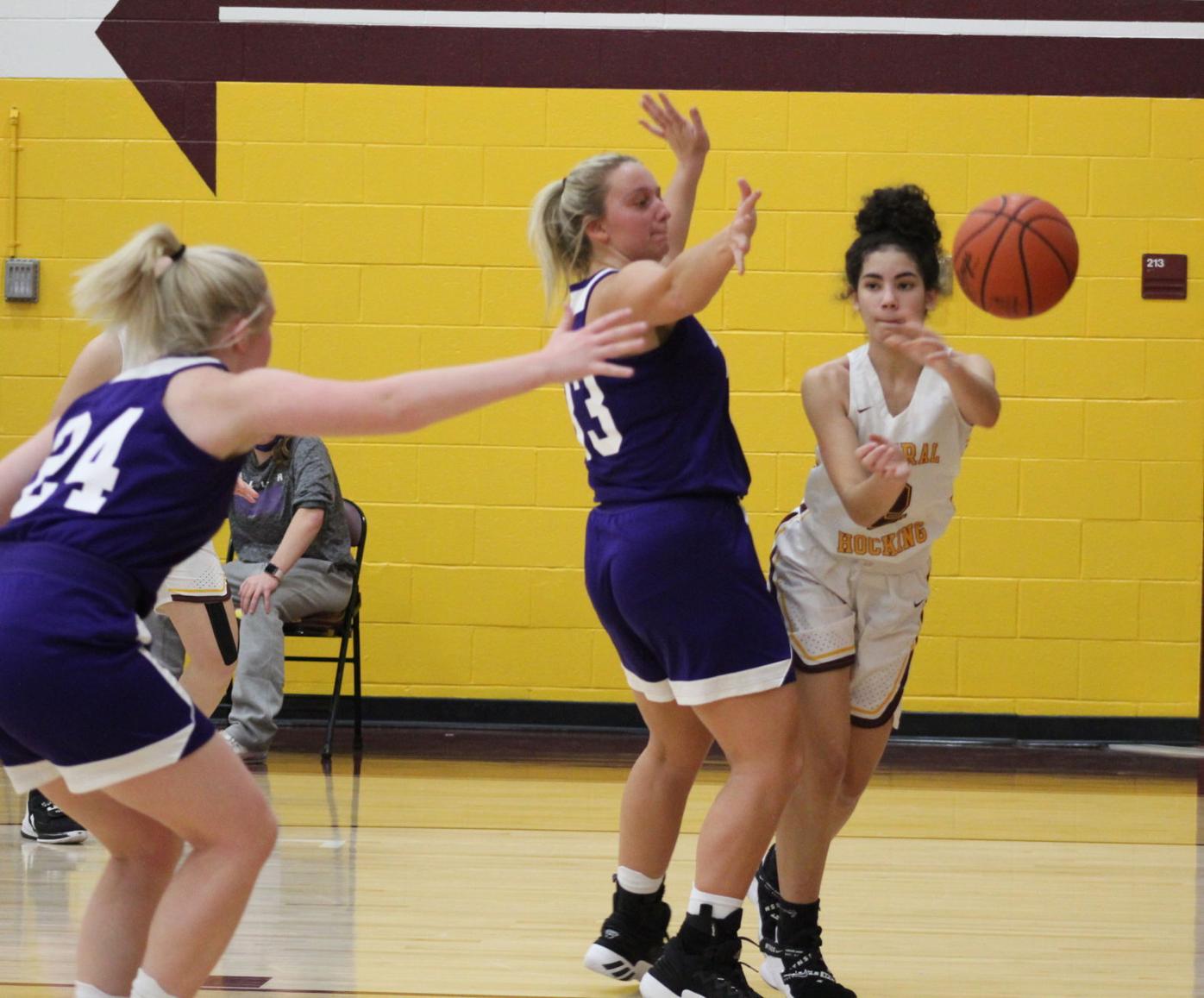 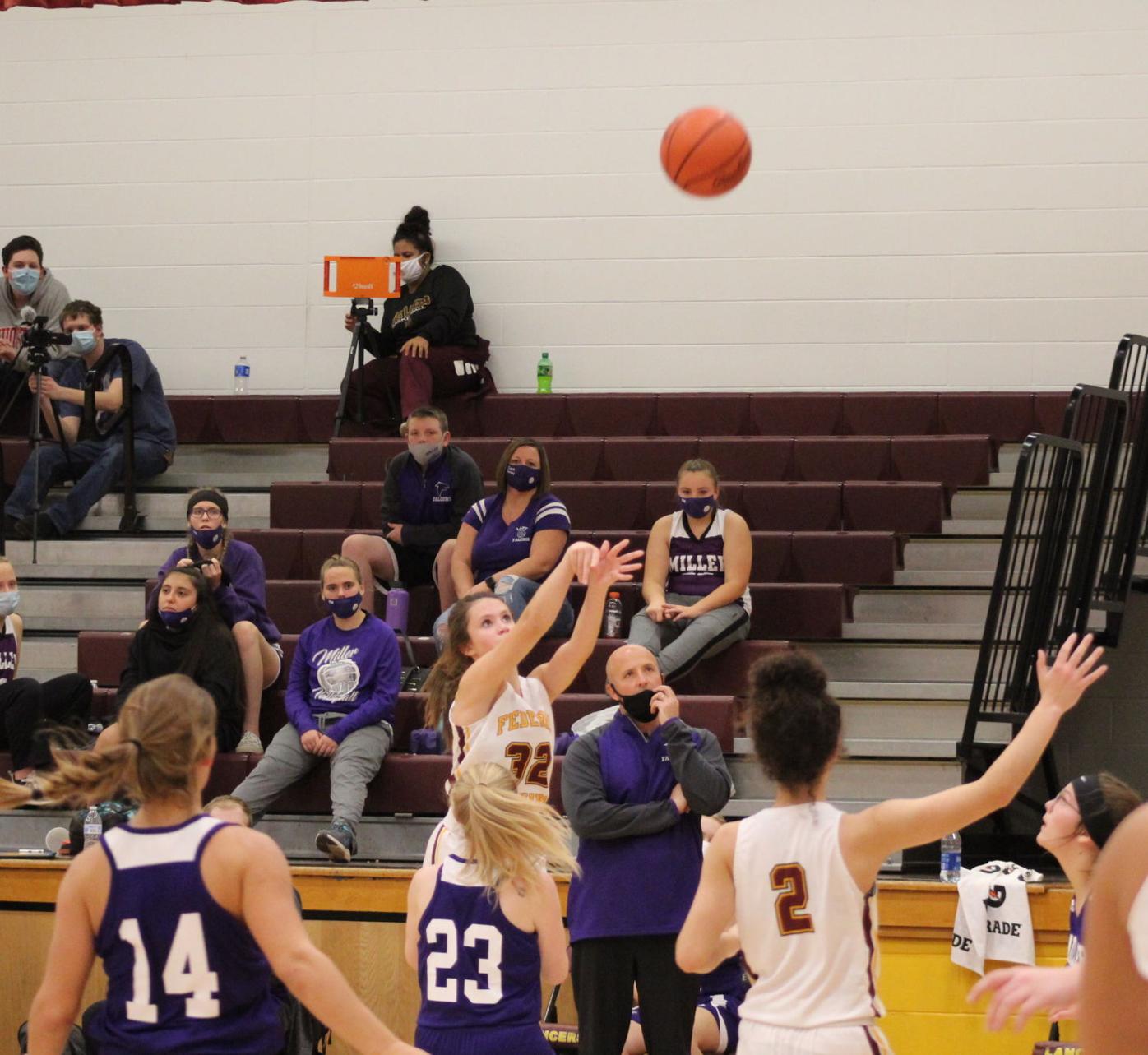 The four-year starter has led the Lancers on the court since her freshman season, and has signed to play collegiately at Glenville State College.

So you can understand why Federal Hocking head coach Jeremy Tolson was a little concerned when his daughter got in foul trouble in the second half of Friday’s season opener against the Miller Falcons.

“It definitely hurts when she’s sitting,” Jeremy Tolson said. “It makes you worried a little bit. We were fortunate enough to have a comfortable lead coming into halftime. I was worried about a little run they (Miller) were going to make.”

The Falcons weren’t able to make that run however, thanks to the Lancers’ supporting cast.

Federal Hocking had contributions up and down the lineup in a season-opening 62-41 win over Miller inside a socially-distanced McInturf Gymnasium.

All of her points came in the first half, as her minutes were limited after picking up a fourth foul in the third quarter.

Tolson’s teammates picked up the slack, combining to outscore the Falcons 29-21 in the second half.

Jeremy Tolson said the scenario that played out on Friday is something he’s harped on in practice, how will the Lancers respond if Paige Tolson isn’t on the court to direct the offense and defense?

“They did step up and I see some of the focus we have here is for the future,” Jeremy Tolson said. “You lose your heart and soul, your point guard. They’re very dependent on it. I’ve kind of been pushing them in practice in case, what happens if she gets into foul trouble? What happens next year when you don’t have that. I’ve been putting some kids out of their comfort zone.”

They helped squash Miller’s comeback hopes in the third quarter. Federal Hocking led 33-20 at halftime, but the lead quickly went to 39-21 after Smith made a pair of 3s in the first minute of the second half.

When Tabler nailed a 3-pointer, on an assist from Reagan Jeffers, the Lancers were comfortably ahead 42-21 with 6:16 left in the third quarter.

“That was right where I wanted them to be that first three or four minutes of the second half,” Jeremy Tolson said. “They did their job.”

“We knew coming in, we’re short handed,” Miller coach Bryan Dorsey said. “We’re playing zone, we’re sitting in our zone. If they get hot from 3, it’s going to be a long night.

“Tolson, she’s tough,” he added. “She’s a really tough player. (Smith) got hot. We tried to hang in there. I thought our girls played really tough.”

The Falcons only had six players available, and settled into a 2-3 zone most of the night. Senior post Josie Crabtree (24 points on 7 of 12 shooting, seven rebounds, seven steals) did everything she could to keep Miller in the game.

“She did a great job for us tonight and she played every minute” Dorsey said. “She’s out there, no subs or anything. She’s an absolute warrior for me. She’s been a warrior for four years. She’s great.”

Dorsey said the Falcons hope to get a player back from a meniscus injury in a couple weeks, but until then they’ll have to rely on the six players they have.

“You want to try and save your timeouts to give your players a rest,” Dorsey said. “And we’re going to be zoning a lot. Just trying to keep us out of foul trouble and get a rest on the defensive end.”

The Lancers had the luxury of being the deeper team on Friday, as all 12 players on the roster got into the game. Jeffers had five points, seven rebounds, four steals and two blocks, while Tiffany Allen had five points and five rebounds while spending most of the game dealing with Crabtree in the post.

“Considering they ran a 2-3 zone pretty much that whole game, and trying to slow us down, and having Paige and Alexis sit a good portion of this game, to score 62, game one, I can live with that,” Jeremy Tolson said.

Federal Hocking honored Tolson and Tabler — its only two seniors — before the game. The two have played together on varsity since their freshman year.

The Lancers then went out and never trailed against the Falcons, leading 9-2 after Tabler’s steal and assist led to a Tolson layup on a fast break.

It was one area Jeremy Tolson hoped to see improvement, as the Lancers were whistled for 23 fouls.

“We’ve got to fix our fouling,” he said. “They shot a lot of free throws.”

The Lancers also shot a lot of 3-pointers against Miller’s zone, making 9 of 40 long range attempt.

Jeremy Tolson said that might have been a touch too many 3-point attempts, but long distance shots are certainly going to be a big part of their offense.

“We do have some shooters. I guess we’re going to live and die by it,” he said. “I’m OK with that. They hit them when they needed to.”

Friday’s meeting is the only one between the two former league rivals, as Miller is in its first season competing in the Mid-State League Cardinal Division. The Falcons are scheduled to host Millersport on Nov. 28.

The Lancers will host Crooksville on Monday in a 6 p.m. start. as they look for another win to start the season.

Federal Hocking showed a lot of tenacity against Miller, and Jeremy Tolson said that will be a trait his team will display during the season.

“You got a good effort with these kids,” he said. “We lost a lot. The kids haven’t wavered at all. It hasn’t stopped them. I’m very pleased with what I saw tonight. I think we can compete.”