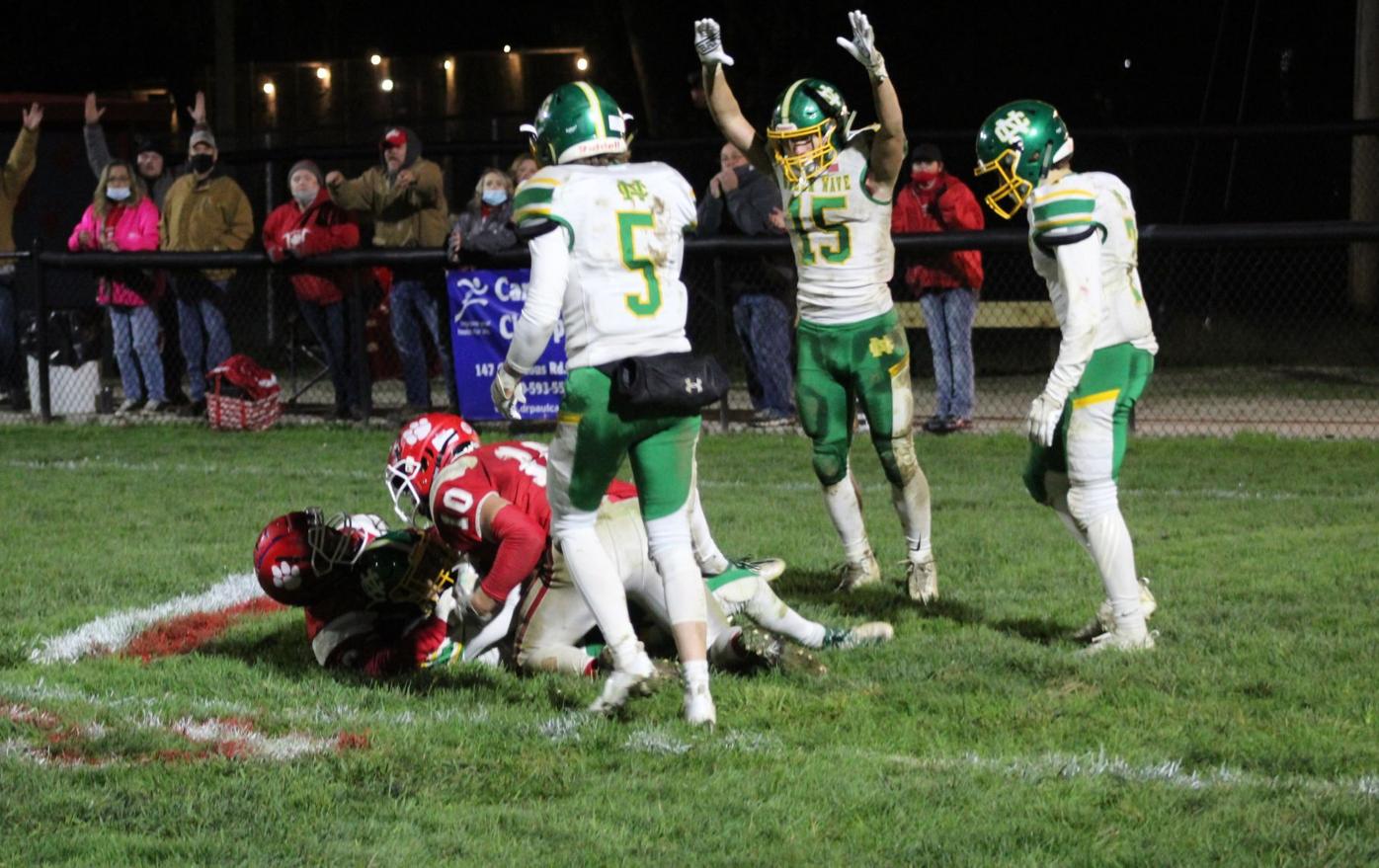 Trimble’s Blake Guffey (10) and Austin Wisor battle for a ball in the end zone, as Newark Catholic’s Matt Kirk (5), Kyle Langenbrunner (15) and Tanner Elwell (right) look on. Newark Catholic’s Tyson Mummey would emerge from the pile with an interception. 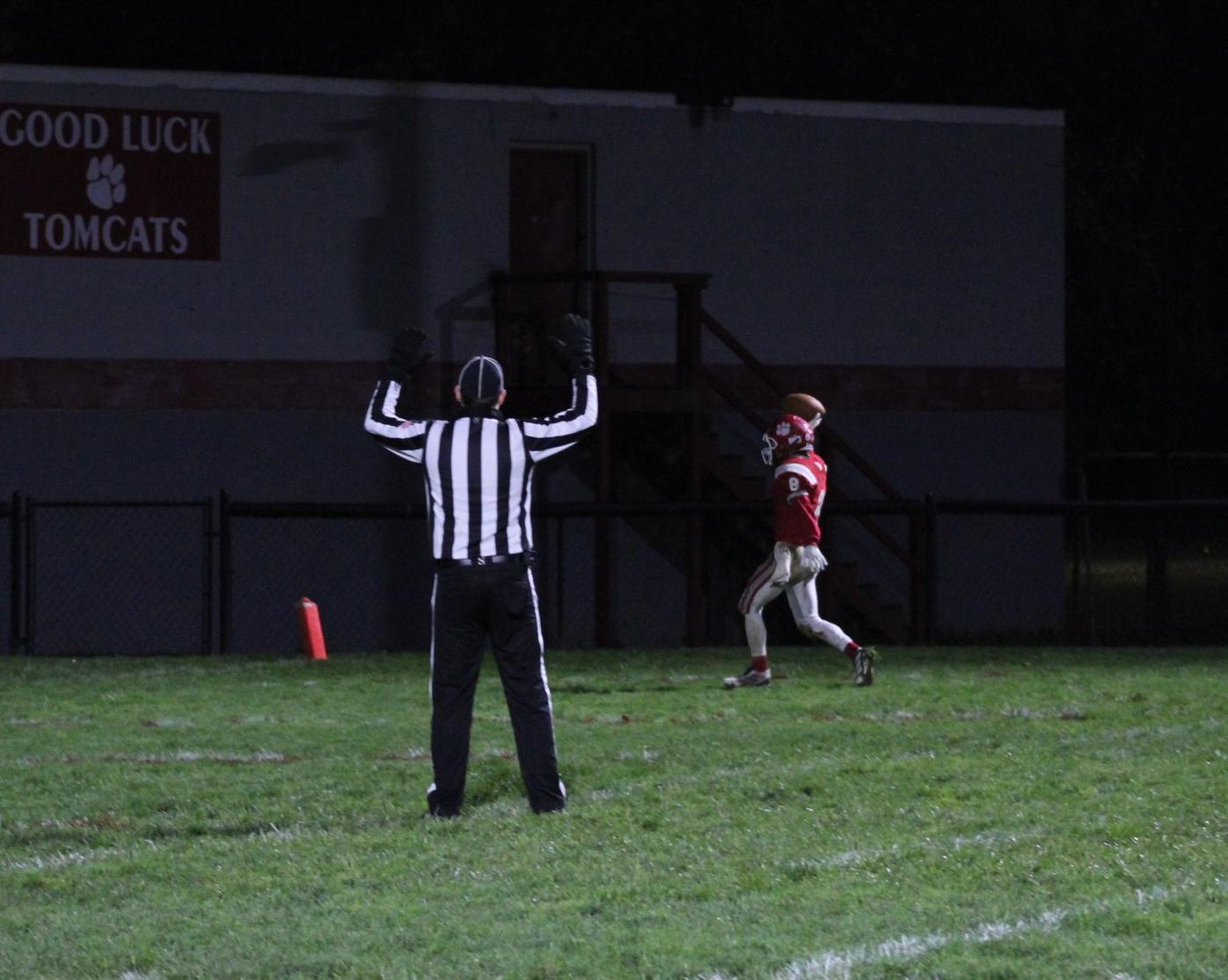 Trimble’s Blake Guffey (10) and Austin Wisor battle for a ball in the end zone, as Newark Catholic’s Matt Kirk (5), Kyle Langenbrunner (15) and Tanner Elwell (right) look on. Newark Catholic’s Tyson Mummey would emerge from the pile with an interception.

GLOUSTER — Members of the Trimble Tomcats’ football team walked out of their locker room on Friday, heads held high but still showing the emotion that comes from a season-ending loss.

The Tomcats had their postseason run come to an end on Friday, losing to No. 5 Newark Catholic 35-19 in a Division VII, Region 27 semifinal inside Glouster Memorial Stadium.

The No. 1 seeded Tomcats outgained the Green Wave, 351 yards to 216, but were done in by five turnovers.

“You say that every year, you could get away with those against some teams we play, but against a good team, they’re going to make you pay,” Trimble coach Phil Faires said. “They did.”

While the Tomcats came up a game short of reaching the regional championship game, it was still a remarkable year for Faires and his Tomcats.

With 15 new starters stepping into the fold, and COVID-19 wrecking the offseason, it would have been understandable if the Tomcats took a step back in 2020.

That didn’t happen, as Friday’s playoff loss is Trimble’s only one of the season. The Tomcats went 8-1, beating arch-rival Nelsonville-York, winning an outright league title then adding two more playoff victories to their growing total.

The Tomcats did it with only two seniors seeing significant playing time in lineman Ian Spencer and linebacker Todd Fouts.

Fouts was a three-year starter at linebacker, one of the last holdovers from the 2018 run to the Division VII state championship game. He recorded a key interception against Newark Catholic.

“He was Mr. Everything,” Faires said. “We needed someone to play a position, he went to it. With his weight (160 pounds) he’s out of position a lot of times. Just doesn’t have the mass to push them I guess, but he gave everything he had.”

The Tomcats will look back on their mistakes as the deciding factor against Newark Catholic (6-3).

The Green Wave intercepted four passes, one coming in the end zone and another turning into an 85-yard return for a score. Trimble also fumbled four times, losing one of them.

Another one of Newark Catholic’s scores came on a short field, after a snap sailed high over punter Blake Guffey’s head in the first quarter.

“You take away five turnovers, we would win that game, but they caused some of those turnovers too,” Faires said. “That’s what happens. They’re a storied program and they’re expecting to win these games, just like we are now. They came out the better of it this time.”

Despite the turnovers, Trimble only trailed 21-19 going to the fourth quarter.

The Tomcats found the end zone twice in the third quarter to close the gap.

The first third-quarter touchdown was set up by Fouts’ interception. Trimble drove 32 yards in 11 plays, with Tabor Lackey scoring from a yard out.

Trimble got the ball back though, and hit a home run on its next drive.

Lackey threw backwards to Guffey, who then looked deep to Austin Wisor.

The Green Wave were fooled by the double pass, as Wisor was open by a mile. He hauled in the catch for 37 yards, and the Tomcats had all the momentum with 1:39 left in the third quarter.

“We hadn’t run it all year,” Faires said. “Guffey has the arm that can do it. He’s just an athlete. It was wide open.

“That’s a big play. If we win that game, we’re talking about that play a lot more.”

Newark Catholic answered with perhaps its most important drive of the game. It went 56 yards in seven plays, with Tristan Gorius scoring from a yard out for a 28-19 lead early in the fourth quarter.

Gorius broke off a 33-yard run down to Trimble’s four-yard line to set up the score.

“That was big,” Faires said. “They kept it at two scores.”

The final two turnovers were the backbreakers for Trimble.

The Tomcats were knocking at the door of a score, facing second-and-10 from the Green Wave 31.

Faires dug back into his bag of tricks, this time having tailback Bryce Downs try a pass to Wisor.

Wisor and Newark Catholic’s Tyson Mummey both went up for the ball in the end zone, and both initially appeared to come down with it.

The two wrestled for the ball while on the ground, Mummey eventually coming up with it. He was awarded an interception and Newark Catholic took over with just 6:53 remaining.

“I think if they had both held onto it they would have given him the touchdown,” Faires said. “Where he was just out of position a little bit, the guy took it away from him and came up with it. They said it wasn’t duel possession, I guess.”

The Tomcats quickly got a defensive stop, and moved the ball to the Green Wave 21-yard line.

Lackey tried to get a pass to a receiver along the sidelines, but Newark Catholic’s Ryan Poly was able to step in front of the delivery.

He took the interception up the sideline for an 85-yard score, giving the Green Wave the 35-19 cushion with only 3:32 remaining.

The Tomcats struck first, taking the opening drive to the end zone when Wisor came down with a jump ball from Lackey for a 27-yard touchdown.

However, the PAT was missed, and Trimble only led 6-0.

Newark Catholic would lead 14-6 after Cole Canter’s eight-yard run, and 21-6 after a one-yard run by Gorius.

Canter completed 7 of 11 passes for 109 yards, while Gorius rushed for 47 yards and two scores on 10 carries.

Newark Catholic will host No. 7 Shadyside in the Region 27 final, as the Tigers were 42-9 winners over River.

Lackey finished with 158 yards rushing on 23 carries for Trimble, also completing 9 of 21 passes for 99 yards and another score. Downs had 53 yards on 14 carries. Wisor caught six passes for 98 yards with two touchdowns.

Lackey, Downs, Guffey and Wisor will be among the key pieces for next season. Trimble will have the opportunity to return nearly every starter, and Faires said the group can build off of 2020’s successes.

“We put a lot in this year, with new people in all positions,” he said. “Next year’s going to be just the opposite. We’ll keep running this same offense. We’ve got everything in we need. We’ll just fine tune it a little bit.

“Hopefully we’re going through some teams next year and be back in this spot and hopefully play this same team (Newark Catholic) again, because they’re young too.”