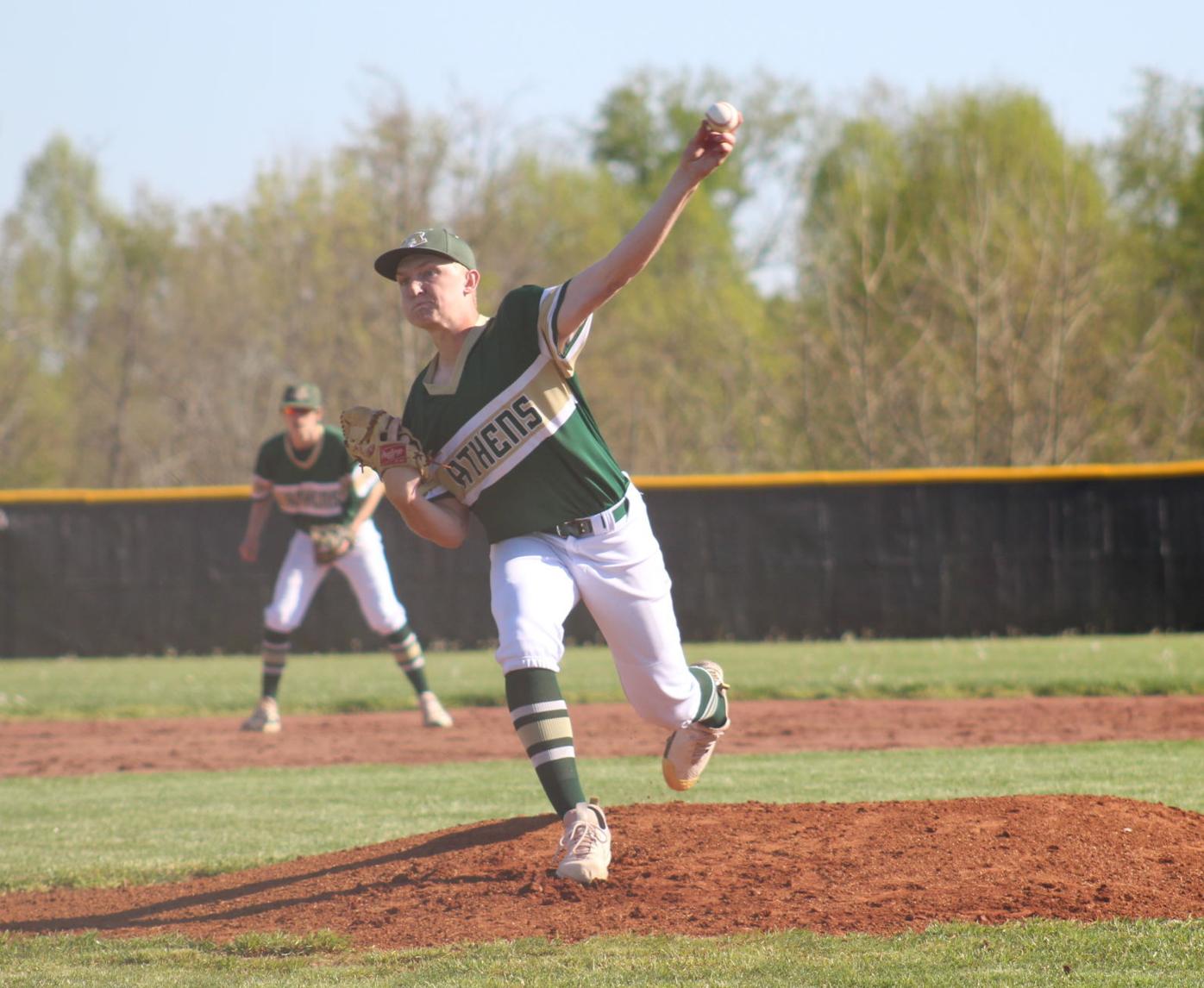 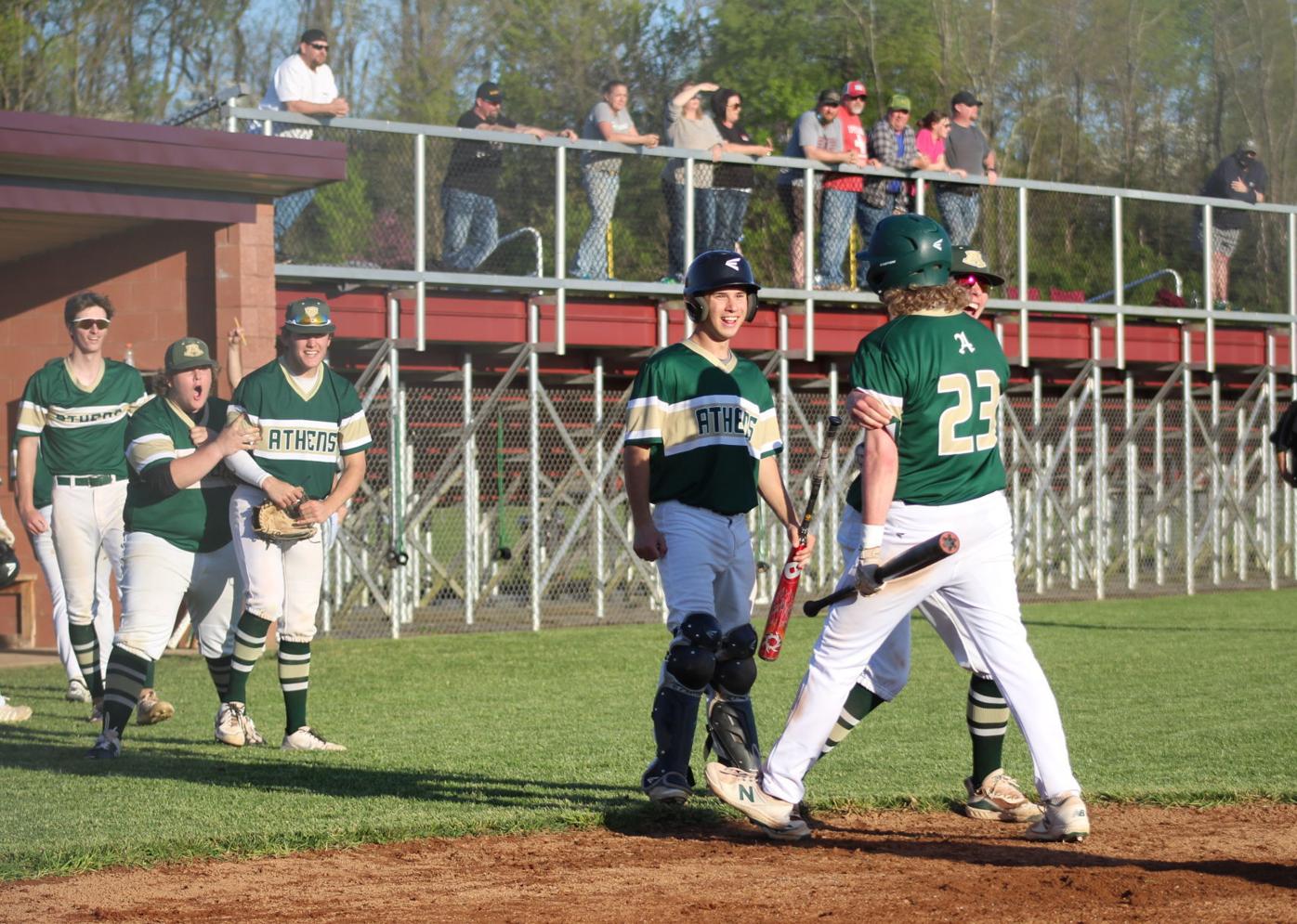 Athens’ Will Ginder (23) scores the go-ahead run in the eighth inning at Meigs, and is greeted by Will Matters and Charlie Strohm on Monday. The Bulldogs won, 1-0, in eight innings.

Athens’ Will Ginder (23) scores the go-ahead run in the eighth inning at Meigs, and is greeted by Will Matters and Charlie Strohm on Monday. The Bulldogs won, 1-0, in eight innings.

ROCKSPRINGS — Athens senior Cameron Niese leaned against assistant coach Matt Trainer as he made his way back to the dugout, exhaustion kicking in after throwing 126 pitches.

Facing one of the best young pitchers the Tri-Valley Conference has seen in some time, the Bulldogs needed Niese to be nearly perfect on Monday.

Niese responded by winning a pitching duel for the ages, throwing an eight-inning no-hitter in Athens’ 1-0 win at Meigs High School.

Tanner McCune’s RBI single in the top of the eighth allowed the Bulldogs to pin a loss against Meigs’ outstanding sophomore ace, Ethan Stewart, and pull even in the TVC-Ohio race.

“It was a duel for sure,” Niese said. “One run in eight innings? That’s unreal for high school baseball. You don’t get that matchup very much, ever.”

Stewart threw his own no-hitter in the team’s first meeting, a 3-0 Meigs win on April 9th. Stewart had 17 strikeouts and was only a walk away from perfection.

Remarkably, Niese returned the favor in the rematch

“Just the fastball,” Niese said, when asked what was working for him. “Throwing it by them. Getting it in the zone. Didn’t have too many placement issues today.”

Niese didn’t pitch in the earlier loss to the Marauders (8-6, 7-1 TVC-Ohio). Athens coach Todd Nuzum went to his lefty in the rematch, as Niese had seven strikeouts, four walks and one hit batter.

“When he’s throwing strikes, he can be really, really good,” Nuzum said. “He’s getting ahead of hitters. There at one point, I think maybe the third inning, he was getting behind in the count. Then it just seemed like he got in the groove. Was getting ahead of the hitters. When he gets ahead, his ball sinks for him.”

The Bulldogs (11-5, 8-1 TVC-Ohio) needed every zero Niese put up on the scoreboard against Stewart.

The flame-throwing sophomore, who also has a strong curveball to keep hitters off-balanced, certainly has the respect of everyone in Athens’ dugout.

Stewart struck out 12 and walked two batters on 118 pitches in eight complete innings.

“His curveball is something else, and only a sophomore,” Niese said. “He’s going to be something special for sure.”

The Bulldogs had a more successful approach at the plate than in Stewart’s no-hitter, getting nine hits on Monday.

Nuzum said they cranked up the pitching machine to 90 miles an hour in order to prepare for Stewart’s heater.

“We’re instilling in them that we need to have a two-strike approach,” Nuzum said. “Just put the ball into play as much as we can. Let’s make them field it and they did a heck of a job fielding the ball. But with his velocity, if we’re making contact, the ball’s going to go somewhere.”

Meigs played error-free baseball in the field, but Athens had at least one base hit in seven of the eight innings against Stewart, finally cashing in in the top of the eighth inning.

With one out, Will Ginder hit a single back up the middle to center field. Niese followed with a single into right field.

Niese, on top of his shutout on the mound, went 3 for 4 at the plate. He had the Bulldogs’ only extra-base hit, a sixth-inning double.

“We were just putting it in play,” Niese said. “The only hit that we had that was any more than a little blooper in the outfield was mine. That was the only one. All of them were little grounders that found holes.”

The Bulldogs tried to get a bunt down with Shane McDade, but his foul pop was caught by first baseman Andrew Dodson for the second out.

That brought McCune up to the plate. He lofted a single to left field, allowing Ginder to race home from second base.

After 15 innings in two games, the Bulldogs finally clawed out a run against Stewart. The players poured out of the dugout to greet Ginder, Athens leading 1-0.

McCune had two hits in the game, also hitting a single to left field to lead off the seventh inning.

“They were going to have to make a throw there,” Nuzum said of Meigs’ defense. “I was not stopping (Ginder) there (at third base). Tanner had a great game today. He’s squaring up some balls. Big hit.”

All that was left was for Niese to complete the victory, and without going over the 125-pitch limit. When he struck out Tyler Tillis looking for the finale out, Athens was able to celebrate the huge road win, and Niese’s no-no.

Will Matters also had a two-hit game for Athens from the lead-off position, with Derrick Welsh gaining a first-inning single.

There were plenty of battles back and forth, perhaps none bigger than when Meigs senior Wyatt Hoover stepped to the plate with two on and two out in the bottom of the sixth.

Hoover worked a full count before Niese finally a ground ball to Ginder at third base to get out of the jam, and keep the game scoreless.

“I don’t know if I’m more happy that I got that guy out or won the game,” Niese said. “That was a battle. No margin for error.”

Meigs got a lead-off runner in the bottom of the seventh when Caleb Burnem drew a walk, but Athens’ tandem of McDade and Matters turned a 4-6-3 double play, and the Marauders never had another baserunner against Niese.

The Marauders and Bulldogs control their own destinies to potentially share a TVC-Ohio crown. Meigs still has two league games left against River Valley, as well as games against Nelsonville-York and Wellston.

Athens will see River Valley, Alexander and Vinton County in its quest for a fourth straight title.

If the Bulldogs are ultimately able to win another TVC-Ohio crown, they’ll remember Niese’s heroic no-hitter as the main reason why it was possible.

“We wanted it real bad,” Nuzum said. “I could tell on the bus ride down, we were focused and mentally ready to go and it seemed like the bench was into the game the whole game. Everyone, all 17 players, were into the ball game.”