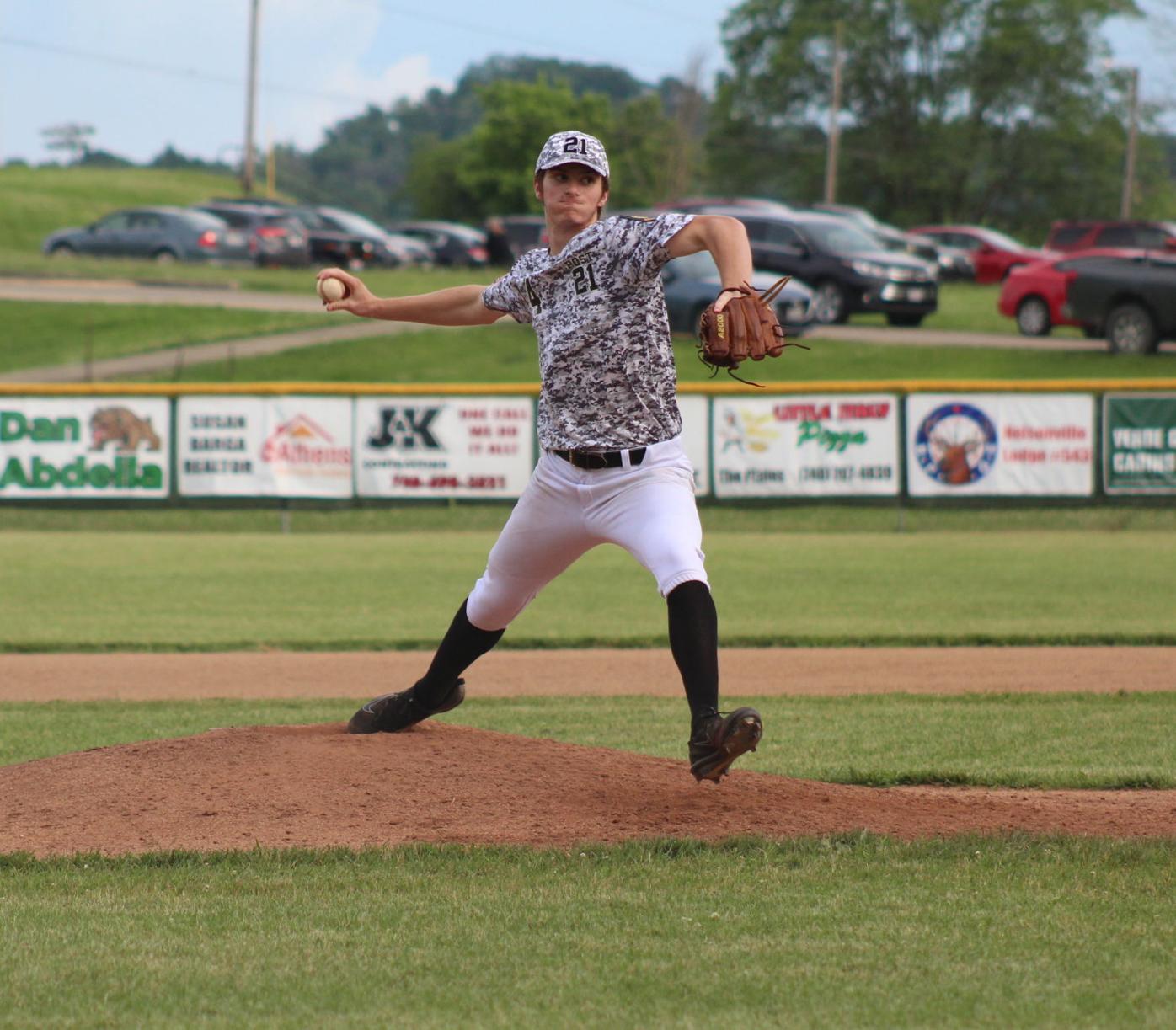 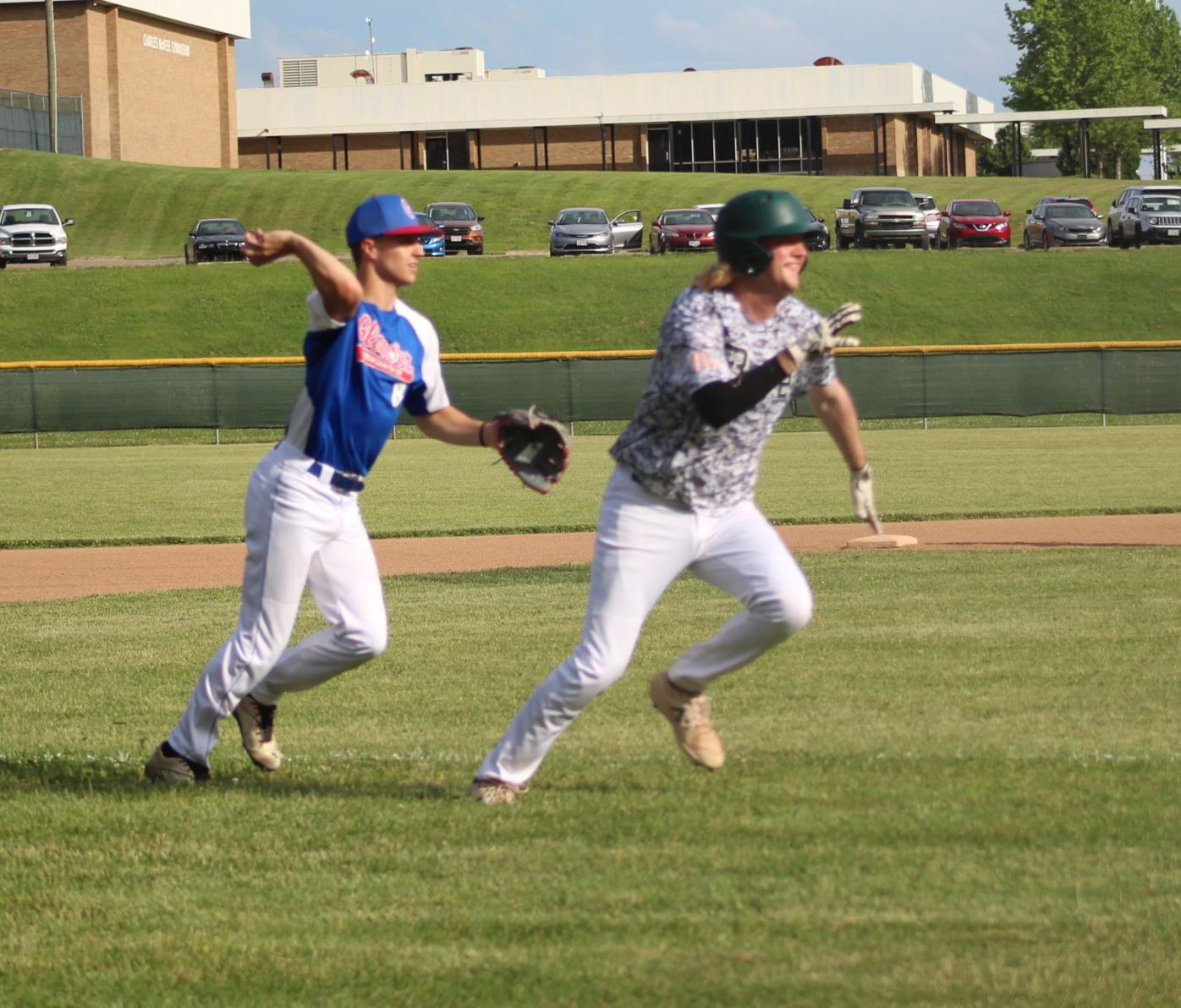 Glouster’s Austin Wisor (left) goes after Athens’ Will Ginder (right) during a rundown in the first inning.

Glouster’s Austin Wisor (left) goes after Athens’ Will Ginder (right) during a rundown in the first inning.

Jerry Lackey said that the idea for legion baseball returning to Glouster started with Marv Shamhart.

“Marv called me about three weeks before the season and said, ‘can you raise $5,000 and round up a group of kids?’ And we did,” Lackey said.

The idea has become a reality, as American Legion Baseball is back in Glouster for the first time in 17 years.

Glouster Post 414 played its second game of the summer, losing to Athens Post 21 in a wild 11-10 game on Monday at Rannow Field.

Lackey is coaching Glouster, with Shamhart serving as the team manager.

Glouster Post 414 has a mixture of players from different communities. Most of the players are from Trimble High School, but athletes from Federal Hocking, Miller, Alexander and Nelsonville-York are on the team as well.

“It’s a credit to these kids,” Lackey said. “They wanted to come out and play, get better because of COVID last year. It’s a credit to our community, surrounding communities, to come together and give us the money to get through this season.”

While Post 414 is back on the scene with faces from different schools, Post 21 returns after last year’s American Legion season was canceled due to COVID.

Kyle Lonas leads a group of Athens High School players. He has some ‘old’ guys like Andrew Stephens, a 2020 Athens graduate who was the starting second baseman on the Bulldogs’ 2019 district championship squad.

Will Ginder and Cam Niese, players who just completed their senior seasons, are also in the mix.

Lonas also said he has four players who just completed their freshmen year of high school, and will have the chance to learn under the veterans.

“It’s a great opportunity for them to be around these older guys and get a chance for them to learn and build themselves as high school players,” Lonas said. “And for these old guys, to contribute and kind of take that role of mentoring a little bit and showing the way to do things and communicate.”

Post 21 ultimately won the season opener thanks to a big early lead, then heads up defense down the stretch.

Glouster was dealt a tough blow at the start, when regularly scheduled starting pitcher Blayton Cox was unable to go.

That moved Wes Carpenter to the mound, and Athens was able to take advantage of the quick pitching change.

The first seven Post 21 batters reached. Stephens was on base twice in the inning, his two-run double to left-center giving Athens a 6-1 lead.

“It’s great to have Andrew back on the field,” Lonas said. “Just his baseball awareness and giving those other guys a chance to experience some of what we missed out on last year.”

Athens went ahead 7-1 after Derrick Welsh’s RBI single past shortstop.

Post 21 would get eight runs on six hits and an error in the frame to lead 8-1.

“They were finding holes,” Lonas said. “The baseball found its way into the green spots. Nothing fancy. They were up in the infield at one point and we got some dink hits into right field, finding ways to produce runs.”

Athens would plate 10 runs by the end of the second inning, starting the season with a bang offensively. Jacob Bulger’s RBI single scored a ninth run in the second.

“It was good to be out here and scoring runs,” Lonas said. “It was about the fifth inning, we kind of hit that heat wall where it got hot and got a little bit tired.”

Carpenter certainly recovered for Post 414. He settled down to pitch five innings, retiring the final seven hitters he faced and nine of the final 10 overall.

“I was proud of Wes, the way he stepped up and battled all night long,” Lackey said. “Threw 100 pitches and about every other inning I tried to take him out and he just wanted to stay out there for his team. Anytime you’ve got a kid like that, you have to love it.”

Glouster was behind and had to juggle its lineup after Cox left the game, but it battled back.

It started with a five-run second inning. Brandon Burdette hit a two-run single in the frame, with Tabor Lackey and Drew Harris also collecting RBIs to get to within 8-6.

Glouster was within 10-7 after the fourth when Maleek Williams hit a double, then scored on Collin Jarvis’ RBI ground out.

Post 414 cut the deficit to 11-8 after Jarvis’ RBI infield single to short in the fifth. Glouster was down 11-9 after Harris laced a run-scoring single to left in the sixth.

Post 21 was able to make defensive plays to help save the game. Glouster’s Bryce Downs stole second and third base to get to 90 feet from the plate.

After stealing third, Post 21 third baseman Brayden Kish threw the ball back to Welsh on the mound.

The baseball bounced by Welsh, and Downs broke for home, seeing an opening to score.

First baseman Cam Niese was alert, getting to the baseball and firing to catcher Marcus Stevers.

Stevers applied a tag to Downs as he slid home for the third out of the sixth inning, allowing Athens to preserve the two-run lead.

Post 21 made another defensive play to save the game in the seventh.

With Niese on the mound, Post 414 kept the game alive when Jarvis drew a two-out walk, then stole second.

Kylan McClain came up with a clutch base hit to center, scoring Jarvis to get Glouster to within 11-10. McClain took second on the throw, and Post 414 had the tying run in scoring position with lead-off hitter Austin Wisor stepping to the plate.

Before Wisor could get settled in, Niese spun around and threw a strike to Stephens at shortstop, picking McClain off to end the game.

“Both times the ball bounced in our favor,” Lonas said. “We were in the right spot at the right time and made the heads up play.”

Ginder, Welsh and Niese all pitched for Athens. Ginder started and pitched two innings, with Welsh getting the win after working four innings of relief. Welsh struck out four without walking a batter, with Niese getting the save.

Post 21 will continue the start to the new season on Thursday when they host Lancaster.

“I’m glad that we have this many guys out,” Lonas said. “We were worried about the numbers. We have 14 on the roster, coming and going, people working, juggling all that stuff. That’s what people do in the summer, right?”

Glouster was scheduled to continue the season on Tuesday at home against Jackson before traveling to Meigs for a Sunday doubleheader. Post 414 didn’t complete the comeback on Monday, but Lackey was still excited about the group’s potential.

“They’re great kids,” he said. “That’s the fun part about legion. You get a group of kids you get to put together and see what they can do together. Once we gel, we’re going to make some noise at the end of the season.”