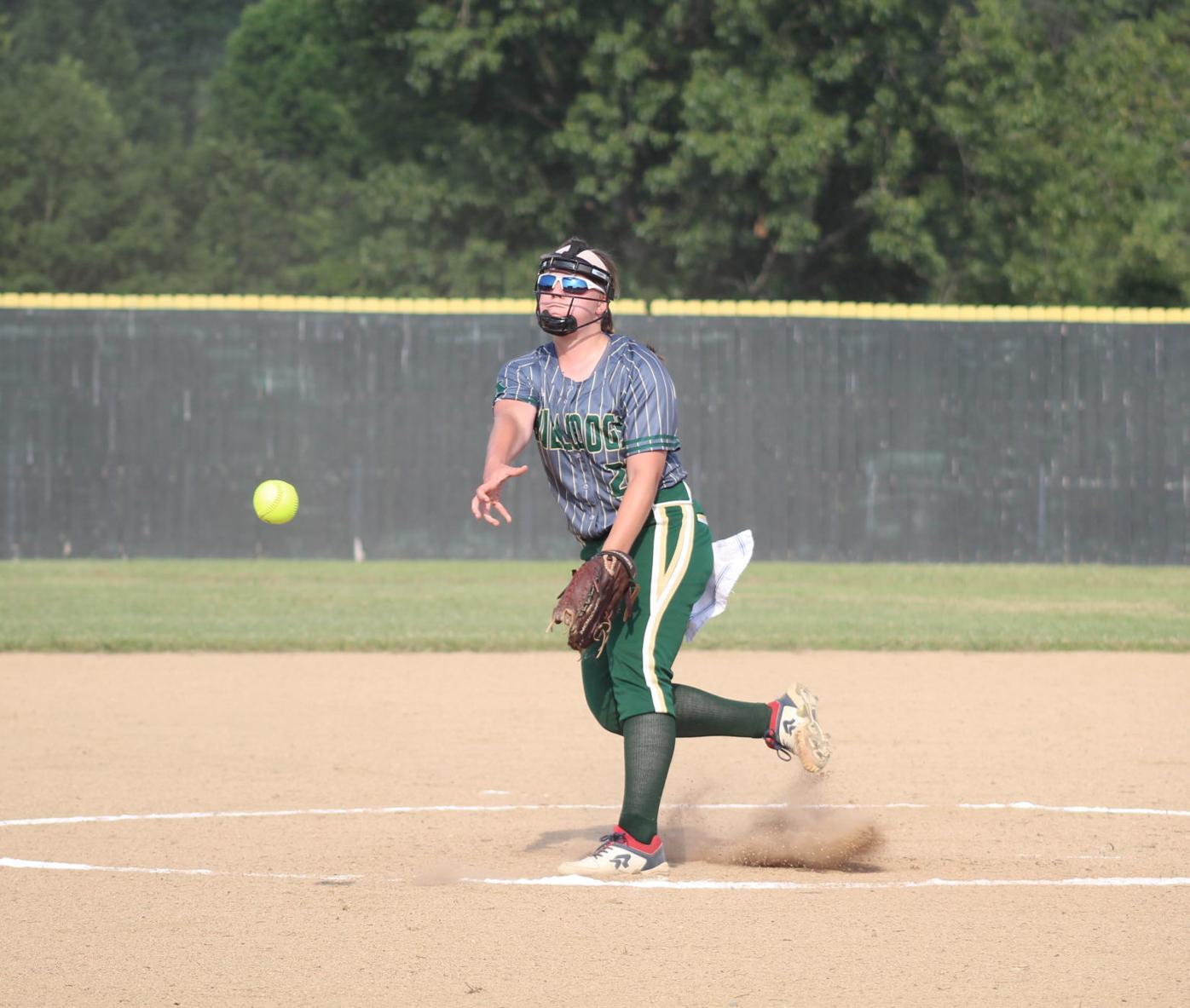 Athens’ Ashleigh James delivers a pitch during a game against Federal Hocking on Monday. James, who will be a sophomore in the fall, threw a five-inning no-hitter. 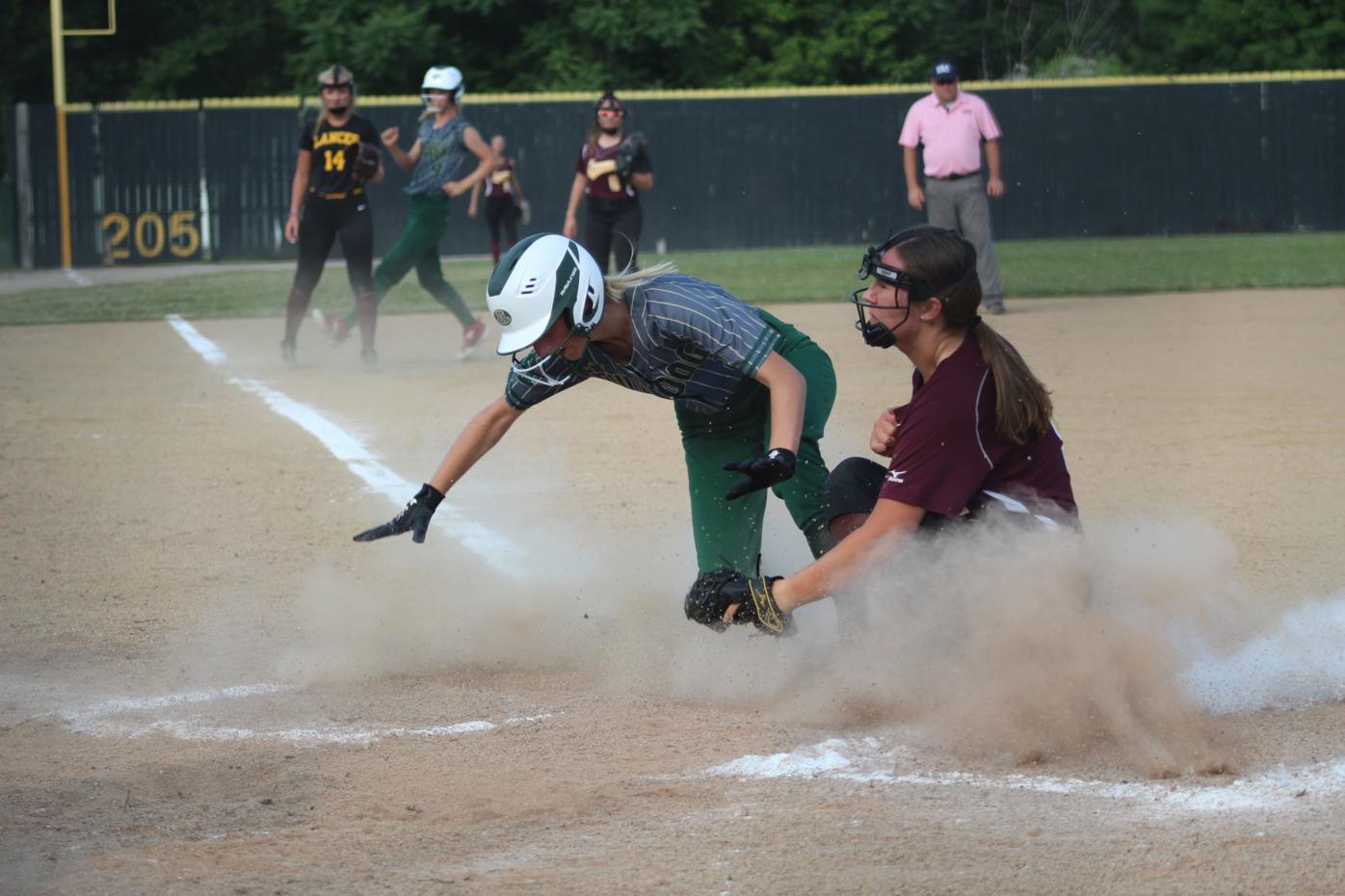 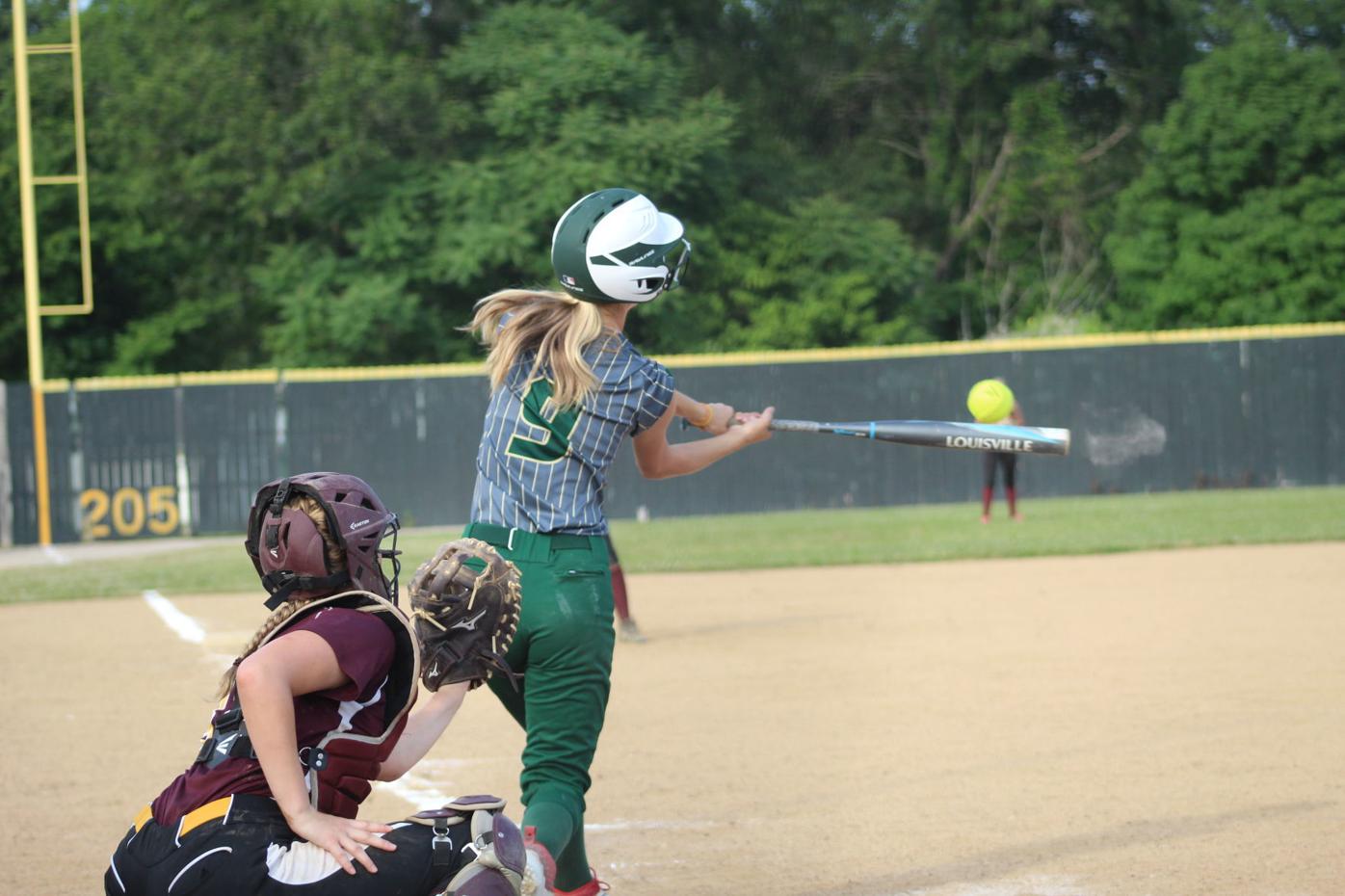 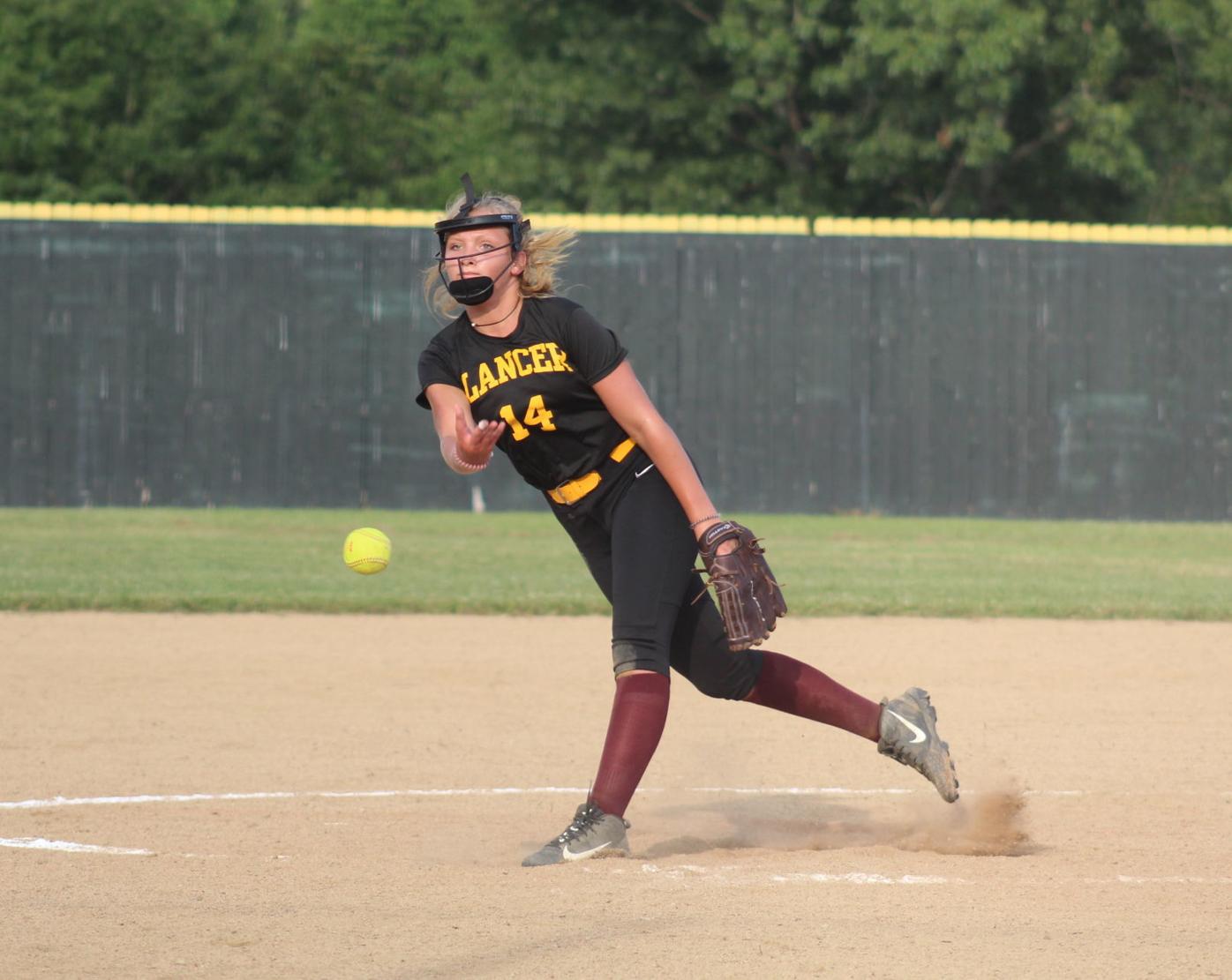 Federal Hocking’s Grace Roark pitches during Monday’s doubleheader at Athens. Roark pitched in both games for the Lancers.

Athens’ Ashleigh James delivers a pitch during a game against Federal Hocking on Monday. James, who will be a sophomore in the fall, threw a five-inning no-hitter.

Federal Hocking’s Grace Roark pitches during Monday’s doubleheader at Athens. Roark pitched in both games for the Lancers.

For a couple hours on Monday, Roger Bissell and the Bulldogs were able to get back to the business of having fun.

“One thing that was enjoyable was watching the girls comradery with each other,” Bissell said. “They love each other. They’ve missed it. They missed each other.”

The Athens softball team returned to their home field for the first time on Monday, turning in a pair of dominating victories against Federal Hocking.

The Bulldogs were victorious in both games, winning by scores of 16-0 and 15-0 over the Lancers.

Monday marked the return of sorts for softball. Athens is one of eight teams that will play games over the next five weeks in an effort to pick up some experience on the diamond after the regular spring season was eliminated due to the COVID-19 pandemic.

The games were organized over the last month by local umpires who were also looking to get back on the field. With most area softball players already into travel ball, the games will be played on Mondays and Tuesdays.

“This has been going for about a month then everybody finally committed so now we have eight teams doing two five-inning double headers, Monday and Tuesday,” Bissell said.

The games not only give teams a chance to return to some sense of normalcy, but to also pick up some experience that was lost during the spring.

Athens would have had only one senior — Katie Kish — on the 2020 team. The Bulldogs’ top two pitchers — Ashleigh James and Olivia Banks — would have been just freshmen.

While they can’t entirely make up for lost time, Athens will return every player who took the field on Monday against Federal Hocking. The Bulldogs won’t have any seniors next year, with junior Olivia Kaiser bringing back the most experience.

“I just wanted to see them together, to be honest with you, because I have a young team,” Bissell said. “I don’t have a senior coming back next year. It will be juniors, sophomores and probably a couple freshmen.”

The duo of James and Banks combined to hold Federal Hocking to a single hit on Monday.

James pitched a five-inning no-hitter in the first game, striking out 10. She walked the first batter of the game, then retired the next 16 batters. The only runner reached on a wild pitch after striking out swinging in the fifth.

Bissell said James — also a middle infielder — works hard at softball, and will be a fixture in the program for the next three years.

“Ashleigh doesn’t get rattled,” he said. “She’s a fighter and she’s smart. She’s going to be tough come her junior year. The kid works. She’s a workhorse. The amount of time and commitment that she puts into that craft right there, pitching, is second to none in my opinion.”

Banks was just as impressive pitching in the second game, which was called after four complete innings.

Federal Hocking’s only hit was a single up the middle by Danni Rhymer with one out in the fourth. Banks struck out seven, walking two and hitting one.

Offensively, Athens piled up 12 hits in each of its victories. The Bulldogs scored five runs in the bottom of the first of the opener, with three scoring on wild pitches.

Athens sent 17 hitters to the plate during an 11-run third to lead 16-0. Katey Ann Walburn, Autumn Hembree, Kayla Hammond, Kendra Hammond, Kaiser, Zoe Johnson and Tiffany Cunningham all had RBIs in the frame.

Athens picked up where it left off in the second game, scoring five runs in the opening inning. Walburn and Kendra Hammond each had RBI doubles while Mya Martin hit a run-scoring triple.

Athens added on in every inning, leading 9-0 after two innings. Banks hit an RBI single that inning, while Walburn and Kayla Hammond each added RBI doubles.

Athens scored four more in the third. Kaiser hit an RBI single and Banks an RBI double before Walburn’s two-run single pushed the lead to 13-0.

Two final runs scored in the top of the fourth, as Athens was the visiting team for the second game, for the 15-0 edge.

“Kaiser was on fire tonight,” Bissell said. “Olivia Banks, she’s going to be a stud on the offensive side. Zoe she was coming in as our JV player, caught the second game and she had a couple nice hits. I’m encouraged to see the overall growth of these kids.”

Federal Hocking’s Lilly Crowe started in the pitching circle and took the loss in the first game, with Grace Roark coming on in relief. Roark also started the second game, taking the loss, with Lexie Wilkes pitching in relief.

Athens led 5-0 on Tuesday against Belpre in the first game of a doubleheader before rain canceled the rest of the evening. James was through three innings, striking out eight. She had allowed just one hit and one walk, as well as going 1 for 2 at the plate with a run scored.

Kaiser also had two hits in as many at-bats against Belpre, scoring a run. Banks was 1 for 2 with two RBIs and a run. Walburn had a hit and RBI while Hembree and Kayla Hammond each had a hit and run scored. Kendra Hammond had a hit and two RBIs.

Athens will continue taking the softball diamond for the next month. Athens will also have home dates against Gallia Academy (July 14), Waterford (July 21) and Meigs (Aug. 4) while having road games at the NES All-Stars (July 13), Meigs (July 20) and Warren (Aug. 3).

The Bulldogs can’t get last spring back, but the summer games could go a long way toward helping the young squad make the most of the 2021 spring season.