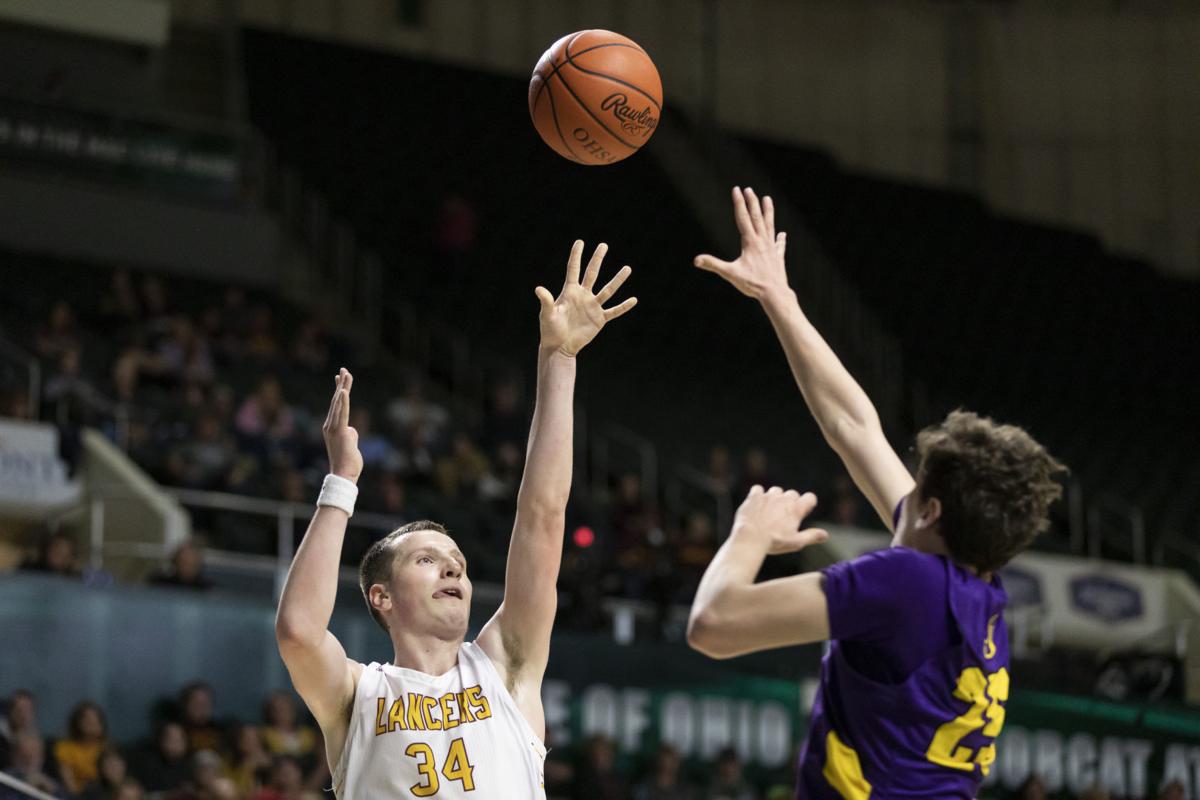 Federal Hocking's Bradley Russell puts up a shot against St. Joe's in a Division IV district semifinal in the Convocation Center on March 2. Russell scored 22 points in the game. Russell recently announced his decision to attend Muskingum University, where he will continue his basketball career. 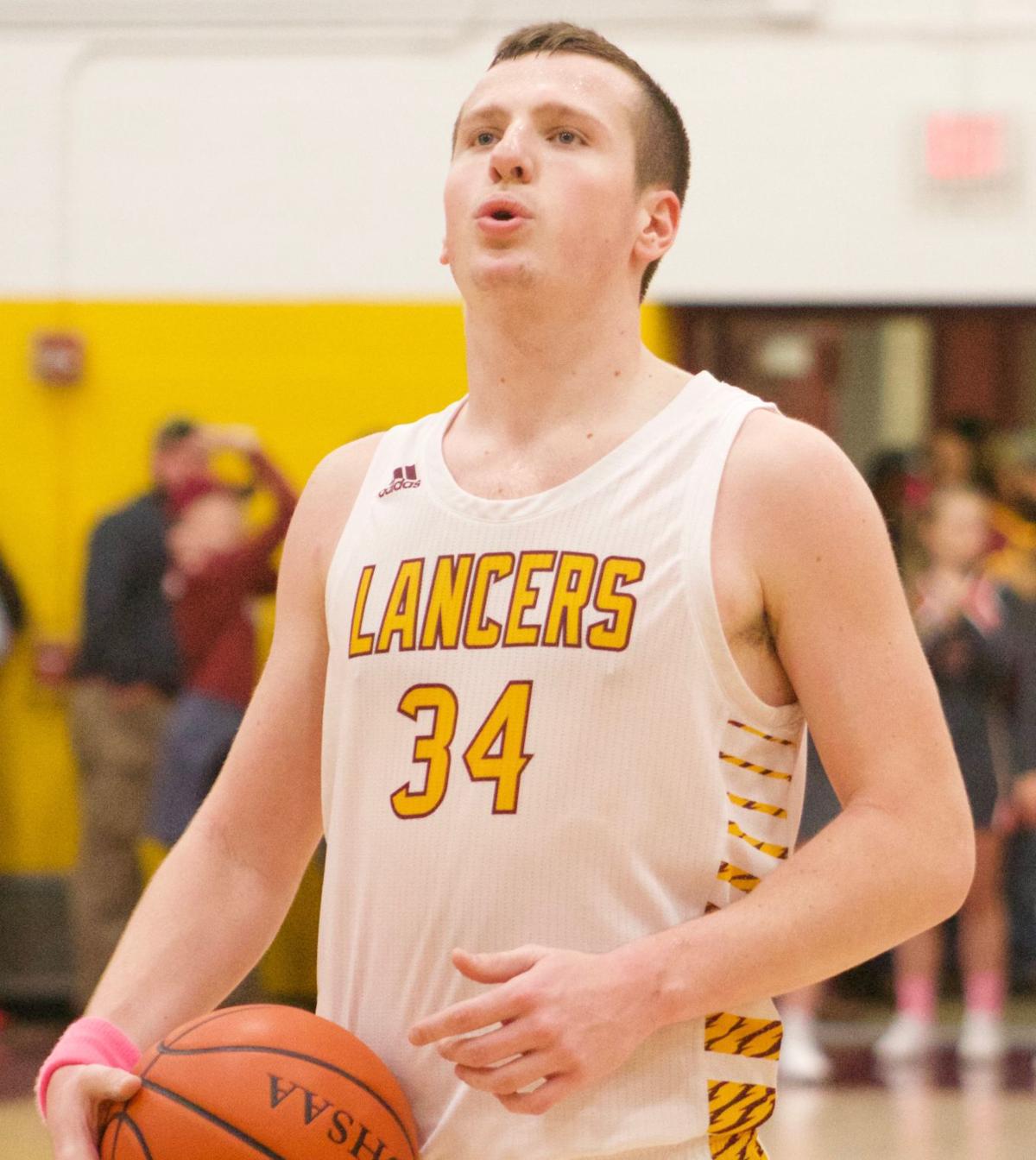 Federal Hocking's Bradley Russell prepares for a free throw during a game against Trimble on Feb. 7. Russell helped the Lancers win an outright Tri-Valley Conference Hocking Division title in 2020, earning a share of the league MVP with Miller's Colby Bartley.

Federal Hocking's Bradley Russell puts up a shot against St. Joe's in a Division IV district semifinal in the Convocation Center on March 2. Russell scored 22 points in the game. Russell recently announced his decision to attend Muskingum University, where he will continue his basketball career.

Federal Hocking's Bradley Russell prepares for a free throw during a game against Trimble on Feb. 7. Russell helped the Lancers win an outright Tri-Valley Conference Hocking Division title in 2020, earning a share of the league MVP with Miller's Colby Bartley.

Bradley Russell was a youngster the last time the Federal Hocking Lancers were able to play in the Convocation Center.

That appearance came in 2007, with coach Joe Butcher leading Federal Hocking to a league championship, and a sectional crown.

Russell was determined to make sure the Lancers were back before he received his high school diploma.

Russell was able to accomplish that goal last season as the Lancers had a turnaround for the ages.

Federal Hocking went 0-23 during Russell's freshman season. Cutting the nets down was far from becoming a reality.

Russell and his teammates put in the work, going 18-4 in the 2019-20 regular season. They were 15-1 in the Tri-Valley Conference Hocking Division, winning the program's first league title since 2013.

And of course, more nets were cut down when Federal Hocking claimed a sectional title with a 62-43 win over Waterford on Feb. 26.

Russell was able to take the Convo court on March 2, and while the Lancers lost a heartbreaker to St. Joe, 61-59, Russell can still graduate knowing he accomplished all of his team goals.

"It just feels amazing to know I was a leader on one of the best teams to ever go through Federal Hocking," Russell said. "My biggest dreams since I was a kid have been to cut down nets with my teammates and to play in the Convo. Being able to do both as a senior means the world to me, and no one can take it away. We earned it. Hard work pays off."

Russell now has a new goal to chase — help Muskingum University cut down the nets as well.

Russell recently announced his commitment to Muskingum, where he will continue his basketball career.

It concluded a recruiting process that started last summer for Russell.

"The first time Muskingum reached out to me was at a camp at Otterbein University in July going into my senior year," Russell said. "These camps really help players gain exposure to colleges and it helped me build my connection with Muskingum."

Russell's profile only grew during his monster senior season. He ultimately picked the Muskies over Heidelberg and Ohio Wesleyan.

"The big thing that sold me was the pitch from (head) coach (Travis) Schwab. The atmosphere he’s trying to build is the same as the one I came from in high school," Russell said. "I can’t ask for much more."

The Muskies went 8-17 a year ago, including 3-15 in the Ohio Athletic Conference. They are an NCAA Division III school located in New Concord.

Russell hopes to be a part of another program turnaround. After winning two games during his sophomore season, the Lancers won six games during Russell's junior season.

Most outside observers expected the Lancers to be improved in the 2019-20 season — the team brought back its entire lineup along with second-year coach Jonathan Thompson.

However, few outside of the Lancers' locker room could have foreseen the season Russell and his teammates posted. They beat Berne Union in the season opener — a Sweet 16 team in Division IV from the year before — and never looked back.

Federal Hocking's only bump in the road in league play was a January loss at Trimble. The Lancers won the rematch, a 69-67 heart-pounding win in front of a jam-packed house inside McInturf Gymnasium on Feb. 7.

Russell was unstoppable that night, scoring 26 points on 12 of 17 shooting with 12 rebounds, five assists, two steals and a blocked shot. The win paved the way to the eventual league title, as Trimble had won it outright the previous two seasons.

“It’s my senior year,” Russell said after the game. “I knew I had to step up for this big game. I was feeling really good coming into the game. I got nice and loose before the game. I felt really good tonight. I’m just happy we won. It didn’t matter how many I scored.”

"The biggest key for us to reach our potential last season was definitely family," Russell said. "I genuinely feel like each of my teammates were a brother I never had and the bond we formed can never be broken. Without that, talent doesn’t mean anything. It all has to come together smoothly."

Russell became the 11th Lancer to win TVC MVP honors in boys' basketball, the first since Tyler Thompson in 2010.

"Winning the Hocking MVP is a huge honor that isn’t possible without my teammates and my coaches pushing me to be my best daily on and off the court," Russell said. "It was one of those things that I never really thought about until I was told that I won it. With the season we had it wouldn’t have mattered to me if the award went to someone else, but it was awesome to win."

It was just a little more than two months ago that Russell took the Convocation Center court and fulfilled one of his life-long athletic goals.

Little did anyone know that night in early March that the country would soon be essentially shut down because of the COVID-19 pandemic. Russell and the Lancers played in front of packed gyms most of the season. The crowds have gone away for now, but Russell is still putting in work.

"I have been going to a court in Little Hocking, about 10 minutes from my house, and playing alone for an hour or two," Russell said.

Russell also said the Muskingum coaches put together a summer workout program that he began this month.

In the meantime, he's keeping busy.

"I have been roofing and doing construction work with my dad since school is out," Russell said. "I’ve basically treated the weird situation as summer and living my normal summer life — working, doing workouts, and relaxing."

Hopefully sometime soon, Russell will be able to make the drive from Stewart to New Concord to begin the next chapter of his basketball journey. He said there are many people who helped his high school basketball dreams become a reality at Federal Hocking.

"My entire family for all the love and support, coach (Jonathan) Thompson, Jeremy Tolson, and the rest of my coaches I’ve had for the work they’ve put in to make me a better and smarter player, and my teammates for pushing me to my limits both mentally and physically everyday."