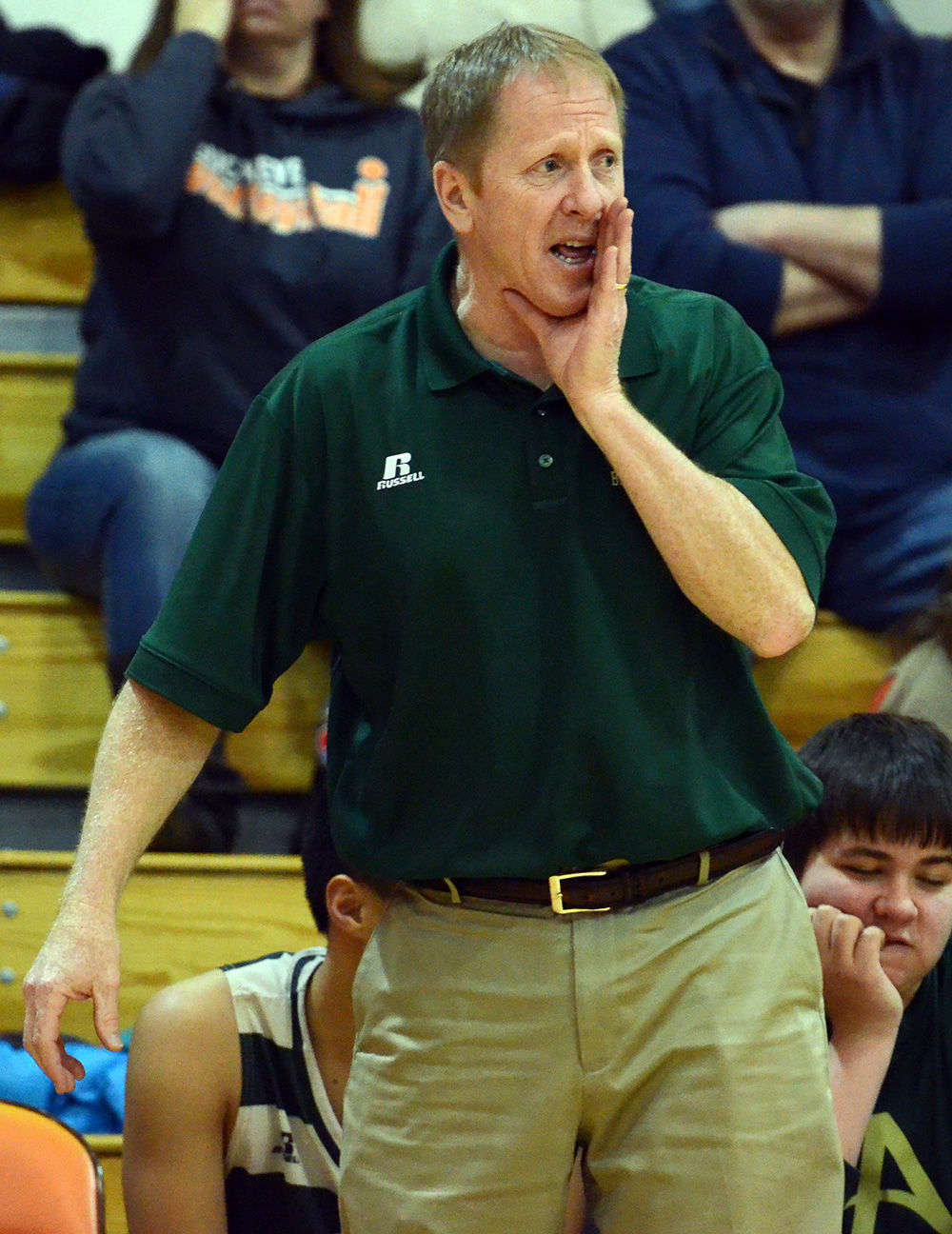 Jeff Skinner, seen here coaching a game with the Athens Bulldogs, was named as Alexander’s next boys’ basketball coach during Wednesday’s Alexander Local Board of Education meeting. Skinner led Athens to four Tri-Valley Conference Ohio Division titles and is a 1982 Alexander graduate. 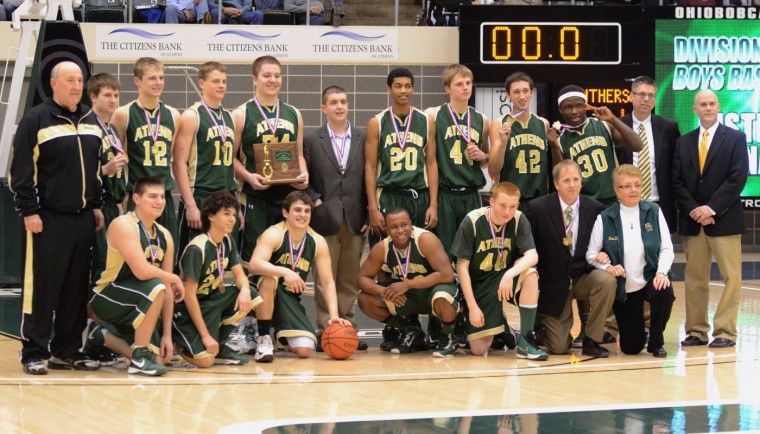 Members of the Athens Bulldogs pose for a team picture after winning a Division II district championship in 2013. Jeff Skinner (front row, second from right) was the head coach of the team that included future college athletes in Joe Burrow (10), Ryan Luehrman (12), Adam Luehrman (44), Ibi Watson (20), Zacciah Saltzman (front row, third from left) and Trae Williams (30). Skinner won 112 games in his final seven seasons with Athens, and will now take over the boys’ basketball program at Alexander High School.

Jeff Skinner, seen here coaching a game with the Athens Bulldogs, was named as Alexander’s next boys’ basketball coach during Wednesday’s Alexander Local Board of Education meeting. Skinner led Athens to four Tri-Valley Conference Ohio Division titles and is a 1982 Alexander graduate.

Members of the Athens Bulldogs pose for a team picture after winning a Division II district championship in 2013. Jeff Skinner (front row, second from right) was the head coach of the team that included future college athletes in Joe Burrow (10), Ryan Luehrman (12), Adam Luehrman (44), Ibi Watson (20), Zacciah Saltzman (front row, third from left) and Trae Williams (30). Skinner won 112 games in his final seven seasons with Athens, and will now take over the boys’ basketball program at Alexander High School.

Jeff Skinner admits he already had his ‘dream job’, when he led the Athens Bulldogs to a high level of success on the basketball court.

However, when the Alexander Spartans boys’ basketball job became a possibility, it provided Skinner with an opportunity that was decades in the making.

The Alexander Local Board of Education hired Skinner as its next boys basketball coach at its regular meeting on Wednesday.

After a four-year break, Skinner is back in coaching, and returns to his alma mater in Albany.

“When I got the Athens job, it was one of my dream jobs and I loved it, but I’ve been waiting on the Alexander job to open for 30 years,” Skinner said. “And every time it opened I was knee-deep somewhere else and committed and in love with where I was. The timing of this was good, albeit it took several years to occur.”

It is a job that doesn’t open often, as Skinner will be just the third head coach since the early 2000s. He’ll take over for Jim Kearns, who won 103 games over the last seven seasons. Kearns opted not to return after leading a senior-laden group — including his son J.K. Kearns — to a share of the Tri-Valley Conference Ohio Division title.

Blaine Gabriel coached the Spartans in the 11 seasons prior to Kearns’ run. Gabriel and Kearns combined to win 235 games while roaming Alexander’s sideline.

Skinner said he is ready to continue the Spartans’ basketball tradition.

“It is a community-based tradition without a doubt,” Skinner said. “I’ve had more phone calls and text messages in the last couple days then I can remember in recent memory from Alexander folks and well wishers from Alexander. That makes me feel very, very good.”

Skinner enjoyed a successful run as the coach of the Bulldogs, leading the program at two different times. His second stint was seven seasons, the final coming in the 2015-16 school year.

Skinner will forever be linked with some of the best athletes to come through Athens High School, coaching the likes of Ryan and Adam Luehrman, Griffin Lutz, Zacciah Saltzman and Ibi Watson.

Skinner also has the distinction of being Joe Burrow’s high school basketball coach for four seasons, the 2019 LSU Heisman Trophy winner and No. 1 draft pick of the Cincinnati Bengals.

Skinner said that he missed just about everything when it comes to coaching, but above all it was the relationships built with the players that he missed the most.

“From game night, to practices, to watching your team grow, to watching your young men grow, to interactions with other coaches, fans, officials, media — once you do that, and I got a lot of attention there for a while because we were so good — you really grow to love that stuff,” Skinner said. “Mainly the interactions with the young men and watching them grow as players and people.”

The chance to lead the Spartans didn’t become real for Skinner until after the season. Not only did Kearns step down, but his assistant coach for all seven years, Jordan Hill, didn’t apply for the job either.

“I can’t speak for coach Kearns, but I suspected he wouldn’t coach beyond J.K.’s senior year,” Skinner said. “I think that’s the commitment that Jimmy had made to Alexander schools. I suspected that he wouldn’t be coaching anymore, but I also suspected that coach Hill would be all over that job and ready to go after it. Me pursuing that job for a long time wasn’t even an option.

“Now that everything’s official, I have to hit the ground running,” he added. “Get going getting the basketball program ready.”

The Spartans will certainly have a different look next season. They posted a 16-8 record last year, losing in the sectional finals to Adena.

Six of the Spartans’ top seven players in that tournament game were seniors. That number didn’t even include J.K. Kearns, who suffered a season-ending knee injury in January.

Alexander will have a lot of question marks as to what its starting lineup will be, but one sure thing figures to be Kyler D’Augustino.

D’Augustino started all 24 games as a freshman, averaging 15 points, six rebounds and two assists per game. He’ll be one of the top returning players in the TVC-Ohio, even as a 10th grader.

“I’m anxious to see him myself so I can make my own decisions about him, but everything I’ve heard about Kyler and I’ve seen out of Kyler is terrific,” Skinner said. “He’s a young player that is probably without a doubt ahead of the game a little bit, as someone who’s a freshman. But if you want to play at the next level, and you want to be the kind of player I suspect he wants to be, then there’s always room for growth.”

The process of getting to know his new players will be challenging, due to the COVID-19 pandemic. The Ohio High School Athletic Association has closed all schools facilities to athletic workouts.

Under normal circumstances, Skinner would be able to meet with his new players face to face and prepare a full schedule of shootouts and tournaments in June.

There is no time table yet for when Skinner may be able to meet with his new players in person, but he says he’s working with the administration on how to proceed.

“I’ve done a little leg work so I have all my contact information,” Skinner said. “I’m going to work with the administration at Alexander to find out what’s appropriate in terms of the contact I’m allowed to make with them, not necessarily physically as in meeting with them, but letters or cards or zoom meetings or whatever. My first job is get to know the names and faces.”

The immediate future of high school sports is uncertain, but hopefully the situation will be better by the time the 2020-21 high school basketball season is ready to go. When that time comes, there will certainly be some interesting matchups.

Skinner will face off against Gabriel when the Spartans face the Nelsonville-York Buckeyes. And of course, both of Skinner’s meetings against his old team from Athens will no doubt be circled on the calendar.

The Athens-Alexander rivalry is one of the most intense battles in the area, but Skinner said he won’t get too caught up in being back on the Albany side of the matchup.

“I can’t really control how other people feel,” Skinner said. “I think that will be more of a conversation for the fans and the media. Wherever I’m coaching at, I’m going to give it everything I have. I was coaching at Athens all those years and I can’t say enough good things about the kids and the people I worked with. Alexander’s going to get the same exact effort from me.”

Skinner will continue his job as a social studies teacher at Athens Middle School.

The Spartans were able to break through in a couple different ways the previous two seasons. They advanced to the Division III district finals in 2019, the program’s first win in the district tournament since 1997. They followed that up by winning the program’s first league title since 2006 last winter, when Alexander and Athens tied for the top spot.

Skinner wants to continue building on that success.

“It’s going to be a really competitive, unpredictable league season I suspect,” Skinner said of the TVC-Ohio. “Our goal is to win a league championship. Even though I haven’t seen them, it’s Alexander. They’ve won a lot of league championships over the years, or competed for them, and we hope that that’s going to continue.

“It’s incredibly special to get a chance to coach at my alma mater,” he added. “Seriously, how many guys get the chance to be the head coach at Athens High School and Alexander High School. I’m grateful that the folks at Alexander have the confidence in my to give me the opportunity to do this.”