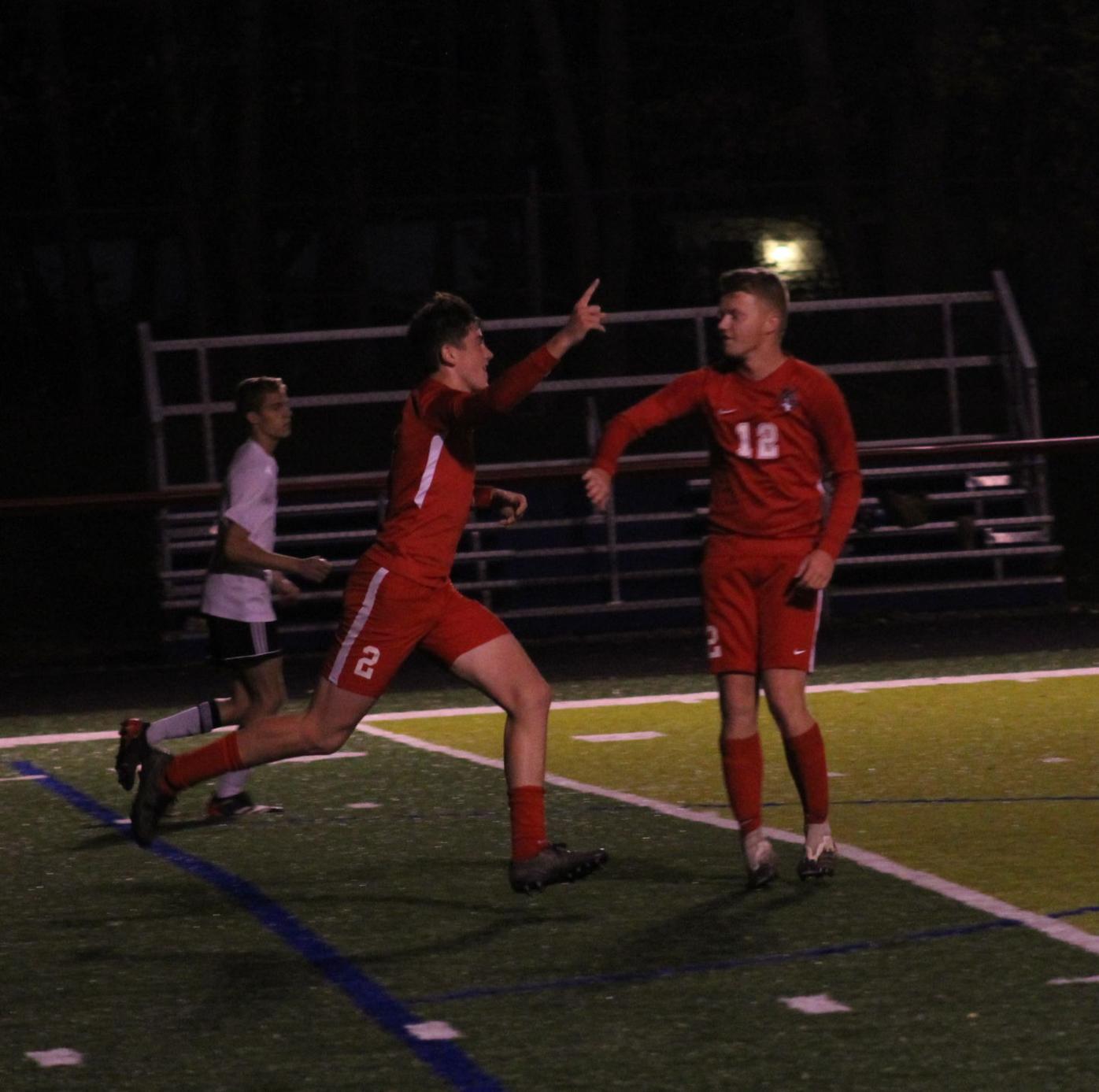 Alexander’s Parker Bolin (left) celebrates with Joe Trogdon (12) after Bolin scored the go-ahead goal in the Spartans’ 4-3 win over Unioto on Wednesday. Bolin scored twice in the regional semifinal game. 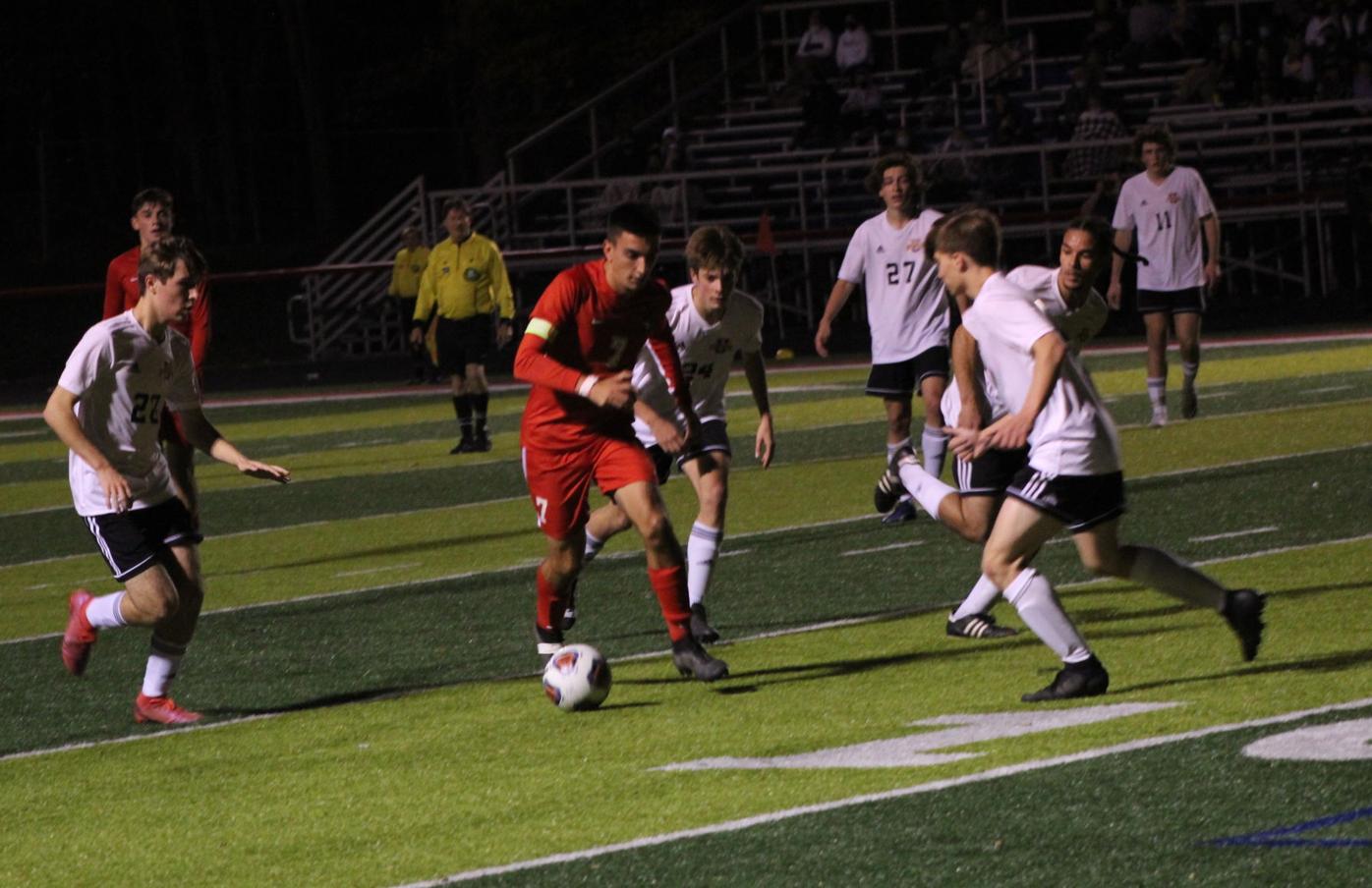 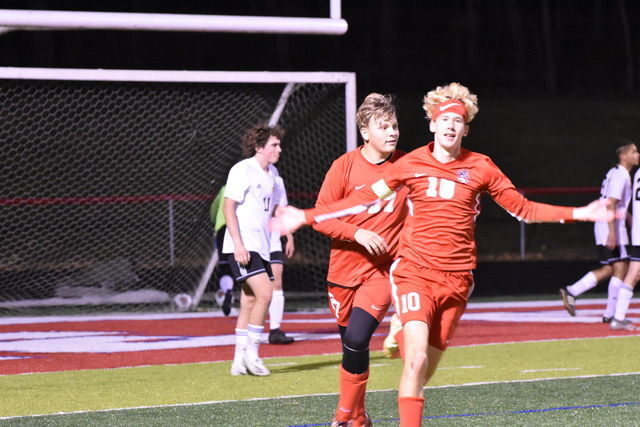 Alexander’s Trey Tyler Fritchley (10) celebrates after scoring a tying goal on Wednesday, while Jace Ervin (27) looks on. The Spartans defeated Unioto 4-3 to advance to the regional finals.

Alexander’s Parker Bolin (left) celebrates with Joe Trogdon (12) after Bolin scored the go-ahead goal in the Spartans’ 4-3 win over Unioto on Wednesday. Bolin scored twice in the regional semifinal game.

Alexander’s Trey Tyler Fritchley (10) celebrates after scoring a tying goal on Wednesday, while Jace Ervin (27) looks on. The Spartans defeated Unioto 4-3 to advance to the regional finals.

KINNIKINNICK — It may have been an uncomfortable way to start a regional tournament game, but Alexander coach Kirk Crow had no worries.

The Spartans gave up a goal just 15 seconds into a Division II, Region 7 semifinal against Unioto, eventually facing deficits of 2-0 and 3-1.

Alexander lived on the edge yet again on Wednesday, but will still live to fight another day. The Spartans rallied past the Sherman Tanks for a dramatic 4-3 victory at Zane Trace High School.

Alexander advances to the regional finals for the third time in program history.

“It means a lot for us and our program,” Alexander junior Parker Bolin said. “We fought all year for this. It comes from the heart, it comes from grit. Sometimes we get down, but we always find a way to fight back.”

This coming off the heels of scoring three second-half goals to erase a 2-1 deficit against Athens in last Saturday’s district championship game.

Alexander forced the issue the entire second half against Unioto, finally getting the Tanks’ defense to crack.

It started with senior Tyler Fritchley. After the Spartans applied pressure with shot attempts against Unioto goal keeper Micah Geise, Fritchley was finally able to power a shot past the sophomore from in front of the goal.

The scored tied the game at 3-3 with 20:45 remaining, and was the first time since the opening seconds in which Alexander hadn’t faced a deficit.

Crow said that Fritchley called the goal at halftime.

“At halftime, Tyler goes, ‘coach I’m feeling one,’” Crow recalled. “And he scores that goal, and he goes, ‘I told you I was feeling one.’ He’s stepped up huge this last month of the season.”

The Spartans continued to apply the pressure, eventually resulting in a corner kick.

Austin Shields, the program’s all-time assist leader sent the kick toward the goal.

Bolin was there to head it into the net with 14:13 remaining.

“Saw the ball coming in, I knew we needed a goal,” Bolin said. “We were tied and just found a way to get a head on it. Knew we needed one.”

The goal touched off a wild celebration for the Spartans. It was Bolin’s second goal of the game, and one of the biggest assists of Shields’ standout career.

“I said, ‘buddy we need one right now’ and he (Shields) puts it on the back side for us and we put it in,” Crow said. “We have guys that just make big plays.”

The pressure suddenly shifted entirely to Unioto’s corner. The Tanks tried desperately in the closing minutes to find a tying goal, but would come up short.

A final kick toward the goal sailed high and out of play, giving Alexander a goal kick with 22 seconds on the running clock.

The bench and the Alexander fans officially began the celebration at that point, the closing seconds ticking away on the 17th victory of the season.

“We knew we had it in us,” Bolin said. “It’s all about sticking together and getting through it together.”

Alexander had 12 shots in the game, Geise coming up with five saves.

Clayton Williams made three saves for Alexander, as Unioto had just five shots in the game and only one in the second half.

The Spartans were playing without center back Isaac York, who is out for the season after an injury suffered against Athens.

Elijah Robe once again helped anchor the defense in York’s absence, as Alexander held Unioto’s leading scorer Ethan Kerns without a score on the night.

“Our key was to stop them from distributing from the middle and I felt like we did a good job of that in the second half,” Bolin said. “Really just wanted to shut down any opportunity they get, and put it on the counter attack.”

Alexander won at Unioto 5-3 just over two weeks ago in the regular season finale, but had to rally back from a 2-0 deficit.

History repeated itself, as Unioto proved to be a tough out.

The Spartans weren’t able to clear a ball in the opening seconds, and Lucas Hanes was able to get around the defense. The freshman scored with only 15 seconds off the clock for a 1-0 lead.

The Tanks led 2-0 when River Pettigrew, another freshman, scored on a header in front of the net just 11 minutes and 11 seconds into the game.

Bolin got Alexander on the board with his first goal, also on a header, on a set play from Fritchley after a Unioto infraction.

Unioto didn’t flinch though. Pettigrew was able to get a one-on-one opportunity in front of the net, scoring his second goal for a 3-1 lead with 7:27 left in the opening half.

A big sequence occurred before halftime, as Unioto missed an opportunity to possibly go ahead 4-1, instead seeing Alexander get the goal before halftime.

Jace Ervin launched a throw-in toward the back post of the goal, resulting in a score for Kyler D’Augustino with 2:37 on the clock.

That goal allowed Alexander to go into halftime down just 3-2, and the rest was history.

“We’ve been down two goals before, but 3-2 is something, especially when you scored the last goal of the half, you have that kind of momentum taking you into the second half,” Crow said. “You just feel better about the situation.”

Alexander advances to the regional finals for the second time in the last four seasons. The Spartans will face Dover — a 1-0 winner over New Philadelphia — on Saturday at 3 p.m. at Athens High School.

Alexander is already enjoying one of its top seasons in school history, and now will play for a spot in the state tournament.

“We definitely want to make it all the way,” Bolin said. “It means a lot to us, just can’t explain it.”