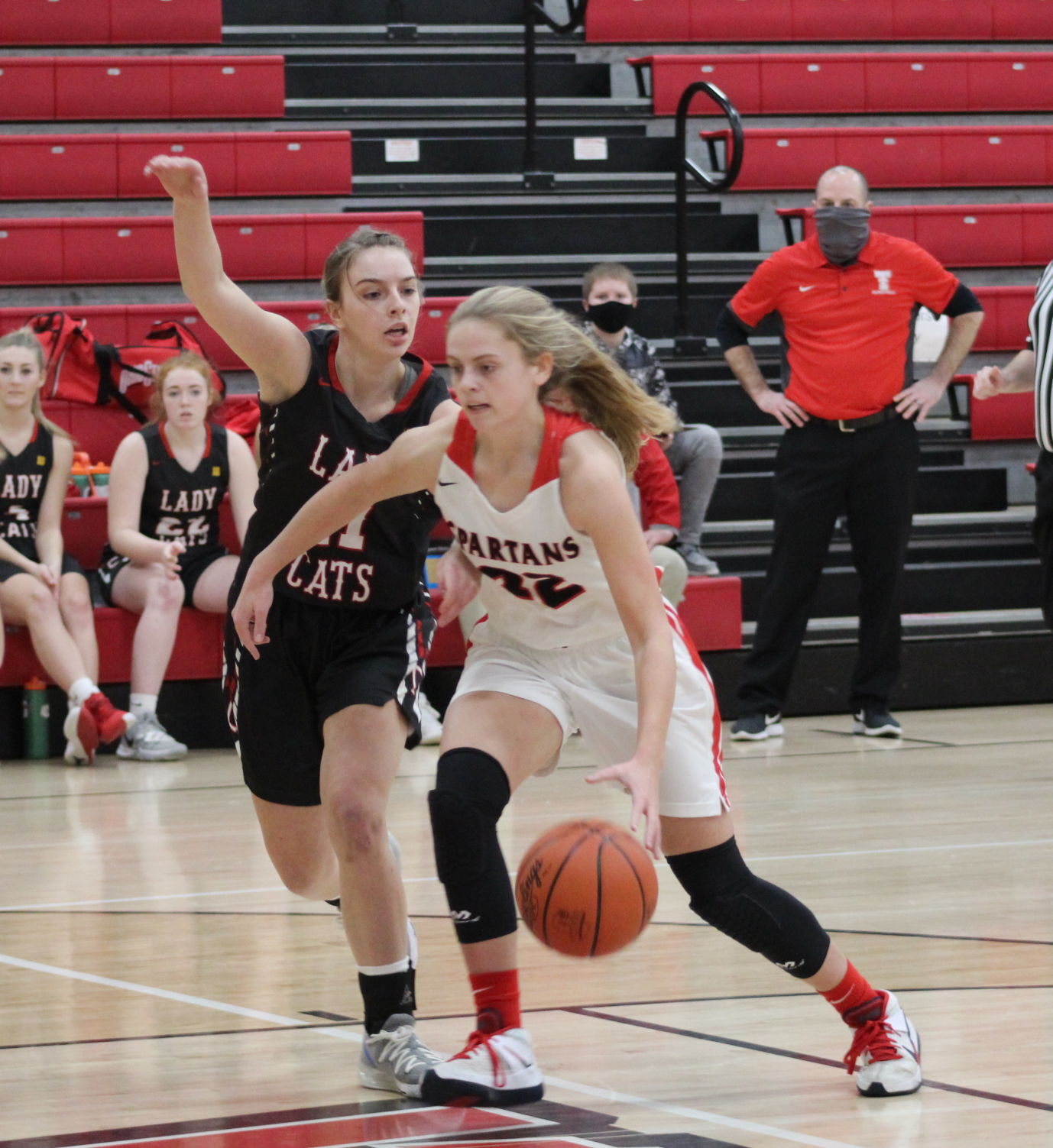 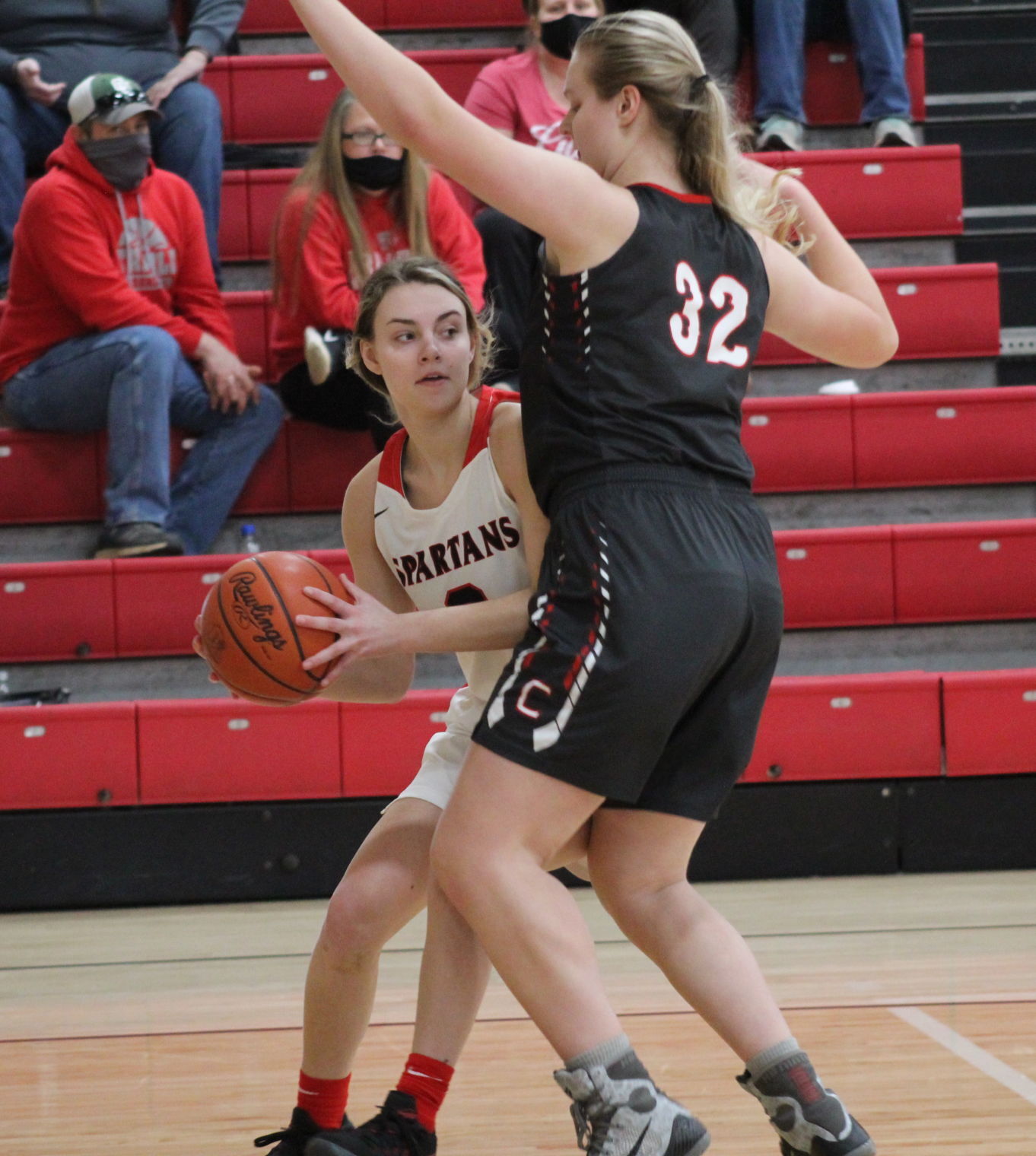 Alexander’s Karsyn Raines looks to pass around Trimble’s Jayne Six (32) during Saturday’s game in Albany. Alexander improved to 7-0 with a 50-41 win. 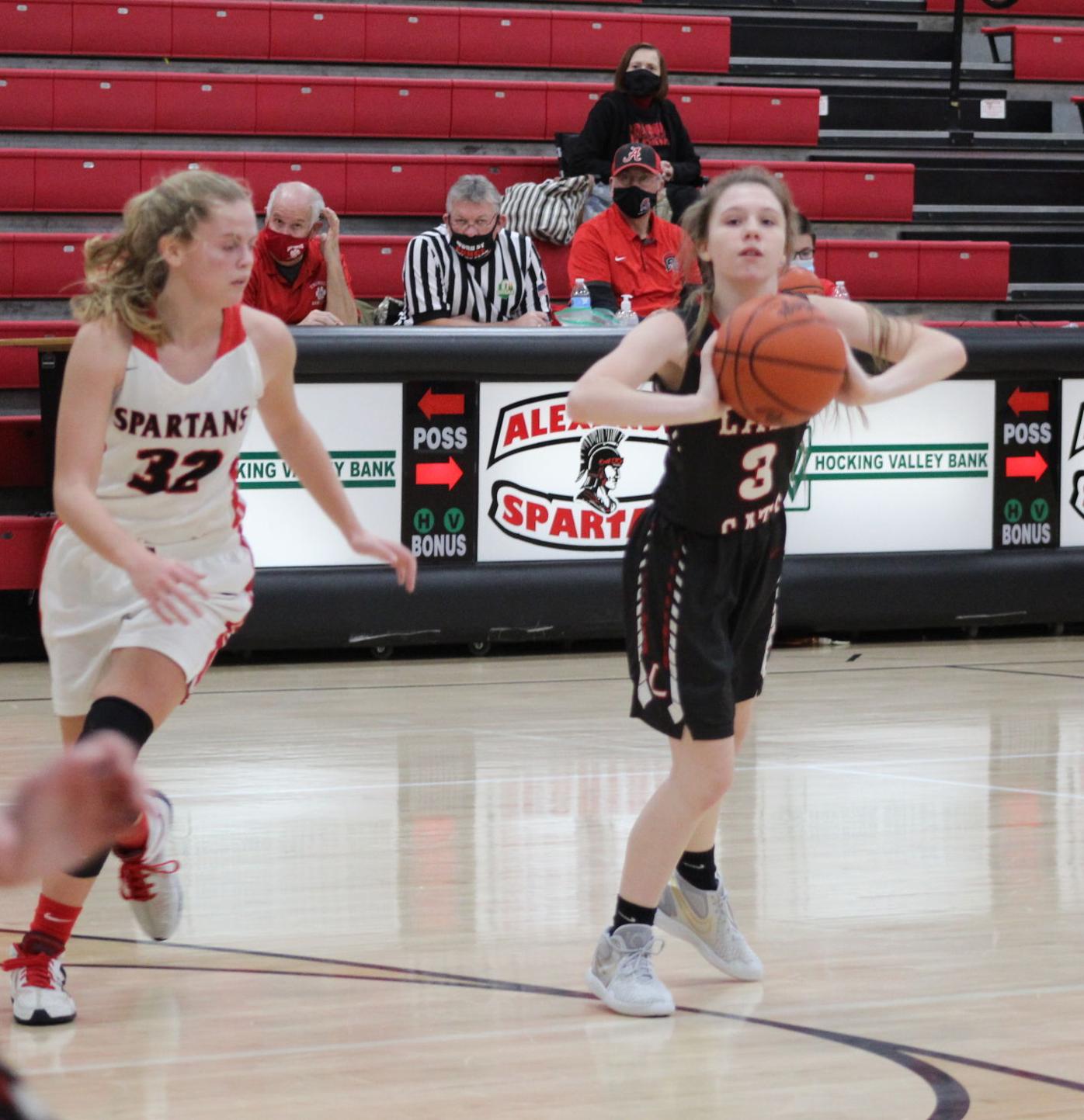 Alexander’s Karsyn Raines looks to pass around Trimble’s Jayne Six (32) during Saturday’s game in Albany. Alexander improved to 7-0 with a 50-41 win.

ALBANY — The Trimble Tomcats were in position for a huge road win on Saturday.

Alexander’s Marlee Grinstead and Jadyn Mace stole it away.

Grinstead and Mace came up with key plays down the stretch, as Alexander defeated Trimble 50-41 in a battle of unbeaten teams.

Grinstead finished the game with 23 points, 11 rebounds and seven steals, handing Trimble (8-1) its first loss of the season.

“We finally got a couple stops late,” Alexander coach Jeff Grinstead said. “Marlee was able to get to the bucket. We drew some fouls. We actually finally started making free throws down the stretch.”

With Trimble still leading, 41-40 after two Mace free throws, the Tomcats missed multiple shots inside the paint on offensive rebounds with a chance to extend the lead.

“What did we have? Five or six layups on that one trip where we couldn’t find that bottom of the rim,” Trimble coach Joe Richards said. “That would have put us up three, that would have been a big momentum shift again.”

Marlee Grinstead eventually gave Alexander the lead back, scoring on a baseline drive for a 42-41 edge with 1:02 left.

It was Mace’s turn to make a big play. She helped draw an offensive foul on Trimble’s Jayne Six, when Six was called for pushing off on her way to a shot attempt, giving Alexander the ball back with 53.1 seconds left.

Mace was tasked with guarding the 6-foot-2 Six most of the game after Kara Meeks had early foul trouble. Despite giving up at least six inches in height to Six, Mace was able to limit Trimble’s junior center.

“She loves that challenge,” Jeff Grinstead said. “She is the kind of kid that loves the challenge. We went in the locker room and talked about it afterwards and I said ‘You loved that don’t you?’ She just smiled and shook her head because that’s who she is.”

Mace would eventually make a pair of free throws for a 44-41 Alexander lead with 32.0 seconds remaining.

The scene shifted back to Marlee Grinstead. The Tomcats went to inbound the basketball, but didn’t take Grinstead’s close presence into account.

Grinstead jumped in front of the pass for a steal, denying Trimble a shot on the offensive end of the court.

“That was a big play,” Jeff Grinstead said. “That was a huge turning point in the game when she slipped up there and took that pass.”

Marlee Grinstead was fouled and made two free throws for a 46-41 lead with 28.4 seconds left, putting the Spartans firmly in control.

“Credit to them,” Richards said. “I think they just out-executed us and they played a little bit better in that last two-minute span.”

Mace made four more free throws in the closing seconds for the nine-point margin.

Alexander’s late comeback spoiled Trimble’s initial fourth-quarter surge. Trailing by nine points, Young made a pair of 3-pointers to start the quarter and lift Trimble to within 35-32.

“Gave us a little adrenaline push,” Richards said of Young’s 3s. “Made a couple stops on defense. Kept executing on offense.”

Young assisted to Briana Orsborne for a shot in the lane to cut Alexander’s lead to a single point, 35-34.

Marlee Grinstead answered on the other end when she made an open 3-pointer, temporarily slowing Trimble’s run down.

Trimble kept coming with Young’s drive, then Orsborne’s corner 3-pointer with 2:52 left. The Tomcats were ahead for the first time in the game at 39-38, setting up the final finish.

The Tomcats were without point guard Laikyn Imler. Trimble had to move Young to point guard and move Emily Calentine (four points, two assists) into the starting lineup.

“Obviously, she’s one of our big guns,” Richards said of Imler. “Knowing that, we’re frustrated with the way the game ended the last two or three minutes, but I thought our girls played their hearts out.”

It was a renewal of an old Tri-Valley Conference rivalry, as Trimble and Alexander used to compete in the same league. The two Athens County titans played an entertaining game on Saturday, one that will help both sides as they battle for league titles over the next month.

“This is why we scheduled it,” Richards said. “We knew they were going to be pretty good. We knew we would be pretty good and this is a game you set up to get you ready for February and March.”

Added Jeff Grinstead, “That was something we needed. My heart didn’t need it, but my team needed that. Our coaches needed that. We needed to play a good, close game where we had the lead, then we went behind, then we come back. I’m really proud of the kids and how they played today.”