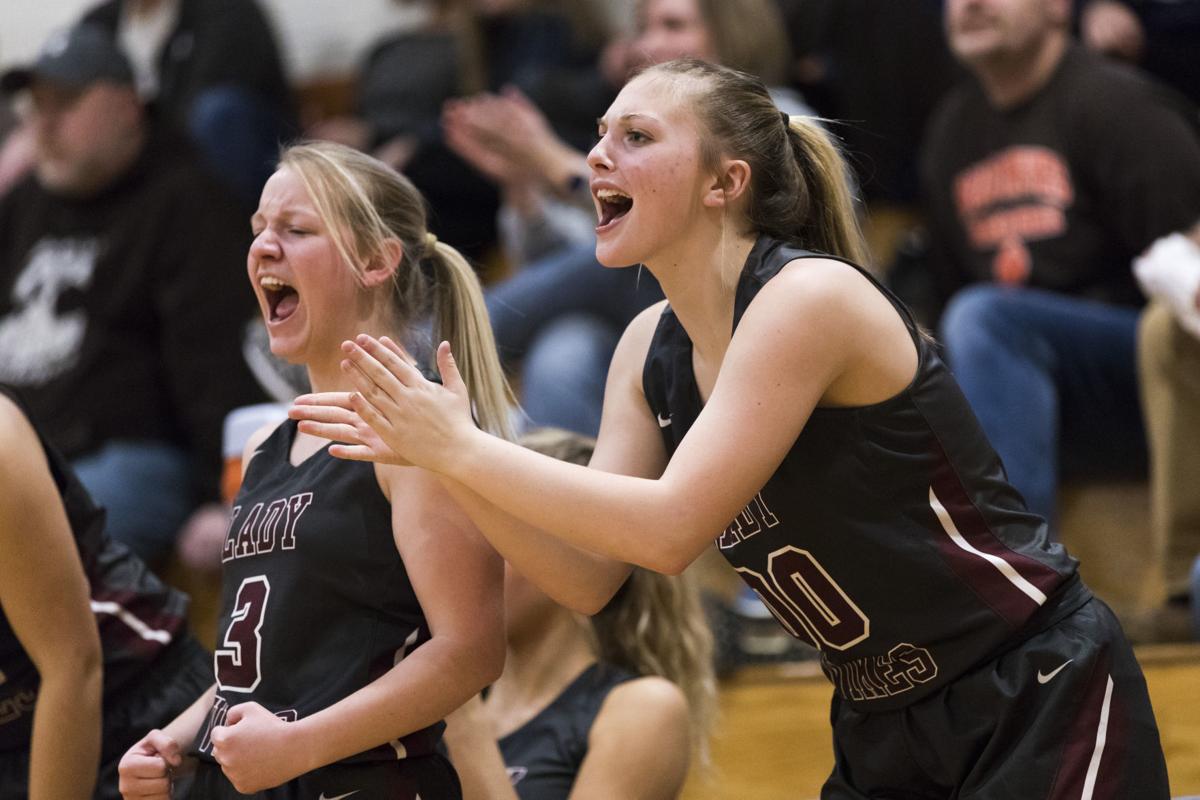 Vinton County’s Emily Kite (3) and Chloe Haybron (00) celebrate from the bench during the Vikings’ 74-59 win at Nelsonville-York on Thursday. The Vikings are two wins away from an outright Tri-Valley Conference Ohio Division title. 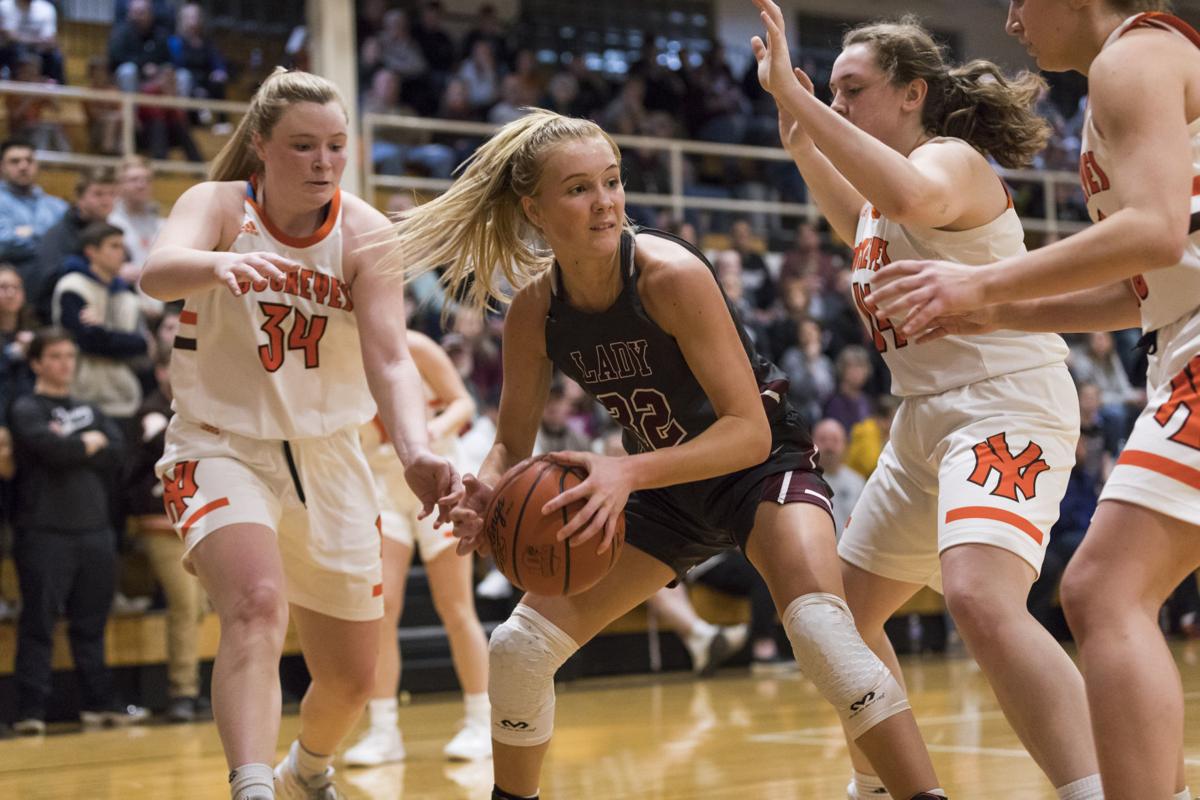 Vinton County’s Emily Kite (3) and Chloe Haybron (00) celebrate from the bench during the Vikings’ 74-59 win at Nelsonville-York on Thursday. The Vikings are two wins away from an outright Tri-Valley Conference Ohio Division title.

NELSONVILLE — The Nelsonville-York Buckeyes inserted themselves into the race for the top spot in the Tri-Valley Conference Ohio Division when they pulled off an upset win at Vinton County earlier in the month.

In front of a big crowd at Ben Wagner Gymnasium, the Vikings were able to gain a measure of revenge, and likely another league championship in the process.

Vinton County played a flawless third quarter, surging ahead of Nelsonville-York for a 74-59 victory on Thursday.

The win allows the Vikings (15-5 overall) to move to 9-1 in the TVC-Ohio. Nelsonville-York (14-4 overall) falls to 7-2 in league play, and will need a monumental upset to get back in the race.

Vinton County will win a third consecutive outright TVC-Ohio title as long as it defeats River Valley and Wellston next week, and both games will be played in McArthur.

The Buckeyes ended the Vikings’ 30-game TVC-Ohio winning streak earlier in the season, but the Vinton County was than ready for the rematch.

“We were dialed in,” Vinton County coach Rod Bentley said. “These kids spent the time and studying and just focusing on the game plan. They were as dialed in as I’ve seen them all season and I’m happy at this point to be where we are.”

The Vikings looked like a team ready for the postseason, outscoring Nelsonville-York 27-6 in the third quarter on their way to 49 second-half points.

“We’re playing obviously for the league which I feel like we have a good chance of winning down here tonight,” Bentley said. “But the second part of the season, these kids are focused for us.”

The Buckeyes were in the mix with the Vikings the entire first half, forcing a 16-16 second-quarter tie and trailing just 25-21 at the break. However, they were held to six points in each the second and third quarters, allowing Vinton County to put the game away by the start of the fourth.

“Unfortunately, we had some defensive breakdowns,” N-Y coach Bobby Cassady said. “Offensively, I thought we were a little timid at times. That third quarter really hurt us.”

That quickly changed in the third quarter, consecutive Lacie Williams 3-pointers pushing the lead up to 33-23. Morgan Bentley’s 3-pointer gave the Vikings three straight triples, and a 36-23 edge.

The onslaught continued as Vinton County scored 15 straight points to lead 45-23 after another Morgan Bentley trey.

The Vikings made 5 of 8 3-pointers in the third, Bentley making all three of her long-range attempts.

“We made some (halftime) adjustments,” Rod Bentley said. “We mixed it up. Went to some more zone, stayed back to our man to man, made some personnel adjustments.”

The Vikings did a little bit of everything in the third quarter, making 10 of 16 shots from the field, as Cameron Zinn also was a terror in the paint with eight points scored.

“When you put five girls out there that can all handle it, all shoot it, it makes it tough to defend,” Cassady said. “I’ll give Vinton County credit, they made some good adjustments from game one to attack our 3-2 zone. That hurt us a little bit. Just learn from this one and move on.”

The Vikings continued to lead by 27 points in the fourth, 58-31 after a Rylee Ousley free throw with 4:25 left.

A silver lining for the Buckeyes was a 32-point fourth quarter, as they played the game out to the end.

Joscelyn Heller made a trio of 3-pointers in the final quarter, ultimately finishing with 15 points.

“I told them, you guys can shoot it,” Cassady said. “You just have to have the confidence in yourself. We just proved that we can shoot it well. We just needed that more in the third quarter and the first half.”

The Buckeyes weren’t able to come out on top against the powerful Vikings, but were still able to play in front of big crowd at home against a very good opponent. Cassady hopes they can learn from the experience as the Division III tournament looms.

“This was as close to a tournament game as it gets, as far as the atmosphere and everything,” Cassady said. “I thought it was a great opportunity to play a game and improve from. Everything I want to accomplish this year is still on the table. There’s a lot of really good D-III teams, including Wheelersburg, who just beat Vinton County. So there’s a lot of great teams in D-III that we’re going to have to beat to win a sectional title. Sometimes you learn more from a loss. I’m sure this will pay off in the long run.”