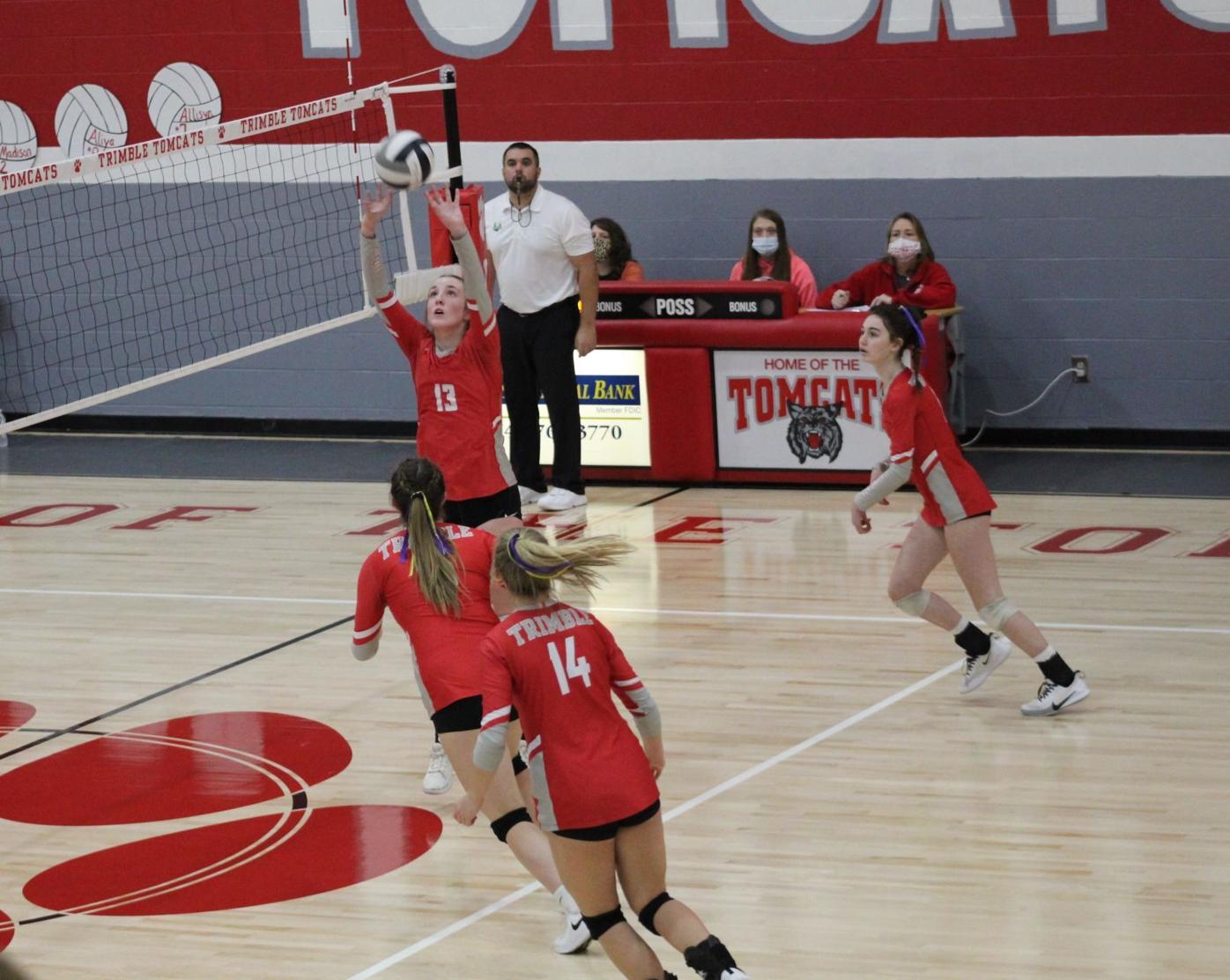 Trimble’s Jacie Orsborne (13) passes the ball as Briana Orsborne (bottom, left), Adelynn Stevens (14) and Faith Handley (right) look on. The Tomcats advanced to the district finals with a 3-0 win over Beaver Eastern. 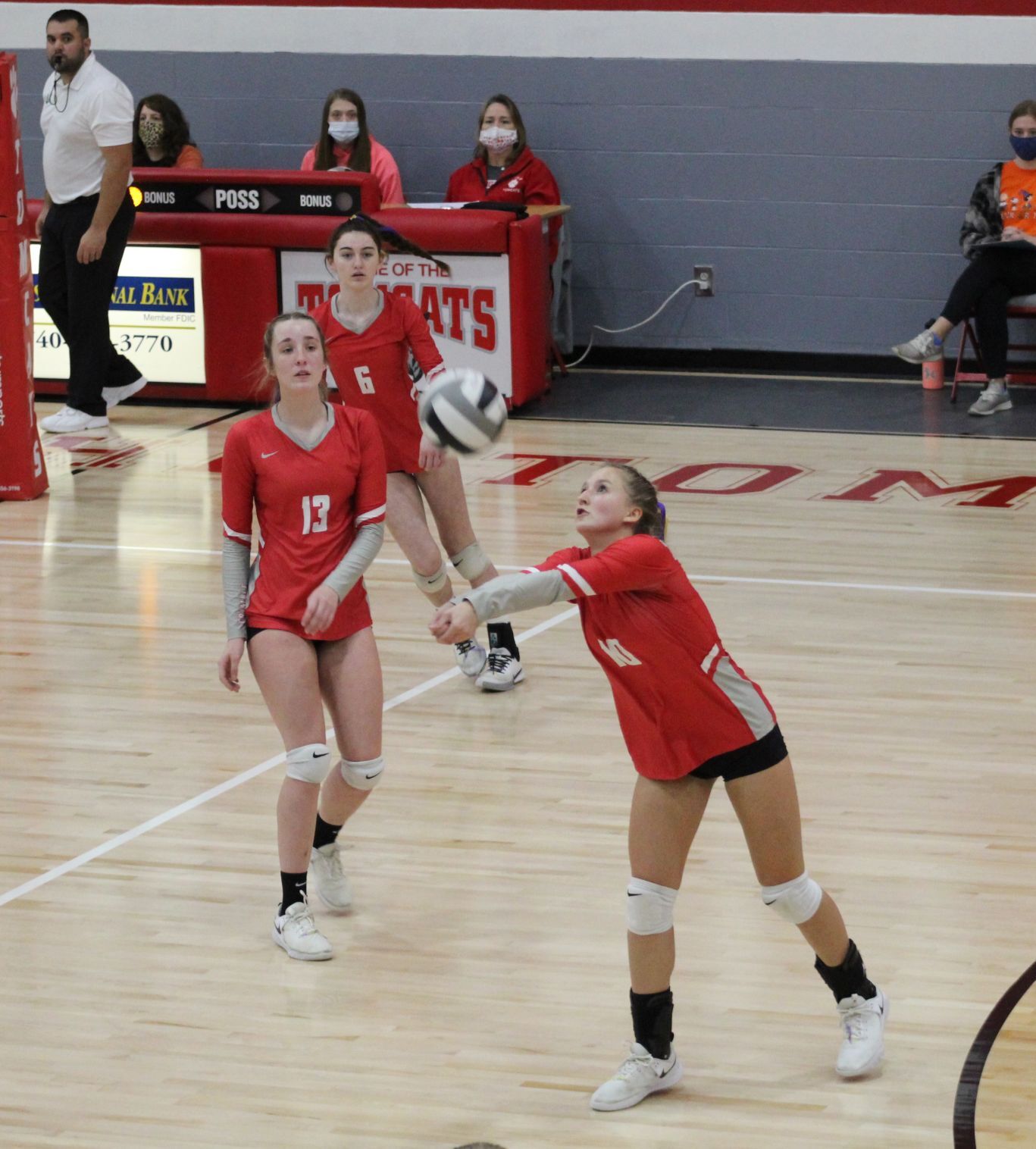 Trimble’s Laikyn Imler (10) passes the volleyball at Jacie Orsborne (13) and Faith Handley (6) look on. Imler had 11 kills in Trimble’s 3-0 win over Beaver Eastern on Thursday.

Trimble’s Jacie Orsborne (13) passes the ball as Briana Orsborne (bottom, left), Adelynn Stevens (14) and Faith Handley (right) look on. The Tomcats advanced to the district finals with a 3-0 win over Beaver Eastern.

Trimble’s Laikyn Imler (10) passes the volleyball at Jacie Orsborne (13) and Faith Handley (6) look on. Imler had 11 kills in Trimble’s 3-0 win over Beaver Eastern on Thursday.

GLOUSTER — The Trimble Tomcats continued to add to their resume on Thursday with another impressive performance.

The Tomcats won their 20th game of the season, beating Beaver Eastern 3-0 inside White Gymnasium in a Division IV district semifinal.

Trimble advances to the district finals for only the second time in program history after the 25-14, 25-10, 25-11 victory over the Eagles.

The Tomcats are experiencing a lot of program history in 2020, but head coach Shelly Lackey said it’s nothing unexpected for her talented group of athletes.

“Just an expectation,” she said. “I think some people are excited, but to me it’s just an expectation. This is what they said they wanted to do. It’s our job to prepare them and they’re the ones that do it.”

Trimble, the No. 2 seed in the Division IV bracket, had little trouble against No. 10 Eastern.

The Eagles compete against tough competition in the Southern Ohio Conference. They’re a program with a rich history, and played in the state tournament as recently as 2012.

Eastern (8-16) only dressed nine players and was no match for the powerful Tomcats (20-4) in the district tournament however. Trimble trailed 6-3 in the opening set, but never trailed again at any point in the match once it went ahead 9-8.

“I think when they first started, they started slow,” Lackey said. “But once they settled in they started pressing and realized that was a little bit of fun. Every kid I thought pressed tonight and pressed well.”

Jacie Orsborne (30 assists) had plenty of offensive options at the net.

On the other hand, Eastern only had one ace as Trimble libero Lexee Fouts led an all-around solid defensive effort.

Lackey also noted the defense at the net, as Trimble had numerous blocks to thwart Eagle attacks.

“When you’re hitting the way that we’re hitting and you’re pulling that many blocks, that’s pretty dominate,” Lackey said. “It feels pretty good because we’ve been keying on a lot of that stuff and tonight we got to see that.”

The opening volleys of the match were Eastern’s only moments of momentum, as the Eagles had leads of 4-1, 5-2 and 6-3 after Andee Lester’s kill.

Lackey used a timeout early in the set, and Trimble responded.

Campbell’s kill gave Trimble a 12-11 lead, starting a 5-0 run that changed the complexion of the match for good.

Eastern never got going in the second set, with Trimble jumping ahead 6-1. The Tomcats’ lead grew all the way to 17-4 after Briana Orsborne’s kill.

Trimble then jumped ahead to leads of 3-0 and 7-2 in the third set, determined to quickly end the contest.

Eastern did rally to within 8-6, but Trimble eventually went ahead 18-6 after another Briana Orsborne kill.

Jacie Orsborne’s ace pushed the lead to 20-8, and Handley’s ace provided the winning margin of 25-11 in a match that only lasted 50 minutes.

“I know that kid is only a freshman, but I think she’s ranked pretty high up in Max Preps on aces,” Lackey said of Handley. “I know she’s always good at that.”

Up next is a rematch with Tri-Valley Conference Hocking Division rival Waterford.

The Wildcats, a No. 3 seed, swept No. 6 Miller in another district semifinal on Thursday.

Waterford had either won outright or shared seven consecutive TVC-Hocking titles before the Tomcats wrestled it away in the regular season. Trimble swept the season series, but will need to beat the Wildcats a third time for the district crown.

Trimble will be in search of the program’s first district championship. A shot at more history will take place at Southeastern High School on Saturday at 6 p.m.

“Hats off to these kids for working so hard this whole season.”