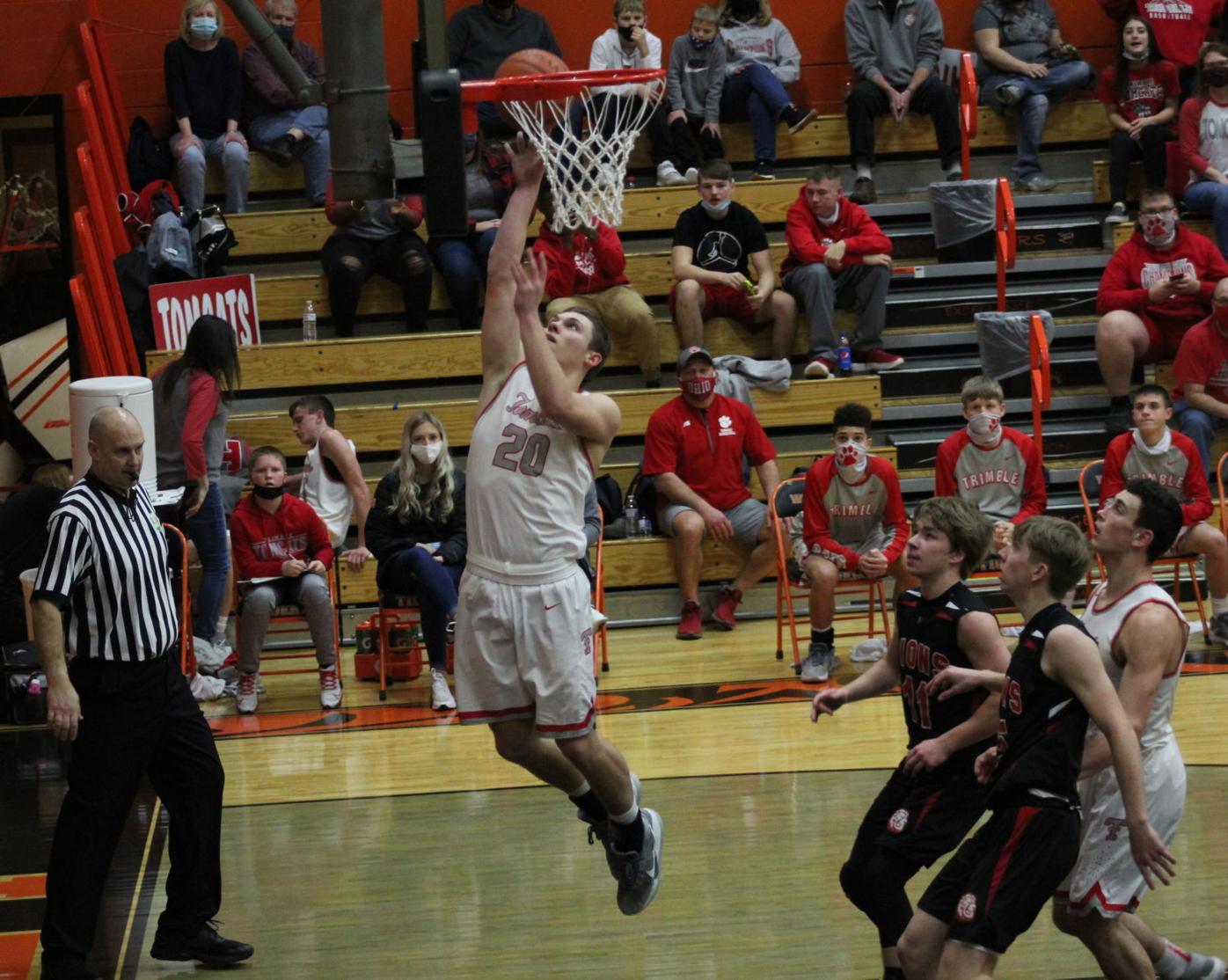 Trimble’s Bryce Downs scores at the rim during Saturday’s Division IV district final at Waverly. Downs had 18 points in Trimble’s 59-48 win over Fairfield. 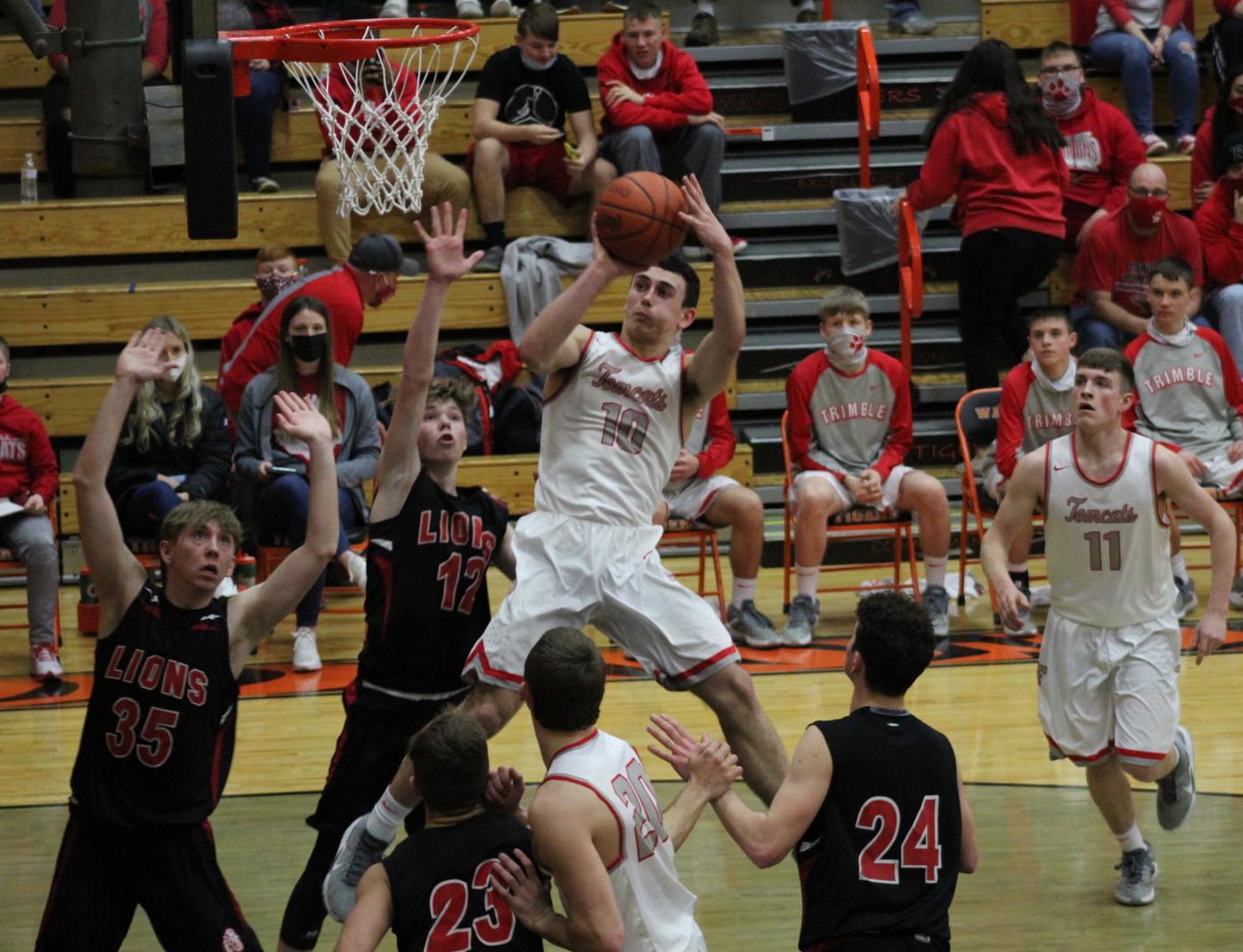 Trimble’s Bryce Downs scores at the rim during Saturday’s Division IV district final at Waverly. Downs had 18 points in Trimble’s 59-48 win over Fairfield.

WAVERLY — The Trimble Tomcats were presented their Southeast District championship trophy on Saturday, and there was no wild celebration, no hooting and hollering with the trophy raised high in the air.

Instead, Blake Guffey and Tyler Weber each held a side of the trophy as the rest of the players lined up for pictures, the Tomcats wearing straight faces as their friends and family captured the moment from the stands.

Trimble was all business, from the pregame warmups, to the game itself and even to the postgame celebration.

“We’re never satisfied,” Trimble junior Blake Guffey said. “When we’re satisfied we’ll maybe get to state, but right now we still have a lot more work to do.”

The Tomcats are heading to the regional tournament for the eighth time in program history, including for the fourth time in seven seasons under head coach Howie Caldwell.

“To be honest with you, I’m kind of speechless and that doesn’t happen very often,” Caldwell said. “So proud of the players. They make so many sacrifices it’s unbelievable.”

The Tomcats have the expectation to succeed in the district tournament. The bar was raised when Caldwell took over the program nearly seven years ago.

Guffey and the rest of his classmates are doing their part to keep the tradition building. The Tomcats start five juniors that have come through the program together.

“During the summer we would just play with each other at open gyms and we would go and play ball at our houses together. We have team chemistry,” Guffey said. “That team chemistry just keeps on building and building throughout football, basketball, baseball, whatever it is.”

The Tomcats (20-3) had to work for the win over the Lions (10-12), who won three tournament games, including two on the road, to get to Saturday’s final. It’s the second season in a row Trimble and Fairfield have matched up in a district championship game.

Fairfield jumped ahead 12-6 in the first quarter, and were as close as two points in the fourth.

“We had some turnovers that were unforced,” Caldwell said. “We couldn’t get in our offense the way that we wanted to get in our offense. But Leesburg’s not a bad club. They force you into doing things that a lot of clubs don’t do. So we persevered.”

The Tomcats persevered thanks in large part to double-double efforts from Guffey and Bryce Downs.

Guffey had 22 points, 11 rebounds, five assists, a steal and a blocked shot.

Guffey is already a three-year starter, thousand-point career scorer and second-team all-Ohio performer a season ago.

Downs is a first-year varsity starter. An all-Ohio football player last fall, Downs brings that toughness into the post for the Tomcats, and is a big reason the Tomcats haven’t dropped off after graduating three starters from last year’s team.

Along the way, Caldwell said Downs has also become quite the basketball player.

“After we got done playing Peebles on Wednesday, we had practice on Thursday,” Caldwell said “I brought him over and said, ‘Bryce, you are becoming a very, very good basketball player.’ There wasn’t a ‘thank you.’ There wasn’t anything like that. What did he say? How many rebounds did I have?”

Downs had 18 points on 7 of 14 shooting against Fairfield, adding 12 rebounds.

“He’s becoming a heck of a basketball player,” Caldwell said.

“We had some players step up big,” Guffey said. “When William hit that 3 at the beginning of the game, that was huge for the whole team. Then we just went off that. We said we don’t want to lose this game. We want to keep on going, so we did that.”

The Tomcats were able to overcome the exploits of Fairfield junior Reese Teeters. He scored a game-high 25 points on 9 of 17 shooting to keep the Lions in the game.

The Tomcats held the rest of Fairfield’s lineup to single digits, and just 21 points on 7 of 19 shooting in the second half.

The Tomcats trailed 19-14 early in the second quarter before turning the tide in their favor.

Guffey assisted on Downs’ shot in the paint that gave the Tomcats a 25-23 lead, an advantage they never lost the rest of the way.

Trimble pushed ahead 35-27 in the third after Weber’s three-point play after a steal and drive.

Teeters answered with a 3-pointer and his own three-point play. Fairifield trailed just 40-36 after the third thanks to Brayden Zimmerman’s 3-pointer, and were within 40-38 early in the fourth after Teeter’s baseline jumper.

Trimble locked the Lions down from there. Guffey’s putback extended its lead to 44-38 with 6:43 to play.

Wisor found Guffey at the basket, then Guffey found Downs for another layup and a 48-39 lead with 4:24 to play.

When the game was on the line, Trimble made the plays it needed to make sure more championship hardware made its way back to Glouster.

The Tomcats cut the nets down afterwards, and did eventually bask in the glow of their latest district championship trophy. They even surprised Caldwell by dumping cups of water on the veteran coach when he came back into the locker room.

“To say I was shocked, that would be an understatement,” Caldwell said, still dripping wet afterwards from the surprise. “I’m very close with this group.”

Next up is a matchup against Berlin Hiland, champions from the East District.

Hiland was a 48-43 winner over Malvern on Friday, and has been to 11 state tournaments, winning three state titles.

“Berlin Hiland’s a regional and a state name,” Caldwell said. “When you mention Berlin Hiland, everybody’s heard that name. And we told the players after the game, that what we want to do. We want Glouster Trimble to be a state-recognized name also. We probably are in football, but right now we aren’t in basketball.”

The regional semifinal game will be held Tuesday at 5:30 p.m. at Southeastern High School.

The Tomcats have found plenty of tournament success in recent years, winning eight sectional titles in a row and now four district titles.

However, Trimble hasn’t won a regional tournament game during that time period. It’s a statistic that Caldwell is certainly aware of.