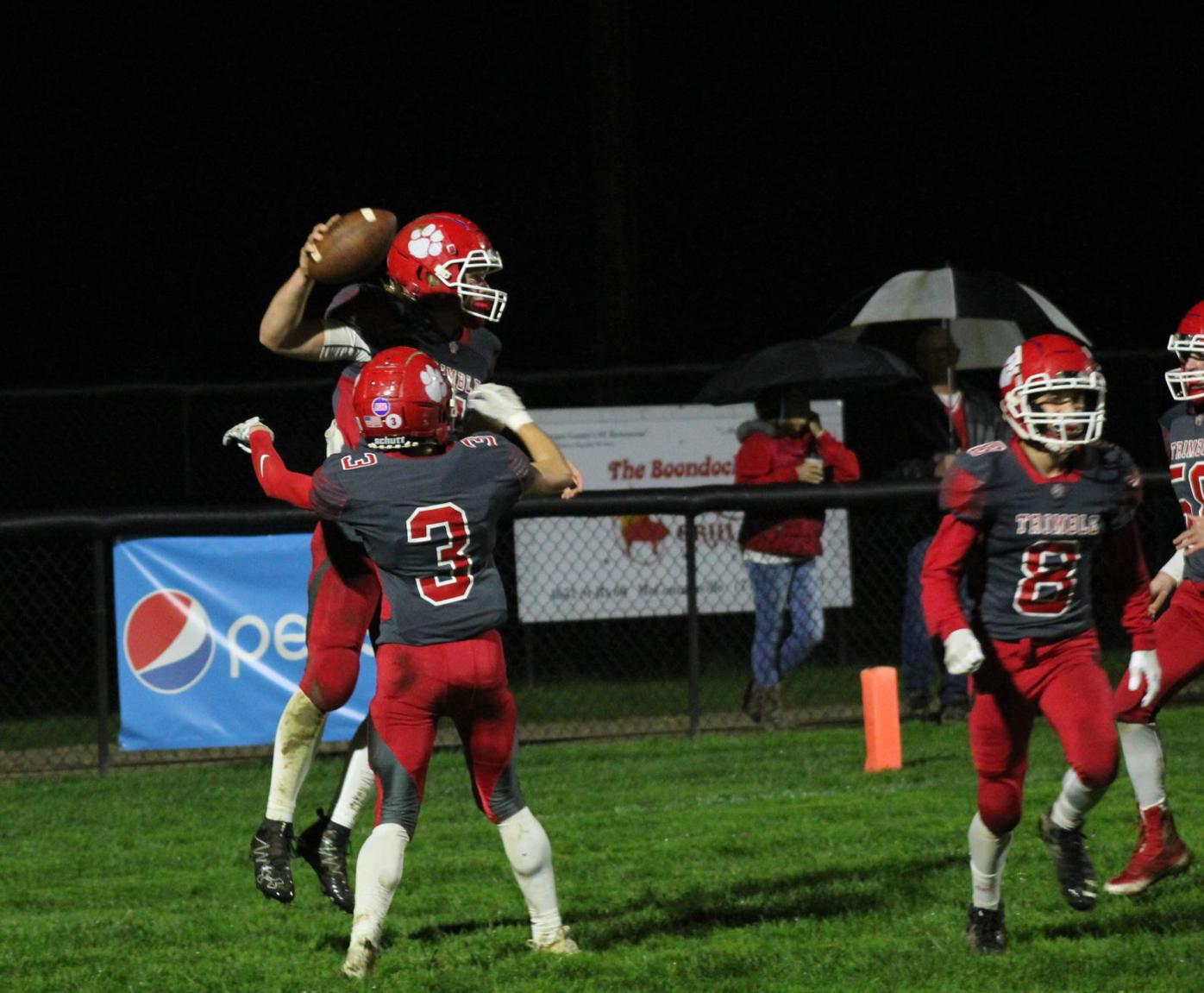 Trimble’s Tabor Lackey celebrates a touchdown with Will Freeborn (3) and Austin Wisor (8) on Saturday. Lackey accounted for four touchdowns in Trimble’s 38-0 win over Fisher Catholic. 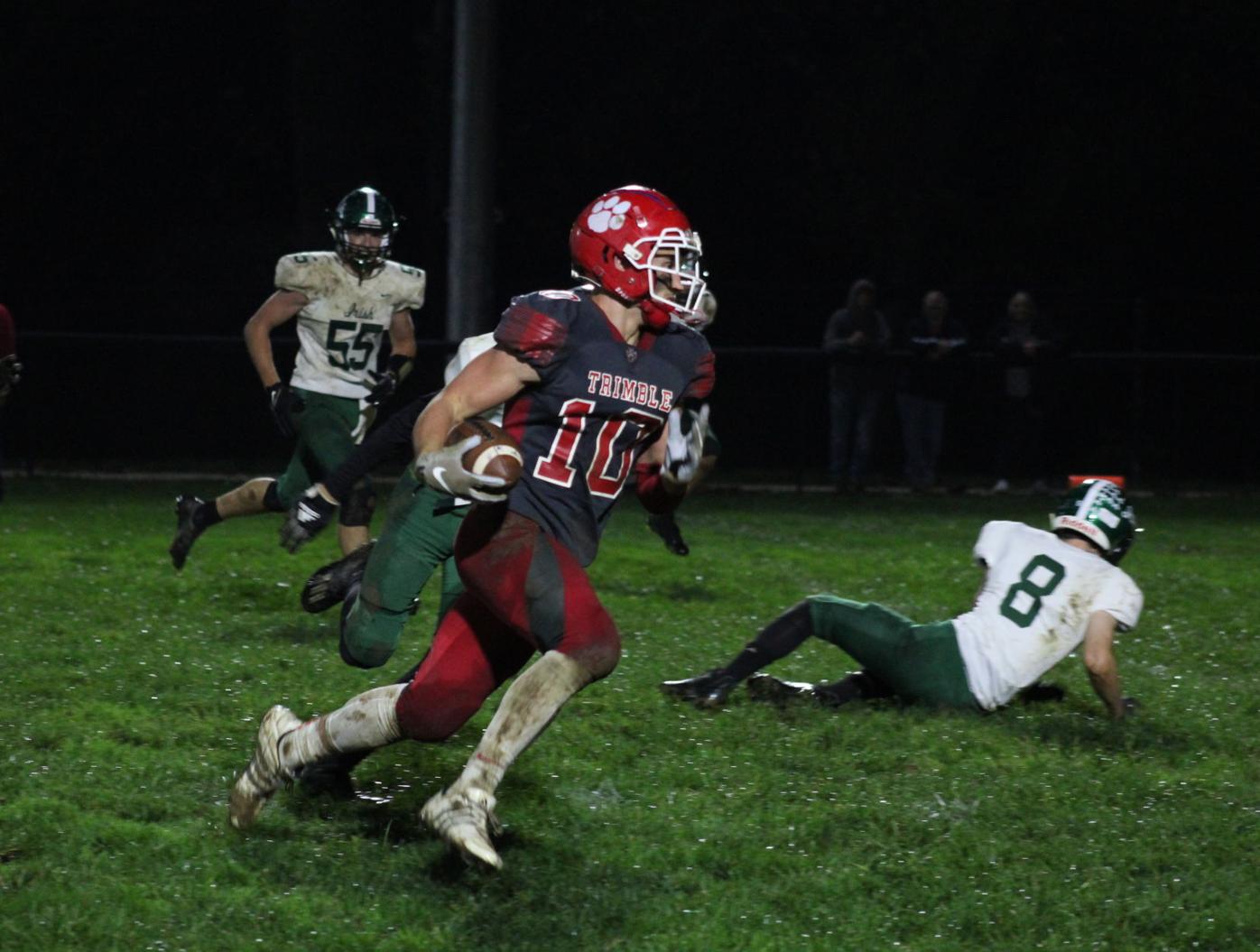 Trimble’s Blake Guffey runs up field for a 31-yard touchdown reception on Saturday. Guffey had two touchdowns in a 38-0 win over Fisher Catholic. 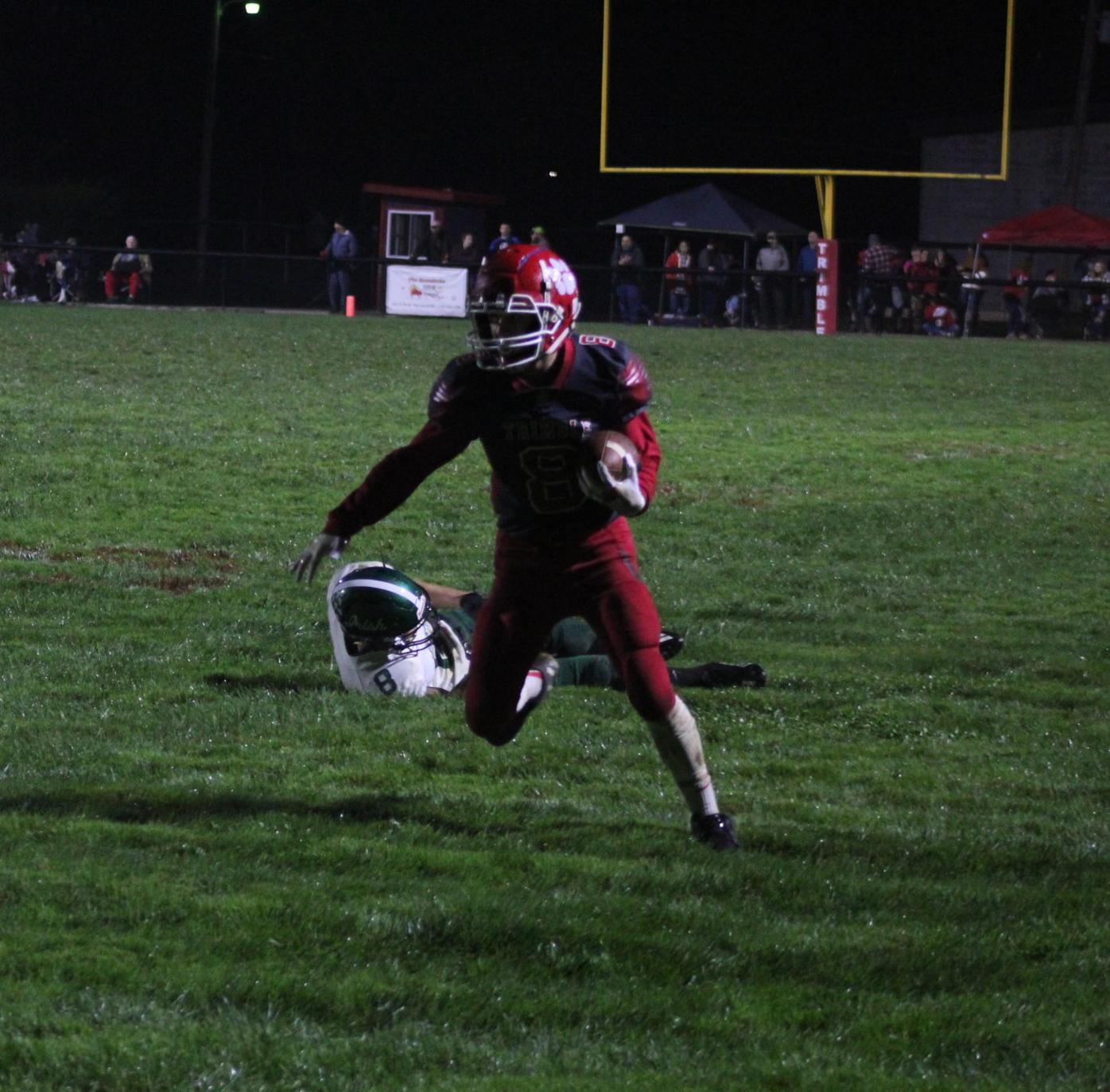 Trimble’s Austin Wisor heads toward the end zone on a 12-yard reception on Saturday. Wisor had 104 yards receiving and two scores in a 38-0 playoff win over Fisher Catholic.

Trimble’s Tabor Lackey celebrates a touchdown with Will Freeborn (3) and Austin Wisor (8) on Saturday. Lackey accounted for four touchdowns in Trimble’s 38-0 win over Fisher Catholic.

Trimble’s Blake Guffey runs up field for a 31-yard touchdown reception on Saturday. Guffey had two touchdowns in a 38-0 win over Fisher Catholic.

Trimble’s Austin Wisor heads toward the end zone on a 12-yard reception on Saturday. Wisor had 104 yards receiving and two scores in a 38-0 playoff win over Fisher Catholic.

GLOUSTER — The Trimble Tomcats walked toward the field at Glouster Memorial Stadium before Saturday’s playoff opener, Johnny Cash blaring on the loudspeaker and fireworks going off in the sky.

No. 5 Trimble opened up the Division VII, Region 27 postseason with a shutout 38-0 victory over No. 12 Fisher Catholic.

The Tomcats have won at least one playoff game in 10 consecutive seasons, a feat that even caught veteran head coach Phil Faires off guard.

“It’s amazing really, to get that,” Faires said. “I don’t even know that, really. Ten years in a row? It’s just the kids coming through, they expect it.”

The Tomcats have been a gold standard in southeastern Ohio over the last decade. They have 19 playoff victories since the 2012 season, including going 10-1 in postseason games at Glouster Memorial Stadium.

“The coaches do a great job,” said Faires, who has 21 playoff victories overall with the Tomcats. “I’ve got a great staff and they keep the kids on their toes, make sure we have good practices. That’s all part of it. The attitude of these kids, they expect to win.”

Fisher Catholic (5-6) lost in a playoff game at Glouster for the second time in the last four seasons, as it was also shut out in 2018.

The Tomcats (8-2) dominated both sides of the ball against the Irish.

On the other side of the ball, the Tomcats piled up 425 yards of offense, including 237 through the air.

“I think offensively, we did about what we wanted to,” Faires said. “We threw the ball, ran the ball when we wanted. We worked on some things.”

Trimble’s most experienced seniors were at the center of the action against the Irish.

Quarterback Tabor Lackey accounted for four total touchdowns. He completed 10 of 14 passes for 206 yards and three scores, while rushing for 48 yards and another score.

All four were involved in stopping Fisher Catholic’s offense. Guffey, Downs and Lackey all chipped in numerous tackles while Wisor also had an interception.

The passing success was a welcome sight for the Tomcats. Their last three games were played in heavy rain and two of the games only saw two full quarters of action. It didn’t leave much of a chance to throw the ball around.

“I’ve said before this is the best pass receiving group I’ve had since I’ve been here, counting all five receivers,” Faires said. “It’s just hard to keep them all happy. But we’ve been having good practices and as long as we keep that up, we’ll get there.”

However, it was a pair of runs that set the tone for the night.

Downs opened the scoring with a 31-yard touchdown through the Irish defense. With rain falling, Lackey added a 27-yard touchdown run that allowed Trimble to lead 14-0 just seven minutes into the game.

The Tomcats had 188 yards on 28 rushing attempts.

“That’s really our strength,” Faires said. “Luckily this year we do have a good passing attack too, but I still think running’s our strength. Our offensive line did a good job getting holes.”

Fisher Catholic was content to continue to try and establish a running game, even with the early deficit. The Tomcats were able to bottle up 6-foot, 210-pound senior Jack Tencza.

Tencza carried the ball 25 times but gained just 36 yards. The Tomcats never let him gain more than four yards on a single carry, and 10 of his carries went for one yard or fewer.

“They’re both hard runners,” Faires said of Tencza and Wright. “But we picked up a couple keys that helped us. We knew where they were going to run and it. That helped through the game.”

On the very next play, Lackey found Wisor wide open up the left seam for a 73-yard touchdown.

Junior kicker Ji Viau attempted a 45-yard fiel goal on fourth-and-18, and was just short on the attempt.

It proved to be Fisher Catholic’s best chance to get points on the board. The Irish never advanced the ball further than the Trimble 44-yard line the rest of the night.

The Tomcats drove 72 yards in eight plays after the missed field goal, leading 26-0 after Lackey’s 25-yard touchdown pass to an open Guffey up the right hashmark on third-and-11.

Guffey’s next touchdown came in the third quarter. The Tomcats were in the wishbone, with Lackey in the backfield and Brandon Burdette at quarterback.

On second-and-11, the Tomcats called for a pass play and Guffey found himself open again.

Burdette delivered the pass, and Guffey did the rest, scoring from 31 yards out for a 32-0 lead with 5:07 left in the third quarter.

Wisor’s 12-yard touchdown pass from Lackey closed out the scoring with 9:59 left, giving the Tomcats a 38-0 advantage.

The Tomcats did have a successful 2-point conversion after their second touchdown when Lackey found Wisor open in the end zone.

“That’s the one thing we’ve got to just keep working on,” Faires said.

The Tomcats now prepare for No. 4 East Knox, a 41-13 winner over No. 13 Reedsville Eastern on Saturday.

Trimble will make the trip north to Knox County. The Bulldogs are 9-2 including a perfect 6-0 at home.

East Knox was led by quarterback Peyton Lester in the win over the Eagles. He had 124 yards passing and a pair of touchdowns. Cole DeLaughder had 106 yards rushing.

It will be another opportunity for Trimble to add to its playoff resume. The Tomcats also won a true playoff road game at Lucas in 2017.

“They have a good offensive group,” Faires said of East Knox. “I think they match up with us with their athletes on the field. They like to throw the ball. Their quarterback will run. He keeps the play alive. We’re going to have to keep him inside the best we can.”