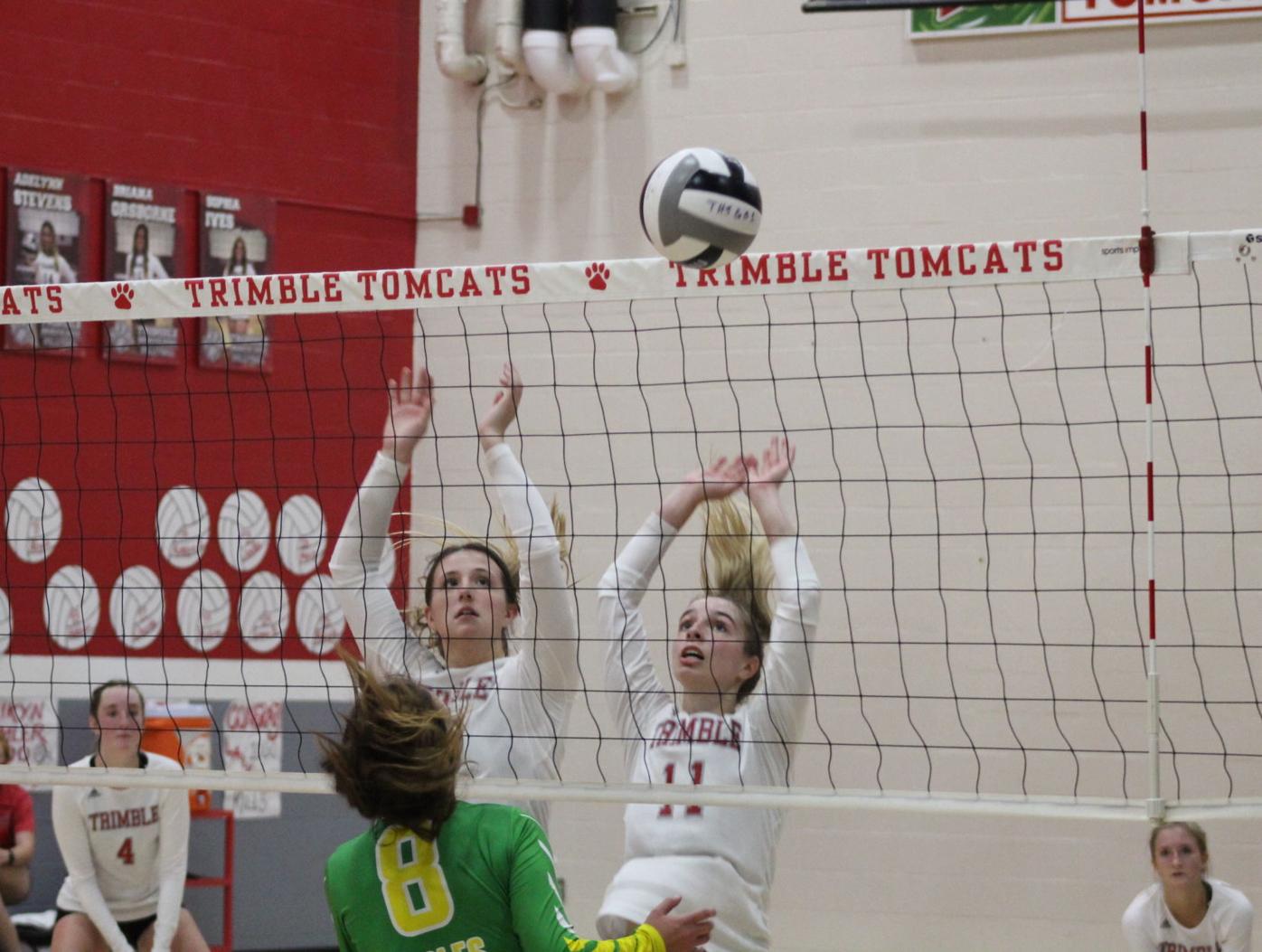 Trimble’s Briana Orsborne (left) and Riley Campbell (right) go up for a block against Eastern’s Bella Mugrage during Tuesday’s Tri-Valley Conference Hocking Division match. The Tomcats won, 3-0, to improve to 4-0 in the TVC-Hocking. 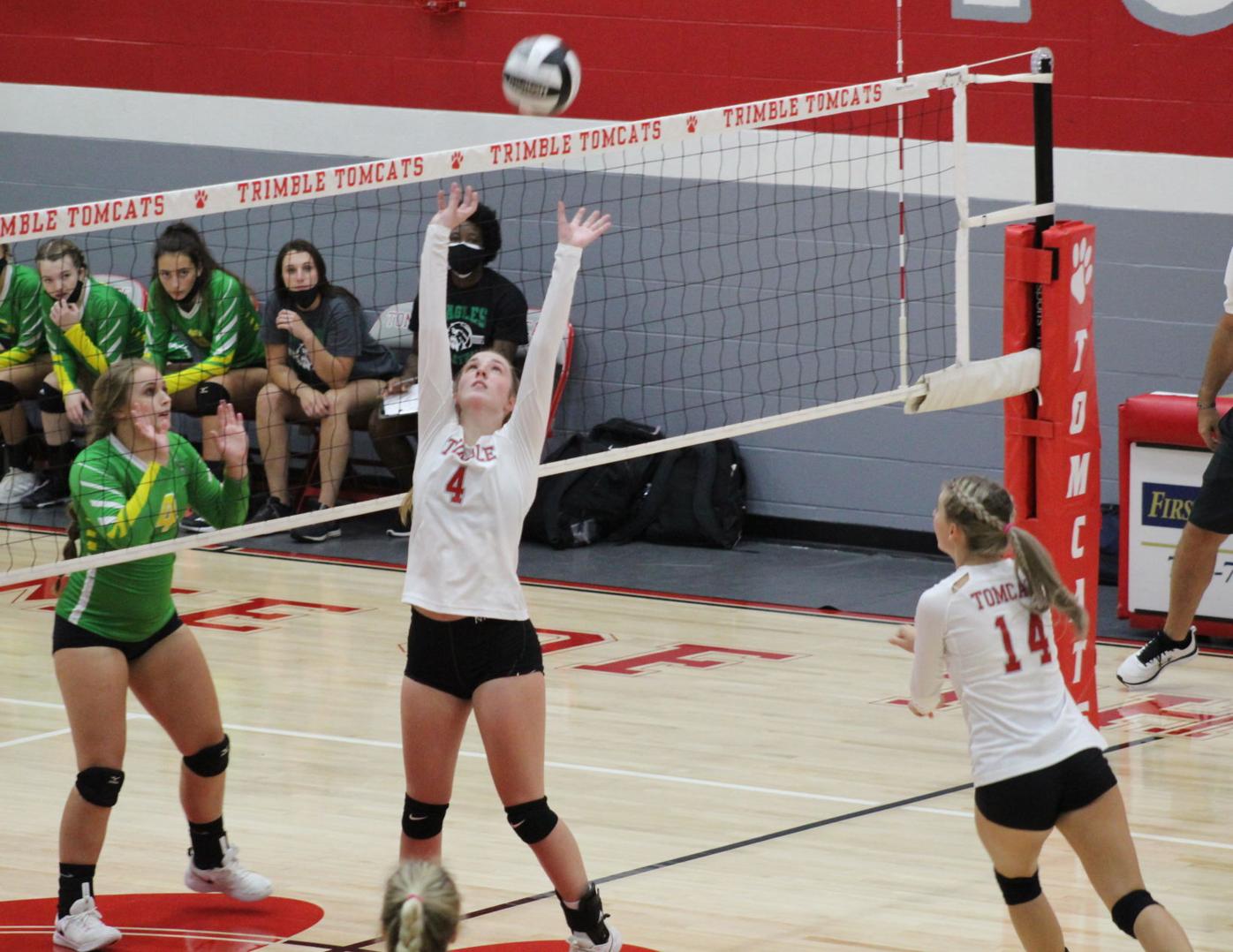 Trimble’s Jacie Orsborne (4) sets up Adelynn Stevens (14) as Eastern’s Megan Maxon (4) defends on Tuesday. Orsborne had 35 assists in Trimble’s 3-0 win over the Eagles.

Trimble’s Briana Orsborne (left) and Riley Campbell (right) go up for a block against Eastern’s Bella Mugrage during Tuesday’s Tri-Valley Conference Hocking Division match. The Tomcats won, 3-0, to improve to 4-0 in the TVC-Hocking.

Trimble’s Jacie Orsborne (4) sets up Adelynn Stevens (14) as Eastern’s Megan Maxon (4) defends on Tuesday. Orsborne had 35 assists in Trimble’s 3-0 win over the Eagles.

Trimble was a 3-0 winner over the Eastern Eagles on Tuesday inside William White Gymnasium, taking comfortable victories of 25-15, 25-16 and 25-18.

Lackey felt like there were parts of the game the Tomcats could be better at, however. Trimble was coming off its first loss of the season, a four-set setback on Saturday at Fort Frye.

“Just working on serves and trying to get a little more aggressive when we’re calling our plays, so our setter can hear,” were a few things Lackey rattled off for the Tomcats to continue working on.

Trimble improved to 7-1 overall, and 4-0 in the TVC-Hocking.

It was Eastern’s first loss in league play, falling to 3-1.

The Eagles and Tomcats were among the top teams in the league a year ago, with Trimble winning the TVC-Hocking title on the final regular season match against Eastern.

Trimble was able to strike in the first meeting, becoming the final TVC-Hocking team without a league defeat in the early portion of the schedule.

Each set took on a familiar theme. The Eagles would compete and stay close with Trimble early on, but the Tomcats’ power eventually won out.

“I think it’s just knowing the (Eastern) players and knowing what they’re going to do before they do it, is how we stay ahead of them,” Lackey said.

Trimble’s senior duo of Laikyn Imler and Riley Campbell were clutch in the win.

Imler once again led the way in kills, collecting 15 of them to go with four aces.

Lackey said their styles of play are very different, but they are the perfect duo to complement the other.

“Without Riley, Laikyn don’t get to do what Laikyn does,” Lackey said. “So those two, they’re not even comparable players in terms of style of play, but yet they’re so complementary of each other. They have a very neat relationship that way. It’s really cool when Laikyn moves to the front row, Riley says, ‘I got this.’”

Trimble had other contributors as well. Adelynn Stevens had six aces and four kills. Briana Orsborne and Faith Handley each had three kills, with Handley adding two aces. Jacie Orsborne finished with 35 assists.

Eastern was within 10-8 after Megan Maxon’s kill in the first set before Trimble really settled in. Handley served during a run of seven straight points, Trimble eventually going ahead 19-9 in the 25-15 win.

The Eagles had an early 3-1 lead in the second set, but eventually fell behind 18-11 after three consecutive Imler kills. Campbell had the final kill in the 25-16 win.

The third set was the most competitive, with Eastern going ahead 18-17 after a Trimble attack error.

The Eagles appeared to be building momentum, but a comeback wasn’t in the cards.

Imler recorded a kill to tie the score at 18-18, then the senior went back to the service line.

Imler served out the remaining points, the Tomcats scoring the final eight points of the set to complete the sweep, 25-18.

Imler had two aces during the run, with Campbell and Handley each adding a kill.

“Laikyn knows how to look at the court and know where to put the ball when she serves,” Lackey said. “So usually when she goes back to serve, I never worry about her being able to create points or put us in a position where we can set the block up off of where the serve is going to go.”

Eastern was led by Sydney Reynolds’ 10 kills, with Maxon and Emma Edwards each collecting five kills.

The Tomcats are the defending outright TVC-Hocking champions, and are the early leaders for another title in 2021.

While winning the league again is certainly a goal, Lackey knows the Tomcats will have to continue to improve on certain areas of the game as the season progresses.

“We’ll have that very candid conversation,” she said. “You have to confront the brutal fact conversations and we’ll do that. The other piece to that is we have all this COVID stuff going on. They have to adjust to that too.”

The Tomcats are scheduled to travel to River Valley on Wednesday before hosting Berne Union on Monday.