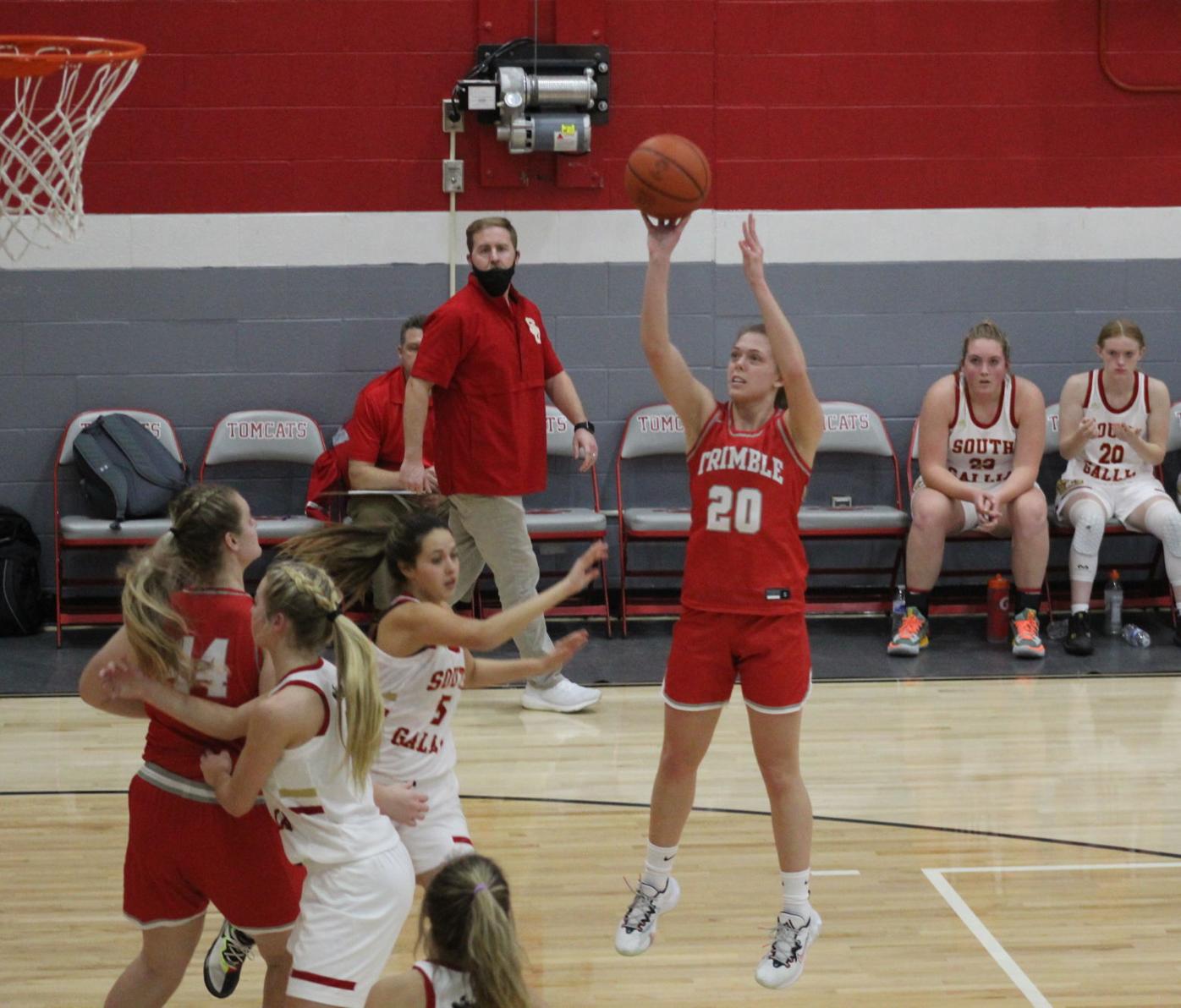 Trimble senior Emily Young (20) puts up a shot during a game against South Gallia on Jan. 4. The Tomcats are 11-0 overall, and 7-0 in the Tri-Valley Conference Hocking Division. 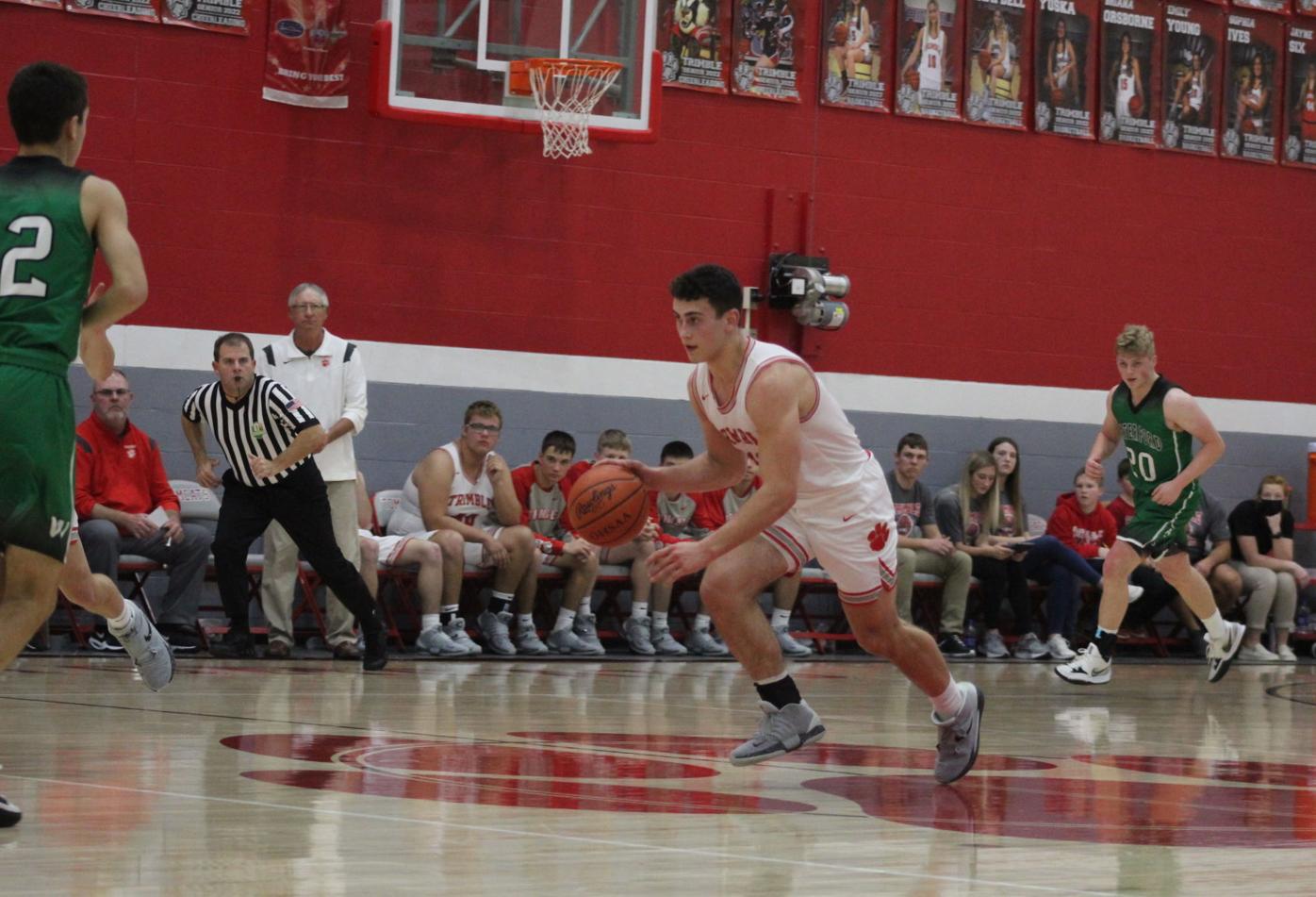 Trimble’s Blake Guffey pushes the basketball up the court during a game against Waterford on Dec. 14. The Tomcats are 10-0 overall and 5-0 in the Tri-Valley Conference Hocking Division.

Trimble senior Emily Young (20) puts up a shot during a game against South Gallia on Jan. 4. The Tomcats are 11-0 overall, and 7-0 in the Tri-Valley Conference Hocking Division.

Trimble’s Blake Guffey pushes the basketball up the court during a game against Waterford on Dec. 14. The Tomcats are 10-0 overall and 5-0 in the Tri-Valley Conference Hocking Division.

TRIMBLE — All the Trimble Tomcats do is win, and the rest of the state is taking notice.

The Tomcats’ boys and girls basketball teams are enjoying perfect starts through the first half of the season.

Both teams are ranked No. 3 in the latest Division IV Associated Press poll.

The Trimble girls are currently 11-0 after a 57-47 win over Belpre on Tuesday.

The boys are 10-0, and awaiting a key league contest at home on Friday against Federal Hocking.

Each squad is led by a strong and experienced senior class. The girls’ squad, coached by Joe Richards, has been building toward this season for essentially the previous four seasons.

Seniors Briana Orsborne, Jayne Six, Emily Young, Laikyn Imler and Riley Campbell are the leaders of a group that started when they were freshmen.

Take it back a season earlier, when the group was in eighth grade, Trimble was forced to cancel the rest of its season due to low numbers after injuries took a toll.

Richards and his brother, assistant coach Jason Richards, turned their focus to the group of eighth graders for the rest of that season.

They haven’t disappointed. They went 9-14 as freshmen, playing against mostly older competition.

The Tomcats surged ahead to Tri-Valley Conference Hocking Division champions as sophomores, before sharing the league title with Waterford last season.

Six already scored her 1,000th career point earlier this season. The Tomcats have advanced to the district title game the last two seasons before losing to Peebles.

Trimble has thrived against a difficult schedule so far, as it is also 7-0 in the TVC-Hocking. The Tomcats won at Waterford in the first matchup between the two rivals, but also owns non-league wins against Alexander, Chillicothe, Notre Dame and Nelsonville-York.

Trimble is scheduled to face Portsmouth West on Saturday at 5:15 p.m. as part of the Tri-State Hoops Throw Down at Fairland High School. The Tomcats will also host South Webster, another strong Division IV team, on Jan. 22 at 2:30 p.m.

Trimble has key games at Berne Union, which is ranked No. 5 in Division IV, on Jan. 26, a home rematch against Nelsonville-York on Jan. 29 and the second meeting against Waterford on Jan. 31. The Tomcats are also at Vinton County on Feb. 14.

Joe Richards said the non-league schedule is designed to best help Trimble advance in the postseason.

“We’ve talked about our non-league schedule, it’s pretty tough and our league is tough,” Richards said. “We don’t have an easy game left. We know if we’re not ready to play, we don’t want to put that first ‘L’ in the column if we don’t have to. We’re going to keep playing.”

The Trimble boys are also 5-0 in the TVC-Hocking, and have dealt with a down period due to postponements.

Inclement weather pushed last Saturday’s game at Chesapeake back to this Monday.

Federal Hocking also announced on Wednesday that it is pausing extracurricular activities until Tuesday. That means the Lancers’ trip to Trimble on Friday is postponed until a later date.

Federal Hocking is 9-3 and also 5-0 in league play. The Lancers won the league title two years ago by beating Trimble, but the Tomcats have won 21 TVC-Hocking games in a row ever since.

Like the girls, the boys are led by a strong senior class. Blakey Guffey, a four-year starter and two-time all-Ohioan, leads the way.

Guffey surpassed the 1,000-point career scoring mark nearly a year ago during his junior season. He’s helped lead Trimble to Southeast District titles in Division IV each of the last two seasons.

The Tomcats have been a machine so far, winning every game by double figures. Six of their wins have been by at least 20 points, as their average margin of victory is 24 points per game.

Veteran coach Howie Caldwell, with more than 500 career wins, has the Tomcats in position for another potential tournament run.

Caldwell said he has the score from last year’s 57-50 regional tournament loss to Hiland posted on the locker room for motivation.

“Every time that these guys come out on the floor and they leave the locker room, they’ve got to see that,” Caldwell said. “That’s our motivation for the year. We want to make sure — and it’s not going to be easy because there are some tremendous teams this year — it’s not going to be easy, but we’re going to work hard to get back to where we were last year.”

The Tomcats will also face a test with a trip to a Division III school in Chesapeake on Monday, their first game in 13 days. Trimble also hosts TVC-Ohio schools Alexander and Athens later in the season, sandwiched around a trip to Federal Hocking on Feb. 11.

Both teams at Trimble are trying to do something special this season. Pickerington Central, Kettering Alter, Tri-Valley, Toledo Central Catholic, Ottawa-Glandorf and Tri-Village are the only other schools that have both their boys and girls teams ranked inside the top 10. The Tomcats are the only Southeast District school to accomplish the feat at the moment.

How long both teams remain unbeaten remains to be seen, but both Tomcat squads are certainly giving Glouster and the rest of Athens County something to be excited about in 2022.