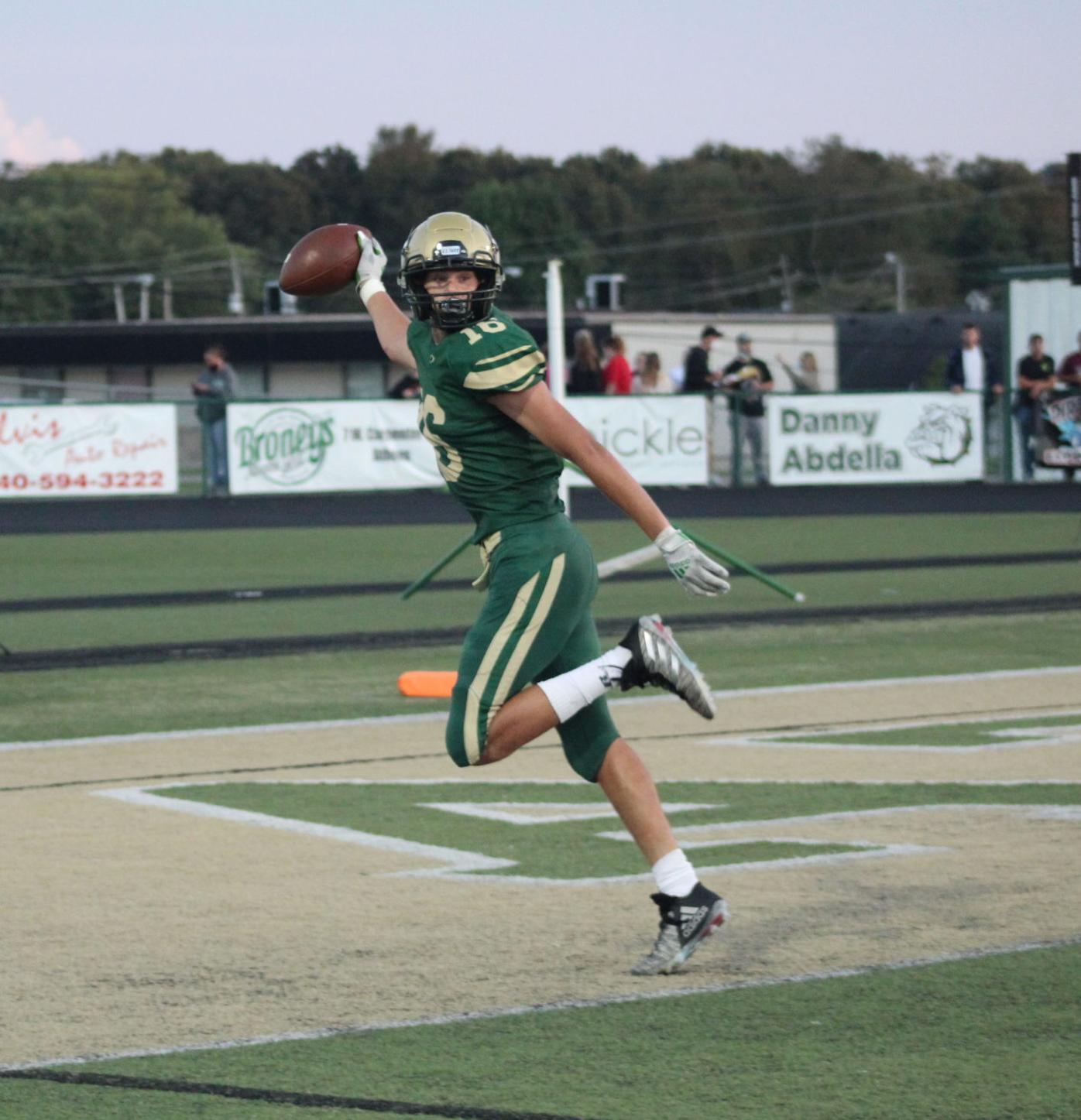 Athens senior Braxton Springer crosses the goal line after catching a 34-yard touchdown pass on Friday against Alexander. The Bulldogs got their first win of the season, 41-14 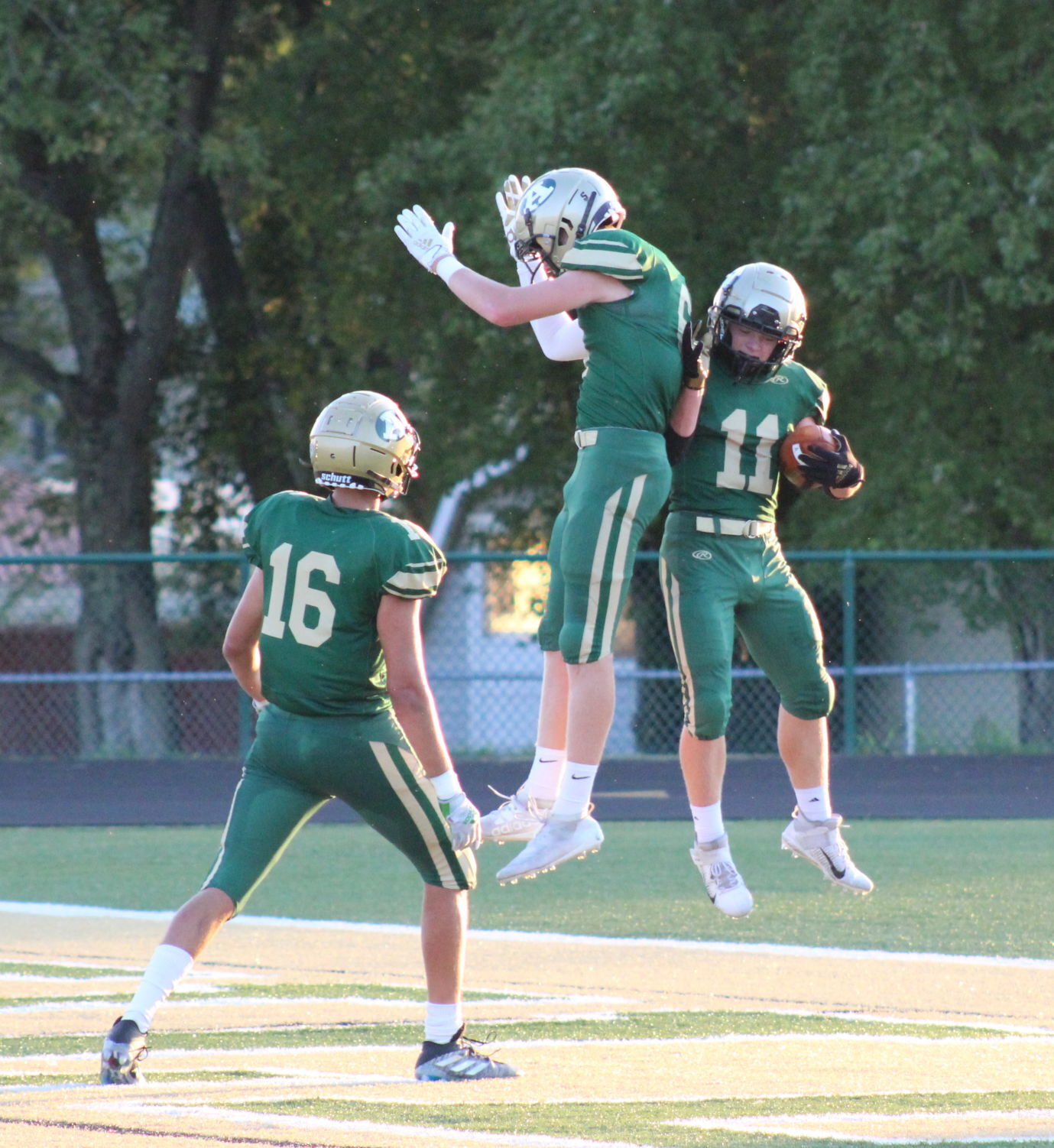 Athens senior Braxton Springer crosses the goal line after catching a 34-yard touchdown pass on Friday against Alexander. The Bulldogs got their first win of the season, 41-14

Athens junior Landon Wheatley has proven through two games that he makes a world of difference for the Athens Bulldogs.

Wheatley threw three touchdowns, all in the first half, leading Athens to a 41-14 win over the Alexander Spartans on Friday at Joe Burrow Field.

It was Wheatley’s second game of the season, and first at home. Athens was shut out the first two games without their quarterback, but have now scored 69 points in the last two weeks.

It all led to the Bulldogs’ first win of the season.

“Our quarterback is always a guy the we count on to make good decisions and make big plays for us and this year’s no different,” Athens coach Nathan White said.

Wheatley completed 12 of 15 passes for 217 yards, three touchdowns and an interception in the victory. He added 46 yards on the ground.

When the Bulldogs (1-3, 1-0 Tri-Valley Conference Ohio Division) needed a big play in the passing game, Wheatley delivered against the Spartans.

“It’s noticeable tonight to have two straight weeks of actually practicing what we do offensively,” White said. “The execution tonight was much better.”

Wheatley spread his touchdowns around to three different receivers.

Alex Pero caught the first toss, a 24-yard ball down the visiting sideline for a 7-0 lead.

The second touchdown went to another player that missed time earlier in the season, junior Levi Neal.

Wheatley hit Neal for a 25-yard touchdown strike, giving Athens a 14-0 lead with 2:09 left in the opening quarter.

Wheatley had the hat trick of touchdown passes when he spotted senior Braxton Springer open up the sideline in the second quarter. The 34-yard touchdown pass gave Athens a 21-0 edge.

“It’s great,” White said. “The biggest thing calling plays is you have guys you can trust to throw the ball to. We have a lot of those guys that know what they’re doing and run good routes.”

The performance ended a two-game winning streak for Alexander (2-2, 0-1 TVC-Ohio). Coach Danny Koska said the Spartans felt like they had a good read on what Athens was doing offensively.

He said the Bulldogs simply made the plays.

With Wheatley back, junior Luke Brandes could focus in on playing tailback instead of trying to play a wildcat quarterback.

The hard-running Brandes was busy once the Bulldogs had the lead. He scored touchdowns runs of 1-yard, 4-yards and 2-yards as part of a three-score night that put the game away.

The Spartans won at Belpre last week thanks to a high-flying passing attack. Sophomore Jordan Schulz threw five touchdown passes in that win, but the Bulldogs limited Alexander’s opportunities on Friday.

Schulz completed 7 of 16 passes for 119 yards, a touchdown and an interception.

His score was a 30-yard strike to Landen Althouse second quarter, and Schulz also had a 1-yard scoring run in the fourth.

“Coach (Kris) Kostival put together a great defensive plan and our kids executed it,” White said. “(Schulz) throws the ball really well. He’s a good player. I was nervous about that, but our kids responded well, covered them well and we got after the quarterback with our pass rush too.”

The Bulldogs pressured Schulz all night, holding him to negative-30 rushing yards. Alexander only had one positive net yard rushing.

“The biggest thing is we knew they were going to try and blitz us up the middle,” Koska said. “We knew what was happening and we just couldn’t stop it. I don’t know, I’ll have to go back and watch the film, but up front we could not handle them at all.”

The Spartans will try and turn the page when they host Wellston next week. Koska said it’s important to move on now that the rivalry game with Athens is in the books.

The Bulldogs were happy to have their full complement of players back, and celebrate with a TVC-Ohio victory. Athens is a young group, and Friday was just Wheatley’s third career start at quarterback.

The Bulldogs hope to continue to build off Friday’s success.

“This is a game that no matter what your record is, it’s important to win because it’s certainly a rivalry between Athens and Alexander,” White said. “All the kids know each other and talk to each other all week. Any win feels good no matter what. This one feels just as good as all the rest.”