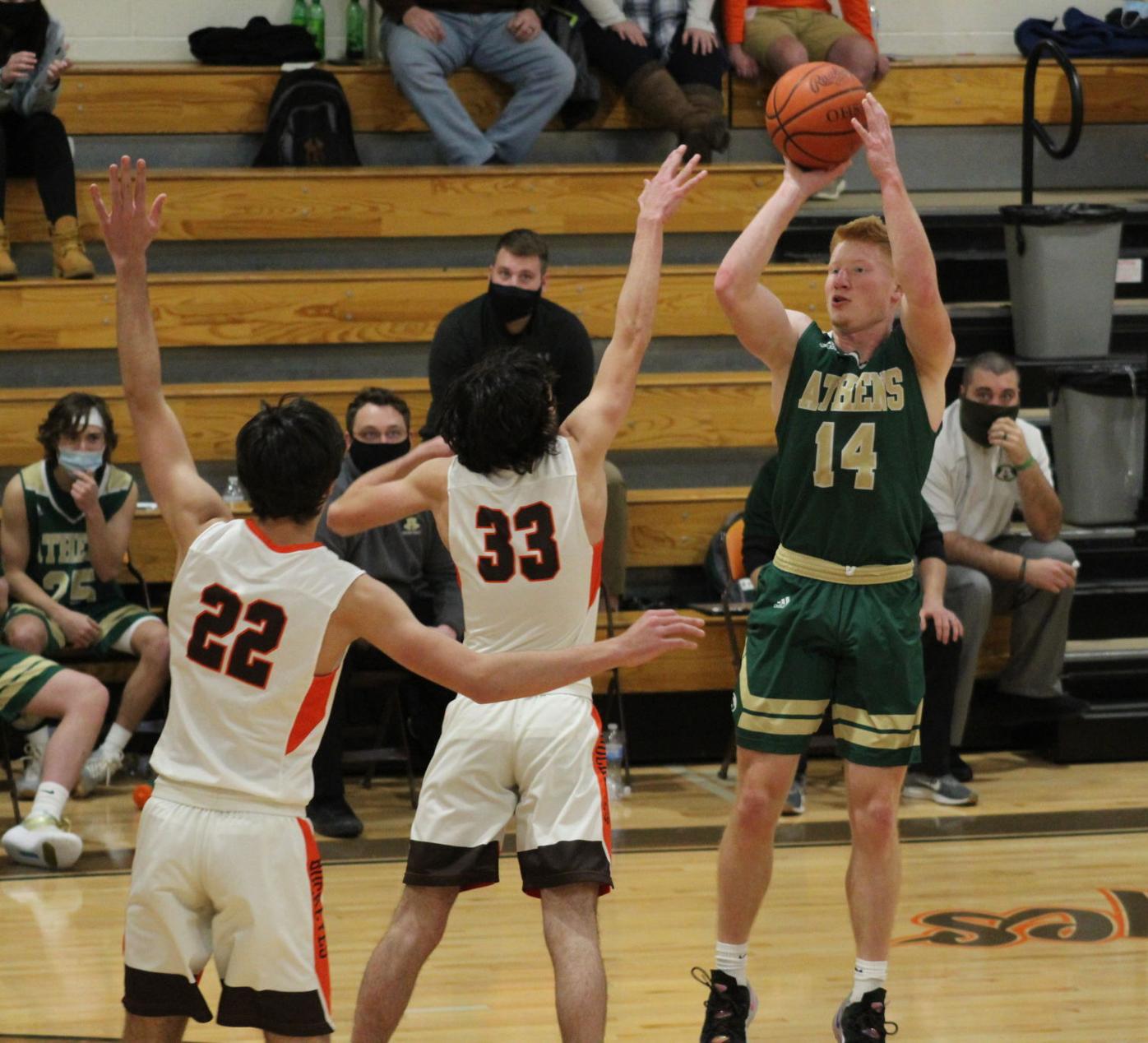 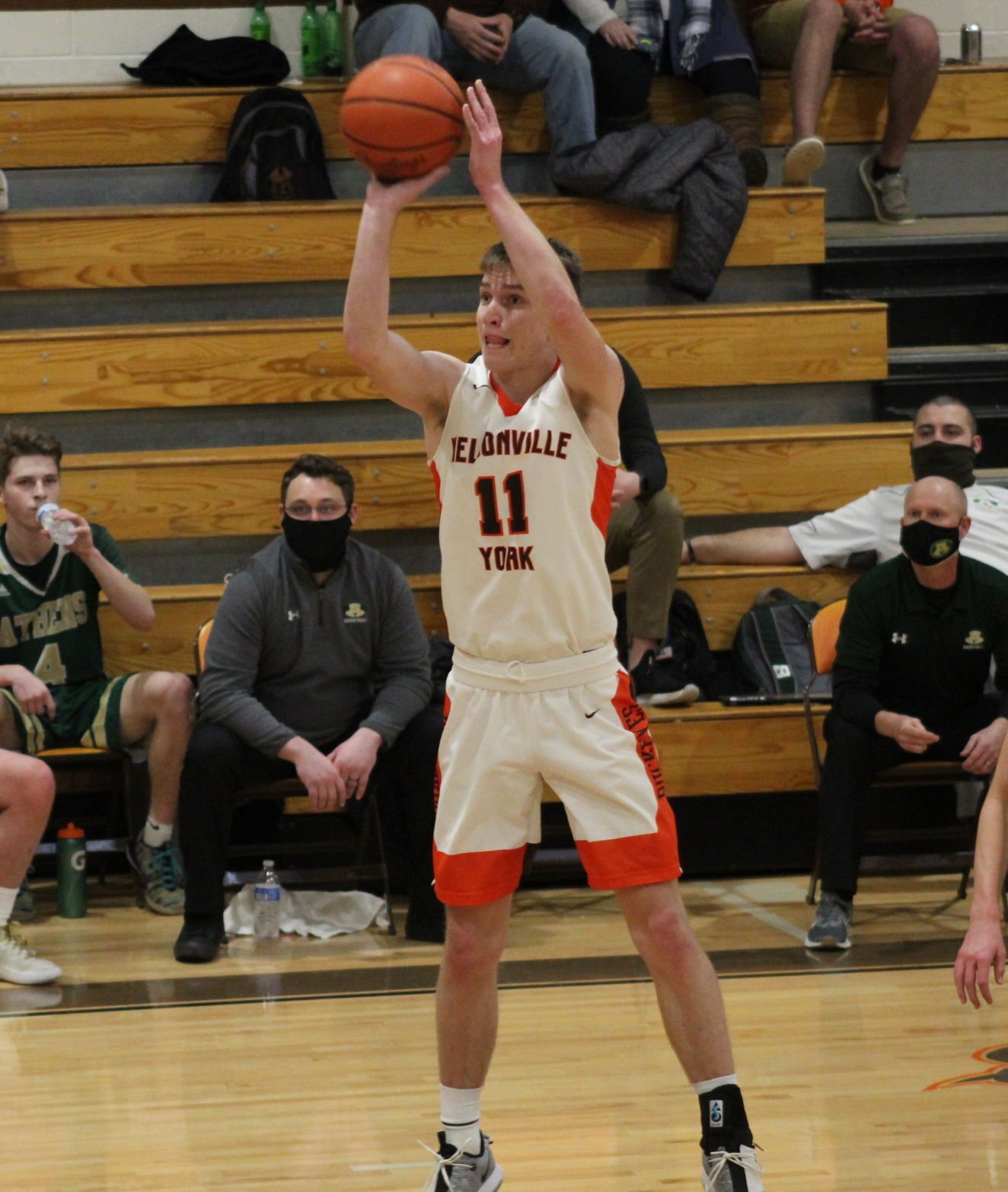 NELSONVILLE — Brayden Whiting said he realized during the third quarter that he was having a pretty good night.

“It finally hit me that I was going that well and making shots,” the Athens senior said.

By the end of the night, Whiting would enjoy one of the best nights in the storied history of the Athens basketball program.

Whiting scored a career-high 40 points, willing the Bulldogs to a 63-57 win at Nelsonville-York’s Ben Wagner Gymnasium on Friday.

Whiting scored 24 points on 11 of 16 shooting in the second half.

“I just knew the whole time that we had to keep going,” Whiting said. “Couldn’t stop, couldn’t slow down. Just keep the intensity up.”

The Buckeyes (3-16, 0-9 Tri-Valley Conference Ohio Division) pushed the Bulldogs (10-7, 8-0 TVC-Ohio) for four quarters in their upset bid, but Whiting simply proved to be too much.

“He did a tremendous job,” Nelsonville-York coach Blaine Gabriel said. “He’s a really nice young man. Had a game of the ages for himself tonight.”

The win keeps Athens unbeaten and in first place in the TVC-Ohio, ahead of second-place Vinton County (9-1 TVC).

The Buckeyes may still be looking for their first league win, but they put together undoubtedly one of their best efforts of the season.

Nelsonville-York is playing just the second game with its entire lineup intact due to injuries and COVID-19 protocols. The Buckeyes played games in January where they were missing as many as three or four starters.

“They’re pretty good,” Cozart said of the Buckeyes. “Don’t let the record fool you. They play hard. They play smart and they looked pretty dialed in tonight. I’m not making any excuses. They can play with anybody in our league with that roster out there right now.”

“I was very pleased with the way my kids came out and played,” Gabriel said. “This, tonight, was really our first opportunity to play our full team the way I wanted to play since December.”

The Bulldogs were having a hard time pulling away from the Buckeyes, as the two county rivals battled back and forth all night.

Athens went ahead 55-51 with 4:01 left after Whiting scored on a baseline drive.

Nelsonville-York answered with baskets from Swope and Gail to force a 55-55 tie with just under three minutes to play.

Whiting delivered body blows to the Buckeyes all night, but he went in for the knockout at that point.

Whiting got the ball in the left corner and again drove baseline. He finished through contact at the rim, completing a three-point play for a 58-55 advantage with 2:15 remaining.

Whiting constantly hurt the Buckeyes in the paint, either driving all the way to the rim or pulling up for a mid-range jumper.

“Not many guys can stay in front of him because he’s so strong, and now he’s finishing through all kinds of contact,” Cozart said. “His confidence level is through the roof. He’s just outstanding. In my opinion, he’s the best player around here.”

Whiting wasn’t done. The Bulldogs got the ball back, and Will Matters found Whiting in the left corner.

Up that point, Whiting had missed his first seven 3-point attempts. That didn’t stop him from putting up the long-range shot.

“If anybody else would have taken that corner 3, they probably would have been sitting beside me at that point in the game,” Cozart said. “The clock was running. They were still in that zone.”

Undeterred by the previous 3-point misses, Whiting stepped up to swish this corner 3-pointer.

“You knew it was going in,” Cozart said. “Sometimes you just sit back and let him go.”

Matters yelled in celebration at Whiting after the shot went through. He now had an even 40 points, and the Bulldogs led 61-55 with just 1:31 left.

“Coaches have always told me, just forget about the last shot,” Whiting said. “If you miss, whatever. You’ll get another shot. I just kept shooting. Finally made one.”

The Buckeyes had battled all night, but weren’t able to recover from those final six points for Whiting. They had a turnover on their next possession, and Athens eventually went ahead 63-55 after two Matters free throws with 11.6 seconds remaining.

“The 3 in the corner with a minute and a half to go was a dagger,” Gabriel said. “We were only down three. That was a big shot. He took the shot, he hit it.”

The Buckeyes now turn their attention to the Division III postseason. A No. 25 seed, they will travel to No. 8 North Adams on Monday in a sectional semifinal.

After that, they travel to Wellston on Tuesday for a makeup game and host Miller on Thursday.

The Buckeyes have lost 15 games in a row, but Gabriel said his group is determined to get the most out of the games they have left. Friday was evidence of that, as they pushed the TVC-Ohio leaders to the brink.

“I know that we’ve lost a lot of games in row, but I love these kids to death,” Gabriel said. “I wouldn’t want to be with anybody else. I’ve had teams before where you go through losing and they don’t want to come. They don’t want to practice. These guys come as if we were undefeated. I couldn’t ask for a better group. They work. They all like each other. I love them to death. I just hate for the season to end. We’re really working.”

The Bulldogs will continue to chase a TVC-Ohio title, while also preparing for the postseason.

Athens is at Vinton County on Monday in a battle for first — a game that has been postponed twice — before traveling to Unioto on Thursday for a Division II sectional final.

“They’re the most important games that we have all year,” Whiting said. “Obviously, Vinton is a good team. We have to prepare for them. We’re just in it to win the league, just keep going.”