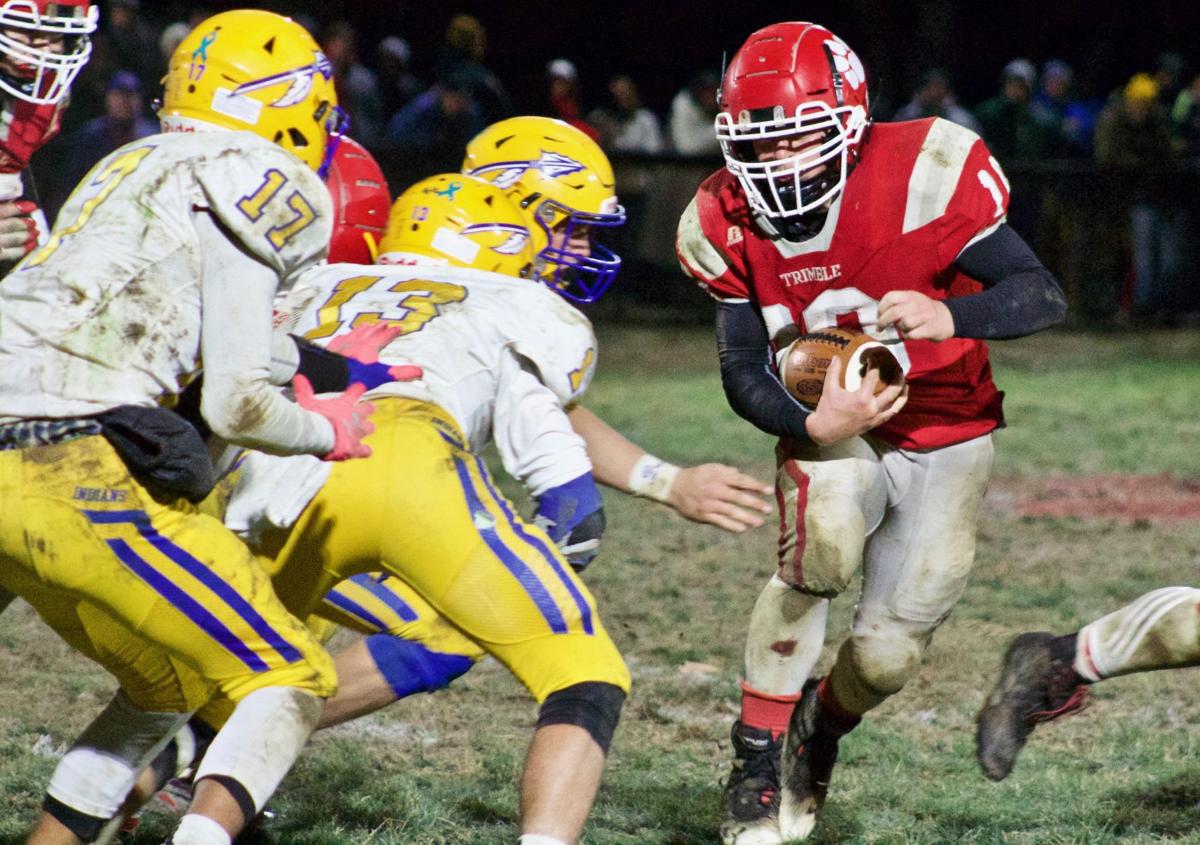 Trimble's Conner Wright runs the ball against the Southern Indians in a first-round playoff game on Nov. 8, 2019. Wright had 70 yards rushing in the 26-14 victory. The Trimble graduate will continue his football career at Marietta College. 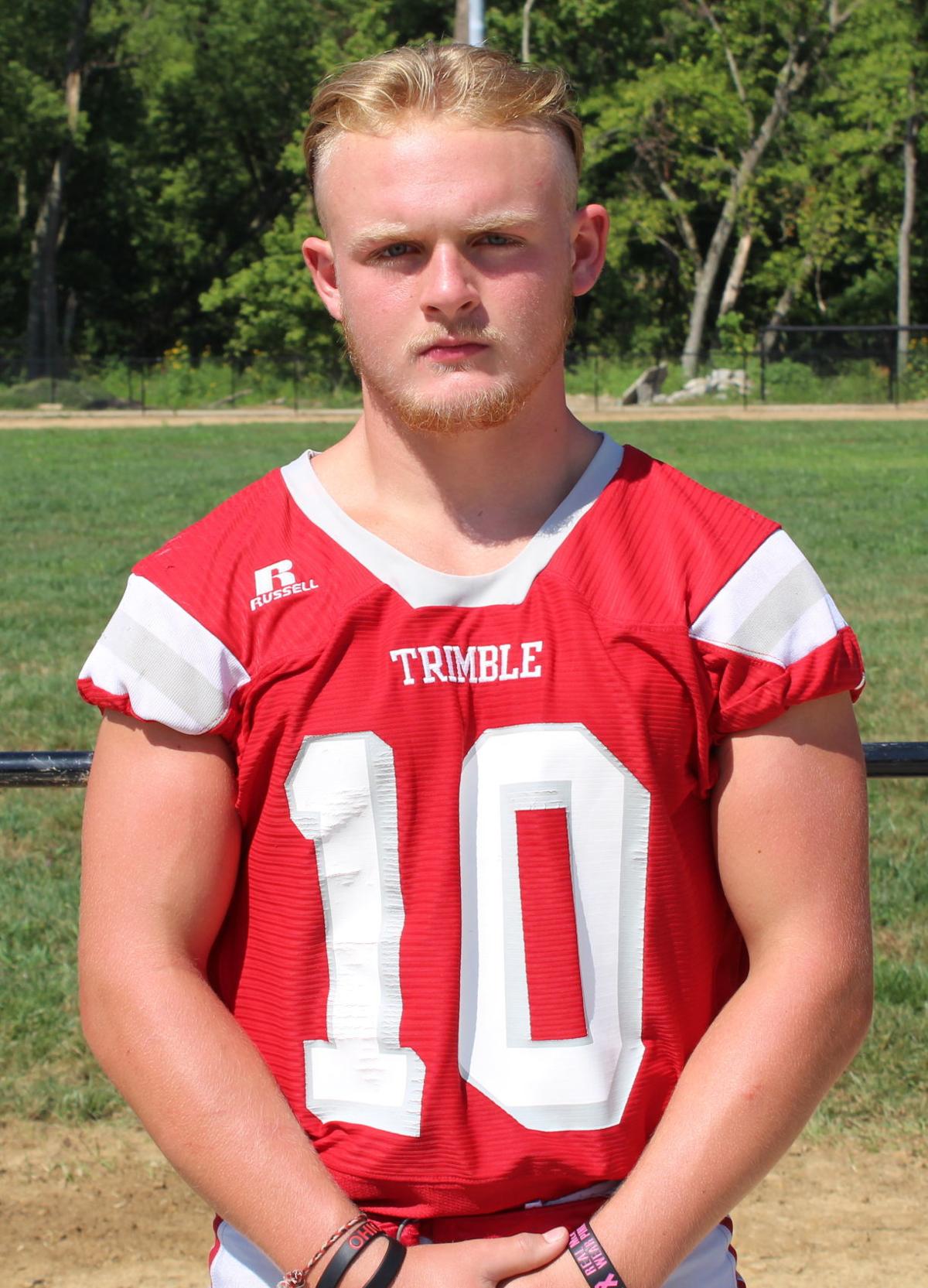 Trimble's Conner Wright runs the ball against the Southern Indians in a first-round playoff game on Nov. 8, 2019. Wright had 70 yards rushing in the 26-14 victory. The Trimble graduate will continue his football career at Marietta College.

It was halftime of a Division VI, Region 21 semifinal game for the Trimble Tomcats against Springfield. Trimble senior tailback/linebacker Conner Wright had just suffered an ankle injury that left him visibly hobbled.

There may have been some questions from spectators about whether or not Wright would be able to continue playing.

For Wright, there was no doubt. Not only did he play, he thrived, carrying the football 34 times for 157 yards and three touchdowns in what turned out to be his final high school football game.

"There is no special mindset that I had to take to ignore these injuries in the middle of the game because that is what Trimble football is all about, toughness," Wright said.

Wright will take that toughness just down the road for the next four years. The Tomcat graduate will continue his football career at Marietta College.

There is certainly no questioning Wright's 'rutter' toughness and desire to play football. He missed substantial time during basketball season while he recovered from some of the bumps and bruises accumulated during another spectacular season on the gridiron.

Wright wore a cast on his hand as basketball season began, as he broke his thumb during a week two game against Belpre. Wright also said that he dealt with a stress fracture that was the result of a hip injury.

Despite those obstacles, Wright was still the Tri-Valley Conference Hocking Division Offensive Player of the Year for the second season in a row. He was also a first-team all-Ohio selection at tailback for the second consecutive season.

Wright said he battled through the injuries not just for himself, but for his teammates and the Trimble community.

"We took these kind of things very seriously and I was happy to keep playing through these injuries for my teammates, coaches, and community," Wright said. "I was not the only one on the team playing through injury and for everything they sacrificed for us, the least we could do was suck it up for a little while."

The Tomcats have a long history of standout players, and Wright will go down in the conversation with some of the best to wear the Trimble uniform.

Wright carried the football 180 times last fall for 1,730 yards and 32 touchdowns. As a junior, he had 1,848 yards rushing and 28 more touchdowns. He was also a first-team all-Southeast District player as a sophomore, running for 920 yards and eight touchdowns.

Wright was the centerpiece of the Tomcats' wishbone rushing attack as they went 11-1 last season. When Trimble needed a big play, they usually gave the pigskin to Wright and he delivered.

Wright also scored one of the most dramatic touchdowns in Tomcat history as a junior on Trimble's run to the Division VII state championship game. He carried a pile of Lucas defenders into the end zone on a 9-yard touchdown run with just 17.6 seconds left in the Region 27 championship game, a 21-14 Tomcat win.

But even with all of the big games and memorable moments, Wright said his best memories don't involve a specific play or contest.

"My fondest memories from playing for Trimble aren’t winning games or going to the state championship," he said. "They are from the times I spent with my team in the weight room and walking out on the field with my heart thumping out of chest and the audience in our stands just as pumped as we were for every single game."

It should come as no surprise that Wright hopes to someday became a strength and conditioning coach. He got stronger every season, and he said those offseason workouts are some of his best memories.

"If I had to pick, then my fondest memory would be would be the week of max outs in summer lifting," Wright said. "Everyone hit outstanding numbers that week and the minute I stepped into the room I could feel the anticipation and readiness for the season. I remember feeling a strong sense of pride for every single person on that team that began right then."

Wright said the recruiting process with Marietta began last summer. He was familiar with the campus, as Trimble's basketball team stayed there during summer camps the last four years.

"It has always been a school where I thought to myself, 'It is definitely possible that I could end up here after high school,'" Wright said.

Andy Waddle is the Pioneers' head football coach. Wright said he became even more comfortable with his decision to attend Marietta after getting to know the coaching staff.

"I believe that the coaches and the program they are building are the things that assured me I was choosing the right place," Wright said. "I’ve talked with every single coach on the staff and they all know what they’re doing and understand football at a college level because almost all of them have played and experienced football at this level."

Marietta went 5-5 last season, including 4-5 in the Ohio Athletic Conference. They are an NCAA Division III school.

Wright said he has been on a home workout program that Marietta sent to him. A weight bench in his garage has been a 'life saver' as gyms and school facilities have been closed during the COVID-19 pandemic.

One thing is for sure, Wright will put the time in the weight room for the Pioneers, just like he did for the Tomcats.

"In order for me to maximize my ability at running back for Marietta, I must start to use agility more but keep my strength that I have used over the years," Wright said. "Unlike high school, everyone is strong at the college level."

Wright said there are plenty of people to thank for helping him have this opportunity at Marietta. Trimble assistant coach Brady Trace helped mold his workout routines.

"He brought a whole new type of energy to the football program and I accredit him to my fondness of working out and what I would like to do in life," Wright said.

The community that Wright fought through injury to play for deserves a lot of recognition too.

"They made me feel like a hero and have supported my teammates and I through everything," he said. "They are another big factor of what makes Trimble Football what it is.

"My family and my teammates lastly," Wright added. "There is not a day that goes by that I don’t think about the experiences I shared with them and how they supported me, believed in me, and made me the best Conner Wright I could possibly be on and off of the field."

The Tomcats certainly did a lot of winning on the field — going 42-9 the last four seasons — and Wright is just the latest player to get a college chance.

The Tomcats' class of 2020 helped keep alive their winning tradition, and also helped show that opportunities in football at the college level can happen too.

"I had not even thought about playing at the next level until my junior year," Wright said. "Being a small-town kid from Appalachia Ohio kind of discourages any dreams like that, but all the better to show people it is possible. I have a few friends I would consider family that are doing the same."