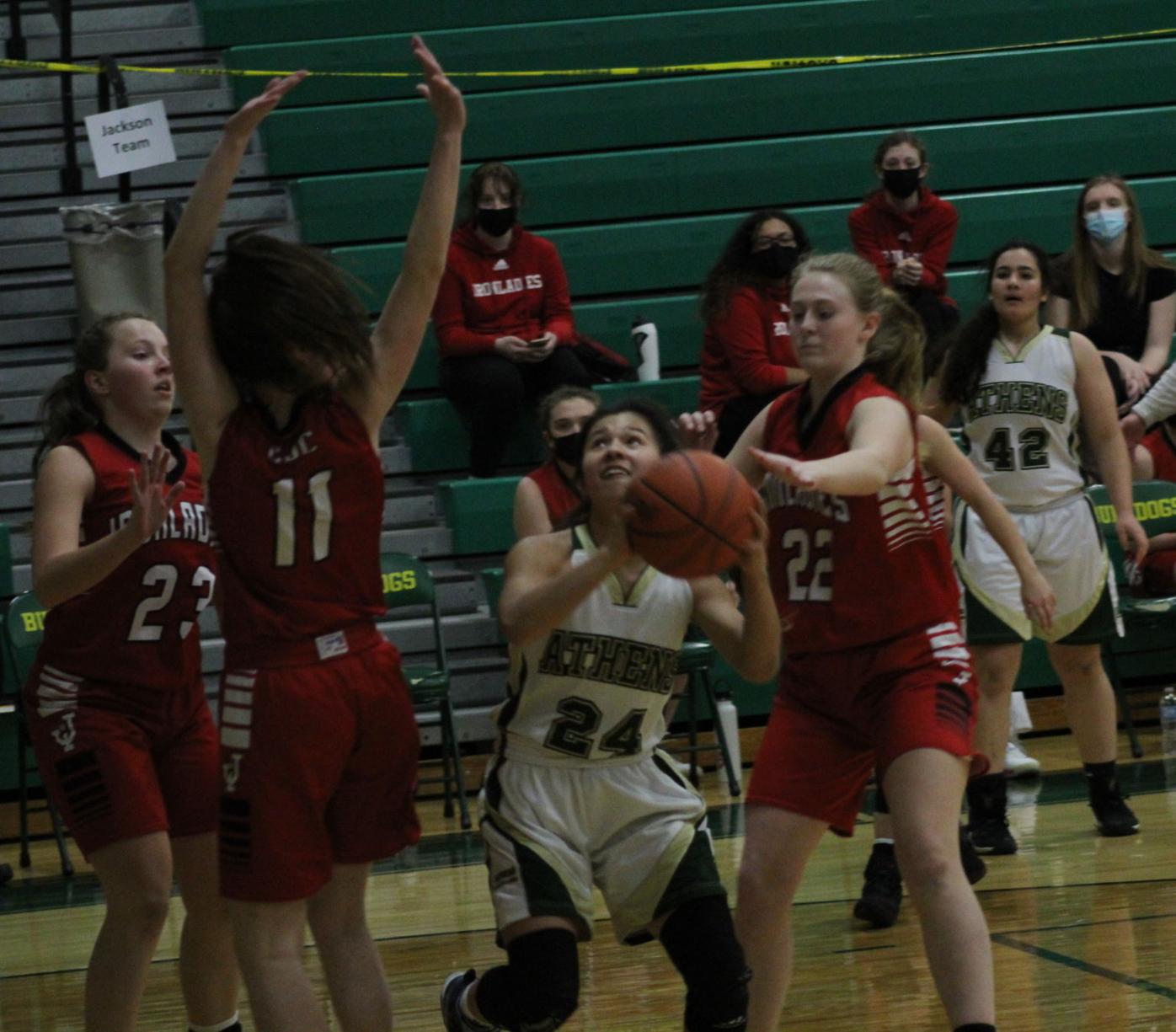 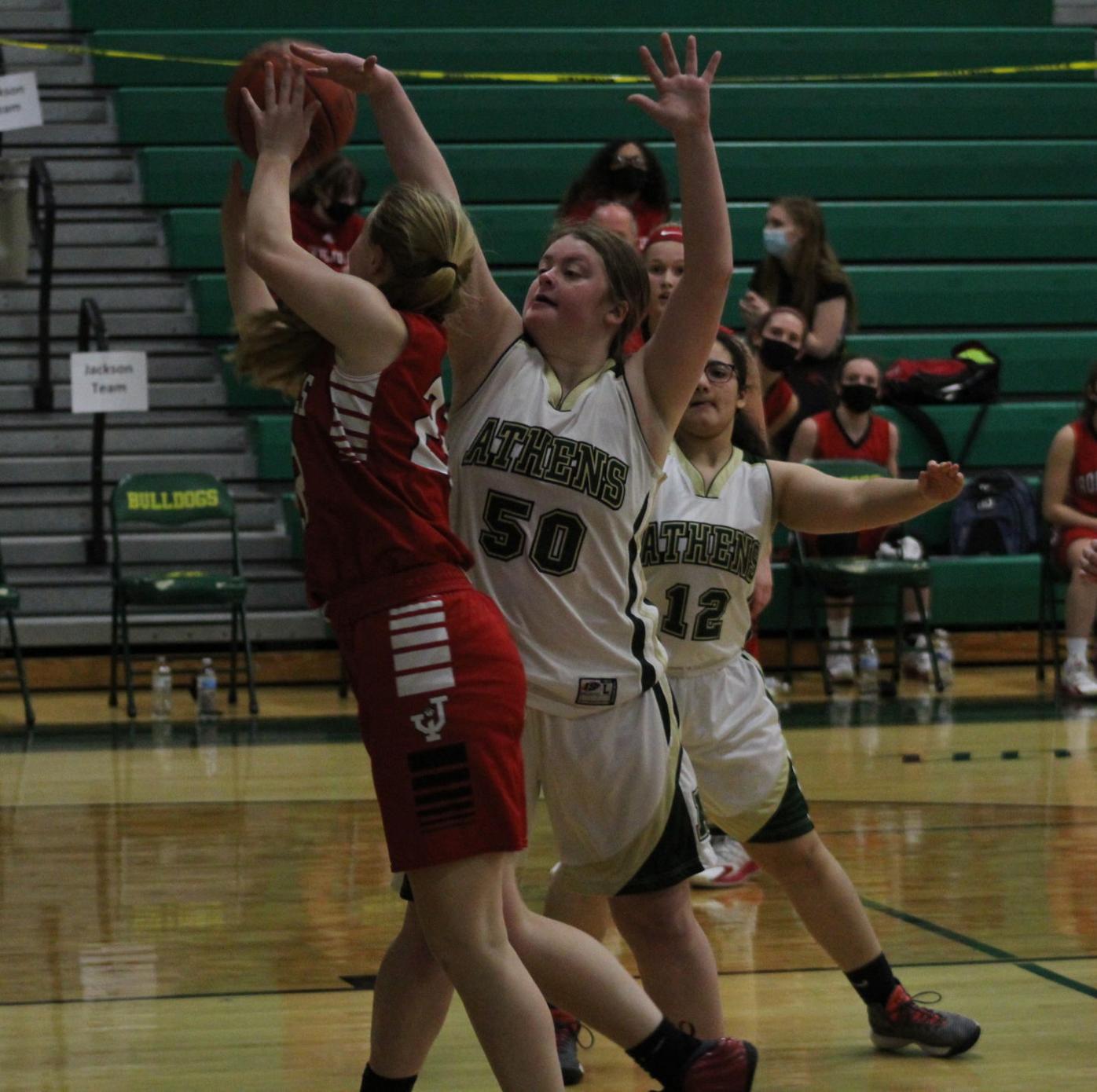 The Jackson Ironladies were struggling to find their shot for most of the first three quarters on Thursday.

Once a few jumpers went in, they were finally able to breath a little easier against an Athens team that was up for the challenge.

Jackson used a 16-2 fourth quarter run to pull away from the Bulldogs, winning 44-32 at McAfee Gymnasium.

The Bulldogs were fighting on the defensive end, and trailing just 28-24 entering the final frame.

The first came on a jumper to the left of the foul line, on a feed from TJ Carpenter.

The second came on a baseline drive, with Walburn pulling up and sinking a shot for two more points.

Finally, Carpenter was able to dish out to Katelyn Webb, and her 3-pointer from the right wing allowed Jackson to lead 35-24.

The Ironladies entered the fourth quarter just 9 of 47 from the field, but those three makes to start the quarter provided a lead Athens would have a hard time coming back against.

“We missed a lot of layups too, a lot of stuff around the rim,” Jackson coach Matt Walburn said. “These kids will grind it out, keep firing it. We finally hit a couple buckets that got us started. We went on a nice little run.”

Up until that point, Athens was able to slow the game down and keep within striking distance of Jackson (4-7).

Athens (1-9) had erased a nine-point deficit in the third quarter, but wasn’t able to duplicate that feat in the fourth.

“We were trying to slow down and control the game,” Athens coach Phil Koska said. “Just play our game. We’ve got to really buckle down and work on that.”

Once Jackson built up the double-digit lead, freshman Kenzie Davis made sure Athens got no closer.

She scored seven points in a row for the Ironladies, scoring off consecutive feeds from Sydney Hughes at one point.

Davis battled most of the night against Athens’ center Haylie Mills.

Mills more than held her own with seven points, 14 rebounds and eight blocked shots.

“She did excellent tonight,” Koska said. “I was very proud of her. She controlled the paint for the most part. She was boxing out. She was getting the rebounds, playing straight-up defense like we’ve been trying to get her to do. We know she can do it.”

There were a lot of numbers to like in regards to Athens’ defense. Led by Mills, the Bulldogs had 12 blocks as a team, as Harper Bennett and Emily Zuber each had a pair. Athens won the rebounding battle, 44-37.

“Trying to play solid defense has been our focus the last few games and we’ve been executing fairly well and getting people back this week has really helped,” Koska said.

A key statistic in Jackson’s favor was turnovers, as the Ironladies were guilty of only 12 in the game. Athens committed 29 turnovers, and as a result had 12 fewer shot attempts.

Despite those results, Matt Walburn said Jackson’s defense can do better.

“It just wasn’t one of our better efforts and we pride ourselves on our defensive effort,” he said. “Probably more than anything, there wasn’t much communicating. There wasn’t much talking to each other, helping each other up. That mentality of, ‘Let’s go get this one. Let’s win on the defense end.’”

Jackson built up a 22-13 lead at halftime, but Athens would rally back to tie the game.

Bailey Davis’ 3-pointer brought the Bulldogs to within 22-18, and Bennett set up Mills for a layup inside to make it 22-20.

Mills would later sore on a put-back basket, and Athens had tied the contest at 22-22 with 4:04 left in the third quarter.

“We jumped out and we came out we started executing and things started going in our favor,” Koska said. “I was hoping to carry that momentum into the fourth quarter.”

Jackson didn’t blink, with Carpenter scoring six straight points. The final basket came on a steal and layup for a 28-22 advantage.

Jackson has four freshmen in the starting lineup, surrounding the junior point guard in Webb.

The young lineup is already making strides. Jackson had just five wins combined the last two seasons, but is already a win away from matching that total this season.

Thursday’s game didn’t always go the way the Ironladies planned, but it’s all part of the learning process.

“We’re happy to get a win,” Matt Walburn said. “Been hard to come by the last couple of years at Jackson, so we’ll work on getting better.”

The Bulldogs aren’t as youthful as the Ironladies, but they only have one senior in the program. They honored Elena Delach before Thursday’s game, and she was able to join the starting lineup for the first 2 minutes and 32 seconds of the contest.

The Bulldogs host Wellston on Saturday at 1:30 p.m in a makeup game, before traveling to Trimble on Monday.

Athens continues to play hard, as evidenced by Thursday’s effort against Jackson. If that continues, Koska knows more victories will come now that his squad is returning to full strength.

“We’re going to make it a fight for every game,” he said. “We’re hoping to keep pushing on that defense so we can eventually turn the corner with our offense and start scoring and letting these girls get back with a ‘W.’”