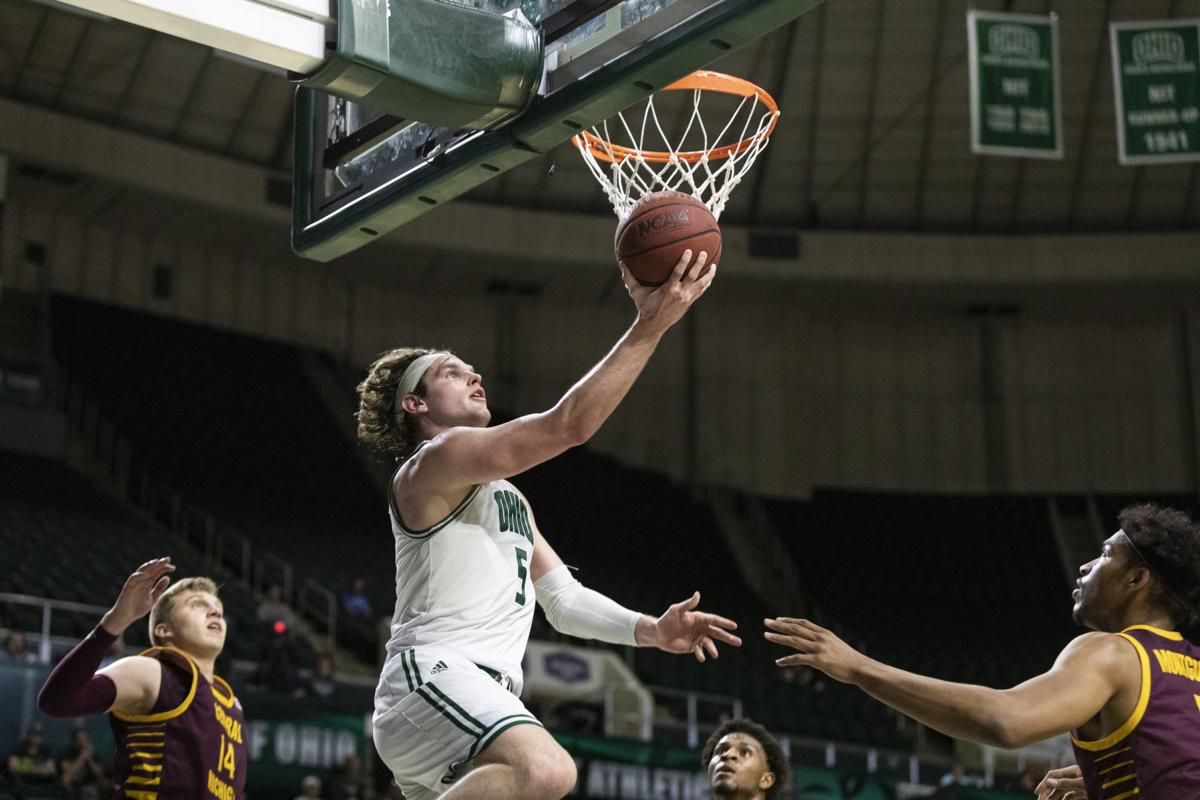 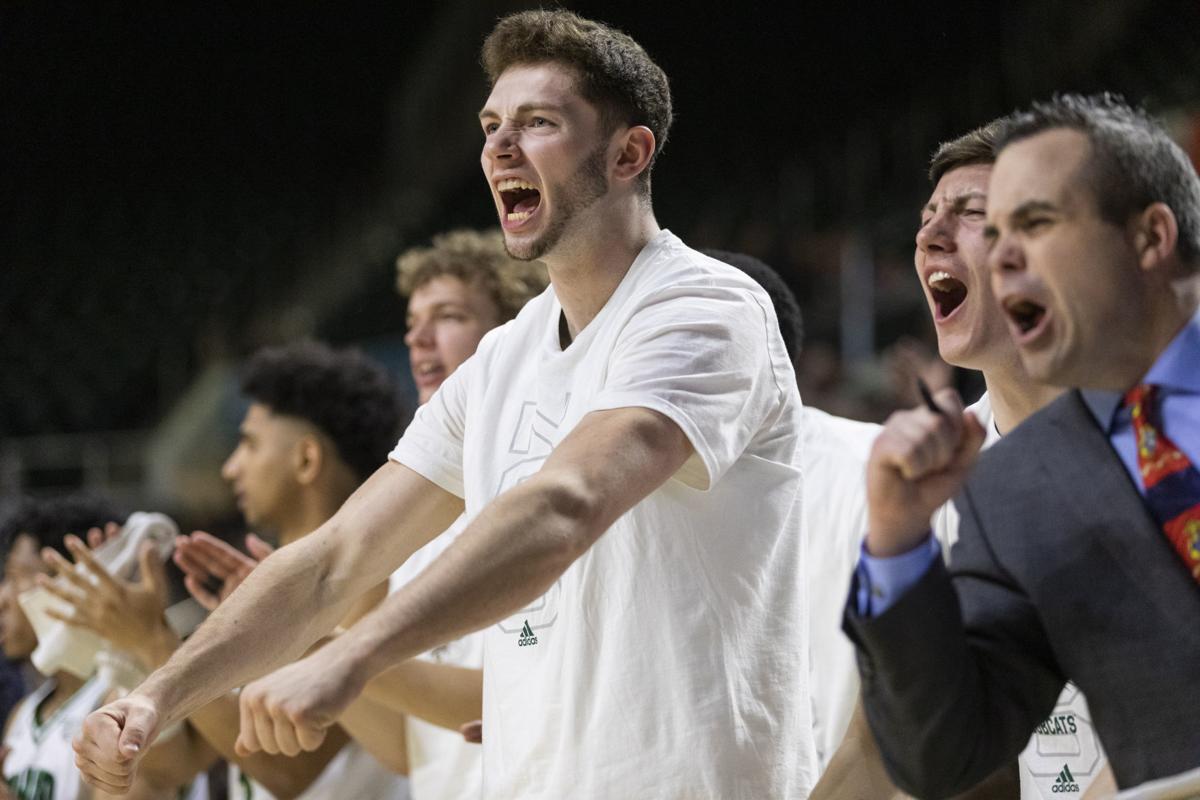 Ohio redshirt freshman forward Mason McMurray leaps off the bench during the Bobcats’ 85-65 win over Central Michigan on Monday, March 9, 2020 inside the Convocation Center. Ohio (17-15) advanced to the MAC Tournament quarterfinals, on Thursday, March 12 in Cleveland, with the win.

Ohio redshirt freshman forward Mason McMurray leaps off the bench during the Bobcats’ 85-65 win over Central Michigan on Monday, March 9, 2020 inside the Convocation Center. Ohio (17-15) advanced to the MAC Tournament quarterfinals, on Thursday, March 12 in Cleveland, with the win.

From the moment the season began, Jeff Boals believed the Bobcats would go as far as sophomores Jason Preston and Ben Vander Plas took them.

In the middle of the Mid-American Conference season, with the Bobcats scuffling defensively, Boals said it was the sophomore pair who began a commitment for the team to that end of the floor.

And because of those efforts and preparation, Preston and Vander Plas now have Ohio back at the Mecca for MAC hoops.

The win moves Ohio (17-15) into the MAC Tournament quarterfinals. OU, the No. 8 seed, will face No. 1 seed Akron (24-7) at 12 p.m. on Thursday at Rocket Mortgage FieldHouse in Cleveland. It’s Ohio first trip the MAC quarterfinals since 2017.

“It’ll be my first trip. I’m on my third year so I’m excited. That’s all I can say,” said Vander Plas. “We’re not satisfied yet.”

Central Michigan (14-18) never led and trailed by double figures for each of the final 35 minutes. The Bobcats came out locked in and ready to go, and dominated from the start.

“An emphasis was to punch them in the mouth early and really set the tone on both ends and I think we did that,” Preston said.

“Just knowing the moment. This is March. The season’s over if you lose,” he added. “If this doesn’t make you wake up, I don’t know what does.”

Ohio will head to Cleveland playing its best basketball of the season. The Bobcats have won seven of their last 10 games, have improved dramatically on the defensive end, and with Vander Plas and Preston have two of the best young players in the league.

The sophomore duo shot a combined 16 of 26 from the field and combined for just five turnovers and more than 75 combined minutes. Ohio was 2-7 at the midway point in conference play and seemed to be sinking under the weight of youth, inexperience and close losses. The Bobcats have five conference losses by a total of 15 points.

But the trials didn’t break Ohio, it made it strong enough to lead a late-season charge back to Cleveland.

“Those games have helped us. The freshmen have grown through those things. (Preston) and (Vander Plas), they haven’t been in these roles before. We ask those guys to do a lot,” explained head coach Jeff Boals.

“They’re carrying out game plans. They’re making adjustments. Those guys don’t panic, like a young team might. I think that’s a big reason why.”

Ohio led 60-31 with just over 15 minutes remaining, but fell into a funk fueled by turnovers and fouls. The Chippewas managed to take advantage and the margin all the way down to just 10 — 75-65 — with 2:40 left.

But Vander Plas found McDay, who finished with a nifty reverse layup. A pass from McDay led to Vander Plas being fouled and two made free throws. And McDay added the capper, a soft lob pass to Preston for a transition dunk. It was all part of a game-ending 10-0 Ohio run, and McDay was in the middle of it.

“He’s a gamer, he’s a dog,” Preston said, meaning it as an honorific.

Kevin McKay put up 18 points for CMU, while Dallas Morgan added 14 points and Rob Montgomery chipped in 10. But the Chips were out-rebounded 42-28, and Ohio chased CMU off the arc; the Chips were an ice-cold 3 of 25 from 3-point range.

“Awesome job by our guys,” Boals said. “Really proud of their effort, their preparation.”

Ohio put the game away in the first half, and managed to make it hold up.

Preston led the charge right from the start. He stuck a deep 3-pointer on OU’s first possession, fired a pass on the break to McDay for a layup, and scored on a back-door cut of his own as the Bobcats raced out to a 7-0 lead before the game was two minutes old.

By the time Vander Plas scored eight points on five possessions — thanks to four bully-buckets inside — Ohio led 21-6 with less than eight minutes gone.

CMU managed to cut it to 31-19 with five minutes left in the half, but Ohio landed another flurry. Vander Plas and Dartis hit back-to-back 3s. Preston set up Sylvester Ogbonda for a dunk. Ben Roderick beat the shot clock with a deep 3 from the right side.

And Preston capped the sharp first half — Ohio shot 60.7 percent — with a three-point play on a fast break layup.

The Bobcats led 45-23 at the half, and never looked back. Vander Plas had 17 first-half points, after missing OU’s game on Friday with an ankle injury.

“I sat a whole season so I know what it feels like. Sitting that one game felt like an eternity,” he said. “Seeing the energy those guys at the end of that game really had me excited to come back out today.”

Ohio won’t be the favorite in the rest of the tournament. The Bobcats are too young, too thin to be expected to make a deep run in Cleveland. But Boals began tournament preparation by asking his team ‘Why not us?’

Nothing that happened Monday dulled any of the Bobcats’ enthusiasm for the days to come.

“It’s the fact we’re still in it. We’re one of eight teams left and we feel like we have as good a shot as anybody to win it,” Boals said.

“Can’t ask for more than that.”