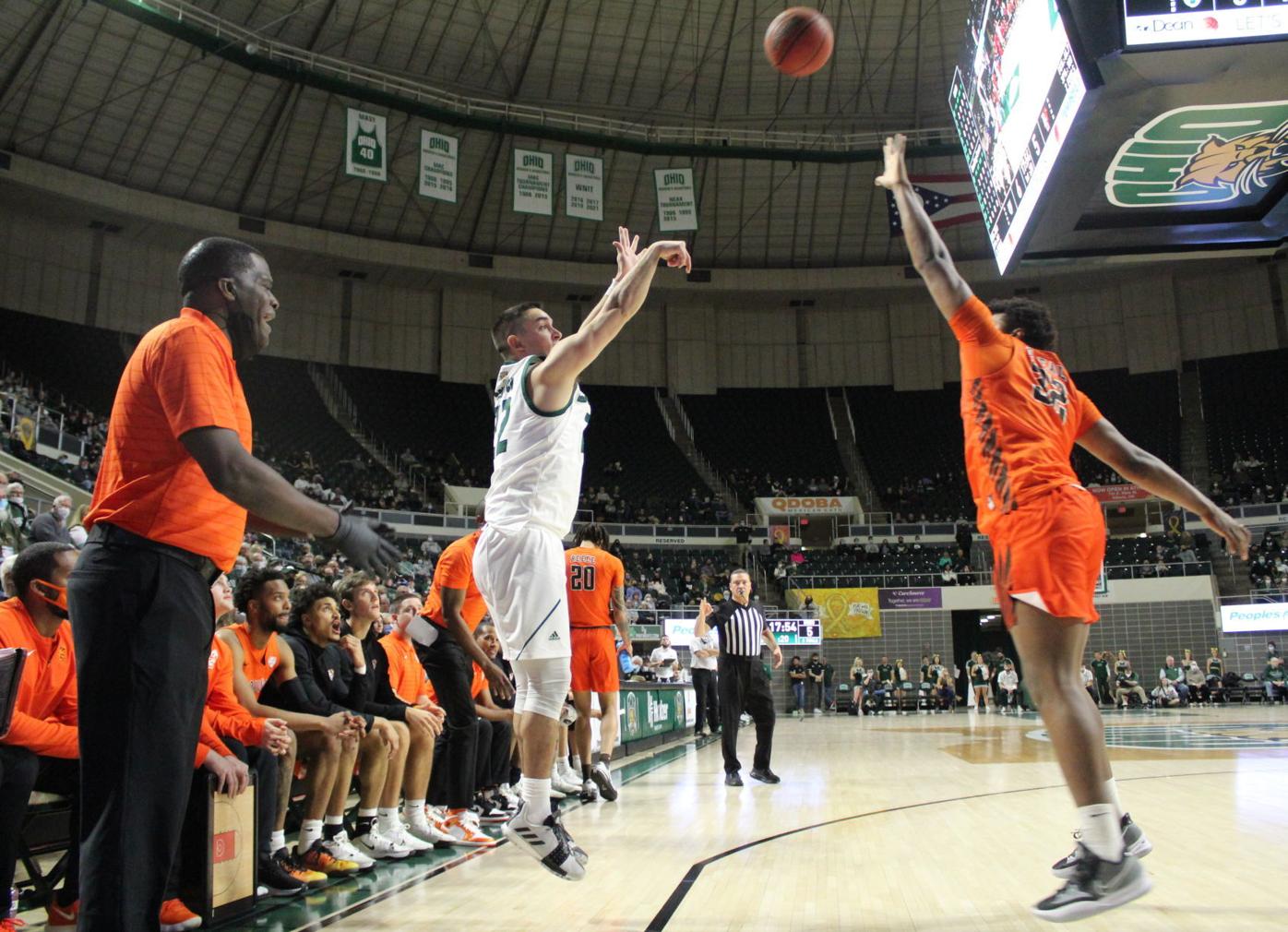 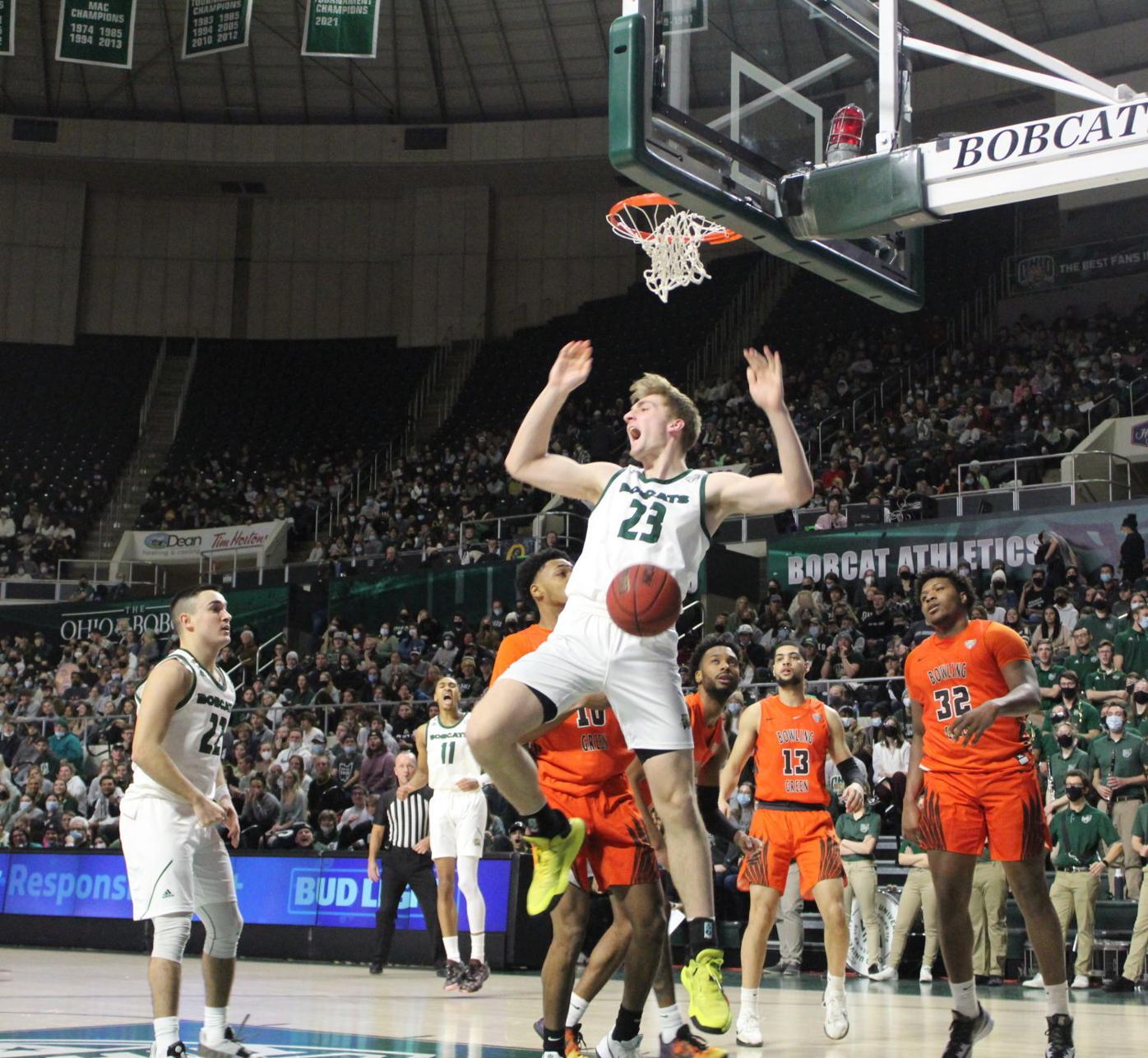 Ohio’s AJ Clayton celebrates after throwing down a dunk during the Bobcats’ 85-78 win over Bowling Green on Tuesday. Clayton, a freshman, scored a career high 12 points.

Ohio’s AJ Clayton celebrates after throwing down a dunk during the Bobcats’ 85-78 win over Bowling Green on Tuesday. Clayton, a freshman, scored a career high 12 points.

Tommy Schmock made the most of his opportunity, and Ohio University cashed in on another victory.

Schmock nailed four 3-pointers in his second consecutive start, aiding Ohio to an 85-78 victory over Bowling Green on Tuesday inside the Convocation Center.

Schmock, a senior transfer from Findlay, had his most productive game of the season for the Bobcats.

He finished with 17 points on 5 of 10 shooting — including 4 of 7 from long range — to go with seven rebounds and two assists.

“I thought Tommy did really well playing extended minutes, which he’s never played this whole year,” Ohio coach Jeff Boals said. “The thing with Tommy, he set the tone from the start with full-court defense.”

Schmock has started the last two games in place of Miles Brown, who is in COVID protocols. With Lunden McDay currently out as well for personal reasons, Ohio is thin at guard.

That has opened the door for Schmock, and he answered the call with more than 38 minutes played against the Falcons. His previous high in minutes played this season was 23 against Saint Francis.

“Just be ready when you’re called on,” Schmock said.

Being shorthanded didn’t keep Ohio from improving to 9-0 in home games. The Bobcats (13-2, 4-0 Mid-American Conference) won for the eighth game in row to continue their perfect start in conference play.

The Falcons (8-7, 1-3 MAC) didn’t make it easy on the Bobcats, but Bowling Green also never led in the game.

“We won a different way today, because we’ve never really been in a close game the whole game,” Schmock said. “To pull it out late, that’s just another good way we can win.”

Jason Carter had a strong game, leading Ohio with 22 points, eight rebounds and three assists. Mark Sears shook off a 4 for 12 shooting game to still post 19 points, six rebounds and two assists. Sears made all 10 of his free throw attempts.

It was another game that was tight down the stretch, only for the Bobcats to pull away in crunch time.

Bowling Green was within 58-57 with 7:38 remaining after Chandler Turner’s 3-pointer.

The Bobcats didn’t flinch, as the Falcons went 2 minutes and 36 seconds without scoring.

That was enough of a Bowling Green drought to allow Ohio to run off eight straight points, leading 66-57 after two Ben Vander Plas free throws.

“This team does a great job of staying locked in and supporting each other,” Carter said. “We don’t get too high. We don’t get too low. We know when the moment comes, we know what we need to do.”

Schmock delivered one of the biggest shots of the second half. He got a pass from Carter and squared up well behind the 3-point line on the left wing.

The shot swished through the net much to the delight of the Convo crowd, as Ohio led 75-65 with just 2:27 remaining.

“Made some great reads and those were huge 3s he hit,” Boals said of Schmock.

The Falcons never cut the deficit to a one-score game the rest of the way. The Bobcats’ final 10 points came at the free throw line, as they made 23 of 30 from the charity stripe in the contest.

Freshman AJ Clayton hit double figures for the first time in his young Ohio career. He hit a trio of 3-pointers off the bench to score 12 points.

“He has all the tools to become the best player in the league,” Carter said. “He’s just scratching the surface.”

Daeqwon Plowden and Myron Gordon each scored 18 points to lead the Falcons, who hung tough with the defending MAC Tournament champion Bobcats but could never find a way to forge ahead.

Ohio will hit the road for its next two conference games, starting with a trip to Central Michigan on Saturday at 4:30 p.m. The Bobcats will head to Miami on Tuesday. Boals said the expectation was that Brown would be able to return for those road games.

The Bobcats have high expectations after winning an NCAA Tournament game over Virginia last season. Through 15 games, Ohio looks every bit the favorite in the MAC, but Boals said they have to continue to put in the work.