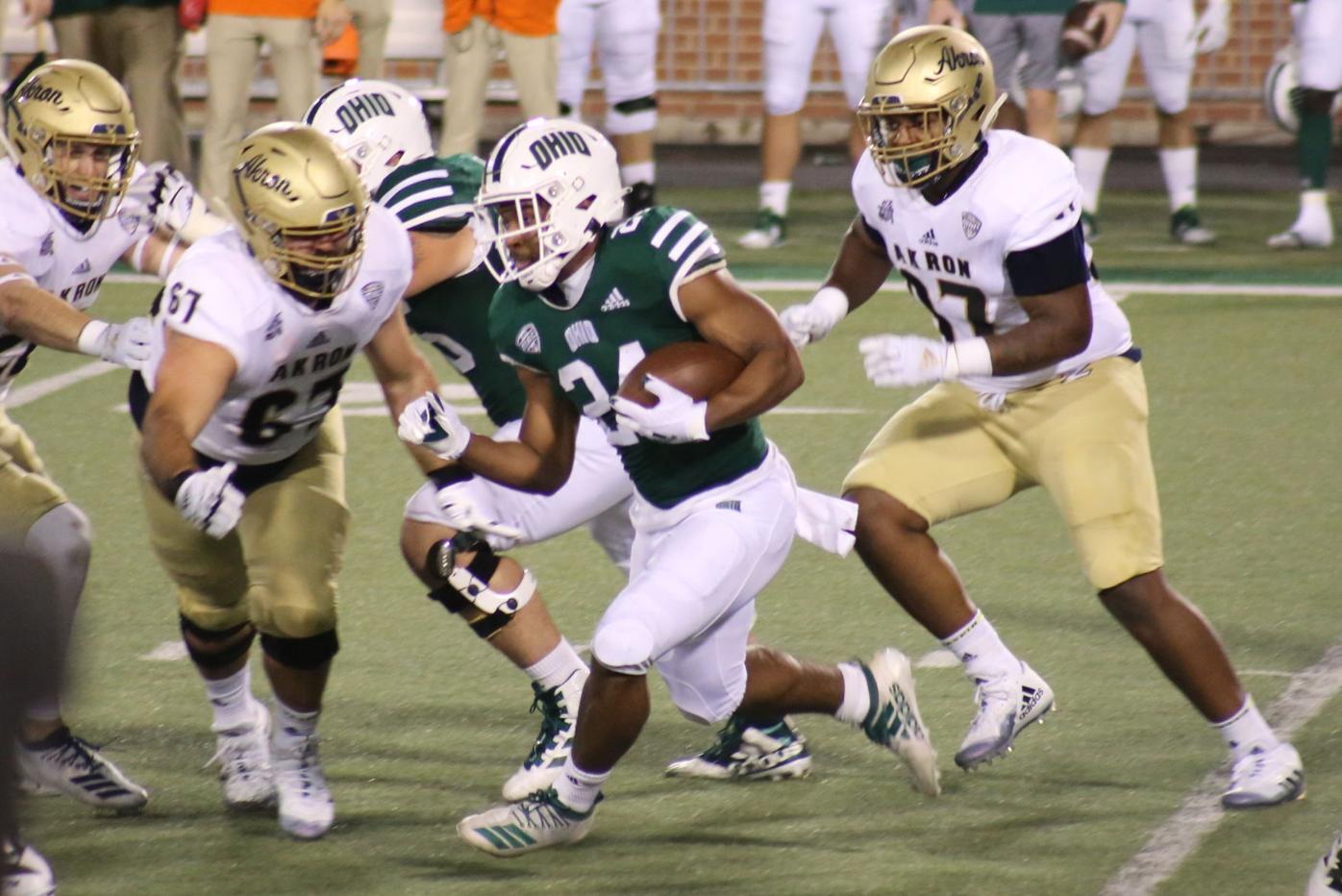 Ohio’s De’Montre Tuggle (24) runs against Akron’s Logan Hawkins (67) during Tuesday’s Mid-American Conference game at Peden Stadium. Tuggle rushed for 139 yards and two touchdowns, leading the Bobcats to a 24-10 win over the Zips. 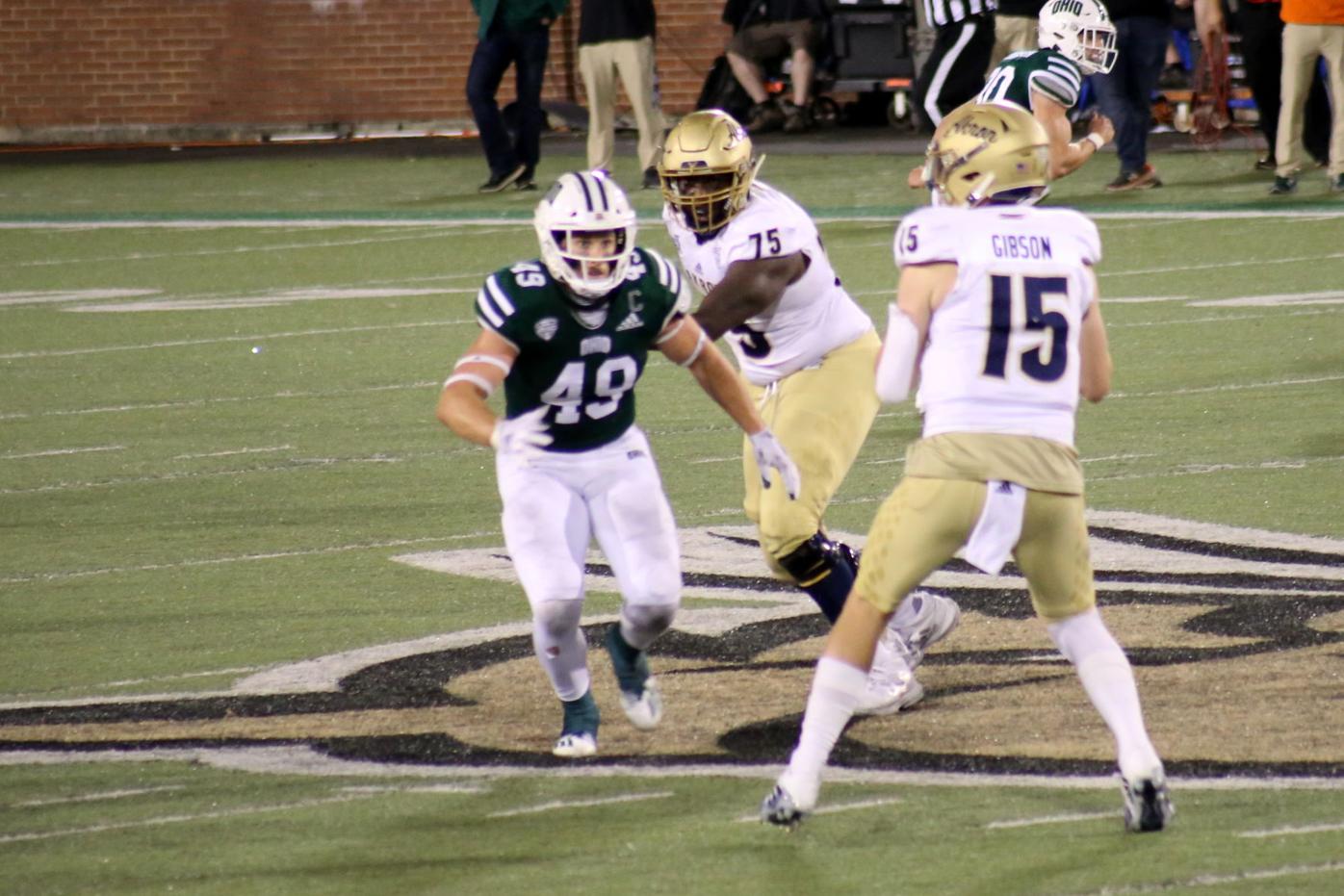 Ohio’s Jared Dorsa (49) pressures Akron quarterback Zach Gibson (15) during Tuesday’s Mid-American Conference game at Peden Stadium. The Bobcats improved to 1-1 on the season with a 24-10 victory.

Ohio’s De’Montre Tuggle (24) runs against Akron’s Logan Hawkins (67) during Tuesday’s Mid-American Conference game at Peden Stadium. Tuggle rushed for 139 yards and two touchdowns, leading the Bobcats to a 24-10 win over the Zips.

Ohio’s Jared Dorsa (49) pressures Akron quarterback Zach Gibson (15) during Tuesday’s Mid-American Conference game at Peden Stadium. The Bobcats improved to 1-1 on the season with a 24-10 victory.

In need of a victory on their home turf, the Ohio Bobcats turned to their most sure weapon in the early part of the season.

Ohio rode the efforts of running back De’Montre Tuggle in a 24-10 victory over the Akron Zips on Tuesday inside Peden Stadium.

Tuggle had a career day with 139 yards rushing on 22 carries, scoring two touchdowns.

The much-needed victory improved the Bobcats to 1-1 both overall, and in the Mid-American Conference. Akron falls to 0-2 after its 19th consecutive defeat.

The game was anything but a runway though, and Akron actually out gained Ohio in total yardage, 435-307. The Bobcats were plus-three in the turnover battle, as Jett Elad and Keye Thompson each had interceptions and Jarren Hampton recovered a fumble.

Ohio used two quarterbacks in the game in Kurtis Rourke and Armani Rogers.

Rourke was 8 of 14 passing for 92 yards, while Rogers completed 2 of his 3 attempts for 30 yards. Rogers also added 17 yards and a touchdown on the ground.

While Ohio mostly controlled the game, it had a difficult time putting the Zips away.

Leading 17-10, Elad came up with his interception against Akron quarterback Zach Gibson, setting Ohio up at the Zips’ 19-yard line with 12:41 remaining in the fourth quarter.

The Bobcats quickly got the ball back when Thompson came up with his interception of Gibson, returning it 28 yards to the Akron 18-yard line.

The Zips were still in the game, but on third-and-one from their own 29-yard line, Teon Dollard was stuffed by the Ohio defense, with Elad leading the way.

Akron punted the football, and Tuggle made sure the game was over from there.

The senior, from Channelview, Texas, put the Bobcats on his back on their final drive. He carried the ball nine consecutive plays on a 70-yard scoring drive.

Ohio never trailed in the contest. It opened the game with a six-play, 62-yard scoring drive, capped by Tuggle’s nine-yard run for a 7-0 lead.

The Bobcats then opened the second quarter with Rogers’ 1-yard touchdown run. Ohio led 14-0 with 12:27 left in the first half.

Akron was able to get on the board right before halftime thanks to Gibson’s 14-yard scoring pass to Nate Stewart. The Zips drove 97 yards in nine plays, a 35-yard pass from Gibson to George Qualls getting Akron off its own goal line.

Akron further cut the deficit to 14-10 after Cory Smigel’s 34-yard field goal with 9:47 left in the third quarter.

Ohio answered with a successful 44-yard field goal for Vandenburg, allowing the Bobcats to lead 17-10 with 6:27 left in the third quarter.

Gibson completed 18 of 30 passes for 218 yards for Akron with one touchdown and two interceptions. Dollard had success on the ground, gaining 165 yards on 22 carries. Qualls caught three passes for 64 yards, while Tony Grimes had five receptions for 60 yards. Stewart caught five passes for 59 yards.

Ohio will travel to Miami on Tuesday for an 8 p.m. kickoff.