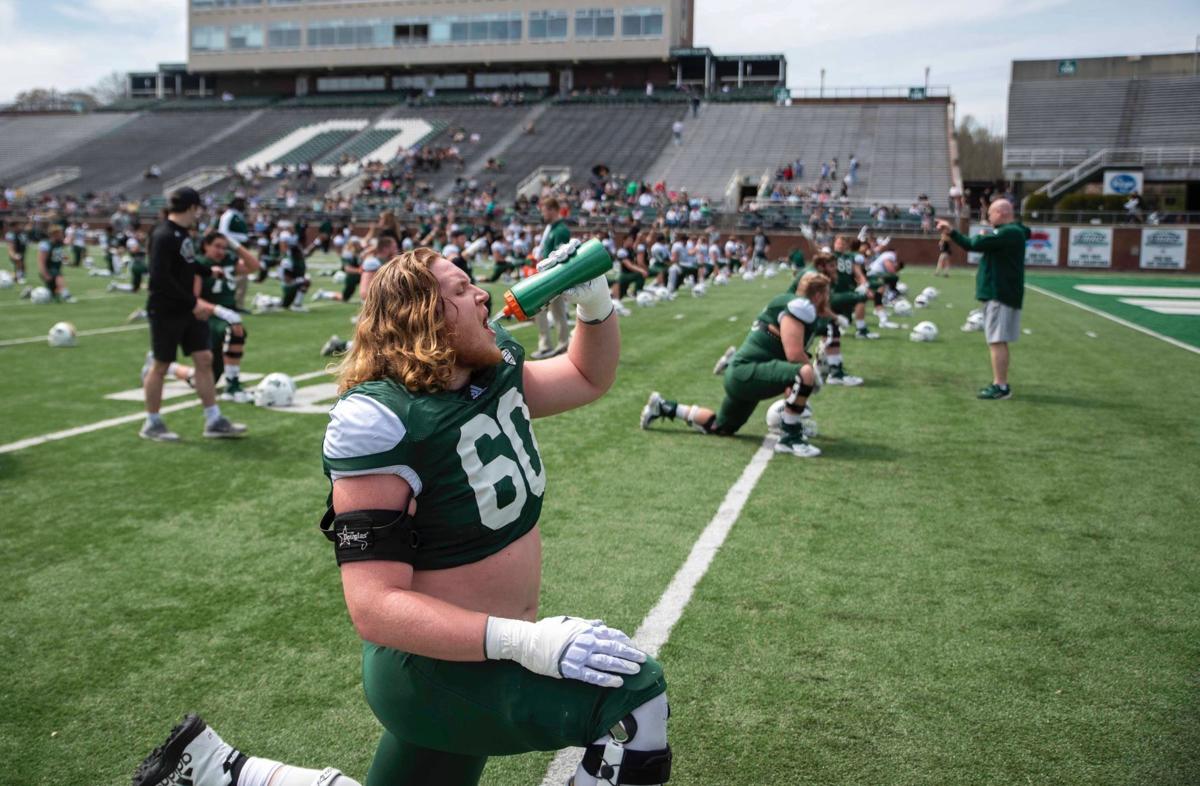 Ohio senior Austen Pleasants (60) takes a drink during stretching prior to the 2019 Ohio Football Green and White Game inside Peden Stadium in April. Pleasants is one of three fifth-year seniors expected to start on the offensive line. 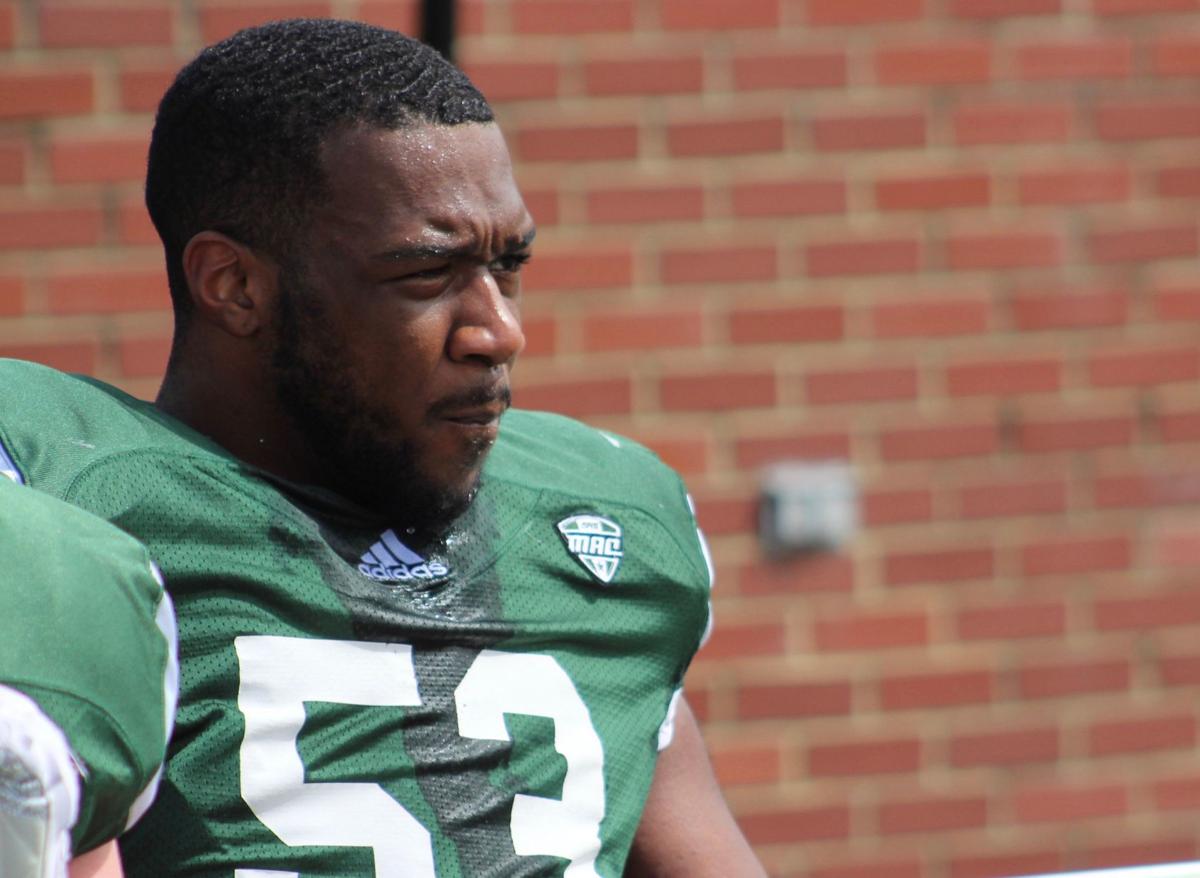 Ohio senior Marques Grimes, seen here during the Green & White scrimmage in April, will be competing to be a first-time starter on the offensive line in 2019.

Ohio senior Austen Pleasants (60) takes a drink during stretching prior to the 2019 Ohio Football Green and White Game inside Peden Stadium in April. Pleasants is one of three fifth-year seniors expected to start on the offensive line.

Ohio senior Marques Grimes, seen here during the Green & White scrimmage in April, will be competing to be a first-time starter on the offensive line in 2019.

Editor’s Note: This is the fourth in a nine-part series outlining the 2019 Ohio Football roster. The series will break down nine parts of the program in the coming weeks, with a look at who returns, what’s changed, and what’s to come at each position. The series continues today with a look at the Ohio’s offensive line.

This story appears in the Thursday, June 20 newspaper on Page A7.

Because of necessity, Frank Solich has learned recently what he wants — exactly — out of an offensive line coach.

This winter, Solich — Ohio’s head coach entering his 15th season with the Bobcats — hired an OL coach for the third time in four years. Ohio lost its OL coach in each of the past two offseason after the Bobcats put up the two best offensive seasons in Solich’s long tenure — and in program history — with the program.

Solich believes he’s found another good fit with Allen Rudolph, and anticipates another strong season in the trenches.

“You know what you want to see out of an assistant coach,” Solich explained in February. “And with (Rudolph) there was very much a sense that we see things and approach things the same way.”

That ‘way’ is the offensive line should be the tone-setter for the offense. The Bobcat big guys did that in each of the previous two seasons when Ohio averaged north of 39 and then 40 points per game.

“O-line guys — the players not the coaches — all want to be physical, no doubt,” Rudolph said. “They want to come off the football. They want to hit. That’s a Coach Solich trait too.

“We’re going to be a physical football team.”

But can Ohio be as effective as in 2018? That group featured three all-conference level starters — program fixtures in Joe Lowery, Durrell Wood and Joe Anderson — and all three have moved on.

A rebuild is on the horizon, right? Well, no, said redshirt senior tackle Austen Pleasants.

“I don’t think we’re worried about that,” said Pleasants, who has started the last 20 games at right tackle but will move to the left side this season.

“Our thing is ‘No limits.’ We lost some guys, but guys are going to step up,” he continued. “That’s just how the game is. Next man up. Keep grinding.”

Ohio won’t be starting from scratch on the OL. Pleasants could be another All-MAC performer, and is one of three fifth-year seniors in the expected starting lineup. Ohio will return four players with starting experience, including three from last season.

Fifth-year center Steven Hayes took over as a starter midway through 2018. Junior Brett Kitrell began ’18 as the starting center, and will slide over to left guard. Junior Hagen Meservy was an every-game starter at right guard as a freshman in 2017, and backed up Wood there last season; he’ll be back as the starter at RG.

Even the one relatively new piece up front — right tackle Marques Grimes — is an old hand. Grimes is a fifth-year senior, played a small part in the rotation last season, and has earned his spot with a strong spring after two injury-marred seasons.

“The first group had a great spring,” Solich said. “They were consistent, came together well and I thought did a great job.

“Now we just have to keep getting those young guys coming along.”

Depth is the bugaboo for Ohio on the offensive line. The backup tackles in the spring were a walk-on sophomore and a redshirt freshman. Injuries knocked out the top depth options on the interior this spring as well.

Finding a cohesive second unit will be a primary focus in fall camp, and likely could be impacted by the 2019 signing class. The ’19 group featured six more offensive linemen, including junior college transfer Gary Hoover who is expected to compete right away at OT.

If Hoover, or sophomore Samson Jackson, or junior Felipe Fernandez take a step up in fall camp, Solich will feel much better about his tackle depth.

Rudolph believes the culture in the meeting room will lend itself to developing that necessary depth. Ohio lost three seniors, but has three more waiting to lead the way.

“They’ve done an unbelievable job of establishing the culture within that room,” Randolph said. “I’m not out there on the field when the ball is snapped. That’s when our culture takes over.

“I feel good about these guys. We’ll figure it out.”

Ohio returns four players with starting experience, and in Pleasants could have another all-conference tackle. Pleasants has started 20 straight games at RT, but will be switching to cover Nathan Rourke’s blindside in 2019. Hayes took over as the starting center midway through last season, and Kitrell has played center and both guard spots over the last two seasons. Meservy was a starter at RG in 2017. The only true newcomer up front in the starting five is Grimes, who was beset by injury the last 18 months or so. Grimes took big strides this spring.

The graduation losses were steep on the OL. Lowery is one of the best tackles during Solich’s run at Ohio, and he teamed with Anderson to give the Bobcats a dominant left side in 2018. Wood was in his sixth season and started games in four different seasons at Ohio, including going the distance in 2018.

This is the group that needs to get settled in fall camp. Fernandez, Sink and Danneker all missed most, or the entirety, of spring camp with injuries issues, but all three also got some game reps in 2018. Notestine is coming off a torn chest muscle in 2018 that cost him a chance at playing time. The backup/depth list will likely be impacted by the 2019 signing class as well.

Jackson was supposed to be the left tackle of the future, but injury has slowed his progress and his unavailability this spring left Ohio turning to walk-on Rodgers (an Athens HS grad) as the backup LT in spring camp. Gilliland was pressed into duty as the backup RT after Fernandez was injured. Irland has been out for a full year (foot injury), while Ramer, Kieffer and Beckett are still cutting their teeth.

Ohio again loaded up on the OL in the signing class and it’s anticipated that one or two in this group could help right away.

Hoover, a junior college transfer, is the leading candidate. Ohio is hoping he can plug in right away at tackle and be a solution to the depth issue there. Amburgey and Vannest are less seasoned, coming out of high school, but have the size/physical maturity to possible be factors at tackle as well. Former Ohio OL coach Bart Miller was thrilled when Aronokhale (from the Linsly School in W.Va.) committed and had pegged him to be an impact player at OG.

"There is real talent there," Ohio's offensive coordinator says.