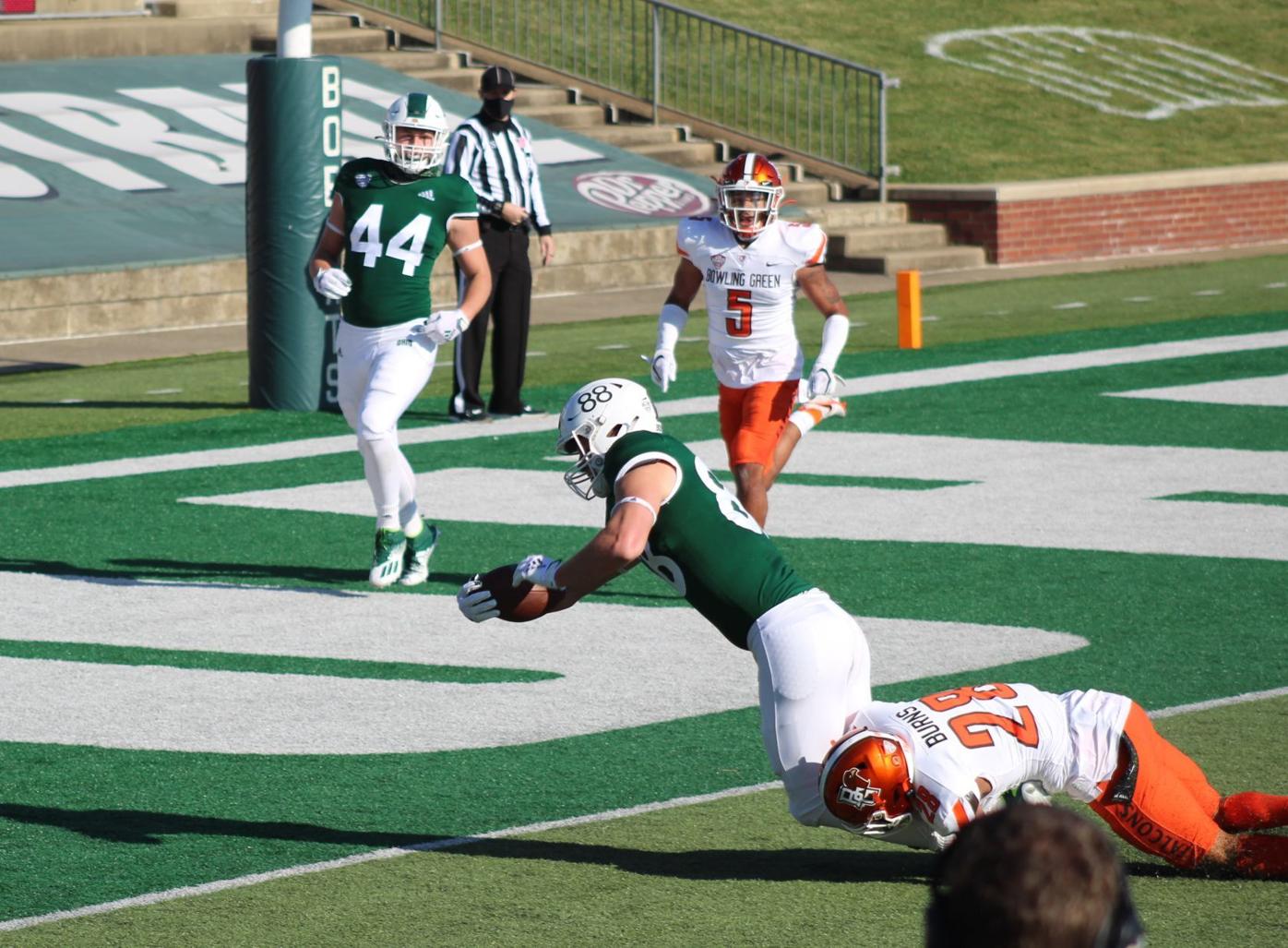 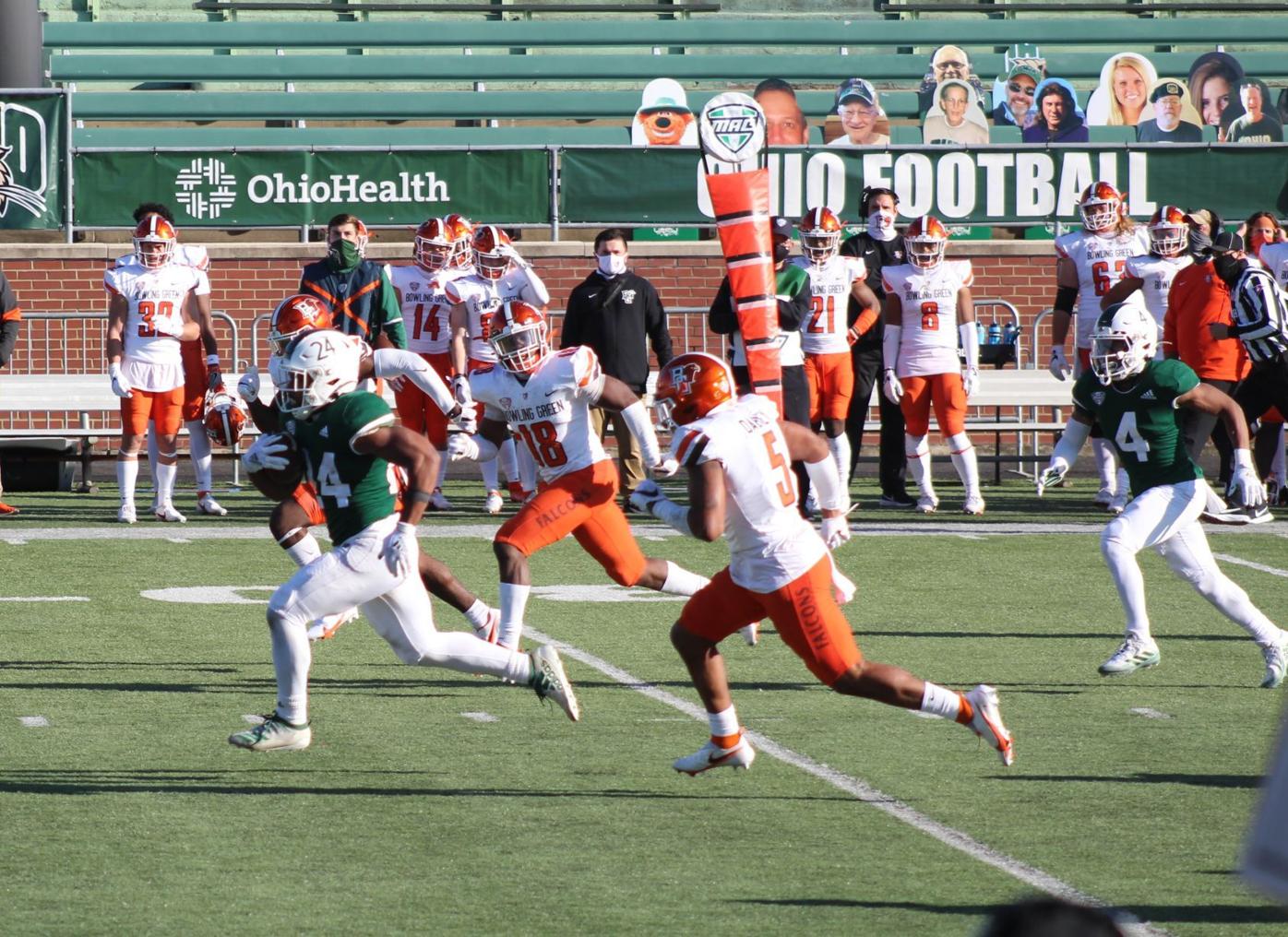 Ohio’s De’Montre Tuggle (24) races to the end zone for a 43-yard score in the third quarter. Tuggle scored three touchdowns in the Bobcats’ 52-10 win over Bowling Green on Saturday. 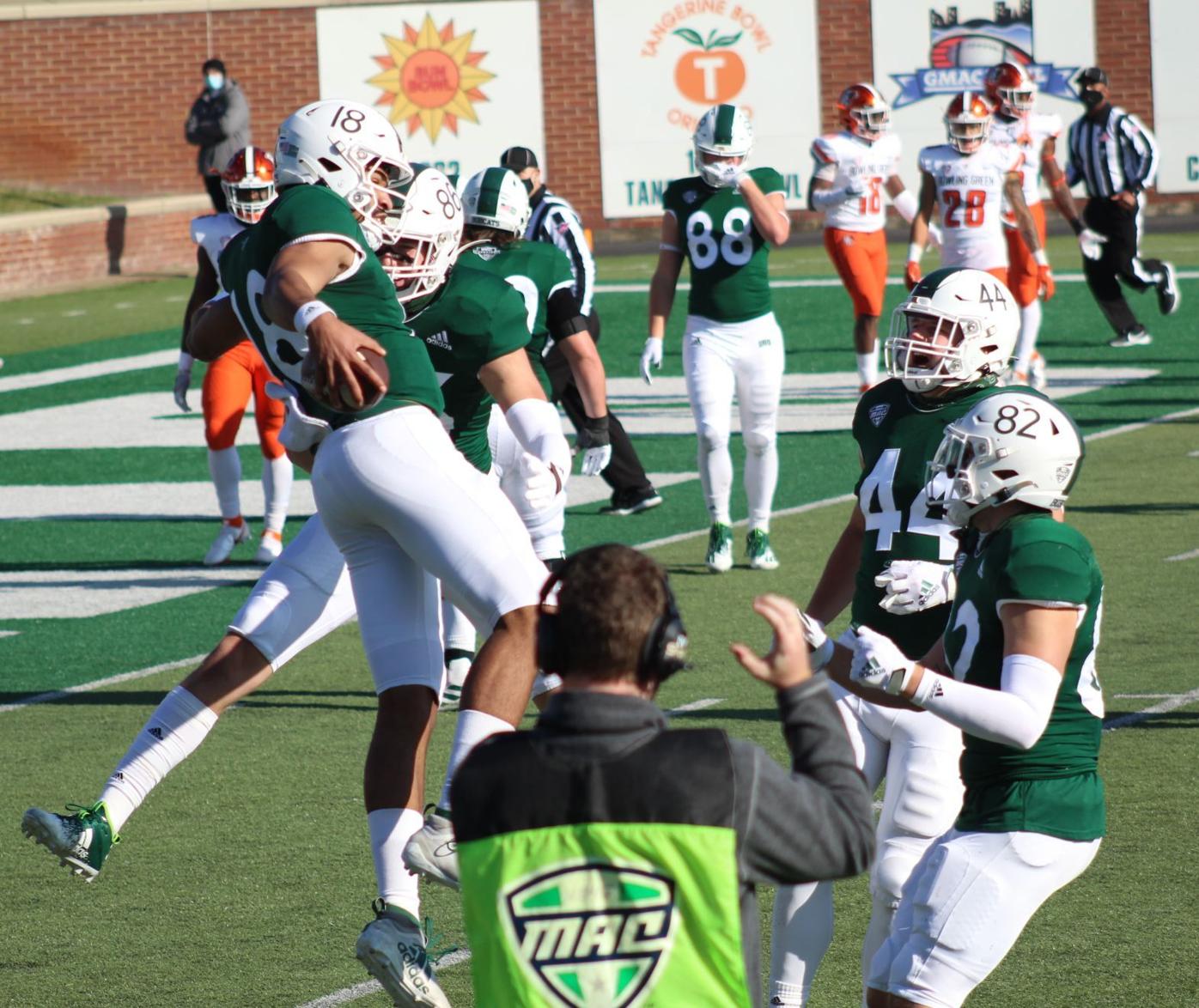 Ohio’s De’Montre Tuggle (24) races to the end zone for a 43-yard score in the third quarter. Tuggle scored three touchdowns in the Bobcats’ 52-10 win over Bowling Green on Saturday.

The Ohio offense got rolling in a big way, and the Bobcats appear poised for a potential surge down the home stretch of the Mid-American Conference season.

It marked Ohio’s first game in 18 days, but there were no signs of rust for the Bobcats.

Ohio gained 436 yards of total offense, 355 coming on the ground, and forced three turnovers on offense to keep the Falcons (0-4, 0-4 MAC) winless on the season.

Ohio honored the undefeated MAC Champions from 1960 with throwback uniforms, then put on a display the 10-0 Bobcats from 60 years ago would be proud of.

The Bobcats led 21-3 after one quarter, 45-10 at halftime and 52-10 after the first offensive drive of the third quarter.

The only negative on the day was a second-quarter injury to quarterback Kurtis Rourke. He appeared to hurt his shoulder after taking a hit on a completed pass.

Rourke completed 10 of 11 passes for 63 yards and a touchdown in his most efficient start of the season.

Armani Rogers was solid in relief, scoring a 29-yard touchdown on his first snap of the game. He added 65 yards on eight carries, also completing a 12-yard touchdown pass to Ryan Luehrman.

It was an overall successful day, as Bowling Green was held to 306 yards of total offense.

Ohio is now 2-1 in the MAC with showdowns coming against Buffalo and Kent State to close the regular season.

Tuggle got Ohio started quickly on Saturday, as the ‘Cats never trailed.

Tuggle only needed one play to find pay dirt on Ohio’s second possession. He took a carry to the left of his offensive line, found an opening and sprinted 70 yards for the score.

The Bobcats led 14-0, but were only getting started.

That only set the stage for Julian Ross. He returned the kickoff 96 yards for a touchdown, giving Ohio the 21-3 edge.

The Bobcats scored 24 points in the final 4:51 of the first half to hammer home the victory.

It started with Luehrman’s first touchdown, a 5-yard pass from Rourke. Luehrman was able to reach over the goal line while being tackled for the 28-10 advantage.

Rogers’ score followed, after Rourke’s injury. He ran right, then cut back to the middle of the field for the 29-yard score, and the 35-10 lead with 1:54 still to play in the first half.

Ohio’s Alvin Floyd collected an interception, quickly giving the ball back to Rogers and the offense.

Luehrman was able to reach over a defender’s helmet for the grab in the end zone, giving Ohio the 42-10 lead.

It appeared that would be all the scoring opportunities in the first half for Ohio, but the defense provided one more.

Bowling Green faced a fourth-and-10, and decided to go for a pass play. It was intercepted by Tariq Drake and returned 52 yards with only two seconds left on the clock.

That set up Tristian Vandenberg’s 30-yard field goal at the buzzer, and the Bobcats led 45-10 at the break.

Tuggle’s final touchdown came on the opening offensive drive of the third quarter, a 43-yard run that allowed Ohio to lead 52-10.

The big play capped a 10-play, 96-yard drive that followed a goal-line stand by Ohio’s defense.

Andrew Clair had 118 yards on 15 carries for the Falcons.

Next up for Ohio is a huge matchup at home against Buffalo, which moved to 4-0 with a massive 70-41 victory over Kent State.

Despite not taking the field for nearly three weeks, the Bobcats would still be very much in the conversation for a MAC East title if they knocked the Bulls off from the ranks of the unbeaten.