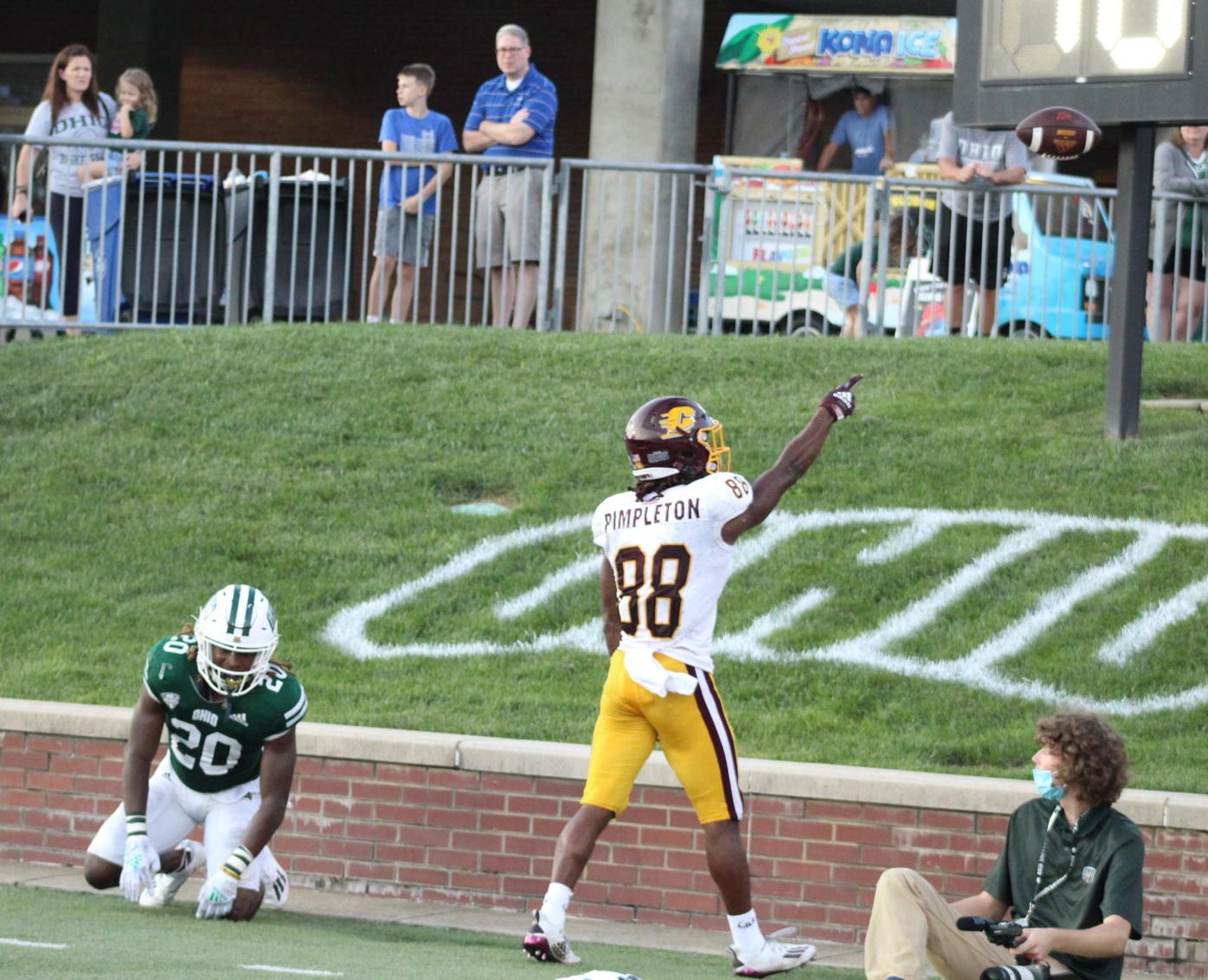 Central Michigan’s Kalil Pimpleton (88) tosses the football in the air after catching a 28-yard go-ahead touchdown in the fourth quarter on Saturday. Central Michigan rallied for a 30-27 victory. 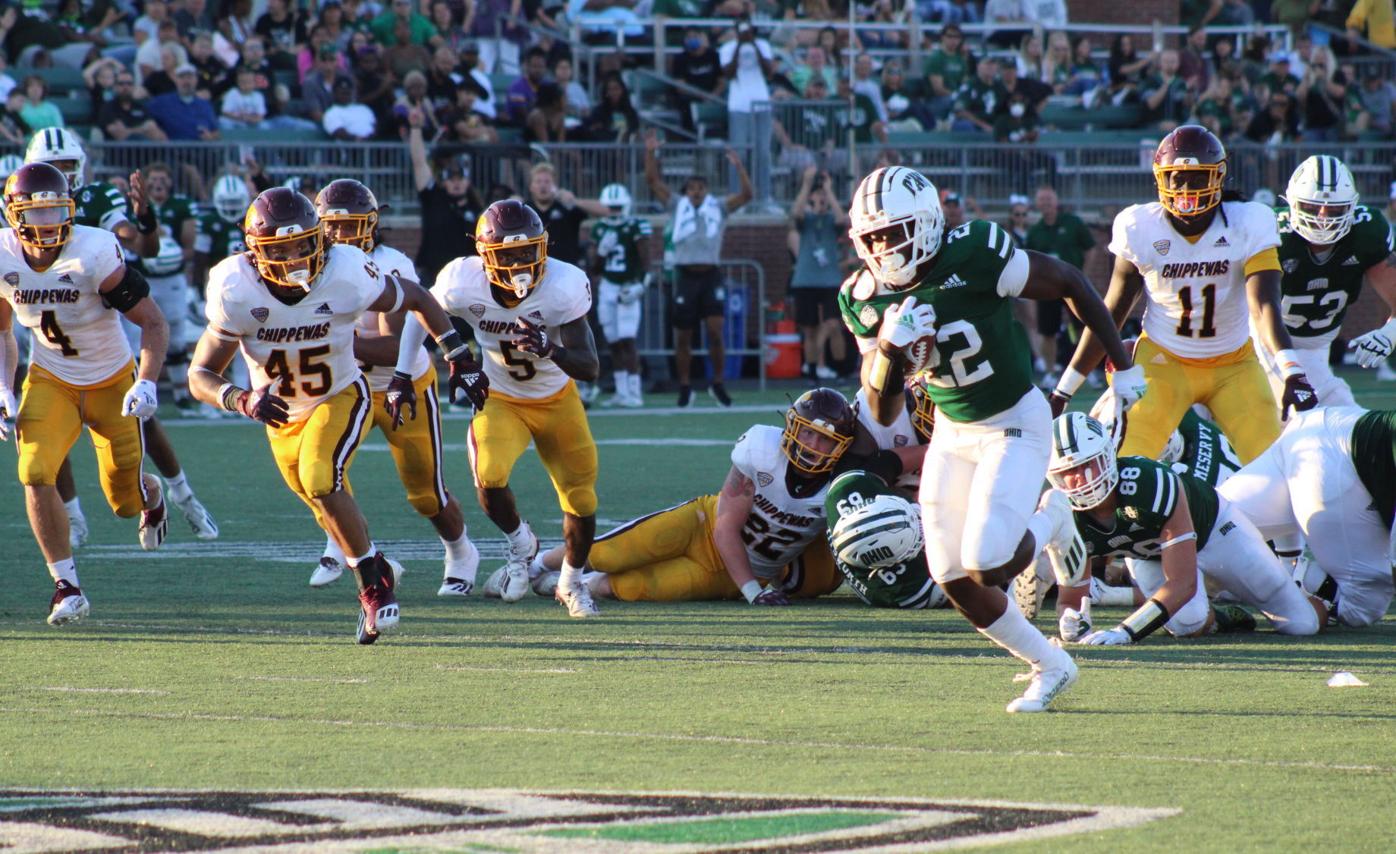 Ohio’s Sieh Bangura (22) breaks away for a 40-yard touchdown during the fourth quarter on Saturday.

Central Michigan’s Kalil Pimpleton (88) tosses the football in the air after catching a 28-yard go-ahead touchdown in the fourth quarter on Saturday. Central Michigan rallied for a 30-27 victory.

Ohio’s Sieh Bangura (22) breaks away for a 40-yard touchdown during the fourth quarter on Saturday.

Ohio had a festive Homecoming crowd on hand on a sunny day at Peden Stadium, and were potentially minutes away from another conference win.

Kalil Pimpleton and Central Michigan stole the show in the final stages.

Pimpleton hauled in a 28-yard touchdown pass from Daniel Richardson with 3:55 to play, rallying the Chippewas to a 30-27 win in front of 20,928 in Athens.

“Let me start out by saying, we are disappointed,” Ohio head coach Tim Albin said. “It was a great, beautiful day, and I thought our team again played their tails off. We just have to find a way to make a few more plays down the stretch. I could not be prouder of their effort and there were a lot of good things that came out of the adjustments at both sides of the ball at halftime.”

The Bobcats were on the verge of a breakthrough win in the conference after leading by a touchdown in the fourth quarter.

Ohio gained a first down on the next possession thanks to Armani Rogers’ 16-yard pass to Ryan Luehrman on third down, but ultimately had to punt the ball away.

Central Michigan started its winning drive on its own 17-yard line with 6:38 to play.

Ohio was called for a facemask penalty on the first play, and a 26-yard pass from Richardson to Dallas Dixon quickly advanced Central Michigan to Ohio’s 38-yard line.

Central Michigan would gain a first down to Ohio’s 28-yard line before taking two shots to the end zone.

The first attempt was incomplete, Ohio’s Roman Parodie breaking up a pass to the end zone to Dixon.

Richardson went toward the same spot in the back of the end zone on the next play, this time hitting Pimpleton in stride for a 28-yard score despite tight coverage.

Pimpleton pointed up into the corner bleachers at some of the Central Michigan fans who made the trip, the Chippewas regaining the lead with under four minutes to play.

“Well, you know, I think he knew that he needed to make some plays and he’s our guy, he’s the heart and soul of this football team,” Central Michigan coach Jim McElwain said of Pimpleton. “I tell you what I just love him. I thought he did a good, he stepped up and did some things well.”

Ohio was unable to gain a first down on what turned out to be its final possession.

Rogers attempted a pass to Isiah Cox on third-and-two from Central Michigan’s 33-yard line, bringing up a fourth-down situation.

Before Ohio could have a shot at going for it, the Bobcats’ sideline was called for a 15-yard unsportsmanlike penalty.

That pushed the Bobcats into a fourth-and-17 from their own 18, giving them no choice but to punt the ball.

Albin didn’t want to identify who the penalty was against, but did say they were planning on going for the fourth-down conversion before the flag was thrown.

“It is unfortunate and I am disappointed and so was that person,” Albin said. That is not who he is, and it is a teachable moment for our football team. I know that young man is hurting but we must get it corrected and make sure it does not happen again.”

The Bobcats didn’t get the ball back, as Central Michigan successfully ran the clock out.

The Bobcats were out of timeouts as Central Michigan snapped the ball one final time on a fourth down, running the final seconds off the clock.

It marked the sixth win in a row in the series for Central Michigan, which hasn’t lost in Athens since 2000.

Central Michigan gained 461 yards of total offense, led by Nichols. He carried the ball 30 times for 186 yards and a touchdown.

“I thought they created some push up front and Lew took advantage of it,” McElwain said. “You know we played with a little bit of tempo and that helped us a little bit in that second half as well.”

Rogers took every offensive snap for Ohio, completing 13 of 18 passes for 190 yards. He also rushed 15 times for 37 yards.

“I am very happy with Armani’s performance today,” Albin said.

Tariq Drake’s second interception of the game opened up the third quarter for Ohio, which took advantage of the field position.

The Bobcats drove 45 yards in just four plays, leading for the first time at 16-13 after De’Montre Tuggle’s 2-yard touchdown run.

The extra point missed however, but Ohio’s next drive ended when Stephen Johnson made a 44-yard field goal to lead 19-13.

The game continue to go back and forth. Pimpleton’s 7-yard touchdown run on a reverse gave Central Michigan a 20-19 lead with 1:05 left in the third.

A freshman gave the lead back to Ohio on a dramatic fourth-down conversion in the fourth.

Facing fourth-and-one from the Central Michigan 40-yard line, Sieh Bangura got his first career carry after O’Shaan Allison was forced to leave the game with an injury.

It appeared Bangura would be stopped around the line of scrimmage, but he broke free from the defense and was off to the races.

“I am not surprised at all; he’s the guy,” Albin said. “There is some really talented younger players that are getting a lot of playing time at this point of the season. Again, I was not surprised, and we knew he was going to play. Coach (Tyler) Tettleton did a great job there.”

Cox completed a trick play with a pass to Adam Luehrman on the 2-point conversion for the 27-20 lead.

The Bobcats had the momentum, but the Central Michigan kept chipping away.

“It does a lot for this team,” Pimpleton said. “Coming off of the loss last weekend (against Miami), we beat ourselves and going forward this season I think I think every game is important. Facing and overcoming adversity to win this one by sticking together and bringing our own energy meant a lot.”

The Bobcats are back on the road this week, going to Buffalo on Saturday for a 12 p.m. kickoff.

“Our league top to bottom is the most competitive it has been since my time here,” Albin said. “Every game is going to come down to what you saw today. Next week is going to be like today and we must find a way to get it done.”