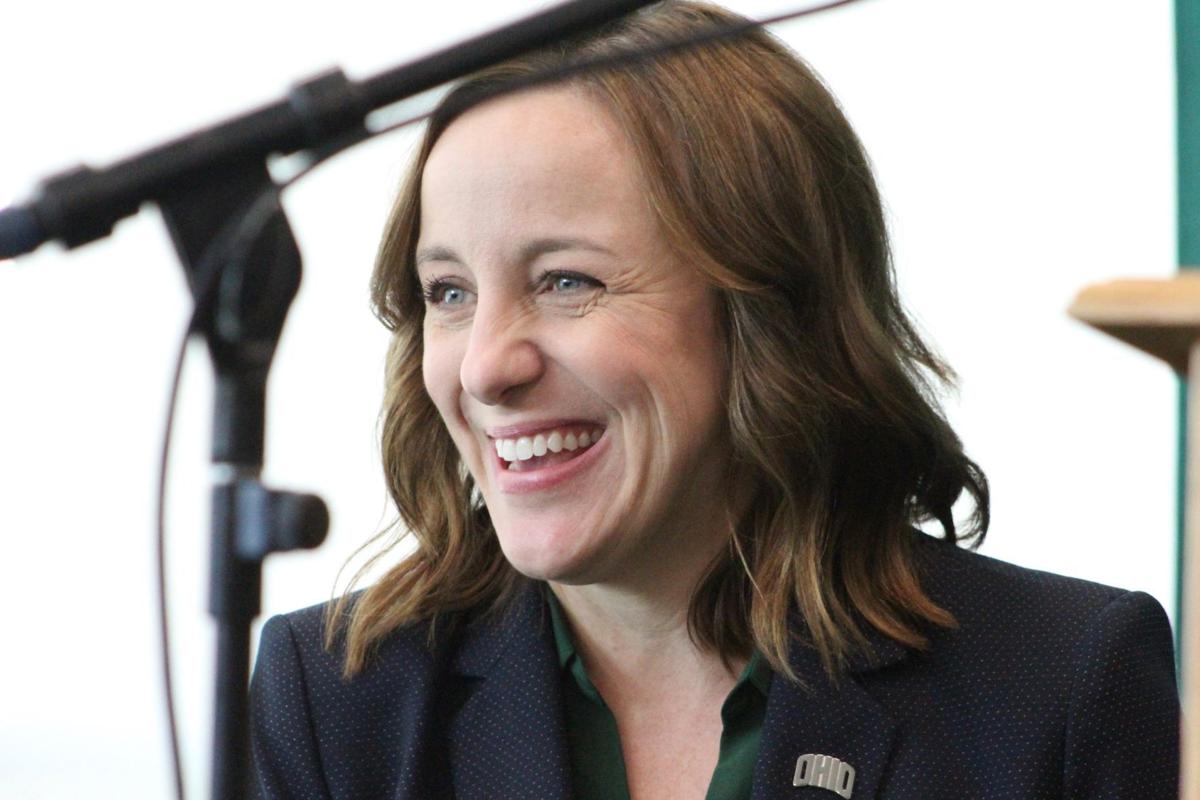 Julie Cromer was announced as the next Director of Athletics at Ohio University, and took part in an introductory press conference on Friday morning inside the Sook Center at Peden Stadium. 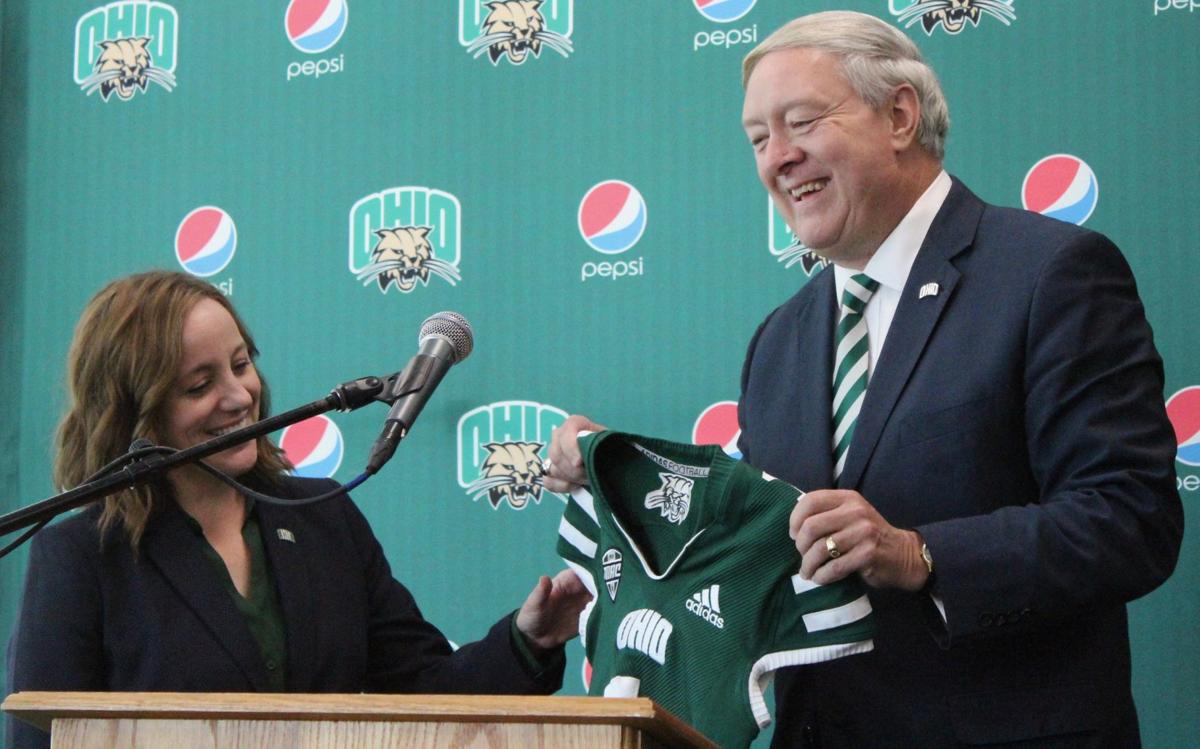 Julie Cromer was announced as the next Director of Athletics at Ohio University, and took part in an introductory press conference on Friday morning inside the Sook Center at Peden Stadium.

Note: This story appears in the Sunday, Aug. 18 newspaper on Page B1.

Specific details were in short supply, but truth be told they almost always are at these type of proceedings.

No, Julie Cromer didn’t outline a 12-point plan for what she hopes to accomplish or create with Ohio Athletics on Friday morning. This — a hour-long press conference inside the Sook Academic Center tucked away at the north end of Peden Stadium — was about telling her new community what she’s about, what she believes in and how she’ll go about leading the Bobcat athletic department and all its student-athletes.

“I am here today because I believe in the transformative power of higher education and in the leadership lessons provided through sport,” Cromer said. “Sports are embedded in the connective tissue of our communities.

“There is absolutely no other enterprise like college sports, and I am blessed to be a part of it.”

Cromer was picked by Ohio University President M. Duane Nellis to lead Ohio’s athletic department after a two-month search. Her wealth of experience — at Wright State, at the NCAA itself, at Indiana and most recently at the University of Arkansas — set her apart from the rest, he said. Echoing a now common refrain from Ohio administration, Nellis said Cromer was the best candidate available to “focus for ways in which athletics can serve as the front porch of our university.”

“Given her extensive experience across the athletics landscape, I truly believe Julie is the right leader to help build on the last decade of success at Ohio University,” Nellis added.

Details about a potential contract were not released on Friday. Cromer’s predecessor at Ohio, Jim Schaus, left for the Southern Conference with two years left on a contract that paid him a base guarantee of $275,500 annually.

As for developing that ‘front porch,’ Cromer said those plans will come in time. She won’t officially start at Ohio until Aug. 31. And once on board she’ll need a period of time to integrate and learn as much as possible about her new surroundings. Cromer said she’ll kick off a “100-day plan” on the same day the football Bobcats kick off the 2019 season.

Cromer cited Ohio’s academic reputation, its “rich, inclusive history” and the opportunities and potential of the department to grow and connect locally as strong draws. But she said it was conversations with current Ohio athletes that clinched her belief that this was the right job to pursue.

Cromer spoke to the student-athletes in attendance during the press conference to reiterate that fact.

“I will tell you that I was most impacted by my meeting with our student-athletes. They love this university,” Cromer said. “So, while there were many factors that drew me to Athens and Ohio University, let me say that meeting with you and talking with you last week was a particularly compelling component to that.”

When asked about the challenges in transitioning from Arkansas — and its $130 million in revenue — to Ohio ($33 million), Cromer instead talked about the similarities instead.

“The scale is different. I understand that,” she said. “But I think resources are a challenge everywhere you go.

“Everything is relative to where you are and who you are competing against. I like our position within the Mid-American Conference. I think the opportunity to scale to this type of environment is coming at a perfect time for me in my career.”

Cromer often spoke like someone who has spent the last 20 years working in the upper reaches of college athletics. Her resume backs up that point.

But she also spoke earnestly about her desire to build that ‘connective tissue’ between athletics and the surrounding campus and community.

That belief came through toward the end when she was asked what it felt like to become the first full-time woman athletic director in Ohio history. Nellis presented her with a No. 1 Ohio football jersey to drive home the fact that Cromer will be a trailblazer at the first college established in the Northwest Territory.

At Indiana, she had already become one of the first women to oversee a football program in the Big Ten Conference. At Ohio, she understands she is again breaking new ground.

“I do recognize the historical significance for us here at this university,” Cromer said, referring also to her husband Will Peoples. “I hope that gives us an opportunity to tell our story.

“This university has a rich culture of inclusion,” she continued. It’s one of the reasons Will and I were drawn to the community. I am not the first — ‘first’ — on this campus and I am well aware of that.”

Cromer didn’t spell out a master plan. But she was capable, smart and savvy. She’s the first woman athletic director in Ohio history, but she’s not unique. She’s in Athens to help the department become better than it was before, and she has the experience to make that happen.

The details will be filled in later. But on this morning it was enough for Cromer to give voice to her place on campus and what it means for those who come after.

“There are a lot of very talented women who have worked in college athletics for a very long time. The fact that I have the opportunity to stand here at the podium here today, is because of them,” Cromer said. “Many of them would have been terrific athletic directors, and they either had the opportunity, or didn’t, or made other choices.

“I am not a unicorn. I am a member of an army, and we seek to lead all of college athletics for all of our student-athletes, not just our young women.”

“I am not a unicorn. I am a member of an army, and we seek to lead all of college athletics for all of our student-athletes, not just our young women." — Julie Cromer, Ohio University Director of Athletics