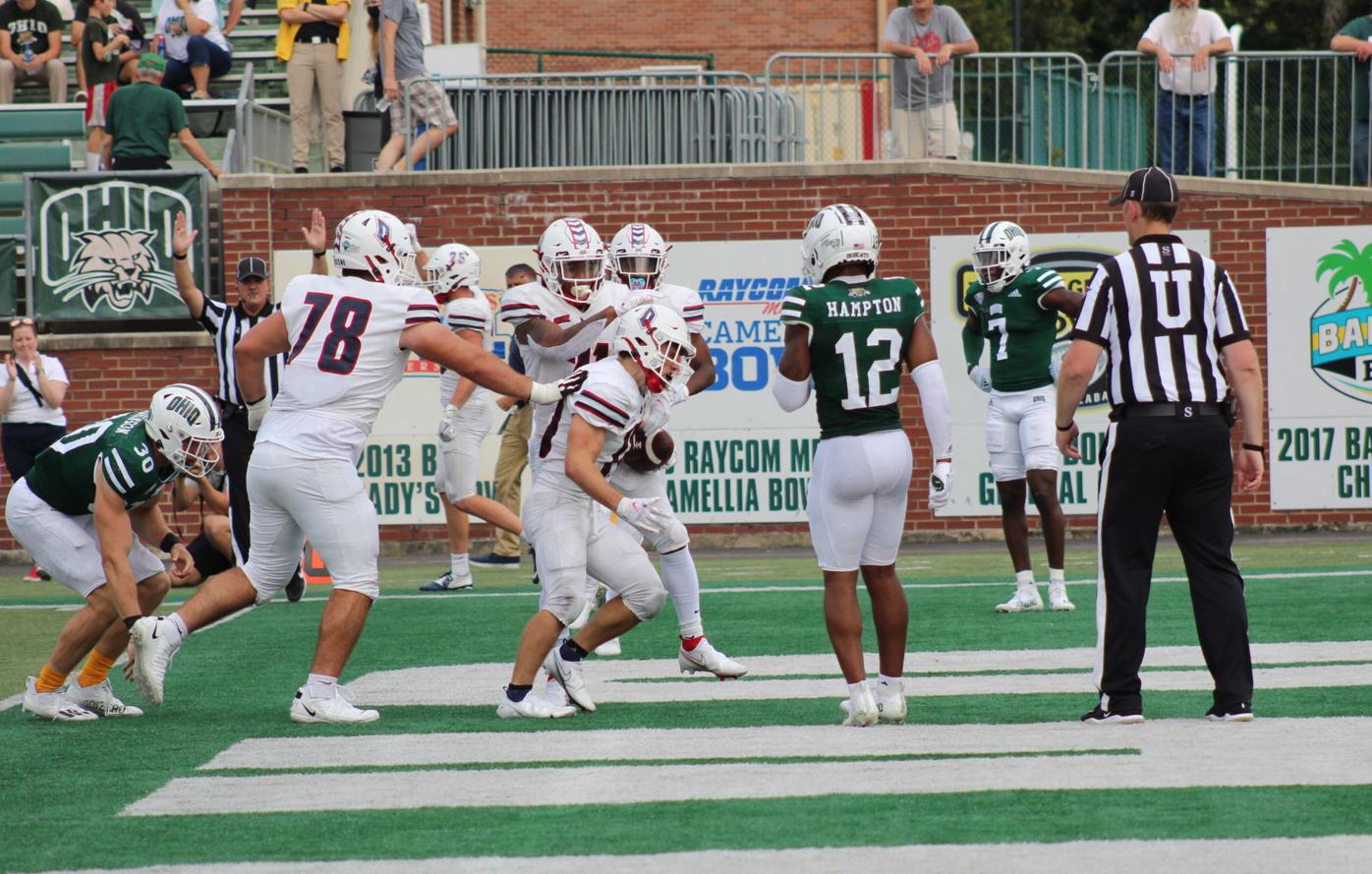 Duquesne’s Joey Isabella (center) celebrates after catching a 3-yard touchdown against Ohio on Saturday. The Dukes upset the Bobcats, 28-26. 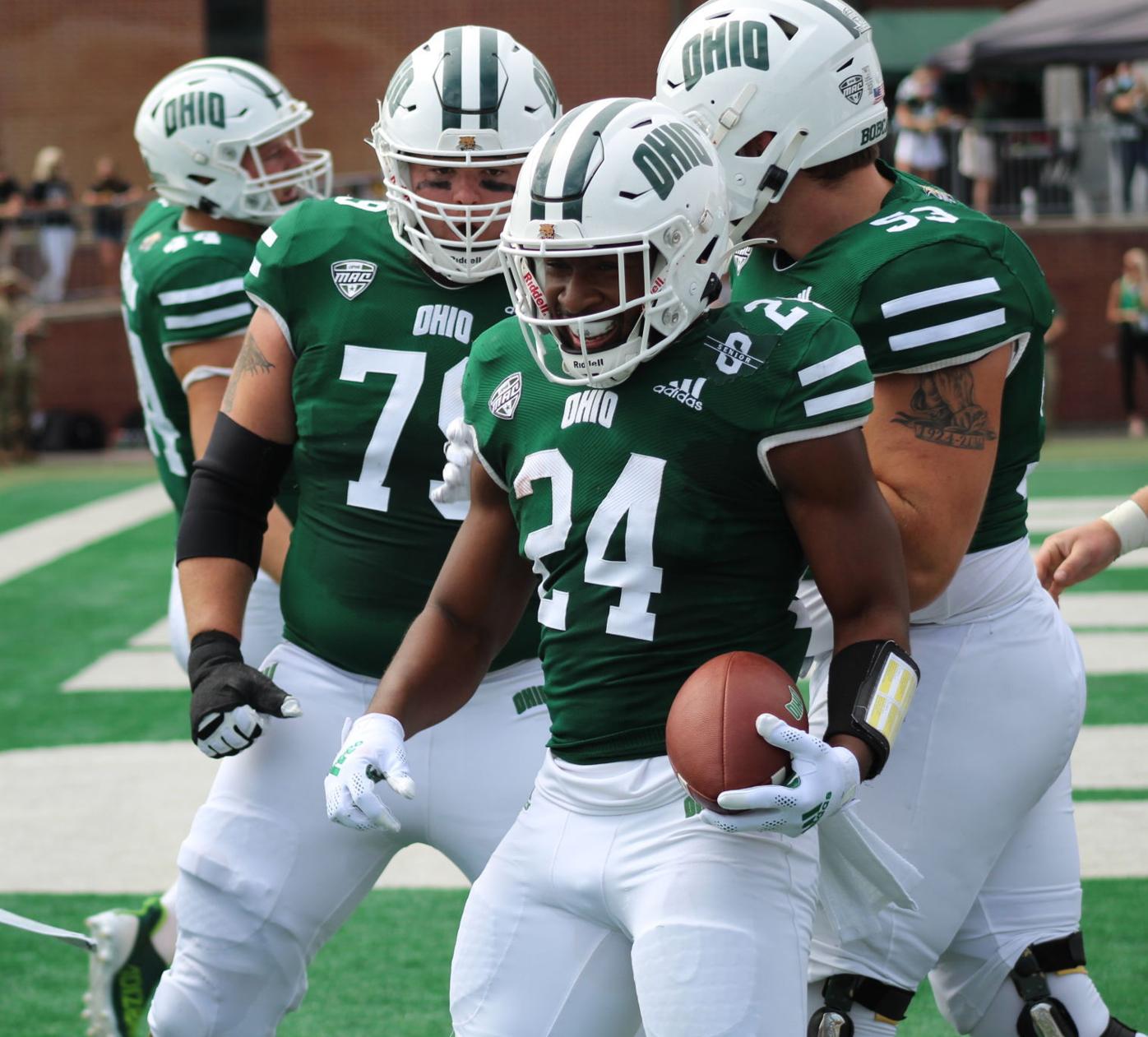 Duquesne’s Joey Isabella (center) celebrates after catching a 3-yard touchdown against Ohio on Saturday. The Dukes upset the Bobcats, 28-26.

De’Montre Tuggle scooped up the opening kickoff and raced 83 yards to the end zone.

Ohio’s Saturday non-league game against Duquesne was only 13 seconds old, but it appeared the Bobcats would be enjoying a big day against an FCS foe.

Duquesne had other plans, however.

In a shocking result, the Dukes came into Peden Stadium and upset Ohio 28-26 in front of 19,411 fans on a sunny Athens day.

Duquesne (1-1) dominated a number of key statistics. It had 26 first downs, running 79 offensive plays compared to 46 for Ohio.

The Dukes also possessed the football for 41 minutes and 2 seconds, with Ohio holding the ball for just 18 minutes and 58 seconds.

Even with those disparities, Ohio came a play away from forcing overtime.

Trailing 28-20 after a 27-yard field goal by Brian Bruzdewicz with 2:46 let, the Bobcats pieced together a two-minute drive that nearly saved the game.

Facing a fourth-and-four from their own 39, Ohio quarterback Kurtis Rourke found Ryan Luehrman for a 14-yard gain to keep the game alive.

An 11-yard pass from Rourke to Chase Cokley gave Ohio a fresh set of downs at the Dukes’ 16-yard line. Another 11-yard pass followed, this time to O’Shaan Allison, and Ohio was in business, down to the 5-yard line.

Ohio would eventually see a first-and-goal from the 3-yard line, and Rourke spotted Ty Walton for the touchdown. With nine seconds left, Ohio pulled to within 28-26.

The Bobcats went for the 2-point try, but the Dukes were able to knock down a fade to Luehrman in the end zone.

Duquesne recovered the onside kick, clinching one of the biggest wins in program history.

“We had this opportunity to come in today and the kids played their butts off and did a great job to win this game. It is an outstanding feeling, but I never imagined that’s where we would be,” Duquesne coach Jerry Schmitt said in regards to beating an FBS team.

Duquesne quarterback Darius Perrantes got his first career start, completing 23 of 34 passes for 194 yards and a touchdown.

“Coming into this game, I knew we could win,” he said. “We just had to believe in ourselves and believe in our coaching, to do everything we’ve been doing all week. I knew we were going to get it done.”

Duquesne’s running combination of Garrett Owens and Billy Lucas got the job done. Owens had 23 carries for 82 yards, while Lucas added 77 yards on 14 carries.

Penalties also played a large role in the outcome, with Ohio being guilty of 12 for 112 yards. The Dukes picked up seven first downs on Ohio penalties, many keeping second-half drives alive.

The Bobcats enjoyed a good start. Tuggle’s 83-yard kickoff return staked them to a 6-0 lead — the extra point was wide right — and the offense needed only two plays to score on the next drive.

“I mean it would have been more excited if we did win, but at the end of the day getting (1,000 yards) in college is always a blessing,” Odom said. “I definitely appreciate everything I’ve done here and the stuff that I’m going to continue to do but at the same time, the team is more important than just my individual stats.”

Tuggle scored on a 15-yard run on an option pitch around left tackle, allowing Ohio to lead 13-3 in the first quarter.

A momentum swing appeared to occur at the end of the first quarter. Duquesne punter Michael Berarducci booted a 49-yard kick that was downed at the 1-yard line.

Allison was tackled behind the line of scrimmage on the first play for a safety, allowing the Dukes to cut Ohio’s lead to 13-8 on the final play of the first quarter.

It’s the second game in a row Ohio’s offense gave up a safety after being pinned deep in its own territory.

Another momentum swing came when Ohio failed to get points on a second-quarter drive that advanced to the Dukes’ 8-yard line.

Ohio lined up for a field goal on fourth-and-eight, and attempted a fake field goal.

However, a delay of game penalty blew the play dead, and the opportunity for trickery was gone. Stephen Johnson then missed a 30-yard field goal, and the Bobcats came away empty handed.

Bruzdewicz kicked a 21-yard field goal to trim Ohio’s lead to 13-11 at halftime.

The Dukes had three time-consuming drives in the second half, getting points on all of them and putting Ohio’s back against the wall.

The first drive was a 10-play, 75-yard march that took 5 minutes and 13 seconds off the clock. It ended on Perrantes’ 1-yard sneak on fourth-and-goal to give Duquesne an 18-13 lead.

The Bobcats couldn’t get the stop it needed on the next possession. The Dukes drove 66 yards in 15 plays, taking another 7 minutes and 59 seconds off the clock. It was 28-20 after Bruzdewicz’s field goal.

The Dukes benefitted from a pass interference and an Ohio offsides penalty, both leading to first downs in third-down situations.

Perrantes also connected with Cyrus Holder on a 16-yard pass on third-and-15, and a roughing-the-passer penalty gave Duquesne another new set of downs later in the drive.

Rourke completed 14 of 22 passes for Ohio for 168 yards and a touchdown. Allison gained 76 yards on 12 carries, with Tuggle gaining 44 yards on seven carries.

The Bobcats have a quick turnaround. They’ll travel to Louisiana on Thursday to face the Ragin Cajuns before going to Northwestern on Sept. 25.

Saturday was a tough day for the Bobcats, but Odom said the only thing they can do now is look forward to the next game.