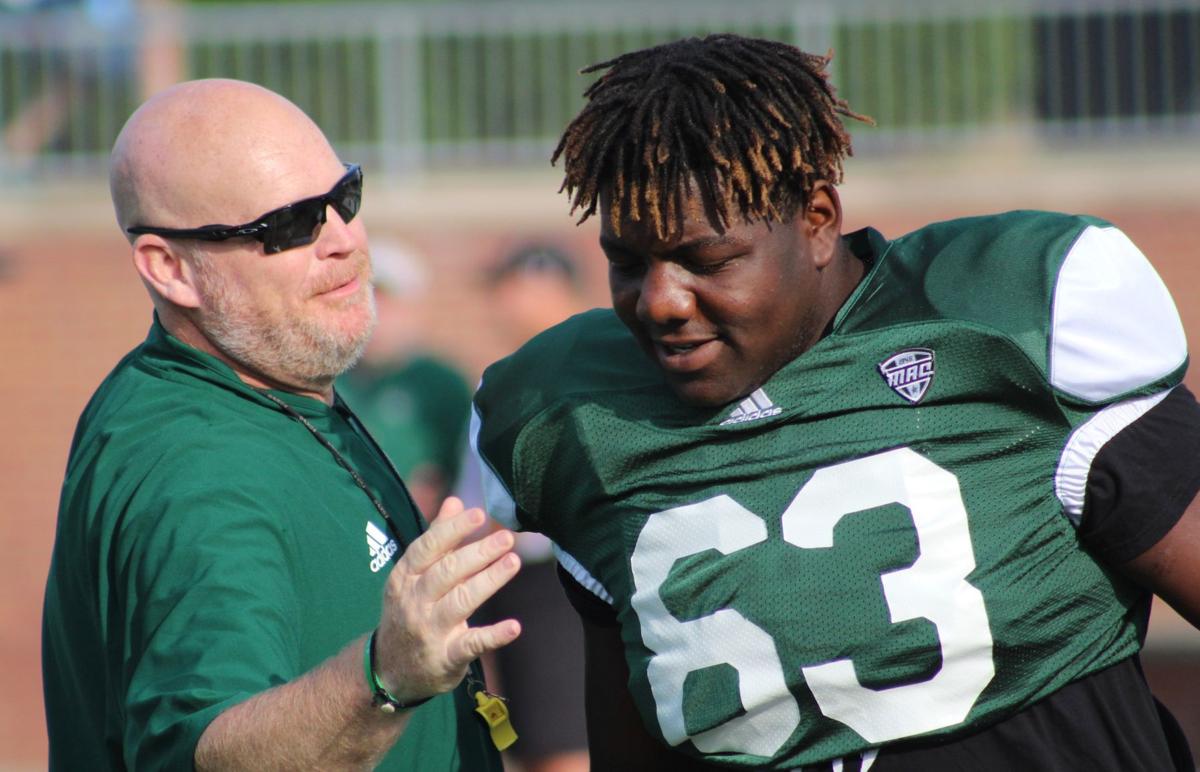 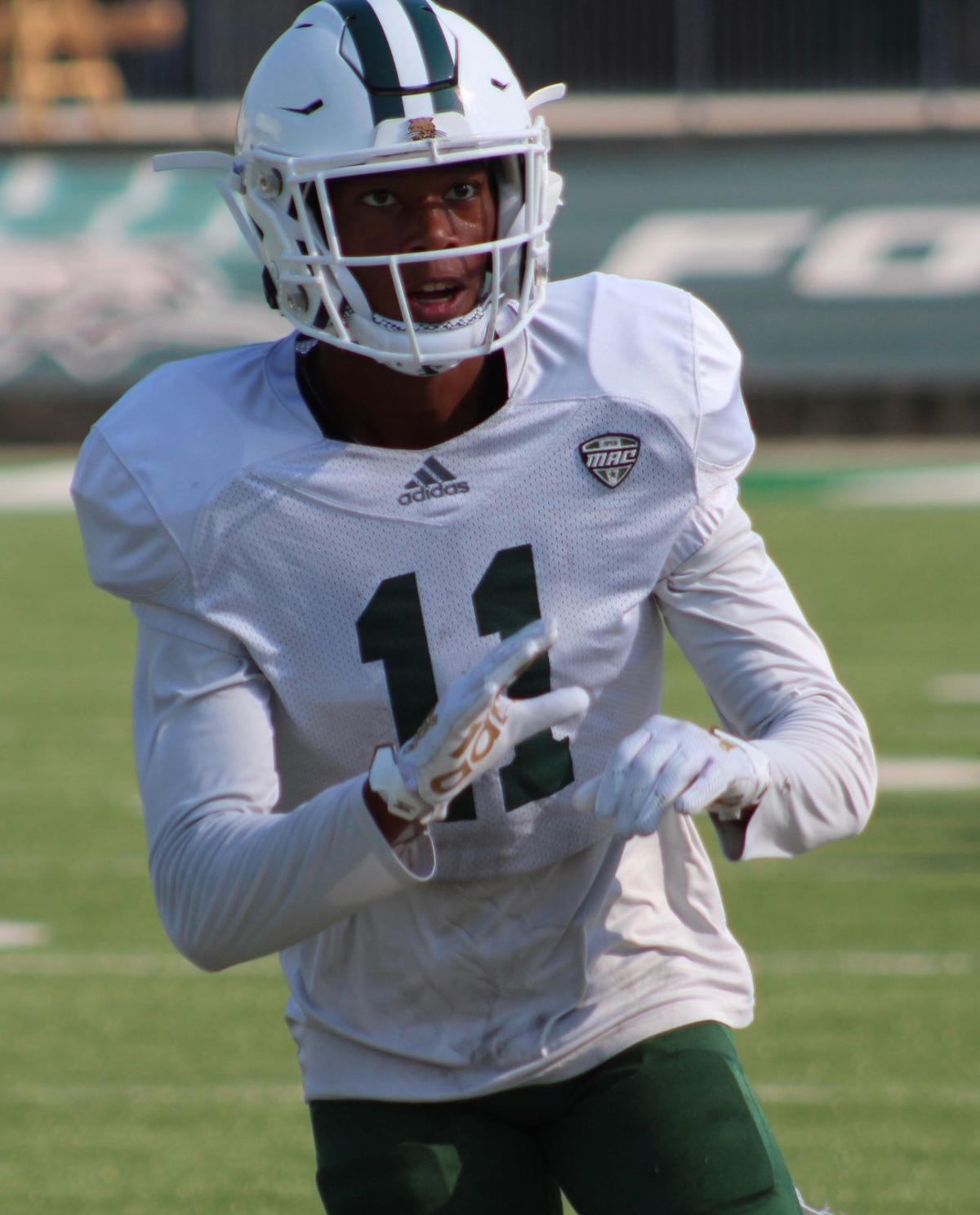 Ohio sophomore cornerback Tariq Drake came up with an interception during the Bobcats’ second fall camp scrimmage on Saturday, Aug. 17, 2019 inside Peden Stadium.

Ohio sophomore cornerback Tariq Drake came up with an interception during the Bobcats’ second fall camp scrimmage on Saturday, Aug. 17, 2019 inside Peden Stadium.

Note: This story appears in the Sunday, Aug. 18 newspaper on Page B1.

At some point, a grumpy, unhappy Frank Solich was going to emerge during the Bobcats’ training camp.

It was Ohio’s offense that drew Solich’s ire, and with good reason. The Bobcats ran roughly 75 game-speed plays on Saturday, and packed a few days worth of mistakes into the first third.

“Offensively, the start of the scrimmage was poor to pitiful. And it didn’t get much better as it went on,” Solich, still bubbling near his boiling point, said afterward.

Here’s a list of what went wrong in just the first 18 snaps:

— QB Kurtis Rourke fumbled a handoff on the first play from scrimmage. On the second snap, Rourke was sacked (no tackle) for a seven-yard loss when outside linebacker Jack McCrory wasn’t accounted for.

— Later in the first set of 10 plays, the offense turned the ball over thanks to a shotgun snap that went nowhere.

— QB Nathan Rourke had perhaps his ‘worst’ practice of fall camp. Over a span of five plays, he was sacked once — thanks to good coverage — sailed a throw high down the middle for an interception, and then took a five-yard loss on a busted play/miscommunication in the backfield.

— Ohio had two offensive penalties — and five offensive flags throughout — and Nathan Rourke missed a pair of open receivers on throws.

After a fairly sharp scrimmage seven days ago, the offensive Bobcats were low-energy, unfocused, and too sloppy in a lot of areas.

“What caused it all to all of a sudden come together like that in a negative way, I’m not sure,” Solich said. “Part of it is probably preparation mentally. They’re a little bit tired, but so is the defense.

“You got to play through being tired anyway. Part of what we’re all about is no excuses.”

Nathan Rourke was limited to just 15 plays, and he finished 5 of 9 passing for 87 yards, and lost six yards on two sacks.

Sophomore CB Tariq Drake had the interception off Rourke, when his throw to slot receiver Jerome Buckner simply sailed too long

“We had a great performance today,” said Drake, who saw plenty of time as Ohio played without three of its top corners in Marlin Brooks and both Ilyaas and Xavior Motley.

“We came out with a little something to prove. Last week the offense did a very good job of moving the ball on us and got a couple touchdowns.”

The offense was held to just 4 of 11 conversions on third down, and three times faced third downs of 22 yards or longer.

“We did a lot of things you can’t live with,” Solich said.

“Today we would’ve had to have win a football game with defense and special teams. The offense made enough mistakes to lose a couple games.”

Besides the play of the defense, there were a few other positives. Both Kurtis Rourke and redshirt freshman QB Joe Mischler were accurate with the football, even if avoiding negative plays in other aspects was an issue. Kurtis Rourke finished 8 of 8 passing for 82 yards, and threw the lone touchdown — an eight-yard slant to D.L. Knock. Mischler was 10 of 15 for 128 yards through the air.

Knock had two catches for a team-high 50 yards, including a 42-yard reception down the right sideline from Mischler.

“It is a little frustrating to come out the way we did last week and come out this week, but as an offense we know each week we can come out a lot better than we did today,” Knock said.

Running back Julian Ross saw his first live action in camp as well. His speed shined when he took a swing pass 56 yards after breaking free to the sideline. Ross had just three touches, and redshirt freshman O’Shaan Allison had just two.

Instead it was walk-on Ja’Varhi Portis (eight carries, 38 yards), walk-on Jonathan Barna (11-33) and junior college transfer De’Montre Tuggle (5-25) who had the bulk of the work in the ground game.

“It’s good to get Julian back. I think he’s still working on recovering fully so we gave him limited reps,” Solich said. “He’ll be excellent.”

Ohio opens the season on Aug. 31 with a 2 p.m. home game against Rhode Island. The Bobcats have one week of fall camp remaining, and one regular game week before the opener.

At this point, Solich isn’t sure if his team will have another full-contact scrimmage before the opener. Like the first scrimmage in camp, there appeared to be few — if any — serious injuries on Saturday. Minter limped off the field at one point, and defensive end Bryce Dugan was limping with an ankle injury. Walk-on linebacker Griffin Hites had to be helped off the field with a leg injury.

The Ohio coaching staff is trying to balance getting the regulars ready to go, while developing the younger talent on the roster. For example, on Saturday Ohio didn’t expose any of its starting linebackers or starting tandem of safeties to live-speed play.

“You hate to do that. But in this game you got to protect the proven players, you got to make sure they’re ready to go when the season opens,” Solich explained.

“Generally we have been. But you got to protect some of those guys and you have to get your young guys more reps to get them ready to go.”