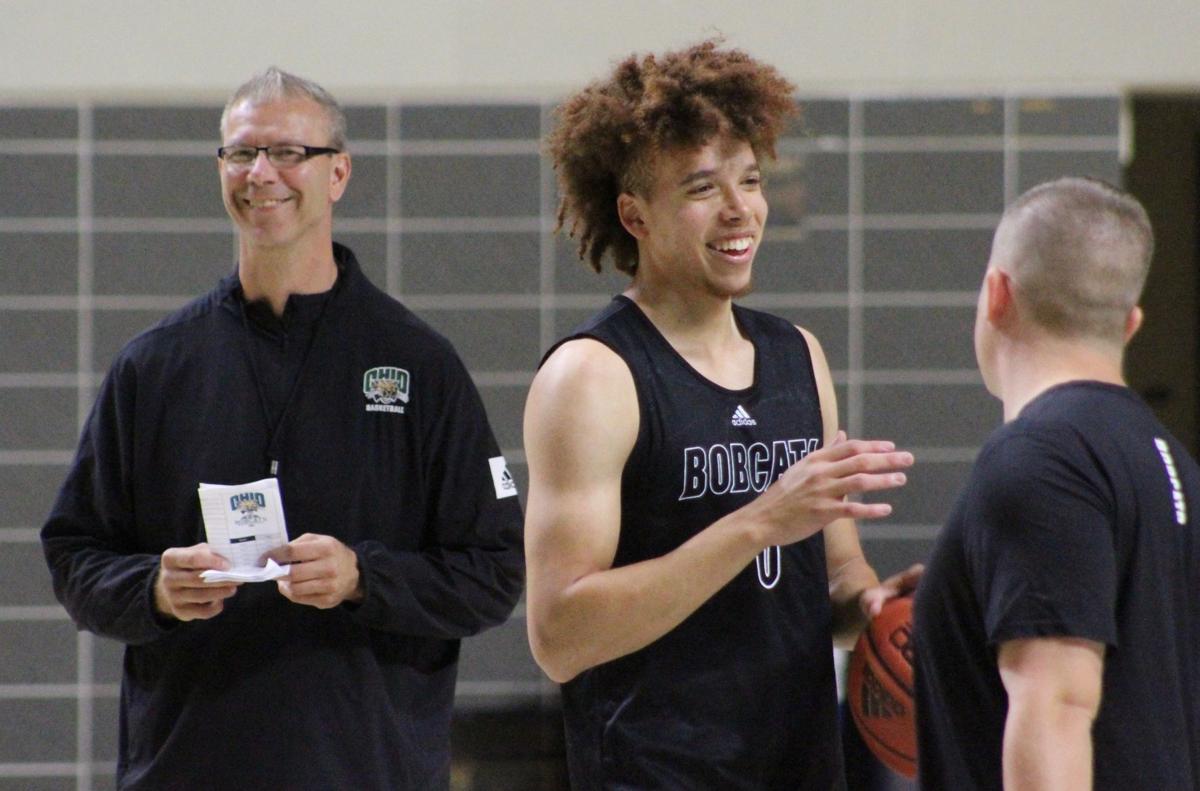 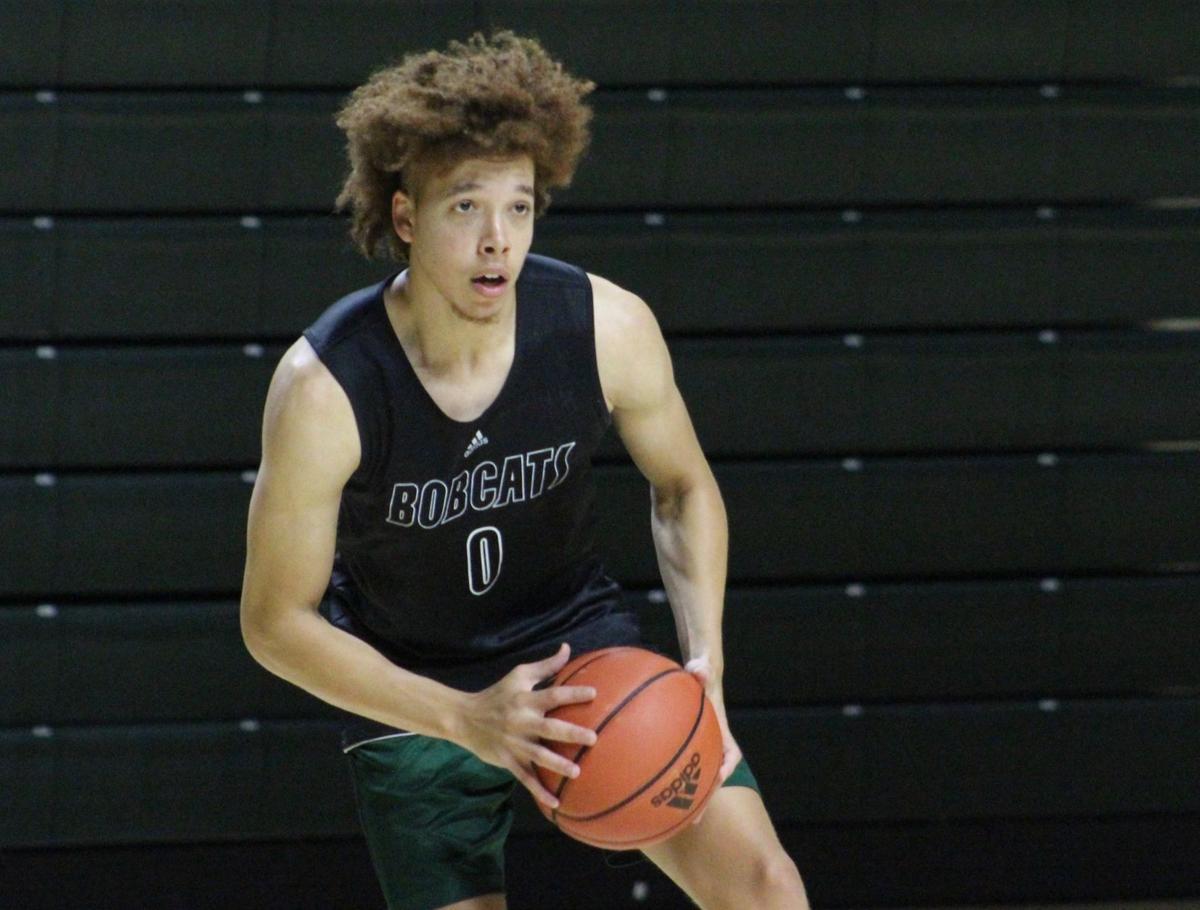 Ohio sophomore forward Jay Preston, seen here during preseason practice in October 2019, is a returning starter for the Bobcats and was a member of the 2019 All-MAC Freshman Team last spring.

Ohio sophomore forward Jay Preston, seen here during preseason practice in October 2019, is a returning starter for the Bobcats and was a member of the 2019 All-MAC Freshman Team last spring.

Note: This story appears in the Wednesday, Oct. 30 newspaper on Page A6.

A year ago at this time virtually no one in Athens, or around the Mid-American Conference — outside the confines of the Bobcats’ men’s basketball program — knew who Jay Preston was or what kind of role he’d play at Ohio.

A lot can change in 12 months. Preston is now one of the ‘sure’ things for the Bobcats as the 2019-20 season dawns. The barely-recruited point guard is a returning starter and the unquestioned on-the-court leader for Jeff Boals’ first team back with his alma mater.

The Bobcats have seven freshmen on the roster, an entirely new coaching staff and perhaps the lowest external exceptions for a season in the history of the program. But they also have Preston, a high-upside star in the making.

Preston had virtually no recruiting profile after his school career in Orlando, Fla. He was recruited to Ohio after a season spent at Believe Sports Academy in Athens, Tenn.

The lanky, big-haired freshmen quickly made an impression last season for his ability to find open teammates and to convert awkward-looking runners and leaners. Preston was a big part of the rotation at the season’s start, and a part of the starting line up when conference play began.

In a season marred by injuries, a second-consecutive losing record, and an expected coaching change that took affect at the end of the year, Preston was a beacon for the future.

Preston appeared in 30 games, and made 22 starts while playing 29.5 minutes a game. He averaged 6.0 points per game and shot just 43.4 percent overall — 20.8 percent from 3-point range — but was a difference-maker with his passing. Preston led Ohio with 3.4 assists per game, and was among the MAC leaders with a 2.8 assist-to-turnover ratio. He was named to the MAC’s All-Freshman Team.

If there was any doubt about if Preston could play at this level, it evaporated. Simply put, the Bobcats were better when he was the floor.

“I built confidence that has carried me into next year,” Preston said. “I’m just trying to be as aggressive as possible all the time. Always be on the attack and I’ll see where that takes me.”

That approach was evident early in the off season. Boals was hired in March. Suddenly Preston saw his biggest advocates in the program — the coaches who brought him in and believed in him — leave Athens. Teammates left, or were asked to leave, the program. It was up to Preston to win over his spot in the Bobcats’ future once more.

Preston said it wasn’t difficult to do so.

“It’s a business and I understand that. But the new coaches have brought nothing but love and energy to the table,” he said.

And Preston has quickly won over Boals. With Ohio tipping off the season in a week, there’s no doubt who is running the team on the floor. Preston will be the starting point guard, and will be dictating the flow and approach of the Bobcats offensively.

Ohio is still searching for a second point guard — freshman Miles Brown has missed all of preseason practice with a knee injury — but everyone knows it’s Preston who will be running the show.

Boals said the sophomore has earned it. In the endless charting of results from preseason practice, Preston has been the Bobcats’ ‘best’ player. When everything — deflections, taking charges, diving for loose balls, turnovers, shooting, assists — is tallied it’s clear Preston is at the top of the list.

“We do a points system for our practices,” Boals explained. “He’s, far and away, No. 1 on that list.”

Preston is growing — literally and figuratively — in the role of team leader. He gained a ton of confidence last season. He’s learned what his new coach wants out of a point guard. And he’s, well, grown. Preston is an inch taller than a year ago — now 6-4 — and has added around 20 pounds to a frame (188 pounds) that took a beating last season.

And with seven freshmen that will have to play, Preston will tap into last year’s experience to help the new guys acclimate to what’s in store.

“Lead by example. Show the new freshmen how things are done,” he said. “Don’t be too much of a dictator. Still have fun with it.”

And when it comes to point guards, you won’t find any Bobcats who say Preston is anything but a joy to play with.

Nolan Foster understands that he’s a true freshman, and that there is plenty he doesn’t know when it comes to Division I men’s basketball. But ask him about Preston, and he smiles like a old guru who has figured out the meaning to life.

“It’s still something I’m getting used to, where I have to be ready for the ball at all times,” said Foster, a 6-foot-10 center.

“All you have to do is catch the ball and finish. He can always find the open guy and get somebody open shots,” he added. “You always got to be paying attention.”

Nate Springs, a 6-10 redshirt freshmen, got used to it a year ago. His message is simple. Keep running, keep moving, because Preston will find you.

“His ability to see the floor is crazy,” Springs said. “You’ll get a pass from (Preston) and you’ll score, and you’ll be like ‘I need that pass again.’

“You like playing with him because he moves the ball, he knows what he’s doing and he plays with a pace that is easy to run with.”

Preston has plenty to improve on, and isn’t a finished product — not by a long shot. He needs to shoot better from range, and Boals would like to see him become even more aggressive in looking for his own offense.

But if you want a reason to believe 2019-20 will be better than the last two seasons, look no further than No. 0.

“He’s gained 20 pounds of muscle. Playing with a lot of confidence right now,” Boals said. “He’s going to have the ball in his hands a lot. His decision making is pretty good.

“But his vision is going to get other people a lot of easy shots. He’s been phenomenal.”

“I know what I’m capable of, a lot of people know that now too,” he said. “The numbers and that stuff will speak for itself.

“I just need to be much more aggressive this year,” he added. “I want to win a MAC Championship and I’m going to do whatever it takes to get us there.”