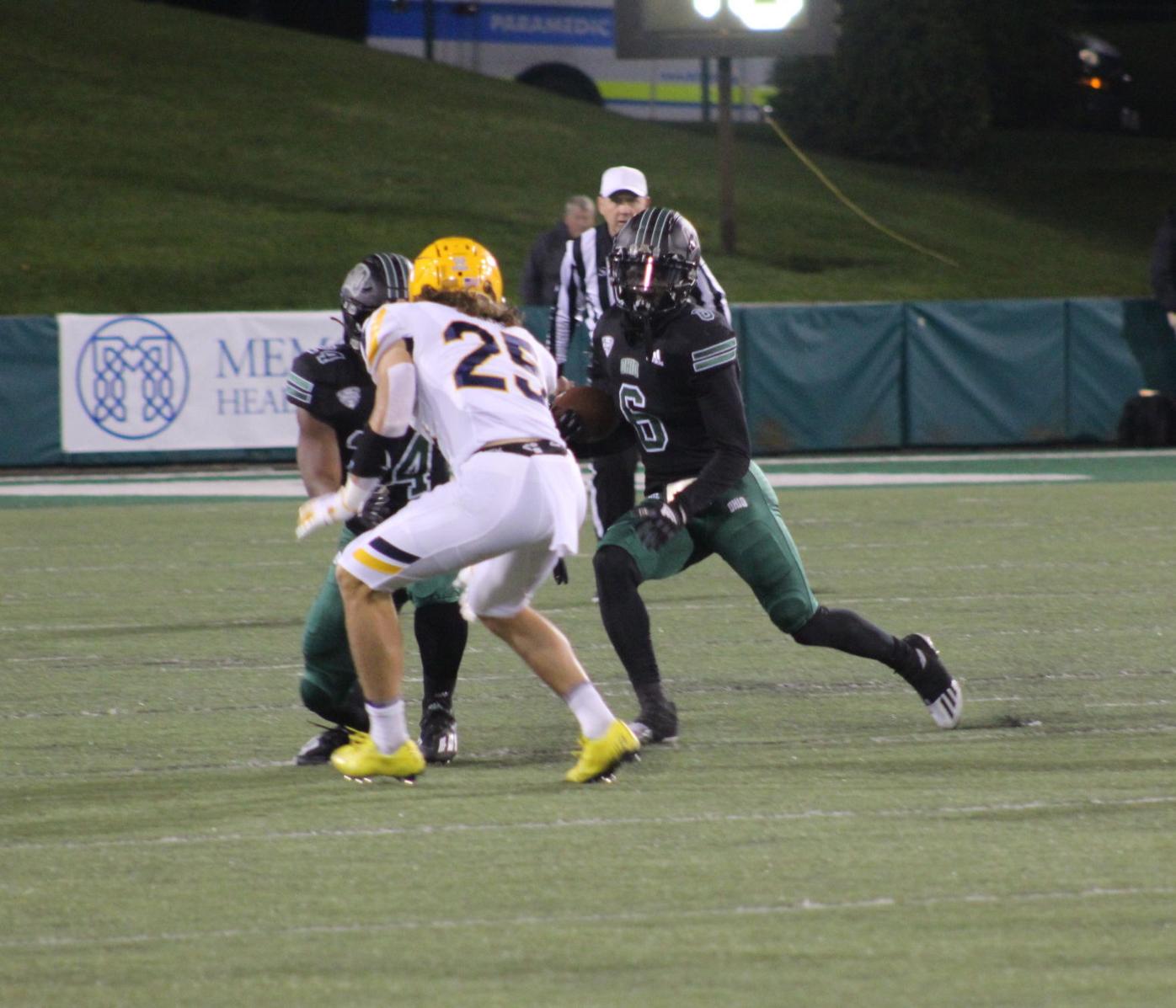 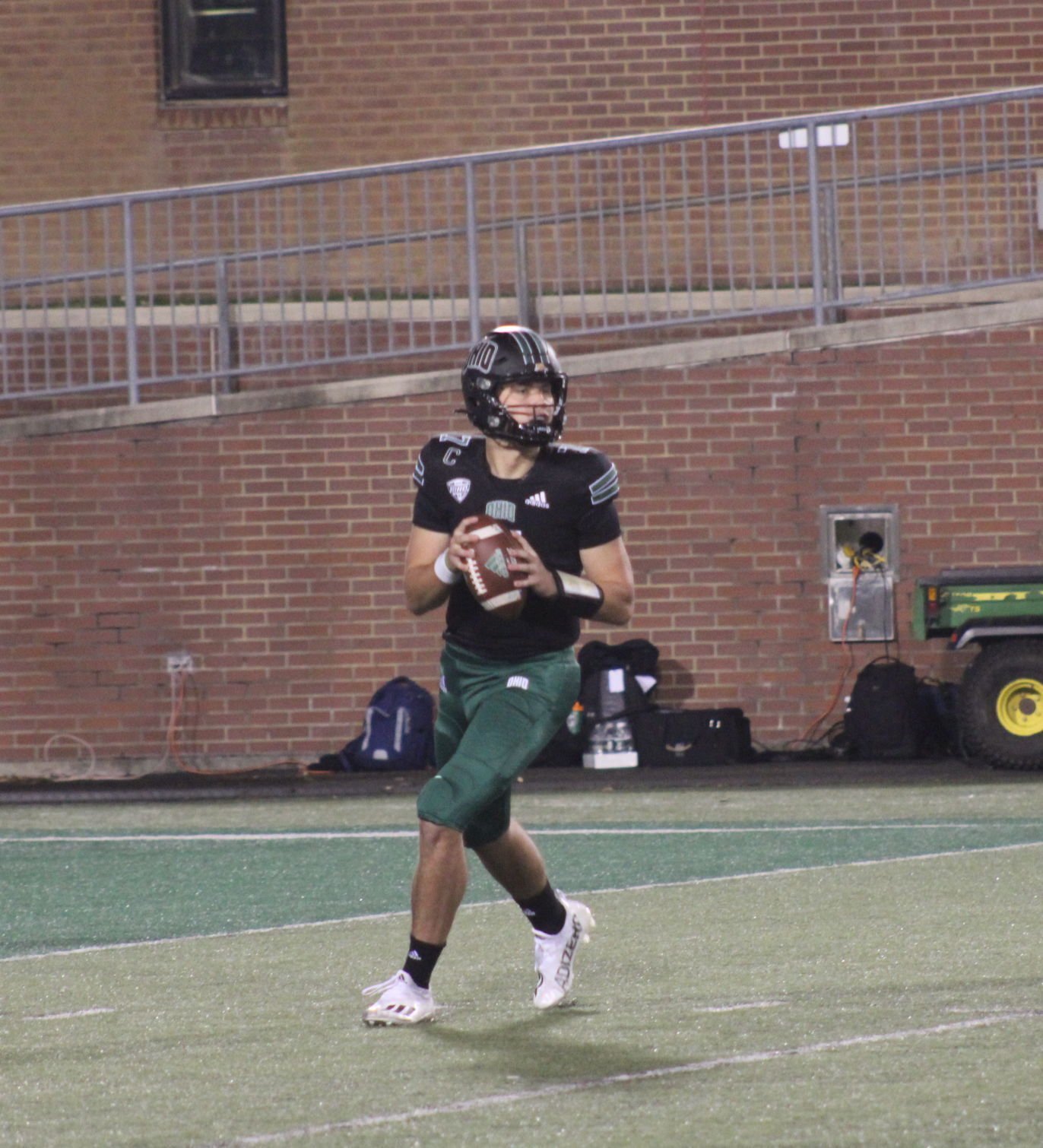 Ohio hung around with Toledo for more than half of Tuesday’s Mid-American Conference football game.

Once Toledo’s Bryant Koback took over though, the Rockets were well on their way to a victory.

The Bobcats were within 14-9 in the third quarter before Koback’s 55-yard touchdown run opened the flood gates for Toledo.

The Senior Night loss snaps a two-game winning streak for Ohio, which falls to 3-8 overall and 3-4 in the MAC.

Koback proved to be difficult to stop for Ohio’s defense. He rushed for 203 yards on 21 carries, also adding 19 yards on three receptions.

“He is a tremendous player; he has been for a long time here,” Toledo coach Jason Candle said. “He made some big explosive runs and picked up some tough yards in a game when safeties run blocking down there and meet him at the line of scrimmage. I am really proud of his effort and proud of how we ran the football tonight.”

“Hats off to Toledo, they’ve got a complete football team and going into the game I told the team that we would have to basically play our best four quarters of football to have a shot,” Ohio coach Tim Albin said. ‘We didn’t and we were in it. We just couldn’t make the plays that we made the last couple of weeks”

Ohio used both quarterbacks in Kurtis Rourke and Armani Rogers. Rourke completed 22 of 36 passes for 233 yards and a touchdown. Rogers didn’t attempt a pass, but rushed for 34 yards on seven carries.

Koback scored his first two touchdowns to give Toledo the lead. His first score came on a run of eight yards for a 7-3 Rocket lead with 9:07 left in the first half.

The Bobcats scored on the last play of the half, with Johnson’s 41-yard field goal as time expired cutting the Toledo lead to 14-6. Rourke’s 18-yard run on third-and-15 with four seconds left made the field goal possible.

The Bobcats called on a fake punt pass, with Jonah Wieland completing a 20-yard pass to Ryan Luehrman, advancing the ball to the Rockets’ 40-yard line.

Toledo’s defense stopped Rourke for a 2-yard gain on third-and-three, and Ohio opted to kick a field goal on fourth-and-one. Johnson’s 32-yard field goal was good, capping off a 15-play, 61-yard drive that ate 8:27 off the clock.

Ohio trailed just 14-9, but the Rockets quickly regained the momentum.

They went for a fourth-and-one at their own 45-yard line. Koback found an opening up the middle, racing 55 yards for a touchdowns.

The Bobcats went three-and-out on their next possession, and it took Toledo only one play to find the end zone.

Finn completed an 85-yard touchdown pass to Matt Landers, putting Toledo ahead 28-9 with 3:28 left in the third quarter.

The Bobcats recorded a pair of late-game touchdowns. Bangura’s 4-yard run capped off a 75-yard drive, pulling Ohio within 35-16.

The Bobcats honored their senior class before the game, a group that dealt with the pandemic shortened season a year ago.

“I couldn’t be prouder,” Albin said. “After the pandemic, almost all of them came back to fight for this program and this university. They’ve done that every day with class.”

It was also the final home games for Ryan and Adam Luehrman. The 2015 Athens High School graduates have been in the Bobcats’ program for the last season seasons.

“Every time I walk out onto the field, I look at that hill,” Ryan Luehrman said. “I see kids playing around, running around, and I just think was me. I was dying to hop over that fence and play football on this turf and to be able to do that I’m forever grateful. It really hasn’t hit me yet playing my last game at Peden Stadium.”

The Bobcats have one final game remaining in the 2021 season. They will travel to Bowling Green on Friday, Nov. 26, for a 12 p.m. kickoff.