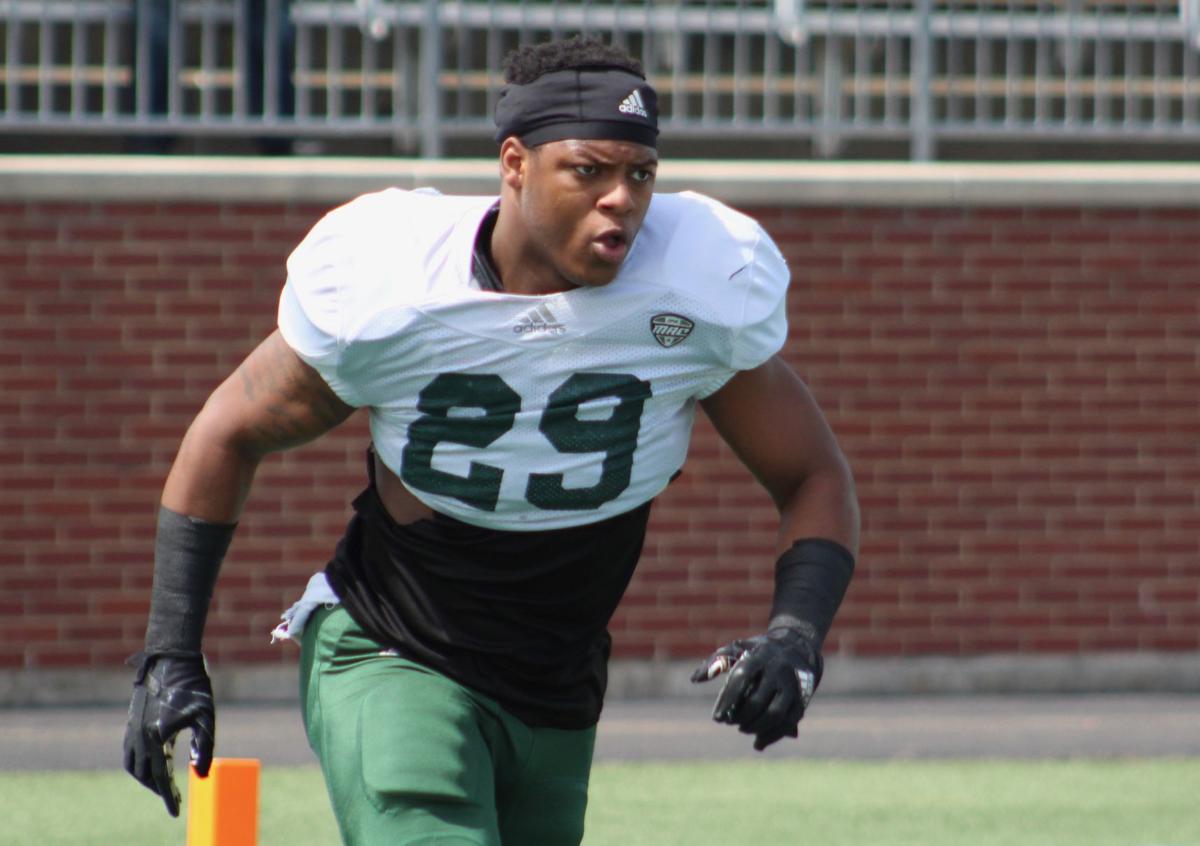 Oho sophomore T.J. Robinson is one of several players vying for a spot in the Bobcats’ rotation at linebacker in 2019. 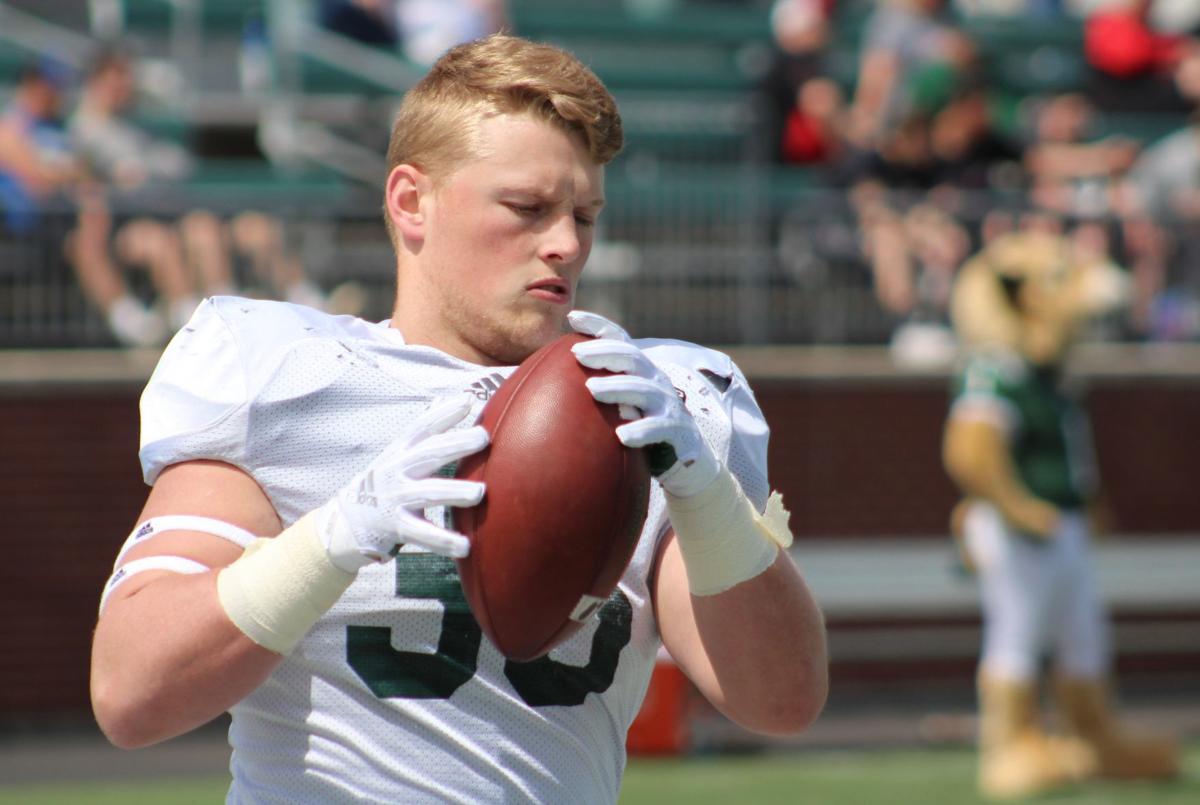 Oho sophomore T.J. Robinson is one of several players vying for a spot in the Bobcats’ rotation at linebacker in 2019.

Editor’s Note: This is the sixth in a nine-part series outlining the 2019 Ohio Football roster. The series will break down nine parts of the program in the coming weeks, with a look at who returns, what’s changed, and what’s to come at each position. The series continues today with a look at the Ohio’s linebackers.

This story appears in the Thursday, June 27 newspaper on Page B1.

On paper, it shows the Bobcats lost two starting linebackers, one of the best playmakers from the defense, and have a fresh-faced twenty-something as a first time FBS assistant coach overseeing the position.

Nate Faanes, that fresh-faced assistant taking over the position group, isn’t sweating it. Why? As a GA over the past couple of years with the group, he knows exactly what’s coming down the line next.

“We got the older guys who have been through it all before,” said Faanes. “We got experienced guys.

“And then we got the young pups who are hungry to make an impact.”

“You win with smart players,” Faanes said. “And we got some.”

But can the linebackers develop the cohesion the group showed in the last half of 2018 when the defense — as a whole — took a step up and played like one of the MAC’s best?

Ohio will have to replace to big cogs in the rotation. Evan Croutch was the best player in Ohio’s front seven last season and finished with team highs of 79 tackles and 11.5 tackles for loss — and eight passes defended — as a fixture on the weak side. The other starting OLB — strong side standout Tyler Gullett — won the job midway through last season and helped the Bobcats stay away from poor run-leverage defensive personnel groupings.

But Ohio can plug in two veteran pieces to fill those immediate shortcomings. Senior Eric Popp — a stout 6-0 and 233 pounds — has played in each of the previous three seasons and last year was the regular backup on the weak side. Fourth-Year junior Dylan Conner started 2018 as the starter at SLB, and has two full seasons as a rotational player on the defense. He’ll be the first up in the ‘cover’ linebacker spot.

In the middle, Ohio returns another fourth-year junior in Jared Dorsa (6-2, 230). Dorsa got better with each game in 2018. As the calendar rolled on, Dorsa added more and more impact plays to his resume. What started as a ‘Let’s see if this guy can do it?’ proposition became ‘Here’s our starter in 2019’ reality by November.

“It’s part of what’s great with the college game,” Faanes said. “Guys have been working and getting better and now it’s their turn. We think they’re ready.”

The depth is more unproven. Sure, fifth-year senior Austin Clack — who also had a handful of big special teams plays in 2018 — is back to help in the middle, but first-time contributors will be called on to be backups.

Sophomore T.J. Robinson could be a good run-stuffer on the weakside. Keye Thompson might be a future starter in the middle. Bryce Houston has shown flashes on the outside, and Jack McCrory was nearly on the field in a handful of games last year. But Thompson, Houston and McCrory are all redshirt freshmen who have yet to show up on game days on a regular basis.

Then there’s Cannon Blauser, a true freshman who enrolled early and took part in spring camp. He didn’t look out of place. Another redshirt freshman, Jeremiah Wood, has converted from safety to SLB and took a crash course in the position this spring

So the stage is set for Thompson, Houston, McCrory, Wood and perhaps Blauser to become special teams contributors this fall. If needed, they’ll be repping as backups. It’s their turn to get to the game on a limited basis, just like Dorsa, Popp, Clack and Conner did a couple of seasons ago.

The young group is a step quicker, a touch more explosive than their older counterparts. They need reps however. It’s coming, Faanes said.

“We’ve done a good job over the last couple of years of having balanced groups,” the coach explained. “We don’t have to throw in guys who aren’t ready yet.

“We have older guys, and younger guys trying to get where they’re at. It’s worked out well for us.”

Popp has the biggest shoes to fill, but is well seasoned with two years of being a special teams regular and a part-timer on the weakside. Conner began 2018 as the starter as the strong side (cover) linebacker but was supplanted by the middle of the season; Again, he has plenty of experience and the smarts to be a good one. Dorsa was a first-time starter in 2018, and came on in the last half of the season. Dorsa finished with 56 tackles, 3.5 tackles for loss, two interceptions, two pass breakups and a forced fumble. Virtually all of the havoc plays came in the final six games.

Croutch was Ohio’s best player in the front seven a year ago and led the way with 79 tackles, 11.5 tackles for loss and added four sacks. His improvement in the passing game was noticeable as well. Gullett passed Conner and became the SLB starter midway through ’18. Brunson graduated and elected to not return for a fifth-season.

Robinson lost most of last season to a high ankle sprain but has the makeup to excel as a run-stuffer from the weak side. Clack is another experienced hand, and spelled Dorsa last year in the middle. Wood is making the switch from safety to the strong side spot, and how well he adjusts and adapts could go a long way to deciding if Ohio will continue to rely on its base personnel much more than a nickel look defensively.

The young guns here have talent and — thanks to Blauser’s early enrollment — have all had a chance to grow and adapt to the college game. I think you’ll see all four on the field with some special teams work in 2019. Thompson sat out most of the spring rehabbing from injury, and Houston seemed the closest to making an impact with the defense this fall.

With Ohio’s dedication to recruiting the position — the Bobcats have inked three LBs in each of the last two classes — it’s tough to envision a scenario where this group will impact game days.

Blauser enrolled in time for spring camp and has thus set himself up with a chance to contribute in 2019; The First Team All-Ohio Division I selection had a mid-three star grade and offers from Cincinnati and Louisville. Johnson comes from a power program, and one that Ohio has had success with in the past in Pick. North. Kelly was a three-start recruit and had 10 other offers. Given the depth and experience at each of the LB spots, it’s likely a development year for Johnson and Kelly.

Bobcats hoping for a 'reload' up front