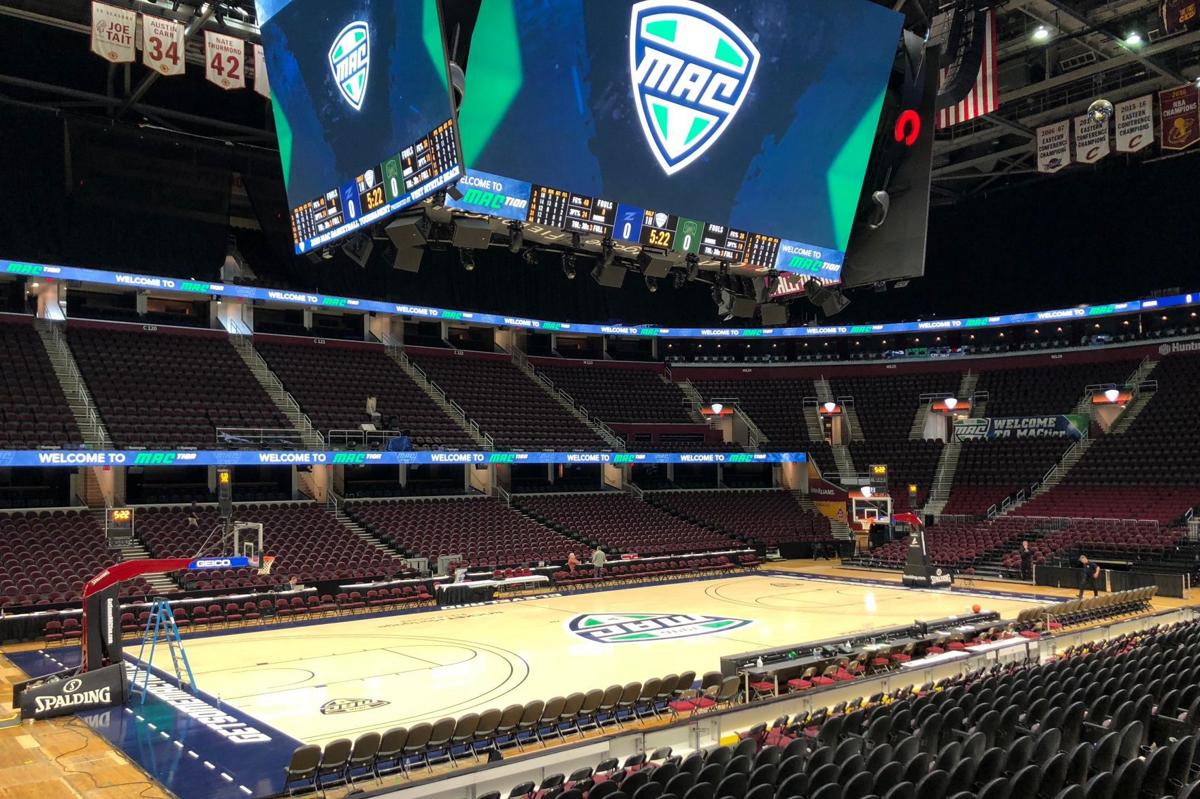 The floor and seating area at Rocket Mortgage FieldHouse in Cleveland is empty shortly following the announcement at midday on Thursday that the Mid-American Conference cancelled the remainder of its 2020 Men’s and Women’s Basketball Tournaments. 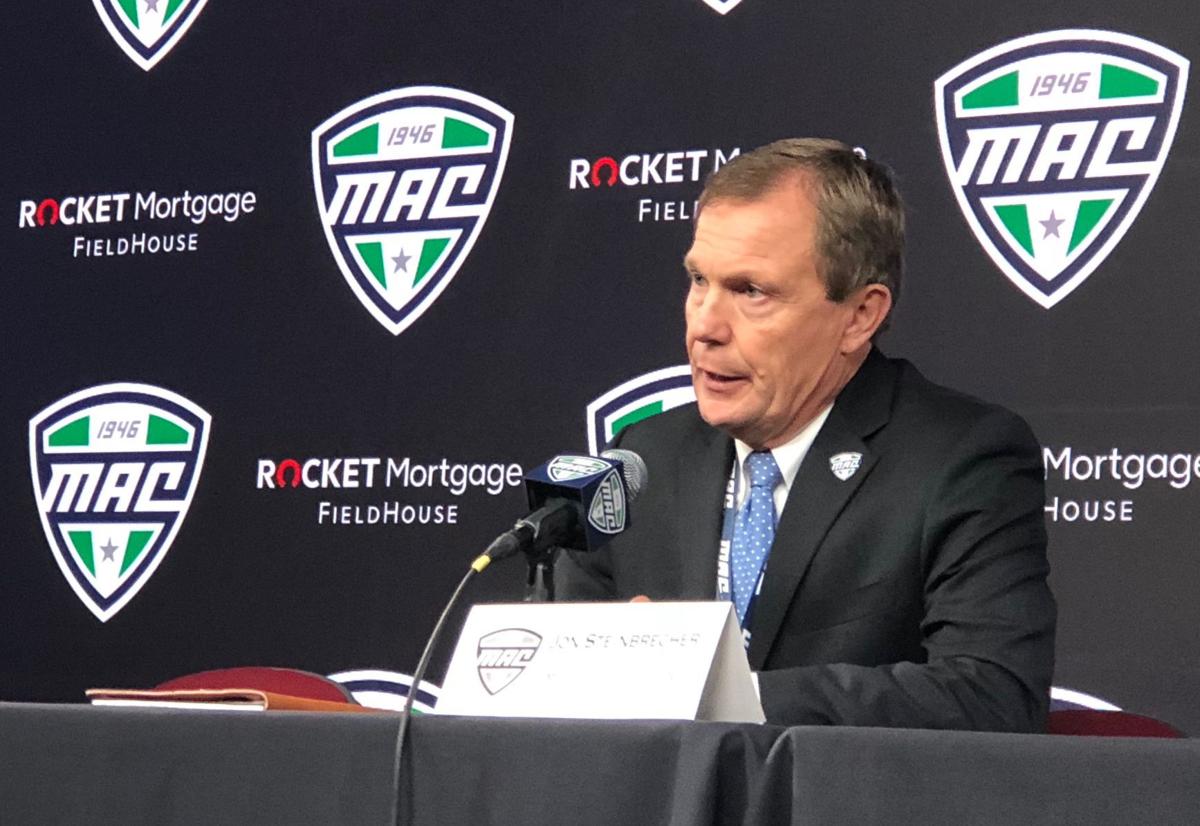 The floor and seating area at Rocket Mortgage FieldHouse in Cleveland is empty shortly following the announcement at midday on Thursday that the Mid-American Conference cancelled the remainder of its 2020 Men’s and Women’s Basketball Tournaments.

CLEVELAND — It was unthinkable a week ago.

It seemed liked a worst-case scenario a couple days ago.

It was inevitable by Thursday morning.

The Mid-American Conference canceled the remainder of its 2020 Men’s and Women’s Basketball Tournaments Thursday afternoon, part of a nationwide trend as local, state and federal governments — and all manner of sports leagues — struggle to come to grips with the impact and reach of the Coronavirus (COVID-19).

At 12:10 p.m. MAC Commissioner Dr. Jon Steinbrecher addressed the gathered media at Rocket Mortgage FieldHouse to state what most had expected since Wednesday evening, when the National Basketball Association suspended its season followed the positive test for the virus by a current player.

Steinbrecher had been in contact with the MAC’s athletic directors and presidents all week as the league discussed what to do as COVID-19’s growth apparently exploded across the country. On Tuesday, the MAC became the first Division I conference in the country to announce it would hold its conference tournament without general admission spectators.

By Thursday, it had been decided that would be not be enough.

Earlier Thursday morning, several other conferences had decided to outright cancel their conference tournaments — including the Big Ten, the AAC, the ACC, Big 12, Conference USA and the Big East.

“As you started to see this morning…a number of conferences have made the decision to cancel,” Steinbrecher said. “We have come to the same conclusion and we are cancelling our event.”

The MAC held its women’s quarterfinal round on Wednesday at the FieldHouse — four games — with only essential personnel and tightly-trimmed guest lists permitted entry. On Thursday, the Ohio University and University of Akron men’s teams were in the building getting ready for a proposed 12 p.m. tip-off for the first of four games set for the men’s quarterfinal round.

The tip-off was postponed to 1 p.m. as the MAC instituted medical checks on both teams’ travel parties, and as Steinbrecher and school administrators weighed the decision to cancel.

Temperature readings were taken from both teams’ travel parties, and all players were given the option to back out of playing if they so desired.

“We wanted the students to have a voice to continue in this on whether or not they wanted to continue,” Steinbrecher said.

Ultimately, it didn’t matter. The MAC called a 12:10 press conference, and shortly thereafter the decision to cancel was made.

Ohio head coach Jeff Boals said, to his knowledge, there were no individuals who tested abnormally during the brief screening procedure. His team took the floor twice — the first at about 10:45 a.m. and then again around 11:50 a.m. — with the intention of preparing to play.

“They put some parameters in before we played about testing temperatures just to kind of see if anyone had a fever, if they did there would be further screening,” Boals said. “No player from either team had a temperature.

“Then it was a 1:03 tip. Dominos fell from there and a decision was made.”

This will be the first year since the MAC Tournament began (1980) that it will not be completed. Steinbrecher said the regular-season champions will received the conference’s automatic bids into the NCAA Tournament, if that event is held. On Wednesday, the NCAA said its annual ‘March Madness’ event would be held in empty arenas — under admission guidelines similar to the ones the MAC created Tuesday.

But as virtually every major conference still playing announced the cancellation of its own tournament on Thursday, with Duke even declaring it wouldn’t attend the NCAA Tournament if it did occur, there’s a growing sense there will be no more major college basketball in 2020.

Steinbrecher said he had been in “constant contact” with the NCAA but could offer no guess about what the NCAA would decide.

“I don’t have an answer on that,” Steinbrecher said. “We have no information on what their decisions might be going forward.”

“The way these tournaments have gone, and the NBA and Major League Soccer, I would be hard pressed to say it would be,” Boals said.

“I’m like any other person. I’m a fan. I love college basketball. I like watching NBA Basketball,” he added. “But I think at the end of the day there are things more important than an NCAA Tournament or whatever else it may be.”

The MAC’s decision was impacted by the news in the NBA from Wednesday that two current players, Rudy Gobert and Donovan Mitchell of the Utah Jazz, had tested positive for the coronavirus. The Jazz, playing the Cavaliers, had been in Rocket Mortage FieldHouse on March 2.

Steinbrecher said the MAC would have closed down the NBA locker rooms, including the one the Jazz used, had they continued, though the areas had been sanitized regularly and they believed it was low risk.

“We got through an extensive sanitation process after every event,” Cavs CEO Len Komoroski said. “There were actually five events that occurred since the Jazz were in town prior to the MAC conference coming here as well, so that process has been repeated continually throughout that.

Coupled with time time between the MAC Tournament and when the Jazz were in Cleveland, Komoroski said “would suggest that the risk was very low that the affected player actually had contracted it and had that while he was in Cleveland.”

Komoroski added that any workers — ushers, ticket takers, security, etc. — who would have worked the event would be compensated as if they worked despite the cancellation.

Following news of the cancellation, the Bobcats were to leave the arena, meet at the team hotel and figure out what was next. Ohio University, earlier this week, announced a suspension of all group activities and face-to-face learning until at least March 30.

“We still have online situations, and guys can go home if they want,” Boals said. “We’re going to go back to the hotel, regroup, get a meal. And see who’s going to go where.”

Steinbrecher said the decision was the right one, and hasn’t yet thought about the — to quote Boals — unprecedented events of the last few days. Steinbrecher said a decision about the spring sports season has yet to be made, but should come within the next week.