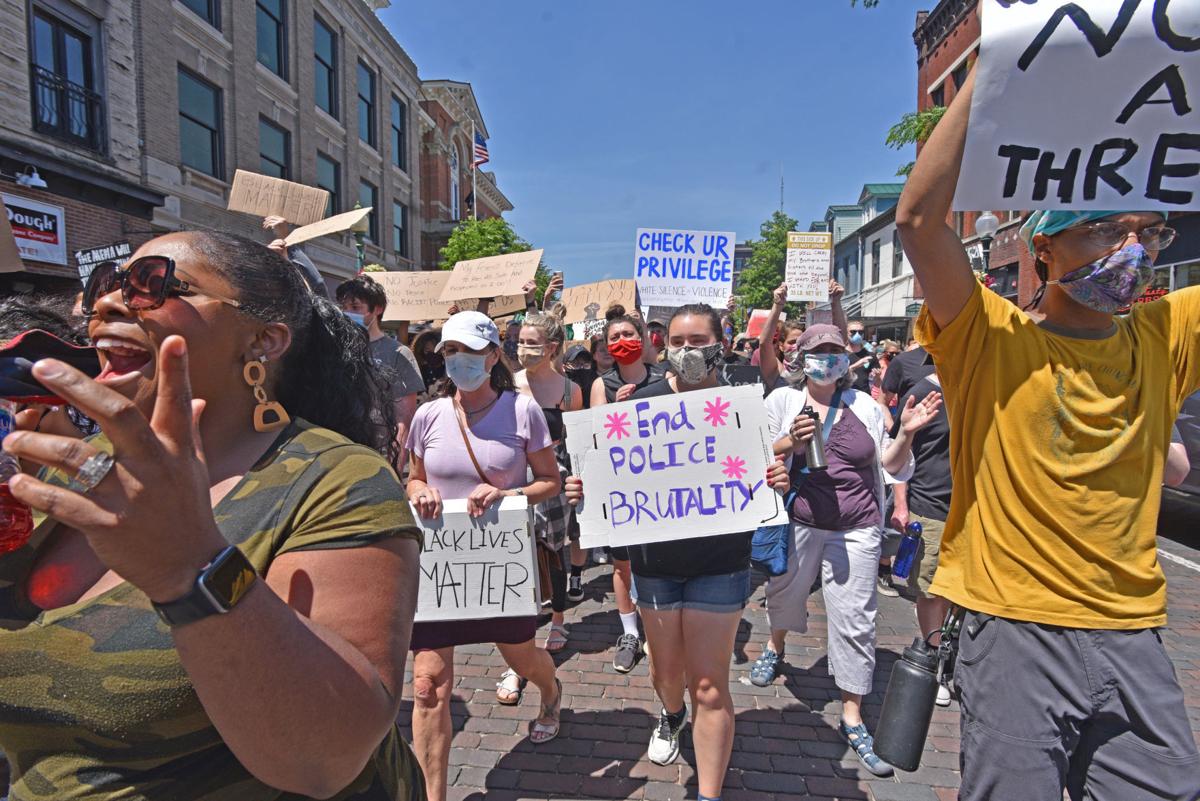 Some held the signs, some chanted, and others sang as a large group of protesters marched against police brutality. 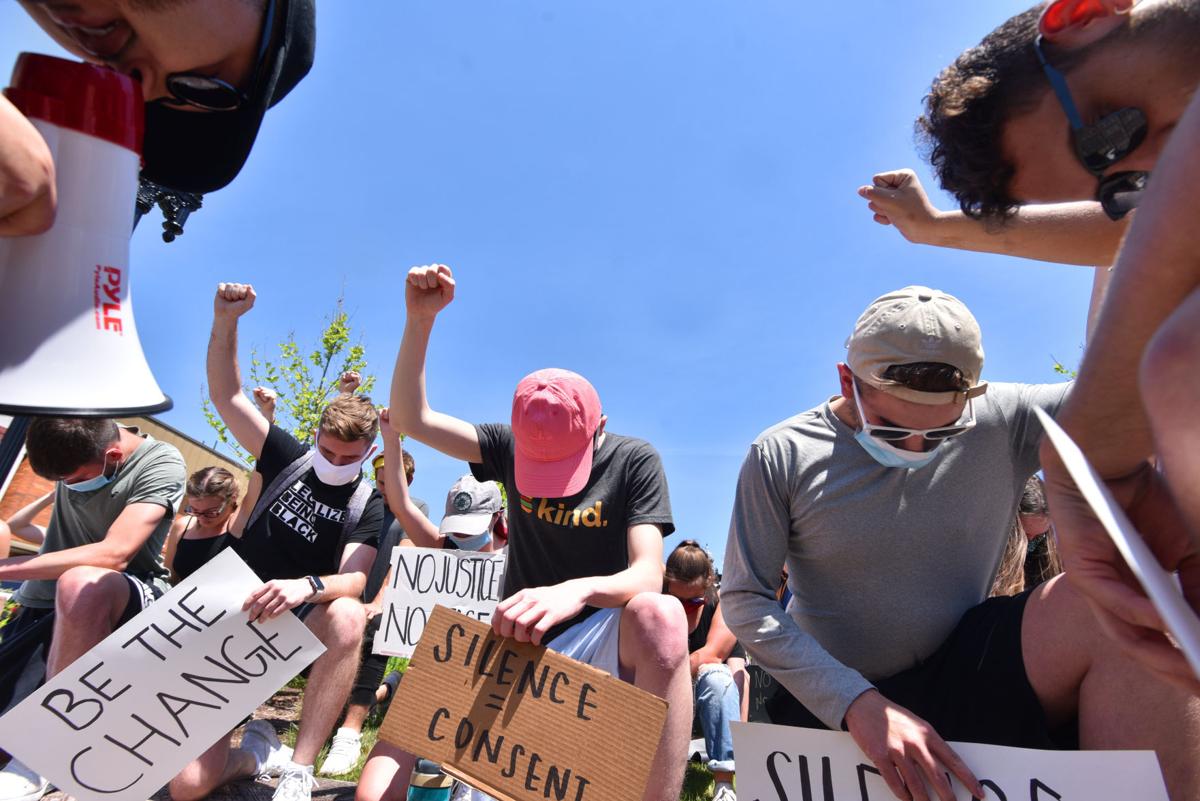 Moment of Silence: A large group gathered at the Nelsonville Square on Tuesday to protest the death of George Floyd and police butality against blacks. The rally organizer, Cameron Chilcote, asked for a moment of silence during the event. There was also a peaceful march down Canal Street. Cameron grew up in Nelsonville and graduated from Nelsonville-York High School. 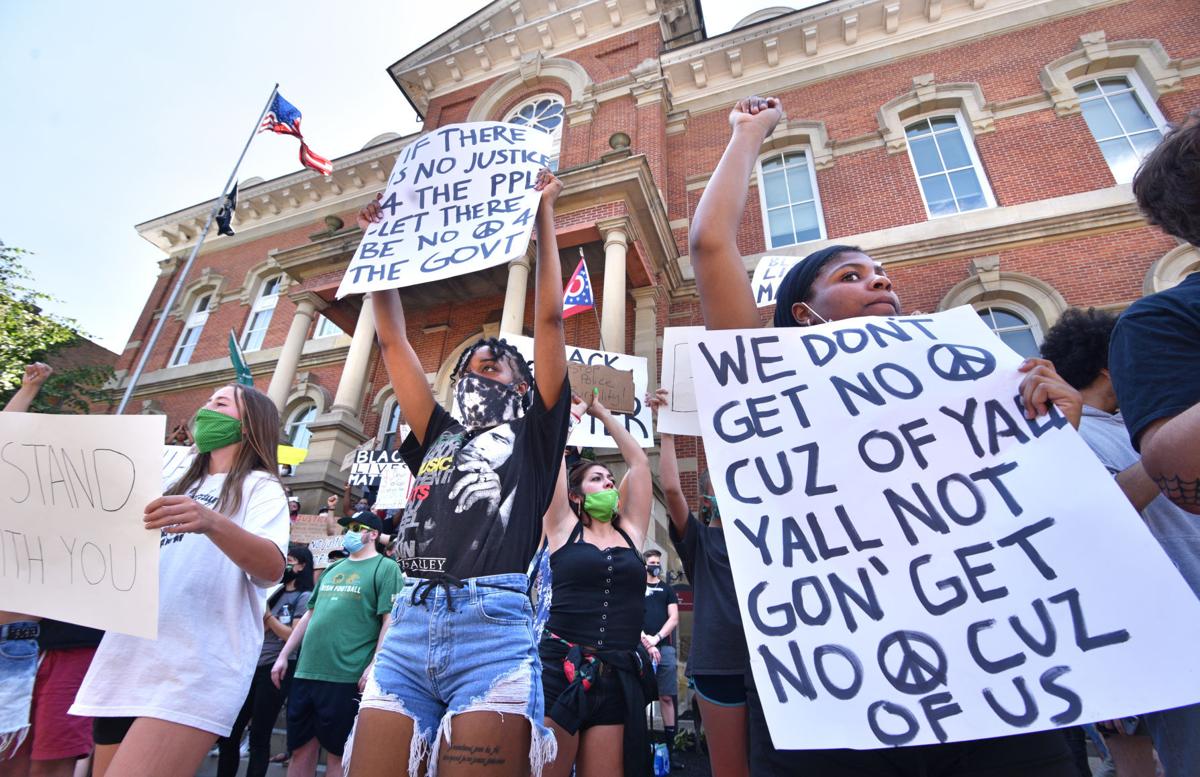 Protesters hold their homemade signs in front of the courthouse. (June 2, 2020)

Some held the signs, some chanted, and others sang as a large group of protesters marched against police brutality.

Moment of Silence: A large group gathered at the Nelsonville Square on Tuesday to protest the death of George Floyd and police butality against blacks. The rally organizer, Cameron Chilcote, asked for a moment of silence during the event. There was also a peaceful march down Canal Street. Cameron grew up in Nelsonville and graduated from Nelsonville-York High School.

Protesters hold their homemade signs in front of the courthouse. (June 2, 2020)

Two protests were held in Athens County on Tuesday afternoon, drawing crowds to both downtown Athens and the Nelsonville town square. Both protests joined the countless demonstrations worldwide that are speaking out after the death of George Floyd, the unarmed black man who was killed after a white police officer knelt on his neck for nearly nine minutes on May 25.

In Athens a crowd of more than 500 people lined the streets surrounding the Athens County Courthouse. The assembled crowd held signs and chanted statements like, “Black Lives Matter”, “Say his name; George Floyd” and “What do we do when black lives are under attack? Stand up, fight back.”

During the protest a speaker system was made available for protesters who wished to speak to the crowd. Ohio University student, KeShawn Mellon, used the opportunity to call on the crowd to observe eight minutes of silence to honor Floyd’s memory.

“He couldn’t breathe for eight minutes. Can you imagine?” Mellon asked. “He did not deserve to die, none of us do.” Following Mellon’s request crowd members who were able took a knee in silence, with many protesters raising their fists in solidarity.

During the protest the group marched twice down Court Street past OU and back up Washington Street, returning the their position at the courthouse. The Athens City Police stopped traffic on Union Street and Court to allow the protesters to safely march.

The protest was a peaceful one, much like the similar protests held in Athens on Saturday and Sunday. Protesters encouraged one another to obey the laws set in place and to not disrupt traffic aside from the marches. Event organizers reminded the crowd that they did not have a permit to be in the street, and doing so could result in an arrest.

Throughout the three hour demonstration protesters were seen taking care of one another. Many brought extra masks, hand-sanitizer and water bottles to share with their fellow protesters. Athens resident Dante Caldwell brought a case of water to share, when asked why he simply shrugged that he was a boy scout. Caldwell was pleased with his turnout for the protest.

“This is the first time in a long while that I’ve seen everyone come out together peacefully. I love the turn out right now,” Caldwell said.

During the event many people drove by honking their horns in support and holding signs out of vehicle windows. This seemed to be a particularly popular activity with families, as many young children held signs supporting the protests as they drove by, eliciting excitement and cheers from the crowd.

The Nelsonville protest was organized by resident Cam Chilcote, via Facebook.

“I never thought this community could come together this quickly or this passionately,” Chilcote said. “We organized this peaceful protest literally in 24 hours.” Chilcote estimates that around 60 people took part throughout the course of the demonstration.

“All in all, it was a successful day full of peace, love and unity. I’m super thankful,” Chilcote said.

The protests are set to continue, with a protest in Nelsonville announced for Sunday, June 7 at 5 p.m. in the town square.