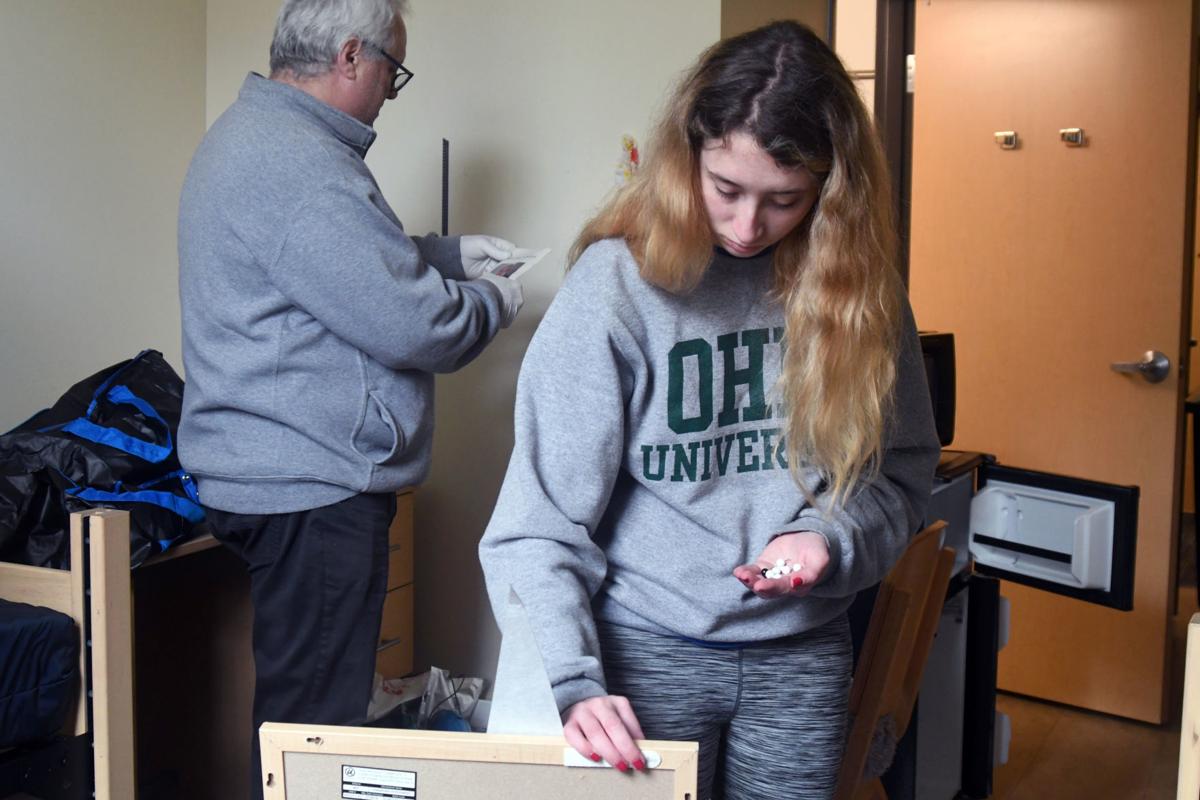 Eileen Eidelberg packs her cork board while her father, Joel Eidelberg takes down wall decorations inside Eileen’s dorm room in Sowle Hall during move out on Satuday, March 21. 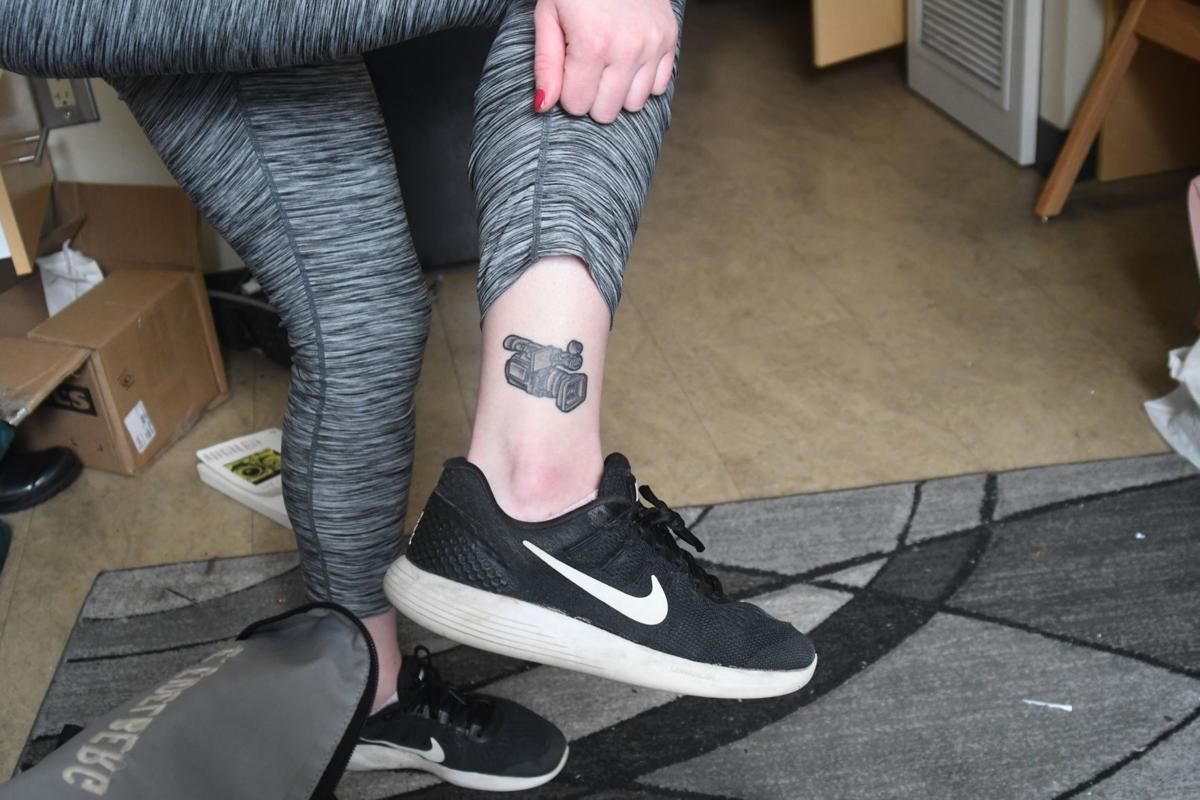 Eileen Eidelberg packs her cork board while her father, Joel Eidelberg takes down wall decorations inside Eileen’s dorm room in Sowle Hall during move out on Satuday, March 21.

Students at Ohio University were in the middle of enjoying their spring break when OU announced that the break would be extended due to the growing COVID-19 pandemic. As the situation worsened, on March 13 the extension turned to a suspension of all in-person classes for the rest of the semester.

Since that announcement, OU students have been returning, a few students at a time, to empty their dorm rooms.

“I was expecting to come back this next week,” OU sophomore Eilleen Eidelberg said. “It’s a little overwhelming honestly. It’s crazy to think we’re leaving this early.”

Eileen, along with her father Joel Eidelberg and a family friend, made the six hour from their home in Herndon, VA, to pack up Eileen’s dorm room in Sowle Hall on Saturday, March 21. Sowle Hall was quiet while they were packing up the room, the Eidelberg’s were only people on Eileen’s floor.

As Eileen sorted through a chaotic desk, she kept saying how she hadn’t expected to move out of the dorms already. Her roommate had already moved her things out of the dorm before Eileen arrived. The two were not able to clean the dorm together as they expected.

“I kind of wish they would have told us before spring break,” Eileen said. “I have senior friends that I will never see again because they are graduating.”

“That’s what homecoming is for,” Joel said. “You communicate, you keep in touch.”

Not being able to say goodbye to friends has been the hardest part for Eileen, who has made friends at OU from all over the country. Now everyone is in lock down.

“Being in college and having all of this happen, you just don’t realize that this could be the last time you see people,” Eileen said. “You don’t realize it’s the last time until it’s happened. I’m glad I’m not a senior, because I wouldn’t be able to have graduation.” On March 18, OU officially postponed spring graduation.

Joel was quick to point out to his daughter that no one could have predicted the situation.

“The university is learning on the fly like everyone else,” Joel said. “There is no great way to do this, but you get it done, get through this and remember that we are living through a historical moment.”

The pandemic has altered not just the semester for Eileen, but possibly also her summer internship.

“I’m not sure if it’s going to happen,” Eileen said, who is currently studying Integrated Media in the Scripps College of Communication. Her internship interview with the NFL Player’s Association in Washington D.C. has been postponed.

“My biggest goal is sports cinematography,” Eileen said. In fall 2019, she took part in a program called, “Gridiron Glory”, where she filmed local high school football games across Southeastern Ohio.

Eileen’s passion for film is evident by the dorm room decorations she packed, strips of film and photos that hung on the walls. She also proudly showed off her tattoo of a video camera – something she purposefully got at Decorative Injections in Athens instead of her hometown.

“If I got it at home they wouldn’t have let me get a tattoo,” Eileen said, which caused her father to laugh and agree.

Eileen’s film classes are the biggest uncertainty for her at the moment.

“I was supposed to film on 16 mm film. I don’t know what we’re going to do for that class now. That was the whole plan for the semester,” Eileen said.

Many OU students and professors are currently trying to navigate the new normal for the rest of the semester, as online classes officially began on Monday, March 23.

“We’re just going to figure it out as we go,” Eileen said.

When Eileen returns to OU in the fall, she hopes that classes will be back to normal, and she will be able to move into her new apartment.

Saturday’s trip to Athens was bittersweet for the Eidelberg family. Visiting Athens is ordinarily a highlight, as Joel is an alum of the university.

“It’s weird to come to campus this time of year and see it so empty,” Joel said. Despite the closures throughout Athens, the group still planned on getting take out from Jackie O’s, an old favorite of the alum who has warm memories of the university.

“I’m a grad of the College of Communications at OU, it has served me well enough I should say,” Joel said.

Despite Joel being an alum, Eileen hadn’t spent much time in Athens prior to a three-day communications workshop when she was in high school where she was able to stay in the dorms for the first time.

Joel said that he fell in love with OU after visiting his older brother at OU. Though Eileen may be experiencing a rough time with college this semester, the family tradition is strong for the Eidelberg’s.

“She loves it. Being an alum and having my daughter go here, it’s kind of special,” Joel said.